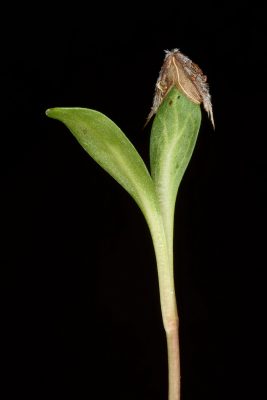 5. Urginea maritima and the porcupine 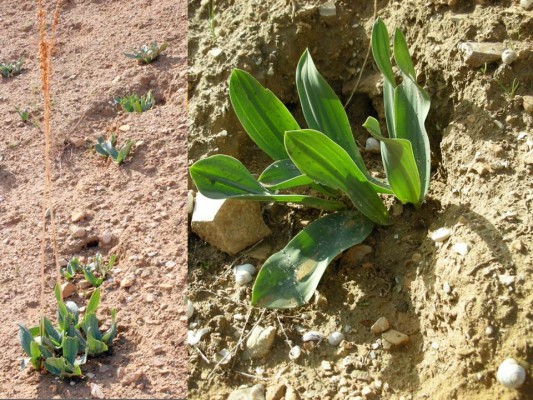 Fig.8.1.34: Urginea maritima, the bulb of which was consumed by porcupines, grow in small depressions in the sea level area

One of the most interesting companions of S. asphaltica at sea level area is [Urginea maritima]. This plant grows in all other parts of the country, but here it grows in depressions (Fig. 8.1.34). During my teaching years I visited there at least twice every year. Yuval Sapir (then a teaching assistant) drew my attention to a hole in the soil with remnants of an eaten U. maritima bulb. According to the conclusions of Prof. Y. Gutterman’s study of consumption of geophytes by porcupines – Urginea maritima is not eaten elsewhere. The authors E. and H. Hareuveni, the authors of a book (in Hebrew) on Urginea maritima and [Asphodelus ramosus] state that there are places where Bedouin and farmers use it to make a poison for exterminating mice; this is why they call it “basal farr” (= the mouse’s bulb). When the porcupine eats the bulb many buds sprout together. We had to learn the life cycle of the plant throughout the whole country carefully, in order to understand its importance in the [http://flora.huji.ac.il/browse.asp?action=content&keyword=%D7%A9%D7%99%D7%9E%D7%95%D7%A9%D7%99%D7%A6%D7%9E%D7%97%D7%99%D7%9D%D7%981 Suaeda asphaltica] plant community.

In a short note I wrote about it, I drew attention to the fact that only in this area are there porcupines that eat Urginea. I did not directly observe porcupines in this area. During the winter of 2012 I arrived at the Suaeda landscape in the sea level zone and again photographed the Urgina that grew in the depressions made by the porcupines, Fig. 8.1.34. The Bedouin ‘Issa who waits with his camel (shoushi) for tourists to come, became interested in the reason for my presence. I asked him if he saw porcupines (“nees”) eating this bulb. His first response to this question was, “Are you a Bedouin?” He demonstrated how the porcupines dig with their “hands” to expose the bulb and eat it. Then he asked me for the Bedouin’s plant name of the Urginea. I forwarded the question to my memory cells, where bits of Hareuveni’s book are present, and answered “suheil” (the U. maritima inflorescences emerge when a star carrying this name in Arabic appears in the southern part of the sky). This answer was accepted by ‘Issa with a statement that he was now assured that I am a Bedouin. Needless to say I was very happy.

6. Extreme desert on the Lisan formation of the Dead Sea Valley

At a short distance from the Sea Level stop on highway No. 1 we arrive at the junction of highway 90. Near the bus stop is a wall of the soft rock that makes up considerable parts of the Dead Sea Valley – the Lisan formation. It is a fine-grained rock and from the vegetation distribution aspect it is a saline soil with scant vegetation. Annual halophytes such as [Mesembryanthemum nodiflorum], [Tetradiclis tenella], and [Aizoon hispanicum] constitute dominant patches in rainy years. The first two become red upon terminating their growth year and towards seed ripening. Their chlorophyll functioning ceases and their red pigments become prominent on all plant parts (Figs. 8.1.35, 8.1.36). We have written two scientific articles on this peculiar ecosystem (Danin, 1976; Danin & Barbour, 1982).

An interesting ecosystem with many inter-dependent stages in this area is that of the microbiotic crust. Cyanobacteria, lichens, liverworts, and mosses grow together and lead to changes in soil properties. The rocks of the Lisan formation are soft and become saline under the impact of rain water. In sites where leaching of the upper soil layer take place, a crust develops which looks like fissured soil (Fig. 8.1.37). The important components of this crust are the filamentous cyanobacterium Microcoleus vaginatus which starts a sequence of changes (succession) that lead to amelioration of the soil.

In microscopic enlargement (Fig. 8.1.38), the cyanobacteria look like a bundle of green cells enveloped by a transparent sheath of mucilaginous polysaccharides. When it rains the wetted microbiotic crust swells and becomes slimy. The green cells creep from below the surface towards the light at the soil surface. The area becomes green (Figs. 8.1.39, 8.1.41, 8.1.42) and following desiccation it returns to its light-brown color (Fig. 8.1.43). The drying slime in a crust rich in filamentous cyanobacteria leads to shrinkage of the crust and in due course it tears into polygons (Figs. 8.1.39-8.1.42). As long as the crust is wet the cyanobacteria grow and expand horizontally. The arrow at the polygon margin (in Fig. 8.1.40) above the figure “8” indicates a fissure where the height of the two neighboring polygons on either side of it is equal. The arrow above the figure “10” indicates a fissure where the central polygon expanded in such a way that the crust cannot join together and the right surface grew above the left.

A similar process takes place near the arrow most distant from the ruler. Growth conditions at the elevated margins of the polygons differ from those in the center. In these places (Fig. 8.1.41), lichens start to develop; they look like large dark spots (near the arrow), and develop into a kind of a minute wall in the area that was formerly a fissure (Fig. 8.1.42). As the process continues lichens develop all around the polygons area (Fig. 8.1.43), and the lichens eliminate the polygon morphology of the area. The formerly flat area becomes rugged as a result of the biological process. Checkup of soil salinity reveals that in the first stages, when the area is flat, soil is saline. Soil is leached in rugged places (due to decreasing run-off and increasing water penetration into the soil). All the components of the crust contribute to the trapping of air-borne particles. As time passes, soil accumulates above the layers that were deposited by flood waters at the margins of the Lisan Lake (Fig. 8.1.44). Deterioration and erosion of the microbiotic crust has been studied and presented by Danin & Barbour (1982). 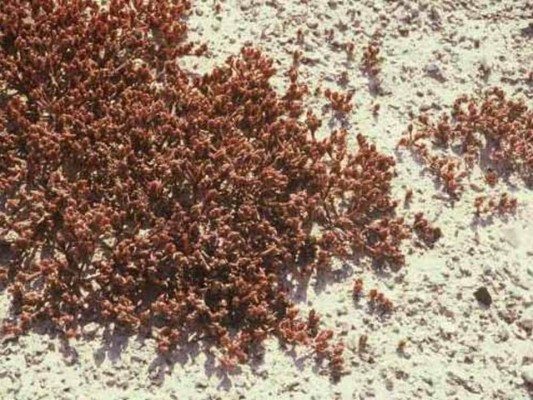 Fig.8.1.35: Mesembryanthemum nodiflorum after blooming and before desiccation in a local depression in a flat area with saline soil; Jericho Valley 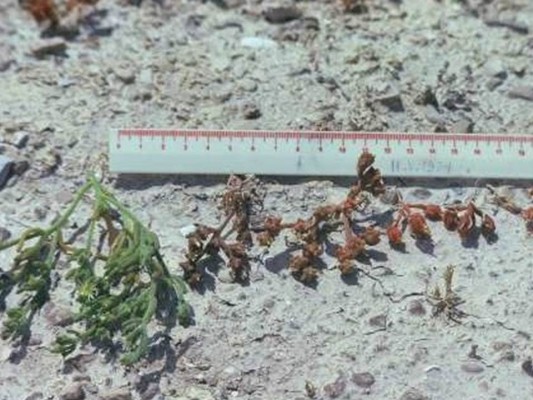 Fig.8.1.36: M. nodiflorum plants collected in a depression as in Fig. 8.1.35. The green plant bears flowers and was located at the depression center, thus receiving greater quantities of water than other plants and having better leached soil. The smallest plant on the right grew at the depression margin, where water supply was low and salinity was relatively high 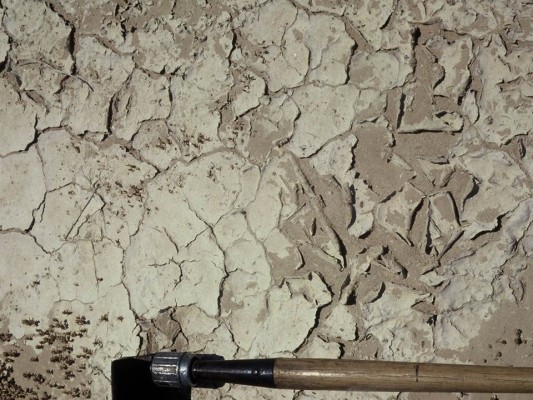 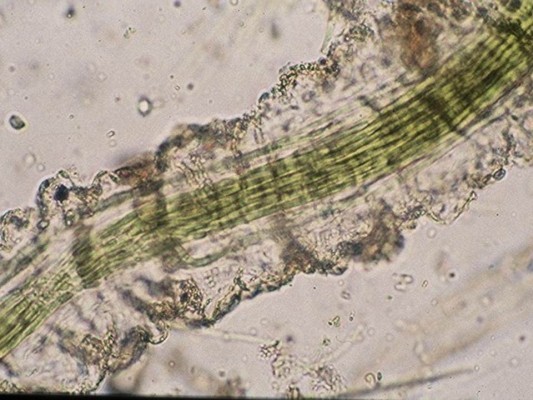 Fig.8.1.38: Microcoleus vaginatus, a filamentous cyanobacterium, which was raised on agar and photographed by Prof. Inka Dor. Filament diameter, including the polysaccharide sheath: ca. 100 microns 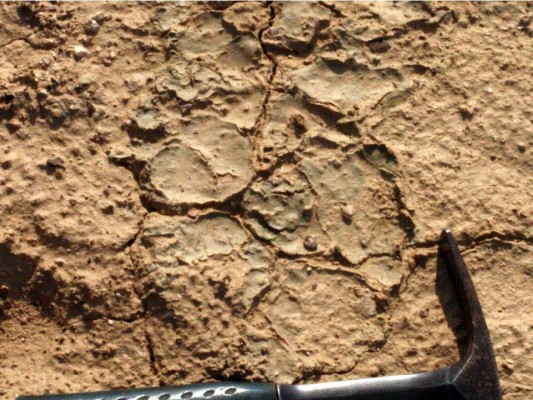 Fig.8.1.39: Cyanobacterial crust wetted by rain. The green cells reach the soil surface by creeping out of their sheaths 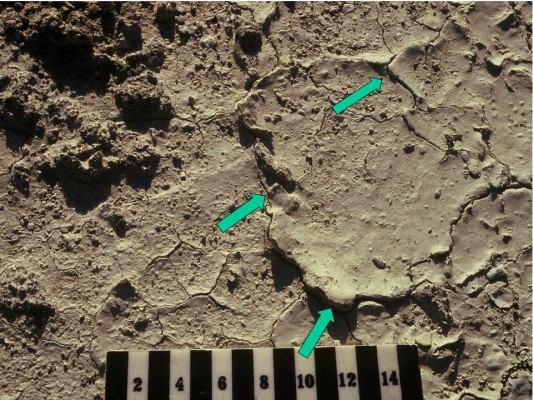 Fig.8.1.40: Polygon in a cyanobacterial crust after lateral expansion took place. It grew over and above the neighboring polygon (near the lower arrow), above the upper arrow and remained at the same level as the central arrow 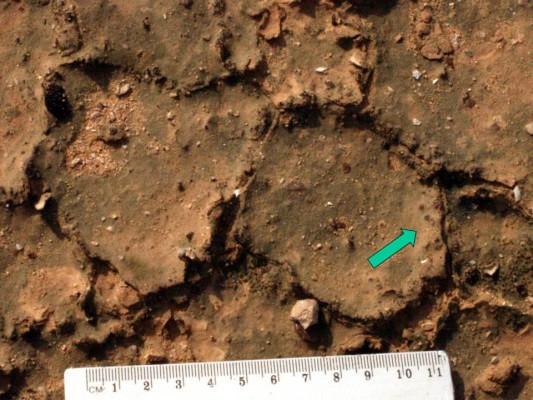 Fig.8.1.41: Wet and green cyanobacterial crust. Three lichens started to develop near the up-turned margins right of the arrow 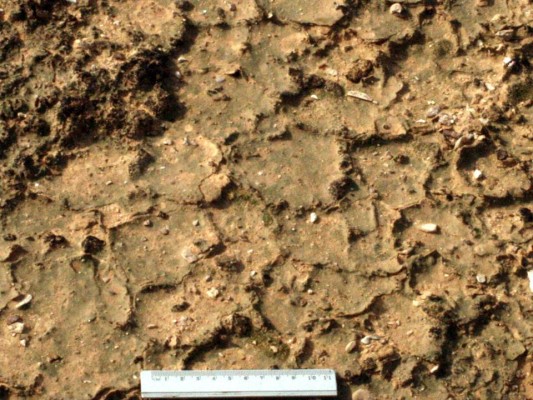 Fig.8.1.42: Wet and green cyanobacterial crust with many lichens which grew above upturned margins of polygons 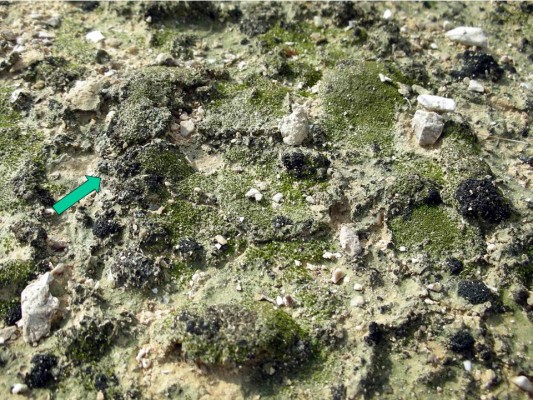 Fig.8.1.43: An old microbiotic crust with lichen “hills” along what was a polygon margin (near the arrow), and flat “lower land” populated by mosses and liverworts. Light colored patches of cyanobacteria remained here and there 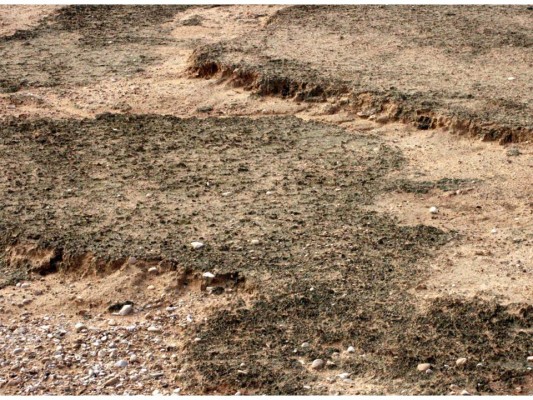