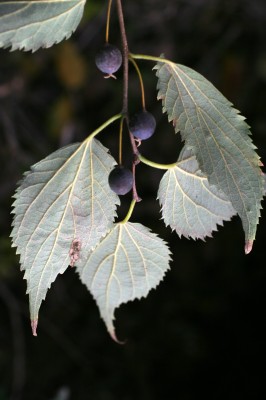 The Vegetation of Israel, Sinai and Western Jordan; Woodlands on Limestone

1.3 The Vegetation of Israel, Sinai, and western Jordan 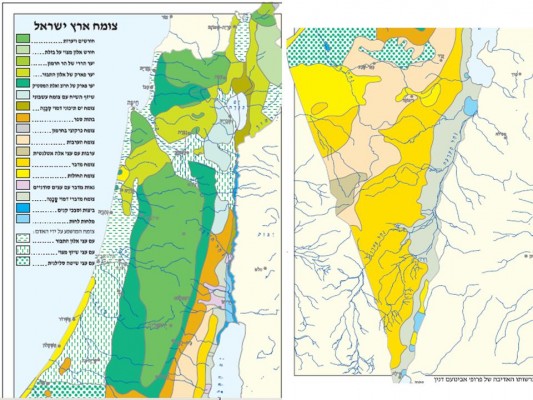 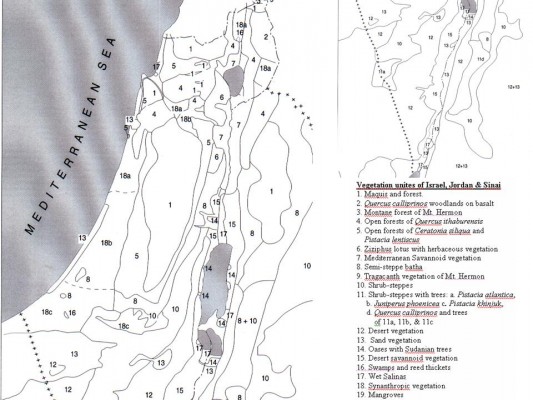 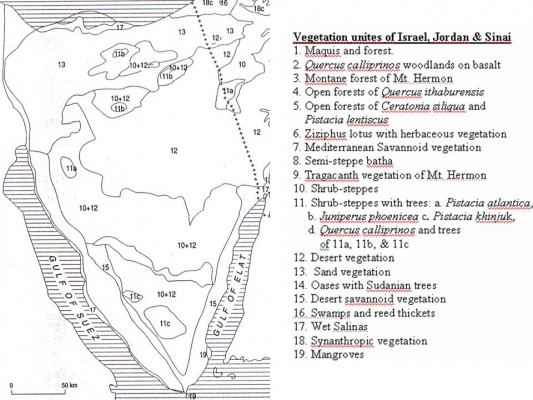 The principal woodlands of Israel are found in the mountains of Judea, Carmel, Galilee (Fig. 1.3.4), and the foot of Mt. Hermon; those of Jordan are north of Amman (Figs. 1.3.5, 1.3.6). Forests or maquis dominated by the sclerophyllous evergreen [Quercus calliprinos] and the deciduous [Pistacia palaestina] on hard limestone with terra rossa soil are still common in the Upper Galilee and Mt. Carmel, and the Jebel Ajlun area in Jordan (the mesic aspect) and in the Judean Mountains (the xeric aspect). The companions of [“Quercus calliprinos” Q. calliprinos] vary according to edaphic and climatic conditions. In the Upper Galilee, where the climate is the moistest in Israel, the mesophytic companions comprise: [Rhamnus alaternus], [“Rhamnus punctata” R. punctata], [Eriolobus trilobatus], [Acer obtusifolium], [Crataegus azarolus], [“Crataegus monogyna” C. monogyna], [Arbutus andrachne], [Laurus nobilis], the vines [Clematis flammula] and [Hedera helix], and many geophytes and herbaceous species. Mesophytic components rarely occur in the maquis of the Judean hills. In the driest maquis stands, [Rhamnus lycioides] subsp. graecus (Fig. 1.3.7) is the only arboreal companion of [“Quercus calliprinos” Q. calliprinos]. Typical vines in these maquis are [Rubia tenuifolia], [Lonicera etrusca], [Asparagus aphyllus], and [Ephedra foeminea]. 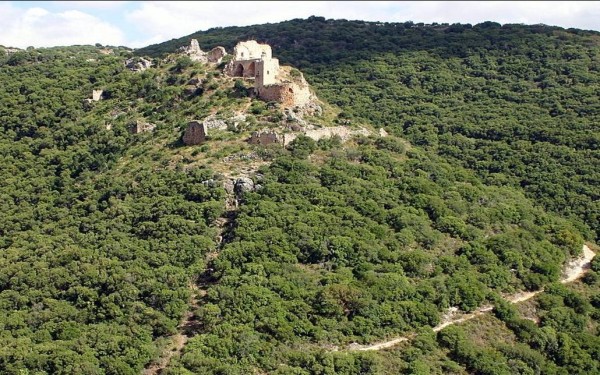 Fig. 1.3.4: A dense maquis dominated by Quercus calliprinos in the Upper Galilee, viewing the north-facing slopes at the vicinity of the Montfort. 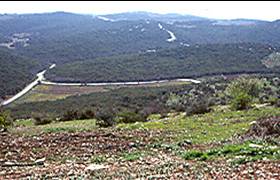 Fig. 1.3.5: Maquis prevailed by Quercus calliprinos near Zubia, Jordan. A landscape similar to that of the Upper Galilee. In terraces exposed of tree vegetation Terra Rossa is seen. Agricultures raise deciduous fruit trees, wheat and lentils. 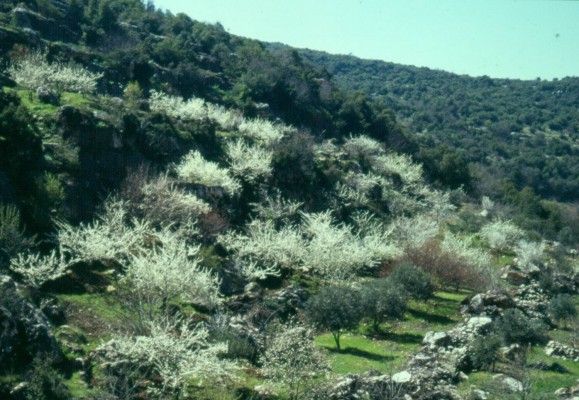 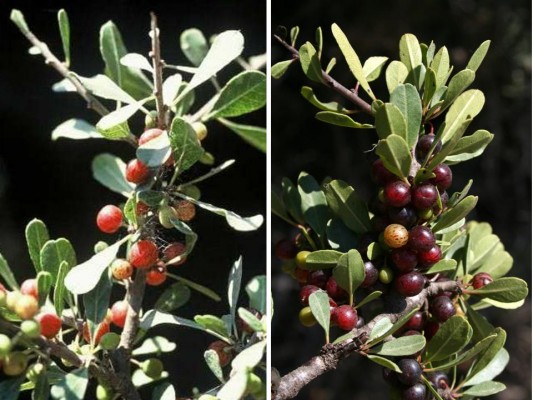 Fig. 1.3.7: Rhamnus lycioides is one of the most drought resistant shrubs of the Mediterranean maquis. Its juicy fruits are eaten by small song-birds. It is excreted in places where birds tend to stand and watch their vicinity. The seeds are not harmed when passing the bird’s intestine and germinate in the new place.

There is a unique maquis of [“Quercus calliprinos” Q. calliprinos] in Edom, where no arboreal companions occur. This is in fact a steppe-forest which developed on hard, fissured limestone. The common dwarf shrub companions are [Artemisia sieberi], [Noaea mucronata], [Astragalus bethlehemiticus], and [Argyrolobium crotalarioides]. It covers a large area of the mountaintops of Jebel Umm Suwana at an elevation of 1500-1600 m., 10 km. south of Shoubak (Fig. 1.3.8). 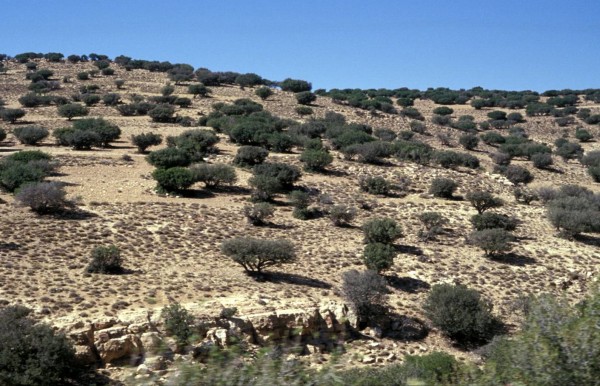 Fig. 1.3.8: Steppe-forest of Quercus calliprinos without tree companions. The most common companions are steppe shrubs: e.g. Noaea mucronata, Artemisia sieberi, Argyrolobium crotalarioides and many others. The high altitude of 1500 m a.s.l. influence much of the precipitation to arrive as snow.

Marly-chalk is a common rock type, with high moisture retention; it is covered with Light Rendzina soil. The aeration of the rhizosphere of trees and shrubs, whose roots penetrate into the soft rock, is poor; thus only specially adapted plants developed in these conditions. Much of the nitrogen in this soil consists of ammonium ions, whereas in Terra Rossa it is in the nitrate state. The vegetal cover of the Light Rendzinas on marly-chalk is poor in comparison to Terra Rossa’s. On this substratum, only a few annual companions are found in the batha or maquis stands. In sites characterized by rock with high clay content and low aeration, the tree [Arbutus andrachne] dominates (Fig. 1.3.9). Symbiosis between the tree’s roots and fungi (mycorrhiza) seems to be key to the tree’s success. The only arboreal companion here of [“Arbutus andrachne” A. andrachne] is [Pinus halepensis]; its mycorrhizal fungus (Suillus granulatus) is the most common edible winter mushroom species in Israel. On sites with low clay content, [“Pinus halepensis” P. halepensis] grows on marly-chalk without [“Arbutus andrachne” A. andrachne] (Fig. 1.3.10). Similar spontaneous pine stands cover the mountaintops in southern parts of Ajlun and southeast of the town. Near Bait Jan, in the Upper Galilee, is the only known marly-chalk slope (in Israel) where [Juniperus oxycedrus] accompanies [“Pinus halepensis” P. halepensis] and [“Arbutus andrachne” A. andrachne]. At another site in the area of Mt. Meron, this maquis is accompanied by [Paeonia mascula] (Fig. 1.3.11). 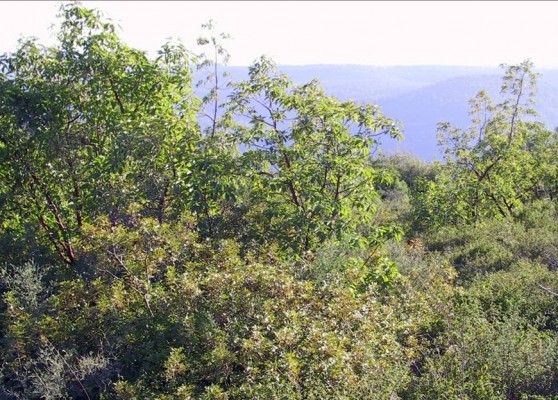 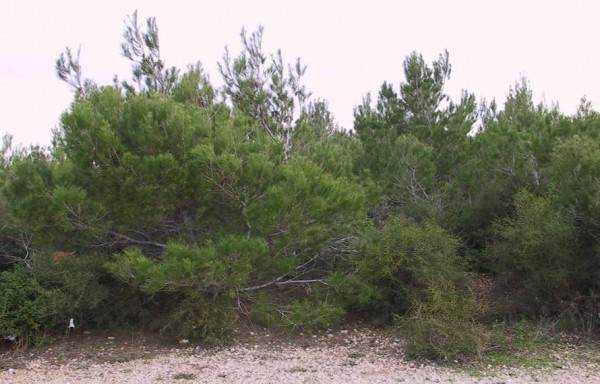 Fig. 1.3.10: A young woodland of Pinus halepensis which germinated on marly-chalk of the “wood of forty”, Mt. Carmel. Plenty of seedlings developed following a wild fire which killed the adult trees. In time self thinning of the wood takes place and the surviving trees gain a substantial crown. 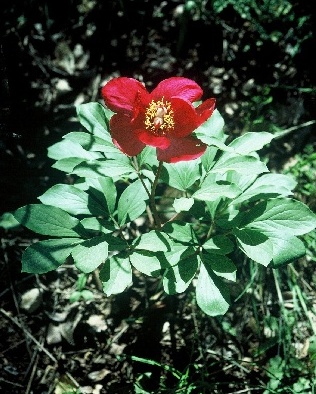 Fig. 1.3.11: Paeonia mascula developing at the partial shade of maquis on marly-chalk at area of Mt. Meiron, Upper Galilee.

Cultivated plants have replaced the spontaneous trees in most of this area. A few thousand years ago, people in the eastern Mediterranean countries started clearing natural vegetation in order to create agricultural land. Trees such as olives ([Olea europaea]) and almonds ([Amygdalus communis]) were domesticated from the spontaneous flora of the area. The timber taken from the forests and maquis was used for the construction of houses, for agricultural tools, and for fire fuel. During the past few millennia, shepherds burned large woodland areas to open paths for domestic animals, and the pasture quality was improved as trees and shrubs were replaced by more palatable herbaceous plants (Fig. 1.3.12). 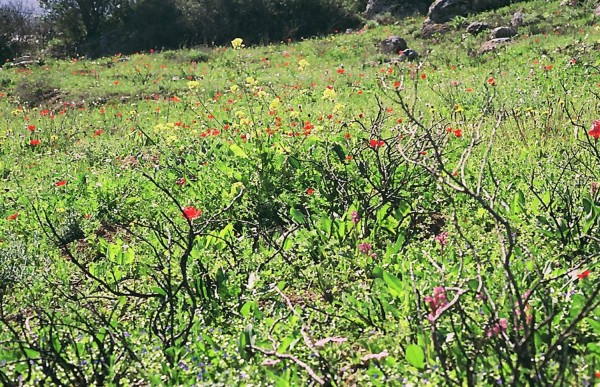 After cultivated soil is abandoned, it becomes populated for dozens of years by colorful herbaceous plants and later by low lignified plants. This vegetation formation of Mediterranean semi-shrubs has been known locally since Biblical times as “batha” (= phrygana). At present, after thousands of years of deforestation and agricultural and urban development, large parts of these areas resemble mosaics of seral communities. They feature semi-shrub communities dominated by [Sarcopoterium spinosum], [Coridothymus capitatus], and [Cistus] species (Fig. 1.3.13). Formations of taller shrubs (garigue) such as [Calicotome villosa] (Fig. 1.3.14) and [Salvia fruticosa] replaced the Sarcopoterium-dominated bathas. 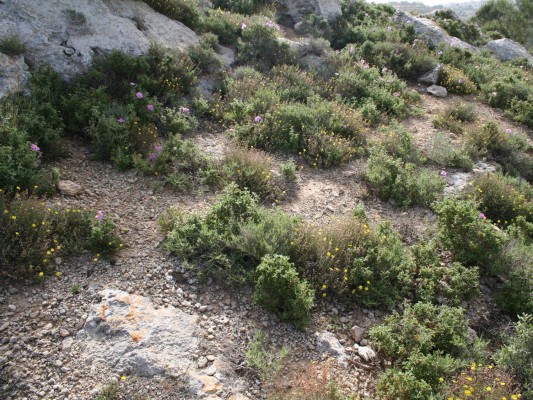 Fig. 1.3.13: Batha of Sarcopoterium spinosum, Cistus creticus, and Fumana thymifolia developed in place of trees and shrubs covering the area. 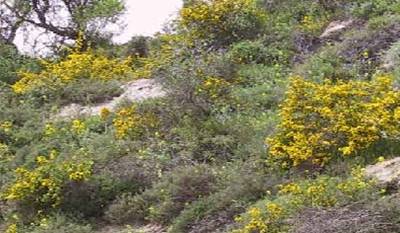 History, Satellite Imagery and the Flora of Israel (Phytogeography)