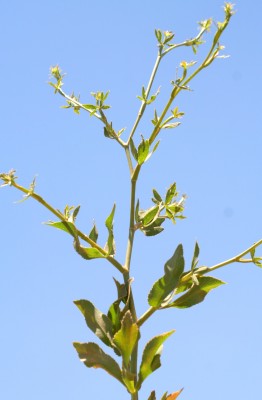 Thorns of Ziziphus, Parkinsonia and Juncus

The Ziziphus species in Israel also have a pair of thorns at the base of the leaf and they are regarded as stipular thorns ([usefulplantsp1 Fig. 16.1.5]). In most cases one of these thorns is straight and the other hooked. There are rare cases where pairs of hooked thorns occur on the Ziziphus stems. When the thorn’s bark is removed, the lignified part is exposed, having the same color along its whole length. Such thorns occur also in the rare tree of northern Israel, [Paliurus spina-christi].

[Parkinsonia aculeata], which is used to make “modern” crowns of thorns, has three thorns in each node (Fig. 16.1.29). The central one is straight and the lateral ones are hooked (Fig. 16.1.30). At the base of the straight thorn are 2-3 pairs of leaf branches carrying minute leaflets. The pair of hooked thorns is situated below the leaflet-carrying leaf branches. It is possible to look upon the straight thorn as the tip of the hard central leaf axis, as seen in many Astragalus species. The pair of hooked thorns seems to be stipular thorns. 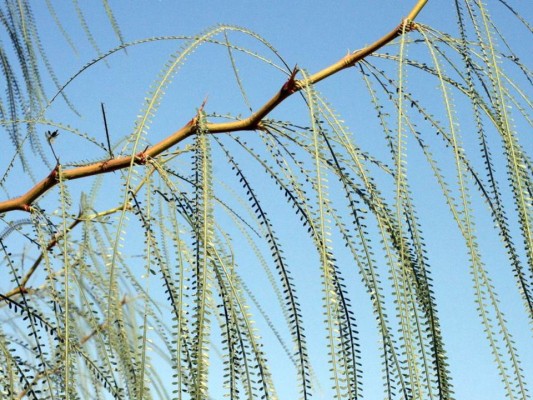 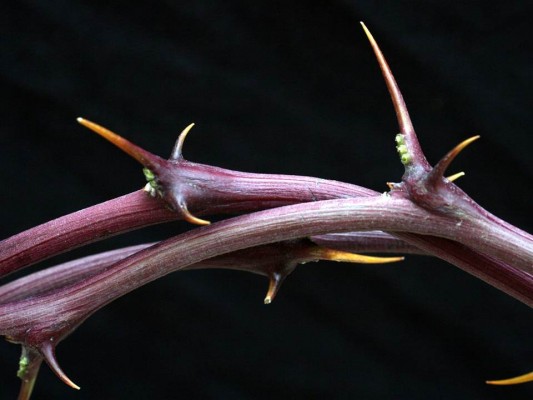 Fig.16.1.30: In each node of the Parkinsonia stem there are three thorns; at the base of the straight central one are three branches that were cut and below them is a pair of hooked thorns

Three Juncus species in Israel have long cylindrical leaves and inflorescences terminating in a pointed tip. According to the findings of Fleury (1870), the thorny leaves of Juncus (“jonc” in French, “rush” in English) make up the whole body of the “Crown of Thorns” displayed in the Notre Dame Cathedral in Paris. No thorny tip of the Juncus leaves or stems is seen in the illustrations presented in Fleury’s book. A close up of the plant material, from which the Crown of Thorns in Paris (Fig. 16.1.31) is constructed, closely resemble stems or leaves of Juncus. On the left side of the circle we have copied a close-up drawing from Fleury’s book showing the artist’s high level of accuracy. Juncus acutus plants growing on the Sea of Galilee beach are displayed in Fig. 16.1.33. A green section of a leaf of living [Juncus acutus] is placed near a close up of two stems or leaves from the Paris Crown of Thorns (Fig. 16.1.34). The longitudinal lines in the plant parts are the parallel veins. Direct study of the plant components of the Paris Crown of Thorn is necessary for a definite determination.

My personal history in relation to the relic in Notre Dame is associated with the determination of material held in custody by Alan Whanger, in Durham, North Carolina. He has material sampled by Dr. Max Frie by means of his sticky tape method. At the tip of a leaf or a stem that I checked in 1997 or 1998, I saw two projections that reminded me of projections typical of the barley leaf. Since then I have not seen any component of the Notre Dame “crown” and throughout subsequent years I thought that the crown of Paris components were straw of barley, wheat or oat. In accordance with this assumption, I instructed Michal Raz, who made models of the Helmet of Thorns (Fig. 16.1.35) for exhibitions in Jerusalem, Rome, and Sacramento. Until proved otherwise, the Crown of Thorns in Notre Dame in Paris should be regarded as made from Juncus leaves or stems as studied and concluded by Fleury (1870). 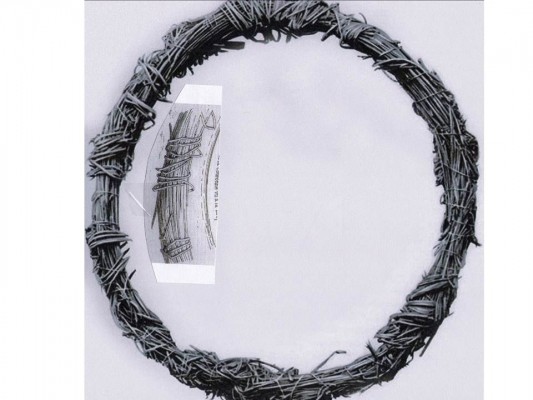 Fig.16.1.31: A photograph of a circle made from stem and/or leaves of Juncus. This circle is placed in a decorated glass reliquary in the Notre Dame Cathedral in Paris. On the left a drawing of a section of the same section to demonstrate the high accuracy of Fleury’s book 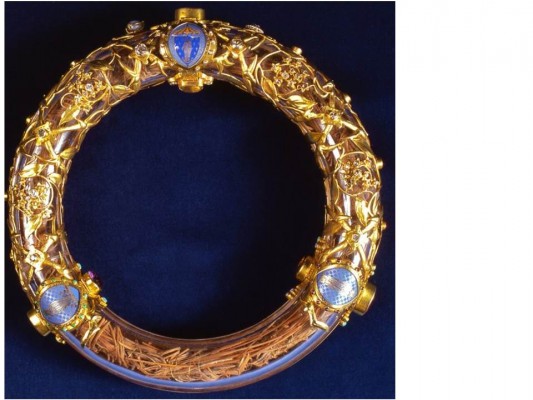 Fig.16.1.32: The reliquary in the Notre Dame Cathedral in Paris, known as “the Crown of Thorns” 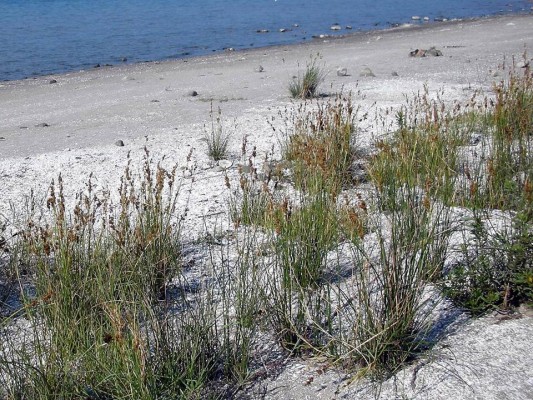 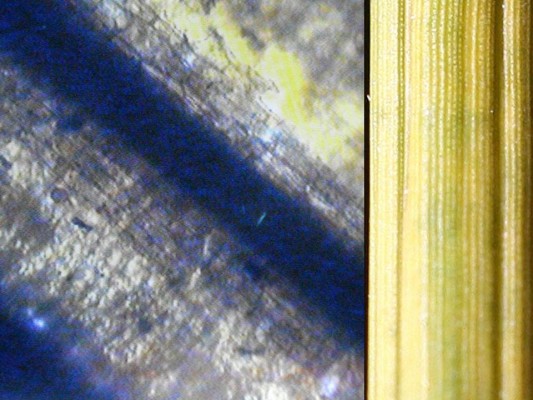 Fig.16.1.34: Two magnified stems or leaves of Juncus from the Crown of Thorn of Notre Dame Cathedral in Paris. On the right a section of a stem of Juncus acutus plants from the Sea of Galilee beach. Parallel veins look similar in all three 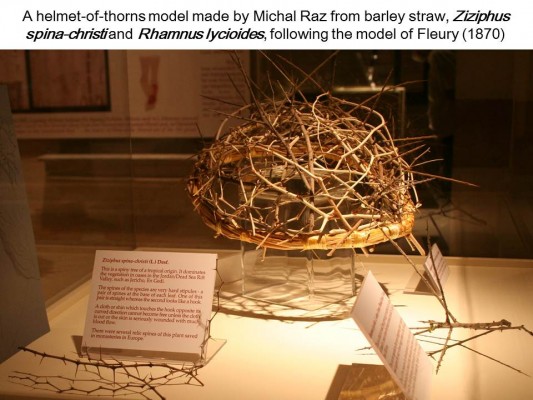 The Crown of Thorns as sold to tourists in Jerusalem

I do not know what was sold to tourists in the old city of Jerusalem during the period preceding the importation of [Parkinsonia aculeata]. This tree flourishes in Central America as a savannah tree and was introduced to Israel as an ornamental tree some 100 years ago. In many places it escaped cultivation and established itself at roadsides. In souvenir shops in the area near the Holy Sepulchre, one can buy crowns of thorns constructed from Parkinsonia aculeata stems made into a circle. They have a paper with a title “Certificate of Origin” (Fig. 16.1.36) and a stamp mentioning the Superior of the basilica of the Holy Sepulchre.
Some ten years ago crown of thorns (as in Fig. 16.1.37) without a certificate were sold there. The tree is displayed in Fig. 16.1.38.

On my last visit to the Old City, I asked a shop owner to show me the Crown of Thorns he sells. Looking at the first sample he gave me I was surprised to see that it is a circle of Lycium stems (Fig. 16.1.39). Among my photographs I found an appropriate one of [Lycium schweinfurthii] worthy of demonstration (Fig. 16.1.40). There is no proof of any connection between Lycium and the crown of thorns. When asking the shop owner if he had something else, he showed me the “certified” circle of Parkinsonia aculeata (Fig. 16.1.36) and emphasized its certification. 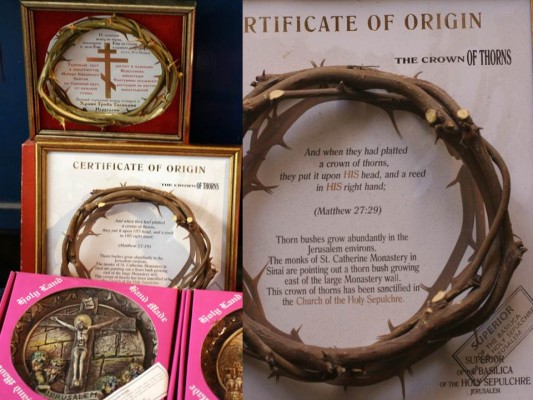 Fig.16.1.36: “Crowns of thorns” made from Parkinsonia aculeata and sold in Jerusalem’s Old City with a certificate of origin signed by the Superior of the Basilica of the Holy Sepulchre 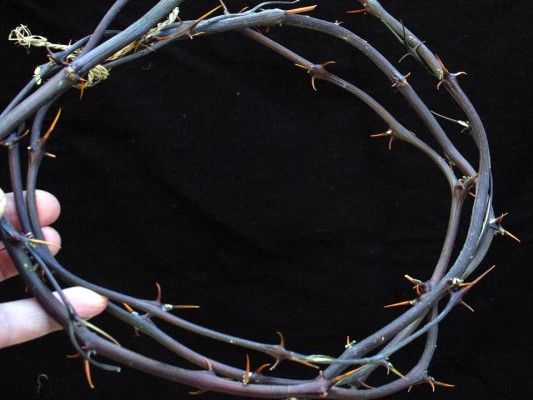 Fig.16.1.37: A circle made from Parkinsonia aculeata branches. This was the shape of the Crown of Thorns sold in the Old City some 10-20 years ago 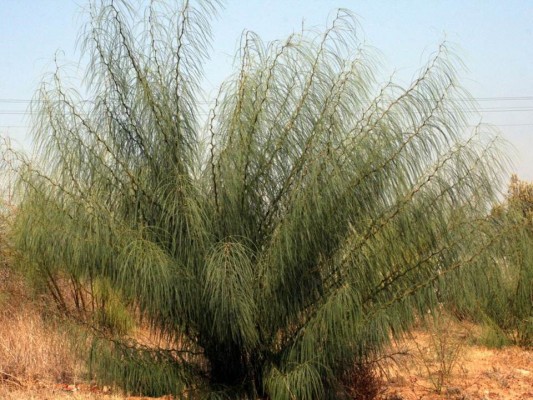 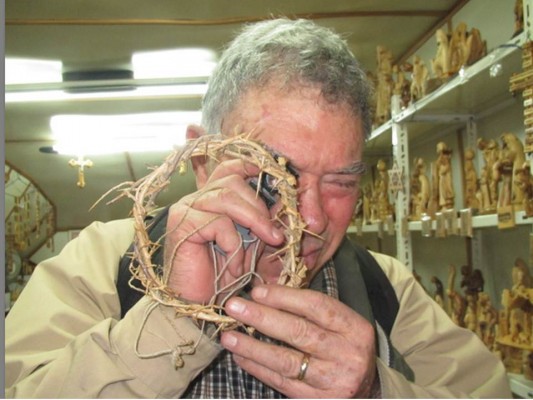 Fig.16.1.39: Check up of a circle sold as a crown of thorns in Old Jerusalem and made from Lycium 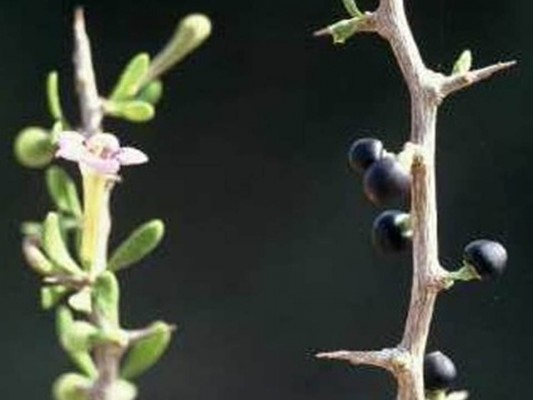 I made preparations for a new and extended study of thorns regarded as “Holy” and preserved in many churches in Europe. I summed up what I had studied and compared it with the information provided by Fleury (1870). After identifying images of nine thorns resembling [Rhamnus lycioides] I started to investigate relict thorns determined as Rhamnus by Fleury (1870). In my studies in 1997-8 and 2006 I searched for morphological similarity between six holy thorns in Italy and living thorns of Rhamnus lycioides. When preparing for a televised interview in the summer of 2011, I investigated a holy thorn photographed earlier in Andria, Italy. The most important diagnostic character is the red-brown translucent tip of the thorn. Part of reason for their being sanctified may be related to the color, which reminds believers of blood. Most of the length of the thorn is white and opaque. Microscopic cross sections of the two parts of the thorn enable better understanding of their nature.
The Crown of Thorns in Notre Dame in Paris is made up of leaves and/or stems of Juncus. The plant material was determined by Fleury (1870).
Parts of inflorescence of Juncus may be seen in the photograph of the relict.