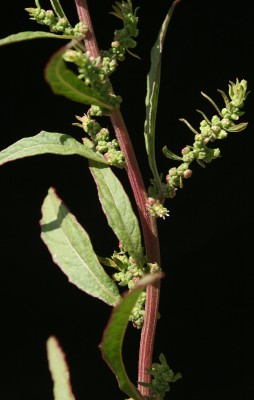 What this Bitter Herb: Cichorium, Eryngium and Scorzonera

[Cichorium endivia] has a similar life cycle (Figs. 13.2.1-13.2.4). Its Mishnaic name (olesh, olashin) was revived by the Hebrew Language Committee (1929) and there is a high probability that the echo of the Mishnaic name is found in the Arabic name of the plant (‘ilt). Many dishes of “‘ilt’ are served in winter in the restaurants of Umm Al Fahm. Such dishes are evidently served in other restaurants as well, but I had mine near Umm Al Fahm. The soft-leaved [Cichorium] differs considerably from the blooming plant. I had to work hard to convince my students that the two plants belong to the same species. An additional didactic comment: the one who wants to obtain photographs showing deep blue color as in Fig. 13.2.4 and not light blue as in Fig. 13.2.3 should take the photograph as close to sunrise as possible; once sun rays touch the [Cichorium] flowers the blue fades away. 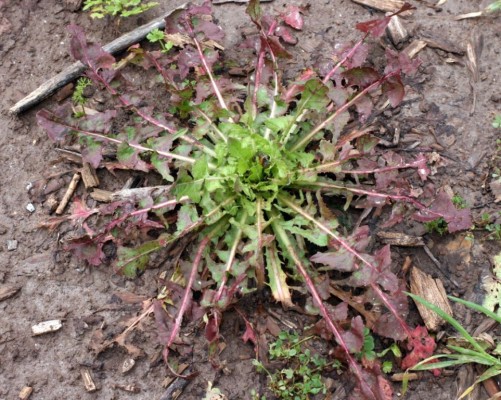 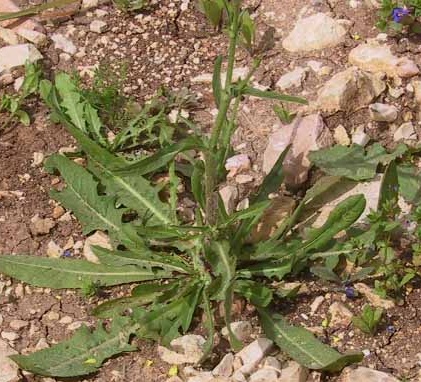 Fig. 13.2.2: Cichorium endivia, a leaf rosette and beginning of development of flowering stems. 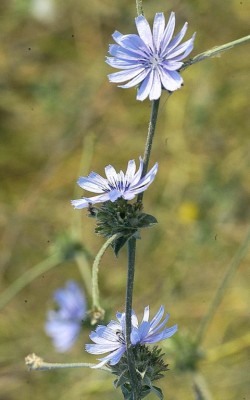 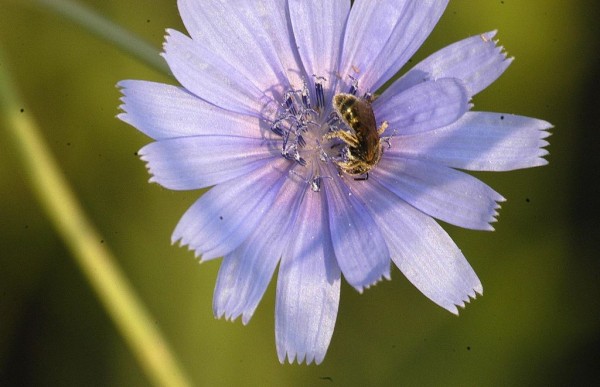 The life cycle of [Eryngium creticum] is well expressed in the Hebrew name of the plant which is derived from the root “dry”. The name follows the life cycle of “beginning soft” (Fig. 13.2.5) in the rainy season and “terminating stiff” (Figs. 13.2.6, 13.2.7) towards the summer. The plant’s beauty is revealed to anybody who takes a close-up view. The blue-white combination is rare in our natural vegetation (Fig. 13.2.8). It provides a diverse collection of tastes. The young leaves have rather juicy petioles which taste like celery or parsley only without the bitterness. The roots may be consumed raw throughout the year. The lamina of the young leaf is bitter and should be cooked as described in the discussion regarding [Centaurea]. 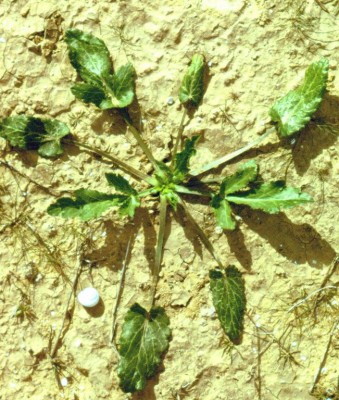 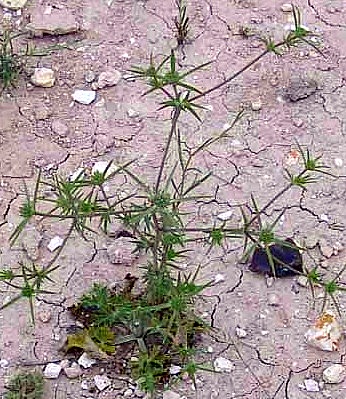 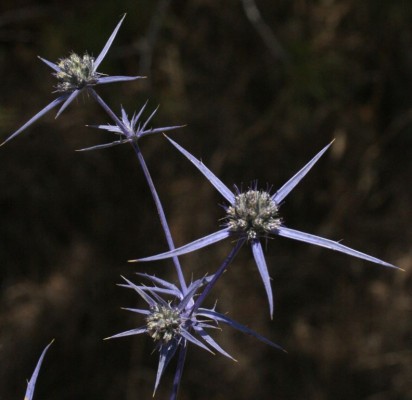 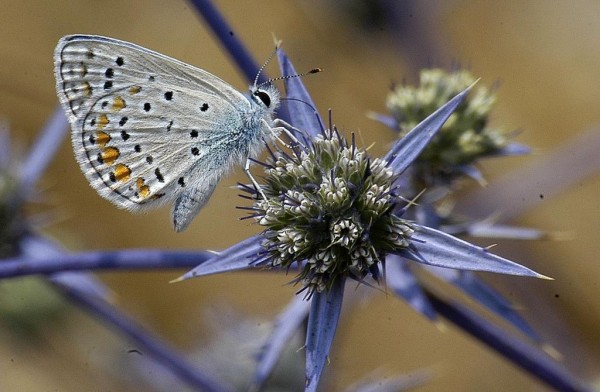 Fig. 13.2.8: A butterfly on a ripe inflorescence of Eryngium creticum (photographed by Ilan Zaharoni).

Of all the plants mentioned in relation to the bitter herbs, my favorite is [Scorzonera papposa]. During a field trip in the Negev desert in the 1950s as part of the investigations of the unit for escape and survival in the Israeli Air Force, we met a Bedouin some 7 km north of Mizpe Ramon. The latter taught us how to eat leaves and roots of [Scorzonera papposa] and to toast root tubers of [Scorzonera judaica] in burning charcoal. Years later I went for a research mapping excursion in the Negev Highlands. I did not take sandwiches that day and ate only leaves, young inflorescences (Figs. 13.2.9, 13.2.10) and toasted roots of [Scorzonera papposa]. Since then, for reasons of personal nostalgia, I eat at least one young inflorescence when passing near a young plant (Fig. 13.2.11) and enjoy its sweetness. When we returned again to the area where the Bedouin had taught us, the [Scorzonera] plants were already dry. We asked our teacher how to find the dry plants in order to dig for their roots. He showed us the achenes equipped with hairy pappus on shrubs near the mother plant (Figs. 13.2.13-13.2.16). We used these indicators to find roots which may serve as a good source of food for the wanderer in the desert. The Arabic name of [Scorzonera papposa] in the Negev is “bsha” whereas Bedouin of the northern part of the country call it “zubaiekh”. When I met several Bedouin east of Netanya, I asked them for the [Scorzonera papposa] name. I instantly discovered that one of the groups came from the Negev. 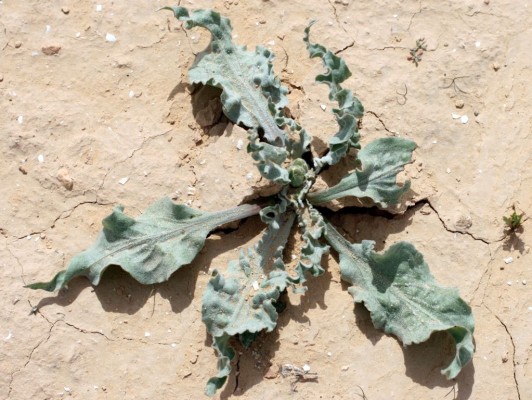 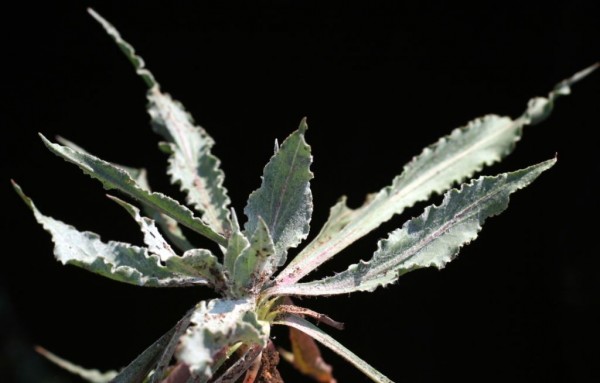 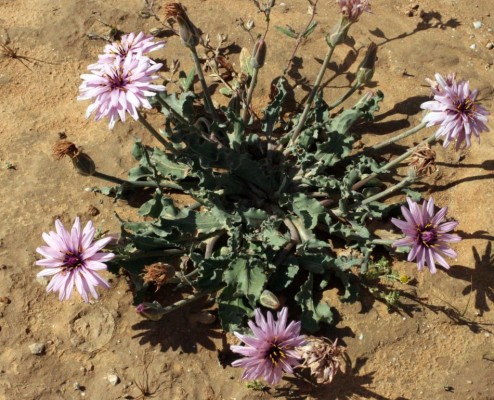 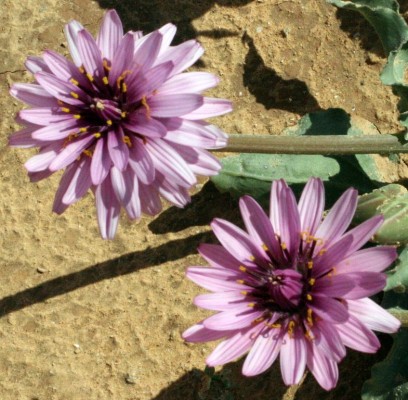 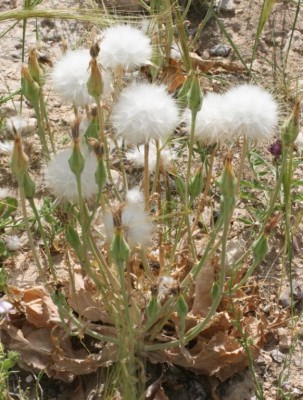 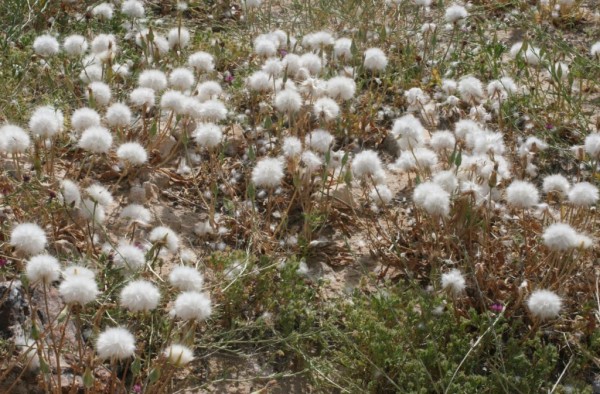 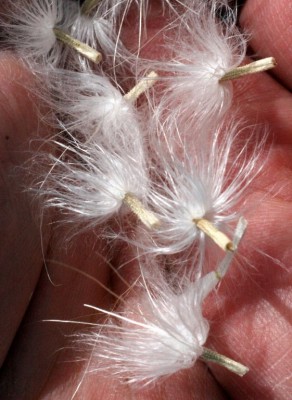 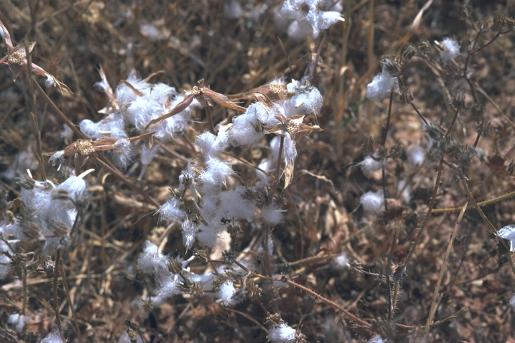 Fig. 13.2.16: Dispersal units become attached to neighboring plants and assist the finding of the plant root in summer.

And in my home?

I used to bring samples of the bitter herbs mentioned above to our Passover Seder. I heard a “rumor” that the Samarians use [Lactuca serriola] as bitter herbs in their Passover celebration as mentioned [usefulplantsm1 at the beginning of the present chapter]. I remembered a scientific paper I had read once dealing with domestication by the Romans of the cultivated lettuce from the wild progenitor [Lactuca serriola]. I therefore use lettuce as “bitter herb” for the Passover Seder.

What this Bitter Herb: Sonchus, Lactuca and Centaurea