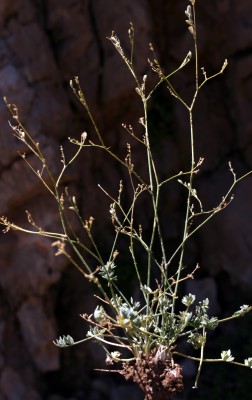 At the end of 2010, volume 20 of “Flora Mediterranea” was published in Palermo, Italy, and it included my article “Capparis in the East Mediterranean countries.” The caper species, common in the rainy part of Israel, is described there as the independent species Capparis hierosolymitana Danin. Additional changes in the name took place a short while later.
The common caper – Capparis spinosa L. (Figs. 15.1.1, 15.1.2) was first described by Carolus Linnaeus in 1753, in his book “Species Plantarum.” This book is the basis for the modern nomenclature. Researchers who followed him built up a system of laws or recommendations concerning the handling of names provided by Linnaeus.

Discovering the plant that Linnaeus used for describing the plant is known as “typification.” Burtt and Lewis (1950) typified Capparis spinosa, and concluded that Linnaeus had used the dried plant kept in the work “Hortus Cliffortianus” at the British Museum in London. The origin of that specimen was in the walls of old aqueducts in Rome and may be recognized by the ripe, red fruits with internal white walls (Figs. 15.1.1, 15.1.2). 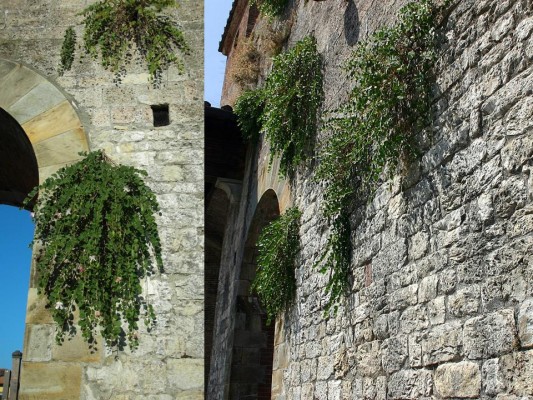 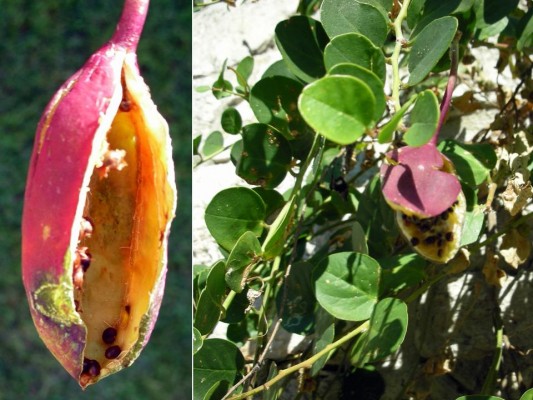 Fig. 15.1.2: A ripe fruit of Capparis spinosa in Pisa, red outside and white inside.

Our perception of the genus Capparis in Israel is based, in the first place, on the scientific literature preceding “Flora Palaestina.” In the first Analytical Flora of Eretz Israel (Eig, Zohary & Fenbrun 1931) there are three species: Capparis decidua, C. galeata (today’s correct name is C. cartilaginea) and C. spinosa for the species common throughout the country. In the second edition (printed in 1948) there are five species: [“Capparis decidua” C. decidua], [“Capparis cartilaginea” C. cartilaginea], [“Capparis aegyptia” C. aegyptia], C. spinosa and [“Capparis sicula” C. sicula]. M. Zohary, when compiling the book “Flora Palaestina I,” prepared a revision of the genus (published 1960). He based his view on the account of E. Boissier in his monumental work “Flora Orientalis.” The latter regarded the two caper species C. aegyptia (which grows in the desert areas of the east Mediterranean countries) and the caper of the Mediterranean territories, as one entity, and named it Capparis spinosa L. var. aegyptia (Lam.) Boiss.

In my opinion and that of other researchers, Capparis aegyptia deserves to be recognized at the species level, as the other taxon. La-Marck (1785), who described the latter, used plants from Egypt. He mentions an observation of Lippi, that this species has bluish leaves. This property fits well the caper of the desert areas of Israel and its neighboring countries. I saw it growing in the Dead Sea Valley, Negev Highlands, southern Negev, Sinai, Egypt (near Suez) and in the cliffs of Petra and its environs (Figs. 15.1.3-15.1.6). C. aegyptia is an evergreen. It sprouts in the Dead Sea Valley in February, develops green stems and thin green leaves and carries flowers. When the fruits are almost ripe, the leaves become succulent, 2-3 times thicker than their winter size, and become covered with a thin layer of white wax which makes them look blue. The light color considerably decreases the amount of solar radiation absorbed by the plant. This property has been found to be an adaptation of the plant to desert environments. When one “wipes off” or “removes” the wax, the leaf appears clear green (Fig. 15.1.4). The leaves remain on the shrubs throughout the year and in February green branches sprout, with thin green leaves (Fig. 15.1.3, right). 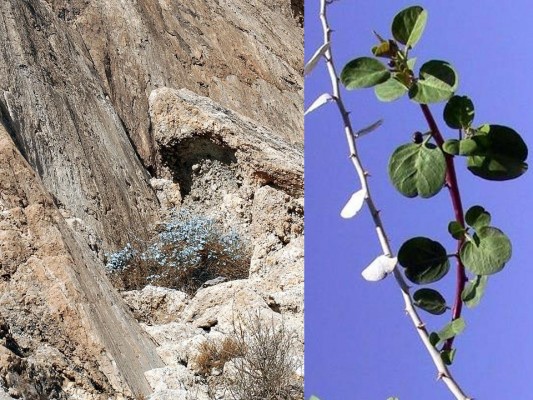 Fig. 15.1.3: Capparis aegyptia Lam. at the coastal area of the Dead Sea, near ‘Enot Zukim – at the foot of the sliding cliff which is part of the “Afro-Syrian Fault”. The leaves become bluish in summer. On the right sprouting of a new green branch from the axile of a one-year-old bluish-white leaf covered with wax. 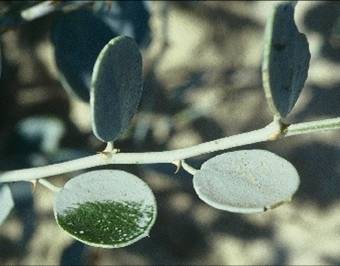 Fig. 15.1.4: Capparis aegyptiawith leaves and stems covered with wax; half of the left leaf is wiped off its wax exposing the green color of the leaf. 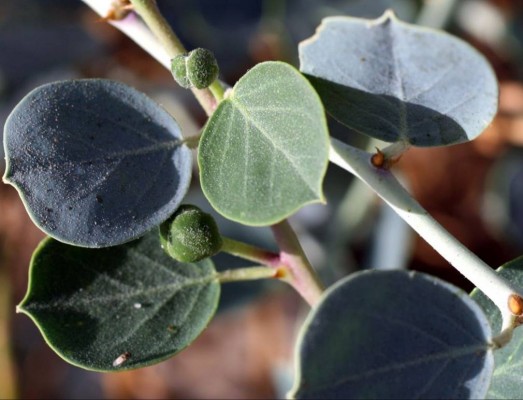 Fig. 15.1.5: Capparis aegyptia – the left branch green and carry flowering buds, the right branch and its leaves covered with wax. 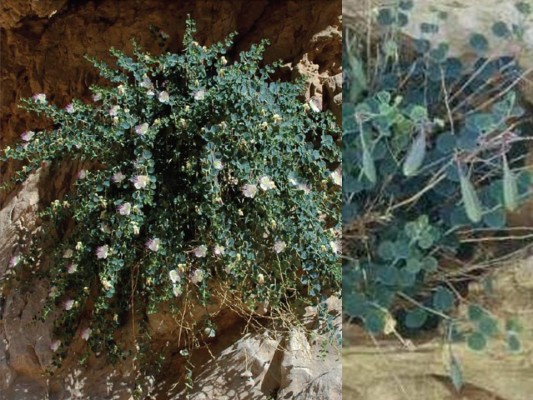 Upon entering academic life I brought with me personal observations that included the hobby of pickling caper buds and young fruits. One of the properties I sensed was the much sharper taste of C. aegyptia buds compared to that of the “Mediterranean caper” and C. sicula. The last “straw that broke the camel’s back” in differentiating the two species, took place in Edom, SW Jordan, in June 1997. During the same week C. aegyptia was blooming in the Petra area, while the “Mediterranean caper” was blooming in Dana Nature Reserve. So what is the proper name for the Mediterranean caper?! Upon comparing our species with C. spinosa (from Rome), the Israeli one has a pair of hooked thorns at the base of each leaf and its ripe fruit is green outside and white inside (Fig. 15.1.8). On the other hand, the one from Rome has red fruits that are white inside (Fig. 15.1.2); most stems do not carry thorns. The above-ground parts of the Israeli caper dry up in winter and totally new branches sprout from the plant base.
Temporary conclusions are that in this group we are dealing with three species: 1. C. spinosa, which has red fruits and grows in Rome, 2. The Mediterranean caper of Israel, Jordan, Lebanon, Cyprus and Eastern Crete, and 3. C. aegyptia – the desert species which has a green crown that becomes blue in summer. Since Boissier did not observe the whole growth cycle of the capers in the area, he combined the second and third entities into one variety of the first.
Over the years, as a plant taxonomist, I felt uncomfortable criticizing the review of my late teacher Prof. M. Zohary (1960). A few years after his death, I compiled a manuscript which has remained on my computer’s hard disk since 1999. I then collected a typical plant which I decided to make into a holotype, but I did not dare to publish it. In July-August 2010 I corresponded with Prof. Sandro Pignatti, the author of Flora D’Italia. He is preparing the second edition of his Flora and asked me about my perception of the genera Portulaca and Capparis. In order to answer the Capparis question I sent him my manuscript. His reaction was that the article is interesting and worth publication. It revived my old desire to publish it because he is one of the top taxonomists of the Mediterranean flora. In a summer course at the University of Palermo he also recommended to our students to refer to the caper chapter in my website, [usefulplantse1 Plant Stories-Chapter 5].

The manuscript was sent to the journal Flora Mediterranea, accepted, and printed there before the end of 2010. In that article the “Mediterranean caper” (Fig. 15.1.7) was named Capparis hierosolymitana Danin. It could commonly be called “the Jerusalem caper.” In the scientific article, my justification for the name was that the plant abounds on old walls in Jerusalem (including our most sacred, the “Western Wall”). It also commemorates Hanoun Ben (son of) Tzalaf (caper in Hebrew), who was one of the builders of old Jerusalem in the days of Ezra and Nehemiah (some 2400 years ago). In that article, I included a [“Capparis zoharyi” photograph of a huge Jerusalem caper] hanging from the Western Wall . 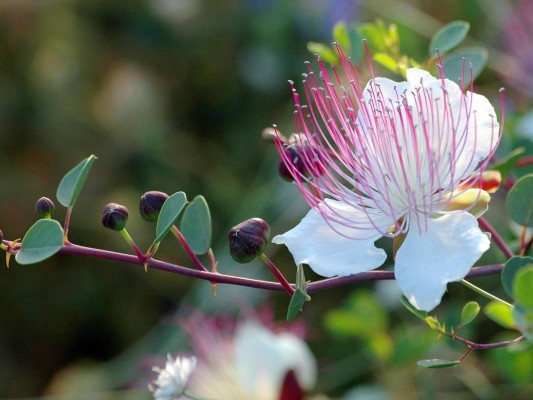 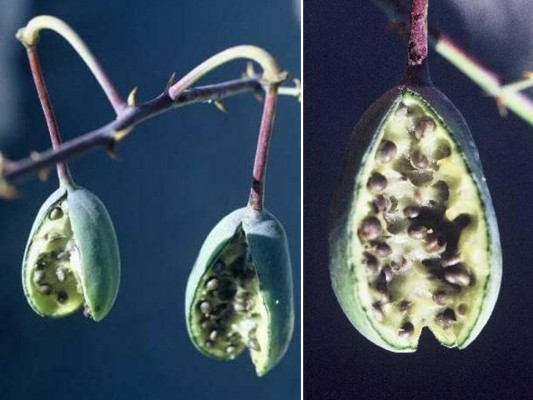 Fig. 15.1.8: Fruits of Capparis zoharyi green outside and white inside.

This might be the place to relate a small personal incident concerning Prof. M. Zohary and capers. It was in 1964 or 1965 during an excursion conducted by Prof. Zohary with his students from Jerusalem. I was then a Ph.D. student working in Beer Sheva, mapping the vegetation of the Negev. I accompanied them and when we reached the Meishar plain, we stopped to see the vegetation in a richly flowering wadi. Seeing several Egyptian capers in full bloom, I left the group with their professor and went to collect buds for pickling. Upon returning to the bus Zohary looked into my plastic bag hoping to see a rich sampling of the wadi’s flora. He was disappointed and said that I was “taking care of this world” (by preparing food) and not “for future generations” (by collecting herbarium specimens). I did not answer him but his comment remained in my memory all these years. Now I used the hot taste of the pickled buds of C. aegyptia to compare it to that of the Jerusalem caper, as a kind of preliminary chemical test.

[Capparis sicula] (and not C. ovata) 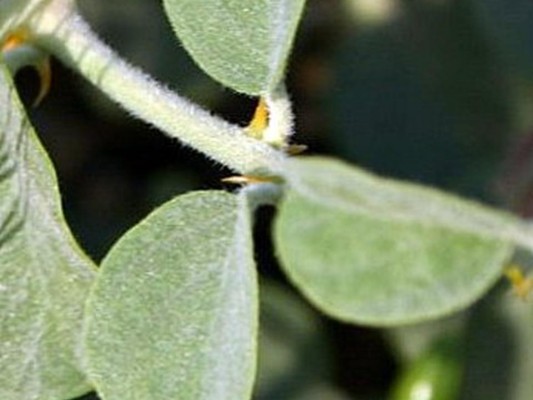 Fig. 15.1.9: Capparis sicula, a close-up of a branch and leaves densely covered by white hairs.

In Flora Palaestina and in his Analytical Flora, M. Zohary named the hairy caper, densely covered throughout with white hairs (Fig. 15.1.9) Capparis ovata. In publications of OPTIMA and in the review article of Inocencio et al., (2006) it became clear that C. ovata is a west Mediterranean species growing mainly on the North African side of the sea. The hairy species that was named Capparis sicula in the Analytical Flora (Eig et al., 1948) is indeed C. sicula. 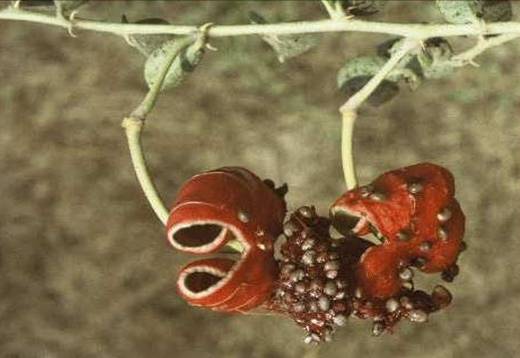 Fig. 15.1.10: Opened fruits of Capparis sicula where dark seeds are seen on the red background of the inner part of the fruit. 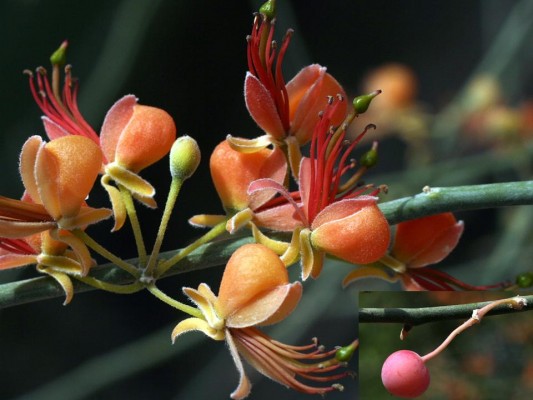 Fig. 15.1.11: A blooming branch of Capparis decidua and at the bottom right – a ripe globular red fruit.

Changes in nomenclature following a Ph.D. thesis in Spain

One week after the publication including C. hierosolymitana I received a letter from a colleague in Reading, England. He called my attention to the article of Inocencio et al., (2006). These authors named the Jerusalem caper Capparis zoharyi in honor of the study he carried out in 1960. I can hardly believe that C. zohary grows in the entire range given by its authors; however, I am covering but a minute part of the area included in their study. I was not aware of the intensive studies of this research group and had I known, I would not have published my article in 2010. We learn new things every day. Colleagues dealing full time in plant taxonomy have told me that such things happen to the best of us.
Dr. Diego Rivera, the instructor of Dr. Cristina Inocencio, has assisted me, through correspondence, with additional information concerning our capers. The name of the evergreen and lignified shrub of the southern Negev in the Analytical Flora (1948) was C. cartilaginea Decne. Our colleagues in Europe changed the name to C. sinaica Veillard and I followed them in our Analytical Flora (Feinbrun & Danin 1991) and my “Distribution Atlas” (2004). Rivera and his colleagues discovered that the holotype of C. sinaica was in fact C. aegyptia. The “green plant with red fruits” we are now discussing had two names: Capparis inermis Forssk. (which has priority) and C. cartilaginea Decne. Rivera and his colleagues submitted a request to an international committee of plant taxonomy to conserve the name in common use in many books dealing with their country’s local flora. Their request was approved (in 2003) and the plant name reverted back to C. cartilaginea Decne.

Manna From the Desert and From the BookShelf