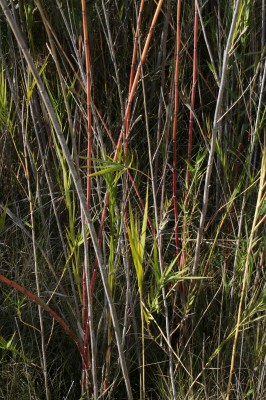 The principle of “tea”- making from plants is rather simple. Prepare a small quantity of leaves or stems in the drinking glass or mug, boil water and pour it on the dry or fresh leaves. Sweeten it if you wish, and drink. Many of the “tea plants” are known also as medicinal plants. At present, as chemical research of medicinal plants progresses, it becomes evident that many of these herbs contain high quantities of anti-oxidants that are “good for the health”. The most prominent family in the list of herbal teas is [http://flora.huji.ac.il/browse.asp?lang=en&action=browse&group=6 Labiatae (Lamiaceae)], which contains: [Micromeria fruticosa], [Salvia fruticosa], [Teucrium capitatum], [Teucrium leucocladum], [Mentha longifolia], [“Mentha pulegium” M. pulegium], [“Mentha aquatica” M. aquatica], [“Mentha suaveolens” M. suaveolens], [“Origanum dayi” Origanum dayi], [“Origanum ramonense” O. ramonense], [“Origanum petraeum” O. petraeum], [“Origanum punonense” O. punonense], [Ziziphora capitata] and [“Ziziphora clinopodioides” Z. clinopodioides]. My own daily tea is made from [“Origanum dayi” Origanum dayi]. Once or twice a year I receive dried leaves raised by my friend in his research area; in this way I use the high quantity of anti-oxidants he found in this plant. Our friendship started a few years ago when we went together on a mini-expedition to collect specimens of Origanum ramonense for his research. Whoever wants to name it differently, may put the [Origanum] species under the special title of “Friendship Initiators”…

Another plant that is rarely used for herbal tea in S. Sinai is [Ziziphora tenuior]. It has a mint-related scent. However, the mint in Sinai, [Mentha longifolia], is a perennial plant growing on spring-water, and named in Arabic “khabak”. [Ziziphora tenuior] is an annual and grows in useful quantities only in rainy years. Its Bedouin name is khabak atshan meaning “the thirsty mint” – one can enjoy it only in rainy years.

The following aromatic members of the [http://flora.huji.ac.il/browse.asp?lang=en&action=browse&group=1 Compositae (Asteraceae)] are also used for the preparation of herbal tea: [Artemisia sieberi], [Artemisia judaica], [Matricaria aurea], [Matricaria recutita], [Asteriscus graveolens] and [Pulicaria incisa]. The medicinal qualities of [Pulicaria incisa], as told by the Bedouin of S. Sinai, are for treating pains in the joints. Following climbing and descending high mountains in Sinai we tended to believe the Bedouin. The [Pulicaria] tea might have helped us, but at any rate – it was tasty. If you wish to keep the plants for a long time, cut leafy branches, dry them in a shaded place, and keep in a closed container.

I have always thought of [Deverra tortuosa] as a good substitute for soup powder. I list it here only in order to honor the Bedouin of S. Sinai who regarded the plant as a substitute for real tea. They would add sugar to the hot drink they made by pouring hot water on [Deverra tortuosa] stems. [Asphodelus ramosus] is also an exceptional source for tea, and is made from the thick roots after peeling off their bark.

Salt is the spice that I find easiest to advise on how to obtain. (NaCl). There are plants that live in salt-rich environments, absorb salts from the soil and excrete the salts on their leaf and stem surfaces. Reaumuria species grow in all the desert areas of Israel; their interesting property is having salt-excreting glands (Fig. 5.4.1 right). [http://flora.huji.ac.il/browse.asp?action=specie&specie=REAHIR&fileid=17888 Salt-rich solutions are excreted]. As the water in the fluids evaporates, white salt crystals remain on the leaf (Fig. 5.4.1 left and Fig. 5.4.2). This phenomenon takes place also in all the [Tamarix] species. Sometimes the green stems become white from extra salts (Fig. 5.4.3). The process leading to this is the same as in [Reaumuria] (Fig. 5.4.4). 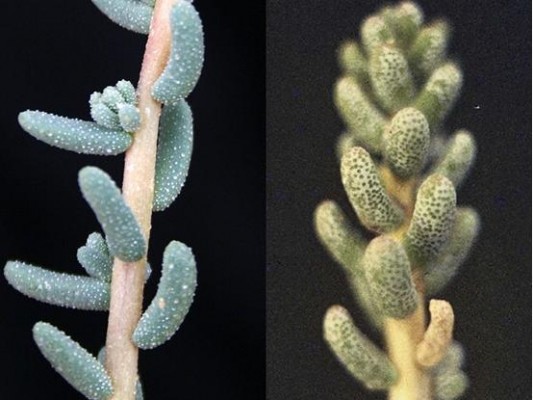 Fig. 5.4.1: Leaf-carrying stems of Reaumuria negevensis. The right stem, rinsed by rain-water, displays salt-excreting glands on the leaves; the white dots on the left leaf are salt grains crystallized from the solutions excreted by the glands. 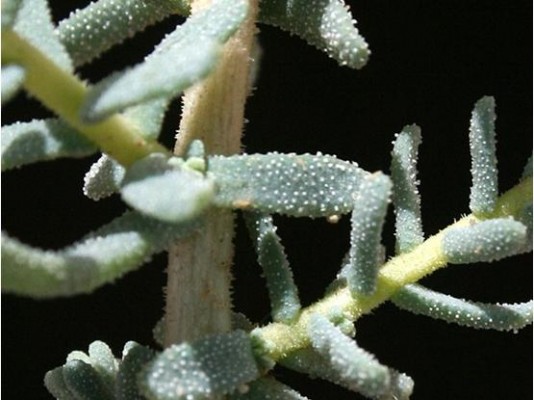 Fig. 5.4.2: Leaf-carrying stems of Reaumuria hirtella. The white dots are salt grains crystallized from the solutions excreted by the glands. 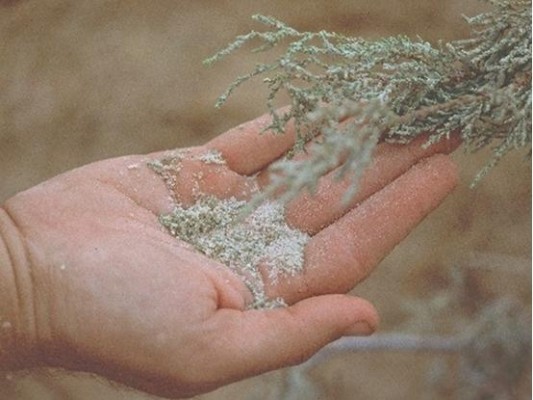 Fig. 5.4.3: Tamarix growing in a desert salt-marsh. The high quantity of salts excreted by the salt glands have covered the green stems and provide salt for use as a food spice. 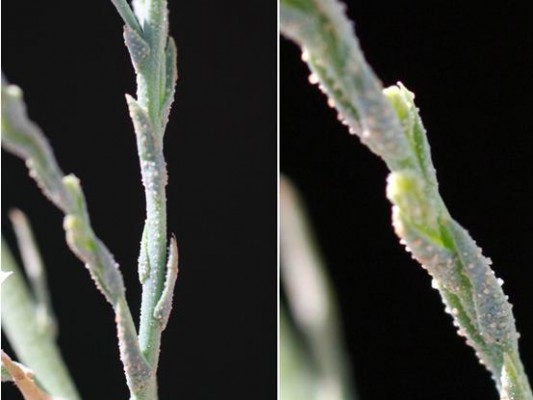 Fig. 5.4.4: Tamarix tetragyna near Yerokham. Green stems (ca. 1 mm in diameter) covered with salt, typical of most Tamaricaceae, revealed by the white crystals.

Salt excretion takes place in most [Limonium] species (Fig. 5.4.5), and in [Cressa cretica]. Several grasses living in saline environments, such as [Sporobolus pungens] (Fig. 5.4.6), which is confined to the salt-spray zone of the beach, also excrete salt on their leaf surfaces. 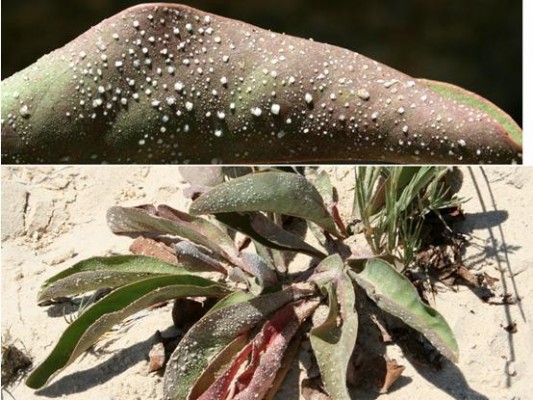 Fig. 5.4.5: Species of Limonium also have salt-excreting glands on their leaves. Limonium narbonense may serve as a source of salt. 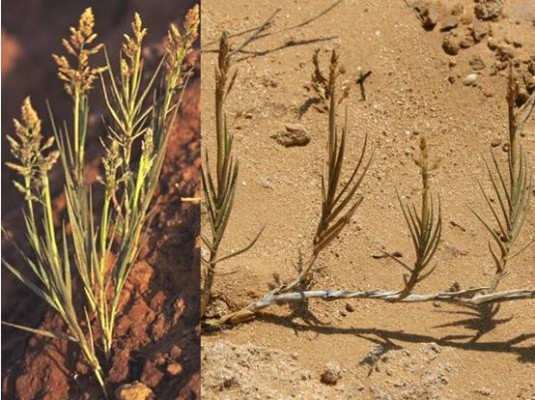 Fig. 5.4.6: A few grass species, such as Sporoblus pungens, grow in salt-rich habitats and have salt-excreting glands on their leaves.

Salt may be collected manually from all the plants mentioned above; the stems may be covered by a plastic bag and shaken. Since dust grains are collected together with the salt, one can clean the salt for a long use by dissolving it in water and straining this solution through a cloth into a cup or bottle. Using plates to dry the clean solution may be a good procedure. I assume that if you are in a hurry, using salt with dust is not “the end of the world”.

Components of etheric oils named thymol and carvarcrol are the compounds responsible for the scent and taste known in Arabic in the East Mediterranean as “za’atar”. In Latin-related languages the names are “marjoram”, “mayoran”, “thyme”, and “oregano”. Most of the following species may serve as spices having these essential oil components: [Majorana syriaca], [“Origanum isthmicum” Origanum isthmicum], [“Origanum jordanicum” Origanum jordanicum], [Satureja thymbra], [Satureja thymbrifolia], [Satureja nabateorum], [Coridothymus capitatus], [Thymus bovei], and Thymus decussatus (growing only in S. Sinai and not represented in our website).

[Thymbra spicata] contains the necessary compounds, but since it is not recommended for use by the people living in the rainy part of the country, where it grows, we also suggest not to use it. The others are used as an addition of green leaves to salads or are cooked, or added as a powder after drying and grinding. When contributing my seminar on the Labiatae as a student, I added two spices to my lecture: fresh bread was dipped into olive oil in which [Majorana syriaca] and [Coridothymus capitatus] leaves were fried. A lot of health was added there by [Micromeria fruticosa] tea (Fig. 5.4.7). The spice “za’atar” found in the markets of Israel and Jordan (as far as I could see), has great meaning for many people of these countries, in the memory of their birth place. No words can replace the culinary memories of the round thin bread richly covered with sesame seeds sold with za’atar powder in a small envelope made from second-hand paper (for many years it was made from the pages of telephone books). This powder contains four components: powdered [Majorana syriaca] leaves (Fig. 5.4.7 left), the powdered cover of [Rhus coriaria] fruits (Fig. 5.4.8, 5.4.9), fried sesame seeds, and salt. 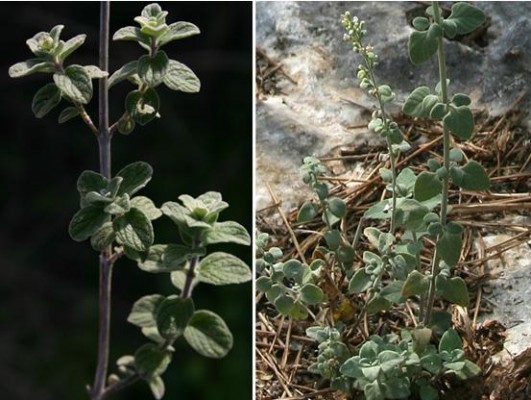 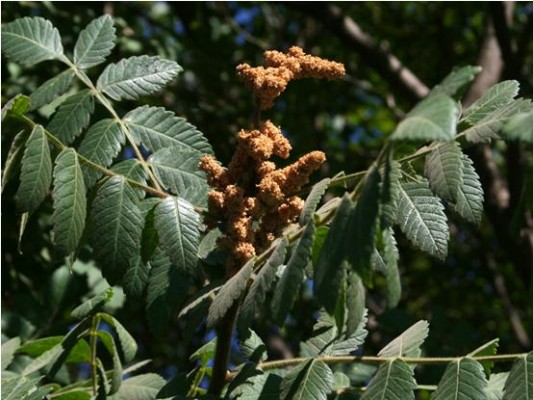 Fig. 5.4.8: Rhus coriaria has edible red–colored fruits. By soaking the fruits in water one may prepare a lemonade-like beverage. 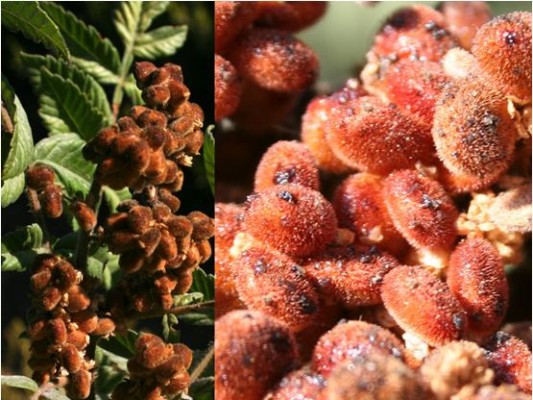 Fig. 5.4.9: Grind the Rhus coriaria fruits and separate their cover powder from the hard seeds. This powder (well known as “sumac”) together with the powder of dry Majorana syriaca leaves are the main components of the E-Mediterranean spice “zaatar”.