Israel is one of the places on earth where the domestication of plants started. The annual grasses [Hordeum spontaneum], [Triticum dicoccoides], [Aegilops geniculata] and other species of [Aegilops], contain in their diaspores a large seed accompanied by other organs assisting their dispersal. This assistance enables the plants to improve their ability to withstand the primary difficulties they meet in their habitat. Large seeds contain a high quantity of food reserves aimed at assisting in competition with the neighboring plants. Awns, hairs, bristles and sharp teeth present on the surface of the diaspores increase their ability to penetrate into fissures in the soil. In these sites they are protected from many dangers. Let us now try to show how to reach the seeds, just as the people of ancient periods did, when the human populations were known as food-gatherers. To be accurate – I started to eat plants in the field many years before I knew about the nutrition of the “gatherer-populations”. My aim in this chapter is to make a kind of a short-cut to edible plants for the reader. Not all plants are edible and lack of knowledge may lead to complications. 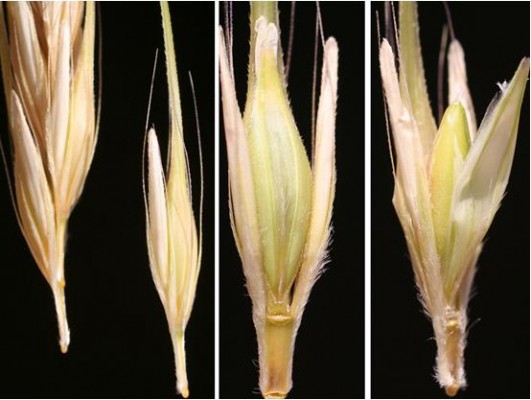 Fig. 5.3.1: A grain of Hordeum spontaneum on its way to the mouth of someone who knows how to peel it. Left: a spike with its lower part detached, forming a diaspore, including part of the spike axis; center: a diaspore with the large grain covered by the stiff palea and lemma; right: the lemma carrying an awn separated from the palea, exposing the grain.

[Hordeum spontaneum] is one of the common ones in its group and may be consumed raw. When blooming, the spike is vertical. Later, towards ripening, the spike becomes horizontal and the parts accompanying the grain are still green. This is the appropriate stage at which to use the plant’s grains, because later, when drying out, the spikes shatter and split into diaspores and [HORSPO fall onto the ground]. In order to obtain the grain, disconnect one diaspore from the base of the spike (Fig. 5.3.1 – left). Hold the sharp part of the diaspore with your fingers and turn it so that the lemma with the awn splits from the palea, and the grain becomes free. Before eating, be sure that the grain is clean (does not contain any remnant of the stiff tissues). If this tissue is mistakenly eaten and you feel rough parts in your mouth, do not take any chances – spit it all out. Evidently, this is not a food for young children. The adult may start getting used to eating the wild barley “by the way” after the 3rd grain. When ancient populations discovered that the barley contains food reserves which are hard to reach, they developed a “by-pass”. Herds of sheep and goats eat the barley and when the time comes, the meat of the herd which was nourished by the wild plants is consumed. No less happy was the discovery of beer-making from the domesticated barley. Micro-organisms ferment the nutritional reserves in the seeds and the result produces this beverage (which is very tasty for millions on earth). 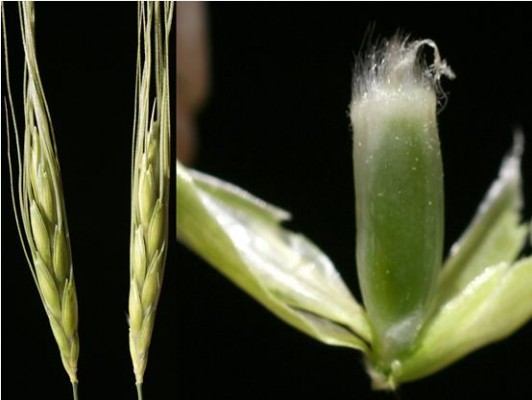 Fig. 5.3.2: A pair of spikes of the wild wheat (Triticum dicoccoides; left); the grain is exposed after removal of the stiff palea from the lemma.

The wild wheat ([Triticum dicoccoides]) grows in the rainy parts of the country, in open grasslands that do not suffer from high grazing pressure. The high similarity between the spike of the wild wheat and the wild barley “hid” the wheat from visiting botanists for several centuries. Here too, one must discover the large and tasty grain, among the hard covers protecting it and assist its penetration into soil fissures (Fig. 5.3.2 and the [Triticum dicoccoides] webpage). While it is easier to obtain the grain from the cultivated wheat spike than from cultivated barley, it is easier to do it in the wild barley when compared to the wild wheat. 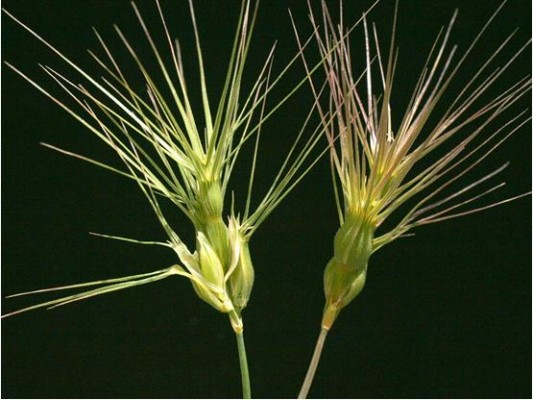 Fig. 5.3.3: A pair of spikes of Aegilops geniculata. The stiff palea of the lower spikelet is removed from the lemma and the grain is exposed. 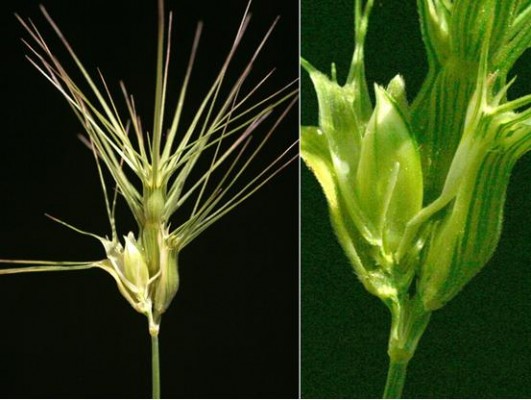 Fig. 5.3.4: A close-up of the exposed grain of Aegilops geniculata.

A short review of past domestication through the use of plants from Israel will bring us to the peas as well. The three wild peas – [Pisum fulvum], [“Pisum sativum” P. sativum], and [“Pisum elatius” P. elatius] are not poisonous. Their seeds and young fruits are edible. However, similarity in flower morphology may lead people to the [Lathyrus] species. Sensitive people may be affected badly by the latter and should avoid it. The prominent difference between the [Pisum] and [Lathyrus] species is the ratio of the stipules and the leaflets. In [Pisum] the stipules are larger than the leaflets whereas in [Lathyrus] the stipules are smaller than the leaflets.

We dealt earlier with [Urtica pilulifera] as a reservoir for water in its stems and with leaves that may be used to replace spinach. Here, among contributors of edible seeds it has an honorable position. When the inflorescence “balls” are dry, their bristles do not sting as in the green ones; crushing a few releases the seeds into one’s hand. A light wind may help to separate the heavy seeds from the lighter parts. When you have collected a handful of these black-brown seeds you may eat them like sesame seeds. I have never tried to improve the taste by roasting them, but I advise laying the seeds on a metal pan over burning charcoal for a short while. I am sure that if I knew how to prepare “health” bread I would make a version with [Urtica pilulifera] seeds. In previous chapters species of [Malva] and [Lavatera] were mentioned near [Urtica]. They continue to remain neighbors here as well. Young fruits of [Malva] and [Lavatera] are ready to be eaten when young (Fig. 5.3.5). The fruit reminds us of sliced bread and finds its way into the vernacular names in Hebrew and Arabic with “bread” in the name’s roots. 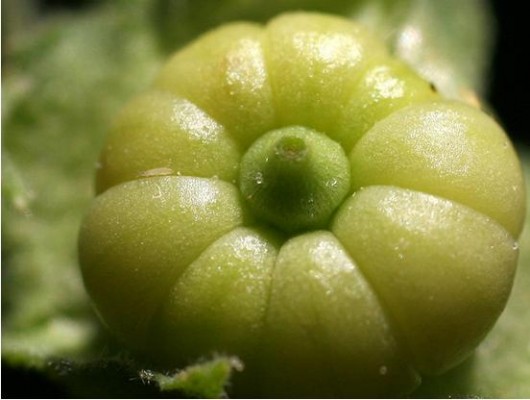 Fig. 5.3.5: A young fruit of Lavatera cretica ready to eat; it resembles a sliced loaf of bread.

[Gundelia tournefortii] was mentioned earlier when cooking the leaf base and the young inflorescences. Here, when dealing with seeds, it is necessary to go into the flowering-head morphology to understand their position. The [Gundelia] flowering-heads (Fig. 5.3.6) have a rather unique morphology in their family – the [http://flora.huji.ac.il/browse.asp?action=browse&group=1 Asteraceae (Compositae)]. The compound inflorescences are carried at the tip of the stems; the single yellow flowers with five petals (in fact five corolla lobes) are arranged in small capitules. In each such capitule there are several male florets (Fig. 5.3.7) distinguished by a yellow column emerging from the center of the floret. At the center of Fig. 5.3.8 there is one unit with a relatively big hole, surrounded by six small ones; this was a single female floret surrounded by six male florets. When looking again at Fig. 5.3.7 a pair of red stigma lobes of the female floret can be discerned. The dry red-purple remnants in Fig. 5.3.8 are dry corollas of the two types of flowers. Each small capitule is situated at the axile of a long, spiny bract (Fig. 5.3.9 – left). The involucral bracts of the small capitule are united in their base, subtending the single fruit=achene=seed of the capitule (Fig. 5.3.9 – right). The tips of the involucral bracts of the small capitule are free and they are the small spines. If you have had the patience to read the long explanation, you have the right to eat the big white seed. The season for this is short; when young there is not much to eat, and when old the protecting tissues become too hard. To eat one has to hold the small capitule between the teeth and apply pressure that will push the seed through the capitule base. If you were hungry while reading the explanation, please excuse me – this is my way of explaining botanical complexities. 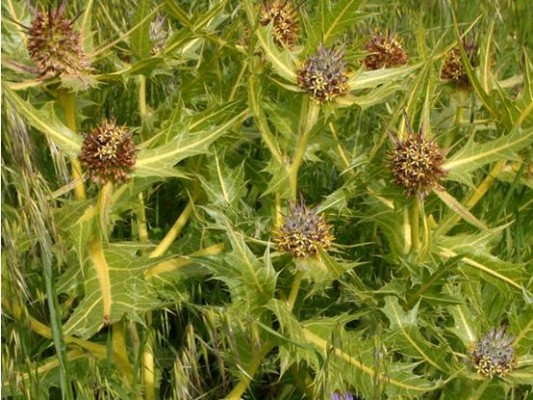 Fig. 5.3.6: Gundelia tournefortii blooming; a few flowers in each compound capitulum are open. 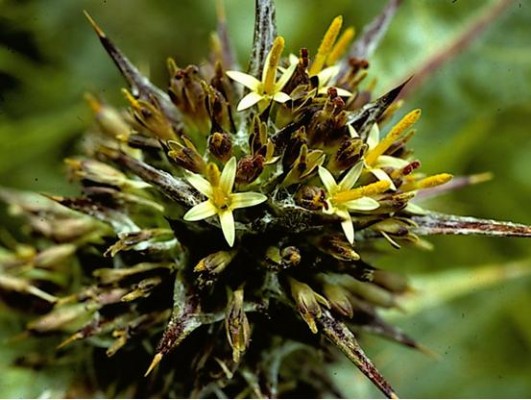 Fig. 5.3.7: A compound capitulum of Gundelia tournefortii blooming. The opened flowers, with a yellow column in their center, are male. Left of the lower right flower the two red stigma lobes of a female flower are seen. 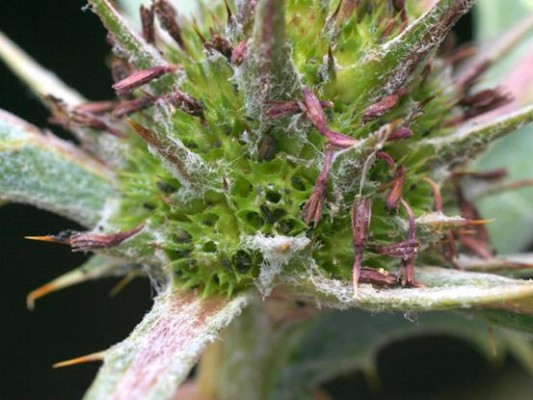 Fig. 5.3.8: A compound capitulum of Gundelia tournefortii after blooming. The red-purple remnants are of former flower corollas. In the center of the photo is a single capitulum with a large hole after shedding the female flower, surrounded by several small male flowers. 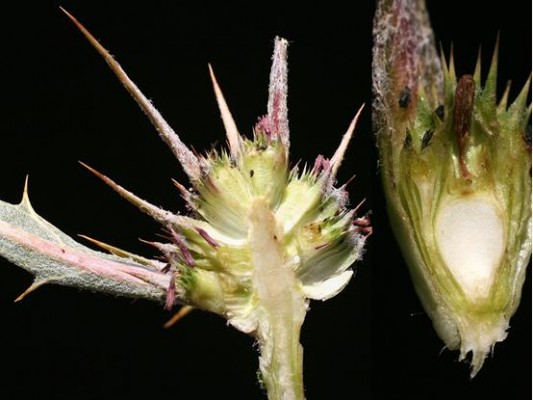 Fig. 5.3.9: A longitudinal section of a capitulum of Gundelia tournefortii (left) displaying the small capitules, each at the axile of a long, spiny bract, covered with long hairs; a section in a single small capitule with a prominent ripening one-seeded fruit.