Some six years have passed since we aired my website Flora of Israel Online and I have not yet had an opportunity to explain to the user the meaning of the parameter “affinity to disturbed habitats,” and why I inserted it for each species. This property has a personal history and I wish to share it with you. In 1987, I participated in the International Botanical Congress in Berlin, and became acquainted with Prof. Laco Mucina from Slovakia (at present in Australia). At that time, he dealt with plants of disturbed habitats and invited me to a session in the congress where these issues were discussed.

Many participants in this session were researchers from Berlin, which was surrounded at that time by the famous wall. Botanists for whom air was the only travel option available for distances far from their homes, carried out in-depth ecological studies within the range of their own towns. Lists of the species were prepared using appropriate vegetation records, arranged by their affinity to human induced habitats. The term used for this classification is “hemeroby,” derived from the Greek. In addition to many articles in German, a few articles were published in English. Upon returning from the congress I decided to use my experience in this field and provided each of the species in my list of species of Israel and Jordan with a grade from 1 to 5 in their affinity to human activity. The grades are:
1. Species growing only in natural habitats (2046 species).
2. Growing mainly in natural habitats but also in habitats disturbed by human activity (synanthropic – 389 species).
3. Growing approximately half in natural habitats and half in synanthropic (108 species).
4. Mainly synanthropic but also in natural habitats(107 species).
5. Growing only in human induced or human created (by disturbance) habitats (216 species).

I analyzed the efficiency of the indicators to the level of disturbance and was happy to see that “it works” for small as well as for large ones. For example, near Beer Sheva, on an area of loessial soil, there was a clear difference in the level of “hemeroby” indicated by species growing on and near a trampled area by a footpath and an area 5-10 m away on soil protected by barbed-wire.

The list of all species present in vegetation records of the Judean Desert was analyzed. Sheep and goats grazing at high intensity may remove the canopy of many species while they are still undeveloped. The expectation was that a large percentage of plants would have an affinity to disturbed habitats. It became clear that the situation was different; most species belonged to grades 1 and 2. It is possible that a long evolutionary time of grazing regime by natural or domesticated grazers brought about the development of grazing-resistant species. These species have a low affinity to physical disturbance of the soil. My students in the course “Vegetation of Israel” analyzed lists of species they recorded during our excursions. When my website was constructed we inserted this parameter into the page of each species to make it available for investigations in local and large areas. As long as urbanization increases, the size of natural habitats decreases and the “hemeroby” parameter may assist in monitoring the disturbance quantitatively. I recommend that researchers and teachers make use of this parameter in the study of disturbance.

Many of the people knowing the flora of Israel use their personal observations or observations presented in literature, to classify xerophily of plants. The relationship between species distribution and local aridity has been studied in many countries. French and other European researchers developed an information system which they called “Ecological Groups” (groupes ecologiques). This is a complicated method of recording and calculating and I am sure that this field of investigation continues to develop at present as well. The parameter of “xerophily” waited many years before I wrote it in the present chapter, following a long discussion I had in the summer of 2011 with my friend Ilan Zaharoni. We argued about the degree of xerophily of Mount Gilboa. Following this I decided to evaluate each species in my data base as to its position on the xerophily scale, based on my subjective evaluation after many years of phytosociological-ecological research. In this issue, I wish to produce indicators for xerophily that will serve the users of my website and help in seeing a more complete view of the vegetation in our area. We shall search here for the relationship between different species and their affiliation to the environment. Plants may function as indicators for the local climate. The numerical grades are not decimal and the distance between one grade and another may not be equal to the distance between these and a third grade. I believe that after providing the xerophily value-grades for all the species this parameter will be useful.

The grades are:
1. Floating, immersed, or submersed plants
2. Hydrophytes, growing near springs, canals and waterways
3. Hydro-Halophytes (growing in wet saline soils)
4. Plants growing among shaded moist rocks
5. Herbaceous vegetation in the range of 300-1000 mm
6. Psamophytes (plants growing on sand or sandy soils) of the Mediterranean zone
7. Tall shrubs and trees of the Mediterranean maquis
8. Semi-shrubs and low shrubs of the Mediterranean zone
9. Semi-shrubs, shrubs, and trees of the wadis of steppes and deserts
10. Montane semi-shrubs, shrubs, and herbaceous plants
11. Shrubs of semi-steppe bathas and shrub-steppes
12. Soil pockets in rock outcrops of Mediterranean and shrub-steppes
13. Shrub-steppes on saline soils (xerohalophytes)
14. Psamophytes of steppes and deserts
15. Desert annuals and geophytes
16. Annuals of saline desert soils

By the end of August 2012 I had completed the preparation of the data base with the factor “coefficient of drought resistance” or xerophytic parameter (“X” as follows) following the above key. I then obtained plant lists from 6 squares of 5 by 5 km. The plant lists produced from the data base are in alphabetical order. Therefore, if I study the first 20 species in the list there is no bias in any ecological direction. I marked the X parameter of the list and summed up the value for the first 20 species. The results are:

My first conclusions were that the attempts to provide an effective parameter to obtain the xerophytic position of the site look well and agree with my expectations. To continue the investigations I prepared transects perpendicular to the isohyets (lines linking sites with the same amount of mean annual rainfall).

The transects were: 1. coast and Bet HaArava in the Dead Sea Valley, 2. Between Ashdod near the Mediterranean coast, 3. Between Emek HaElah in the foothills of the Judean mountains and Mashabe Sade. Vegetation transects are drawn along these two lines (in Chapters 8 and 9 in the “Vegetation of Israel”…). The addition of lines showing the xerophytic position may assist in understanding the vegetation – environment relationships. An additional transect across the Upper Galilee and the Golan was done for comparison with the drier parts of the country. 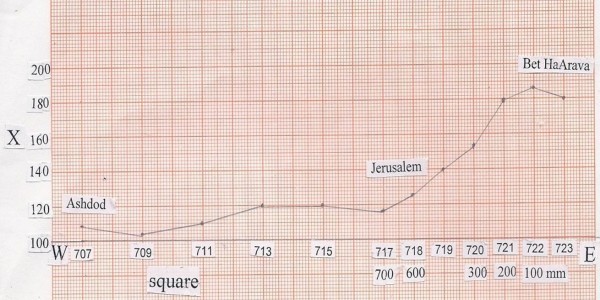 The left part of the transect, from the Mediterranean coast to Jerusalem, displays a gradual rise from X=105 to X=120. East of Jerusalem there is a steep rise of the X values, in full agreement with the term “rain shadow” given to the Judean Desert in literature. There is a steep drop in the mean annual rainfall from west to east and a steep rise in the mean annual temperature. The X coefficient, based on the lists of species in the squares traversed displays these climatic gradients and reaches X=216 in the Dead Sea Valley. 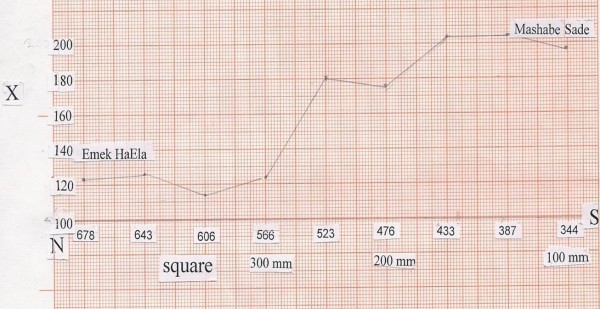 Fig. 10.4.2. A transect along Israel (from Emek HaEla to Mashabe Sade)

In this transect, the squares selected are at almost the same altitude. Therefore there is no change in the temperature regime, which is important in transect 10.4.1. The distance between the isohyets in this moderate transect is rather long. The X coefficient displays here a significant rise from square 566, where mean annual rainfall is 300 mm; X= 125. In square 344 mean annual rainfall is 100 mm and X=194. The two transects terminate in a landscape of desert vegetation and X=200 in the area of the 100 mm isohyet.

Fig. 10.4.3. A transect across Israel in the Upper Galilee and the Golan

The transect from Akko (Acre) eastwards to Rujum Hiri in the Golan passes through the most humid part of the country. The gradient of distance from the sea coast is known in many countries, however, it is not seen in the present transect. Here, all the transect dots are less than X=120.

The three transects presented here display the efficiency of the X coefficient in finding the drought level of a studied area. We may return now to the Gilboa and compare its level of X coefficient:
1. Square 979 including Gan Ner, X=126.
2. Square 967 including Fakua, X=128.
When comparing this data to Fig. 10.4.1, the Gilboa resembles the X value of Jerusalem (square 719) or in Fig. 10.4.2 that of the Mediterranean territory with a slight touch of the semi-steppe bathas.
I assume that in the future, with the upgrading of this website, the builders will enable the users to apply it to all plant names recorded in the study square. I hope that we shall be able to display the X coefficient in a map or a list of all squares with more than 40 species. When we analyzed the flora of Israel in 1985, I was assisted by Motti Schneider, a Ph.D. student in Florida State University (FSU). The parameter used then was the frequency of the chorotypes (phytogeographical elements) in squares with more than 40 species. The result was [http://flora.huji.ac.il/browse.asp?action=content&keyword=%D7%A6%D7%95%D7%9E%D7%97%D7%99%D7%A9%D7%A8%D7%90%D7%9C%D7%902 a new phytogeographical map of Israel and Sinai (Danin & Plitmann 1987)]

Table 1. Results of the study of X in three transects 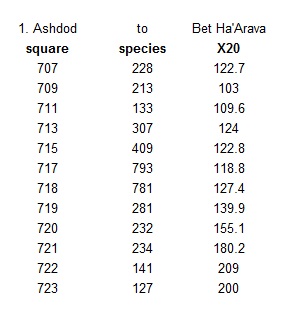 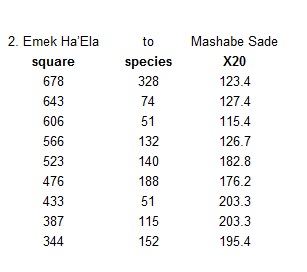