At the beginning of the season in rainy years, wheat and barley fields are planted south of Lehavim. In fields that were not fertilized (Fig. 9.1.16), dark colored projections develop, that look like small hills. These “hills” are nests of harvesting ants that have been mentioned in other places in [usefulplantsh1 our website]. The barley on the left in Fig. 9.1.17 is smaller and lighter than the barley next to it. The large one comes from the dark “hills” in the fields, whereas the small, light one comes from the area among the nests. In uncultivated neighboring areas, [Chrysanthemum coronarium] plants constitute the “hills” (Fig. 9.1.17,right) and the explanation is the same as the one given for the barley “hills”.

An uncultivated field is displayed in Fig. 9.1.18. An anemone field west of Khorvat Pura typifies unfertile soil in that area (Fig. 9.1.19); large plants of C. coronarium, [Silybum marianum], and [Sinapis alba] have developed around the nest. These plants use the fertile soil efficiently and reject their competitors. The loessial soils, south of Lehavim and down to Tsomet HaNegev are ploughed each rainy year for growing grains. Plants resistant to cultivating have a biological advantage. The most prominent one is [Achillea santolina] (Figs. 9.1.21, 9.1.22), a perennial herbaceous plant. Its parts above the ground become dry in summer whereas the underground rhizomes continue to be active at low intensity. When cut by the plow, the rhizomes do not die, and sprout again in winter. The plant community of the weeds in grain fields is named after Achillea santolina. One of the typical companions of A.santolina is [Hyoscyamus reticulatus], a poisonous plant (Figs. 9.1.23, 9.1.24). 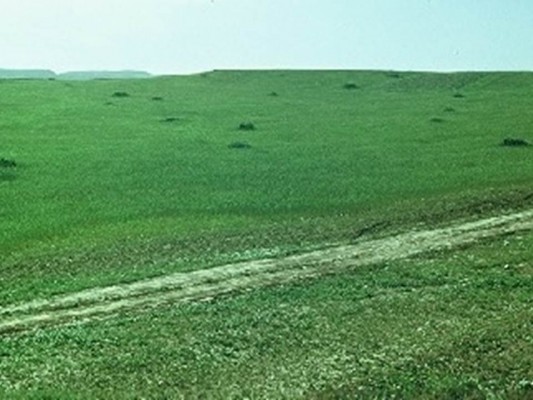 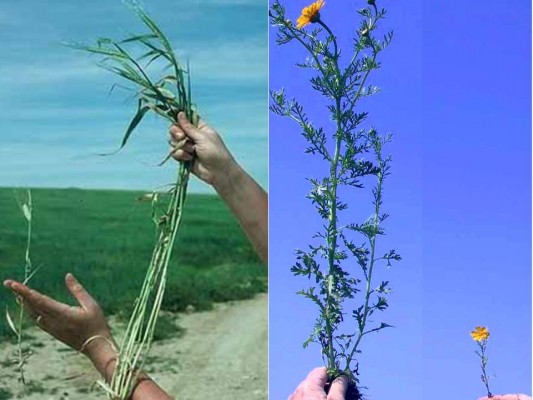 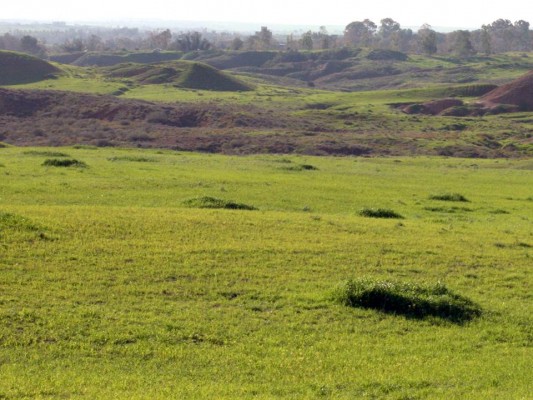 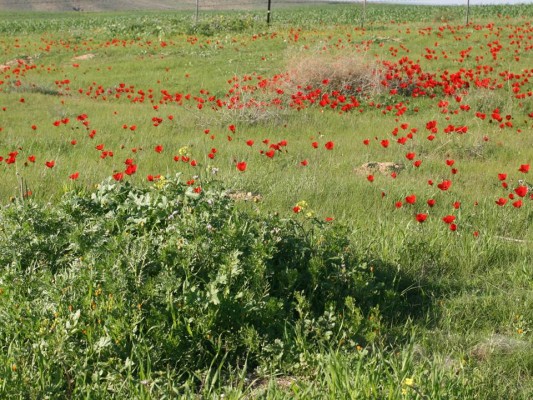 Fig.9.1.19: An uncultivated field with poor soil, rich in Anemone coronaria; near the ant nest with fertile soil, ruderal plants such as Chrysanthemum coronarium and Sinapis alba outcompete the anemonies 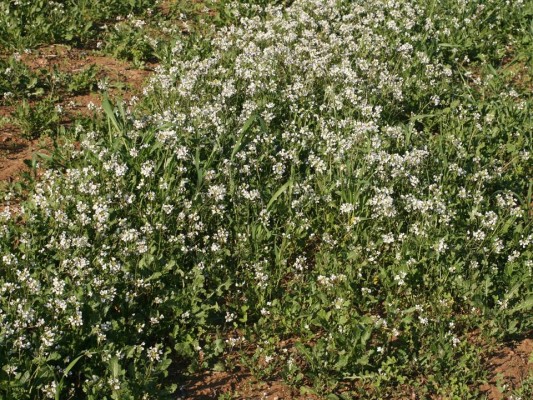 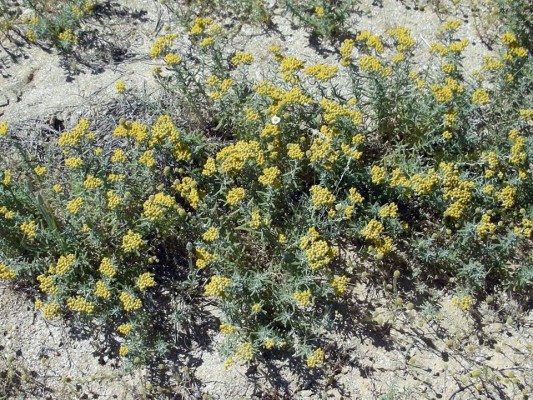 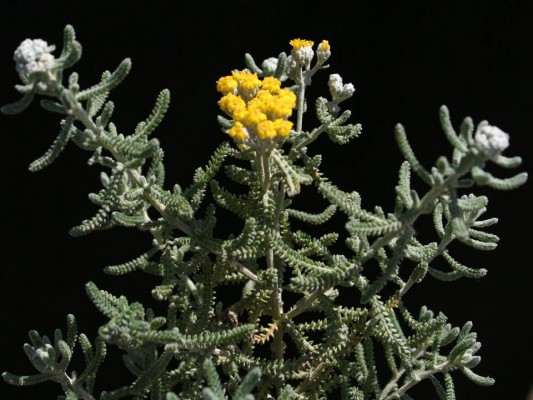 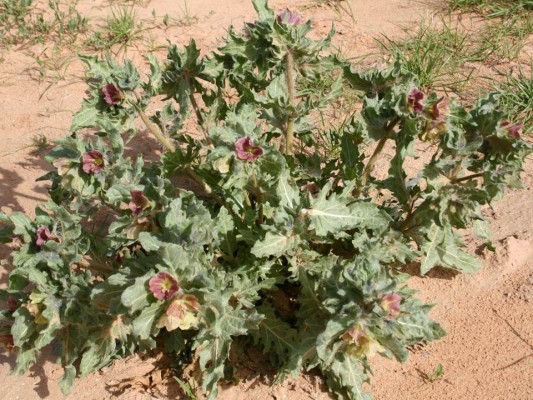 Fig.9.1.23: Hyoscyamus reticulatus is a weed growing among grains crop on ploughed loessial soil in the range of 100-250 mm mean annual rainfall 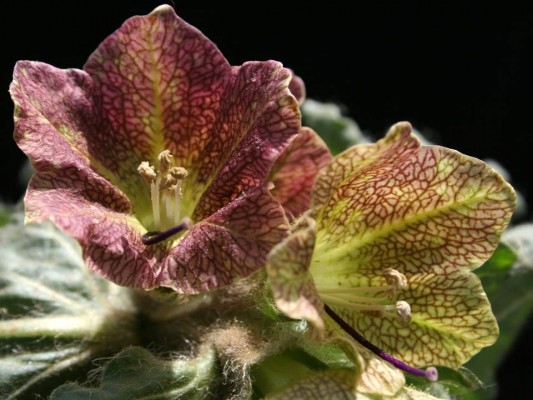 Fig.9.1.24: A unique vein network on the corolla in the genus and in the entire flora of Israel. A poisonous plant that sends many children to hospital when they try to taste it

Most of the area in the precipitation range of 200 mm is affected by human activity. Natural areas are extremely rare. A small part of the hills north of Beer Sheva is left under light disturbance, mainly overgrazing by Bedouin herds. The dominant semi shrub of these hills is [Noaea mucronata] (Figs. 9.1.13, 9.1.14). A large number of [Asphodelus ramosus] tufts (Fig. 9.1.25) accompany the semi shrubs. There are years when A. ramosus seems to be the commonest plant all over the hills. Human interference appears to give this plant a biological advantage, hence it abounds. Additional plants of the shrub-steppes occur here, such as: [Astragalus sanctus] (Fig. 9.1.27, left) and [Salvia lanigera].

Astragalus is a representative of a genus rich in species and has dozens of species in the steppes and desert areas of the Middle East. There are at least eight Astragalus species on the Beer Sheva hills. It is hard to recognize them in dry years, but they flourish in rainy years. A small shrub with soft branches is [Centaurea aegyptiaca] (Fig. 9.1.28). It is called by the Bedouin “mourar” (from the root of mar = bitter) and its soft branches protect it from being cut for fuel. When the sun rises, its tubular florets are ready for the visiting bees. When they touch the projecting anther-tubes the latter shrink and bring up pollen grains ready to become attached to the bee’s body. 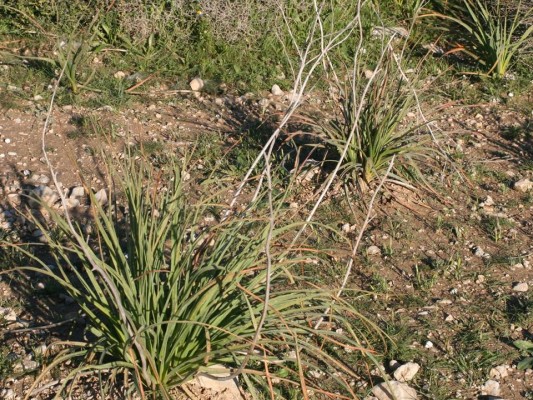 Fig.9.1.25: Asphodelus ramosus abounds in areas with overgrazing and cutting of lignified plants 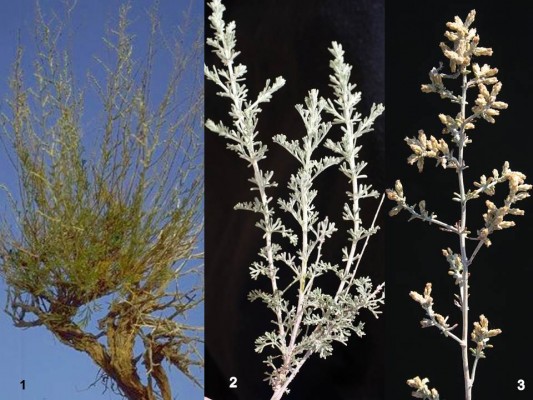 Fig.9.1.26: Artemisia sieberi. 1. A small shrub divided naturally into several independent parts each of which has its own roots, 2. A branch in winter with large leaves covered with white hairs that reject solar radiation, 3. A branch carrying inflorescences and minute leaves 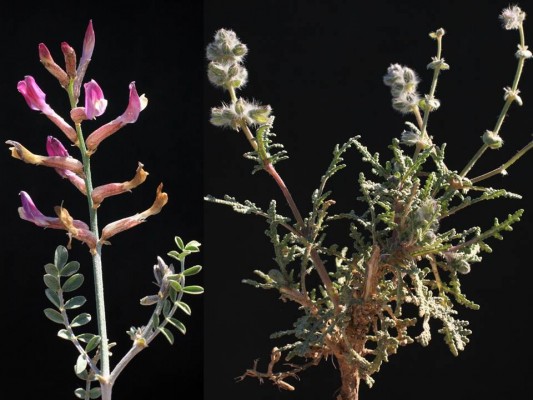 Fig.9.1.27: Astragalus sanctus in the winter of a rainy year; on the right – Salvia lanigera – a typical semi-shrub of shrub-steppes 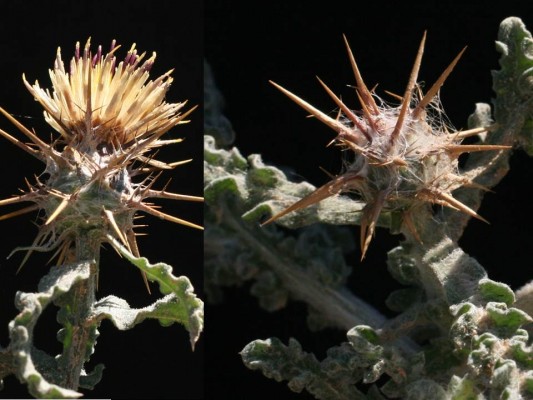