The transect from the Shefela hills (Fig. 9.1.1) near Emek HaEla to Mash’abbe Sade in the Western Negev passes along a moderate rainfall gradient. Viewing the isohyets map (Fig. 9.1.2, left) one can see a gradual decrease in the amount of rainfall from north to south; the isohyets in transect 2 are distanced from each other compared to their proximity in transect 1 (from Jerusalem to the Dead Sea). In a map I displayed on my computer screen, I found that the distance between the isohyets of 500 mm and 100 mm is 70 mm in transect 2 whereas in transect 1 it is only 25 mm. We may conclude here that the precipitation gradient is 3 times steeper in the first transect than in the second. Altitude is similar in all the stops (300-400 m above sea level), therefore the temperature regime is also similar (Fig. 9.1.2 on the right).

The hills studied are all of the same geological entity – hard chalk of the Tsora’a Formation, Lower Eocene. The two transects can be used to display the unique position of Israel in a transitional area between the Mediterranean phytogeographical region with dense maquis of [Quercus calliprinos] and [Pistacia palaestina], and the Saharo-Arabian region with sparse vegetation of drought-resistant shrubs such as [Zygophyllum dumosum]. While the first transect passes different rock-soil types and altitudinal levels, the present one passes sites of the same rock type on a similar elevation; in this way we isolate to a high extent and display the impact of mean annual rainfall on vegetation development.

Looking northward from HaEla junction (Fig. 9.1.1), we meet for the first time the rock that accompanies us all along the transect. The white cliffs north of us are of the chalk of Tsora’a Formation (lower Eocene). The rock layers are prominent, as seen often in sedimentary marine rocks. The crest top is covered by unlayered rocks known as Nari rocks, which will be discussed later in a separate chapter. The green shrubs on the slope above the white cliff are of Pistacia lentiscus. At the crest’s top there is a well-developed site of the [Ceratonia siliqua] – [Pistacia lentiscus] association. This association is the most common vegetation of the Shefela hills and the lower belt of the mountains of the Mediterranean part of the country (unit 5 in the vegetation map of Fig. 9.1.2). At the contact line of the green fields and the slope on the left side of Fig. 9.1.1 there are grey-brown trees. These are the Sudanese [Faidherbia albida] trees; this population is one of the few scattered points where this tree grows in Israel. Gideon Halevy, who studied the tree distribution, suggested that single seeds penetrated inland by floating in waters of the sea that preceded the Mediterranean Sea in its present proportions. F. albida does not ripen seeds as a result of self-pollination. The isolated populations of the Shefela, Coastal Plain, Esdraelon Plain and Bet-Shean Valley are inaccessible to bees flying from place to place. F. albida reproduces locally by sprouting root-borne shoots. Hence we may look upon the woodlands or savannas of F. albida in Israel as single individuals.
The Ceratonia siliqua –Pistacia lentiscus association (Fig. 9.1.3) is well developed among the Nari rocks. Seedlings of the maquis trees and shrubs are protected from competition with annuals in the crevices and fissures of this rock. The annuals out-compete the trees and shrubs in sites with deep soil. The impact of the rocks on vegetation is prominent when one compares Fig. 9.1.1, where the slope above the cliff is sparsely vegetated, with Fig. 9.1.3. The south-facing slope in the latter is densely vegetated due to the Nari’s impact. Run-off from the rocks to the soil around them enriches the soil pockets and ameliorates growth conditions. The north-facing slope opposite Fig. 9.1.3 supports the dense [Quercus calliprinos] and [Pistacia palaestina] association (Fig. 9.1.4). The high density of shrubs and trees on this slope overshadows the annuals that are better adapted to open areas. As in other places in Israel, these two associations replace each other according to local conditions. The north-facing slope receives less effective solar radiation, which leads to the difference in occurrence. 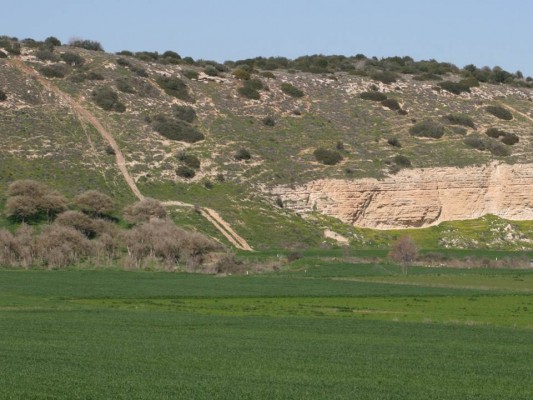 Fig.9.1.1: A cliff at the margin of Emek HaEla. The chalk of Tsora’a formation was sedimented during the Eocene epoch in the Thetis Ocean and has prominent layers. A few shrubs of Pistacia lentiscus are seen on the slope above the cliff. On the top of the crest, among Nari rocks the Ceratonia siliqua – Pistacia lentiscus association develops densely; at the margin of the green fields on the left side a dense wood of Faidherbia albida has developed 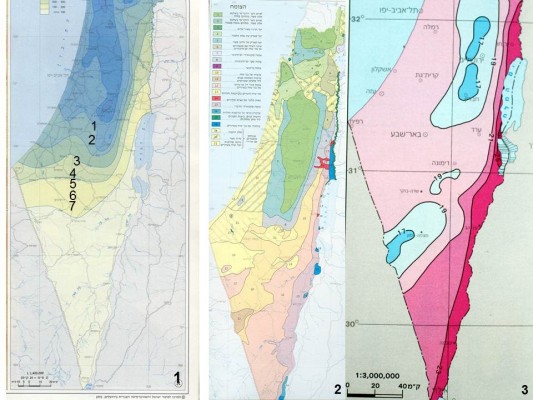 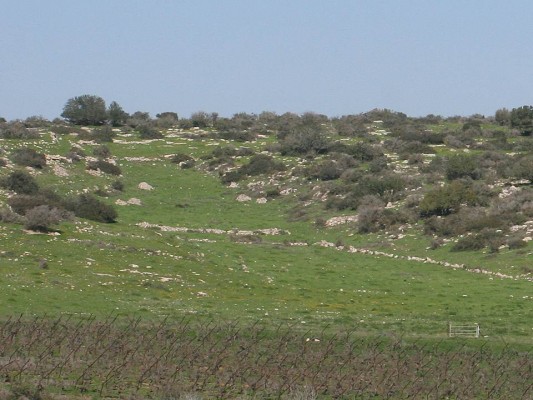 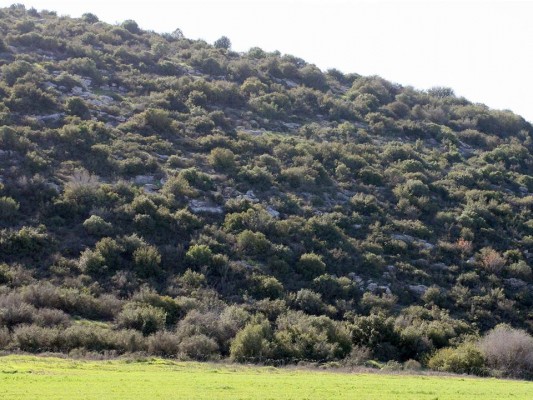