During the aging of the crust, lichens begin to establish themselves near the edge of the polygons (Figs. 7.1.14, 7.1.15). The flat area of the early stages of development, when cyanobacteria prevailed in the area, loses much water as a result of run-off. As the area becomes uneven (Fig. 7.1.16) water loss to run-off decreases, water penetration increases, and soil leaching proceeds. Mosses and liverworts become established in lower sites of the crust (Fig. 7.1.17). As the crust becomes coarser, its efficiency as dust trapper increases. The brownish soil layer accumulated above the light-colored Lisan formation may be seen in pits dug in the area. In a small wadi at Mt. Sodom (mean annual rainfall 70 mm), we studied the process of changes in the microbiotic crust (Danin et al., 1998). Figure 7.1.16 is an advanced stage of the crust development and the uneven soil surface at Mt. Sodom. 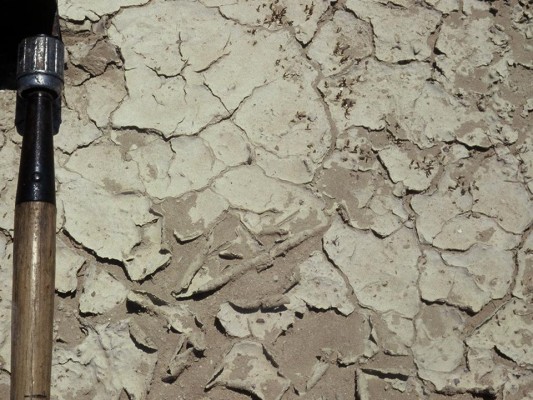 Fig.7.1.11: Cyanobacterial crust covers the entire area. At the lower part there are several polygons where the crust developed beyond the margin of the polygon and they are curved upwards 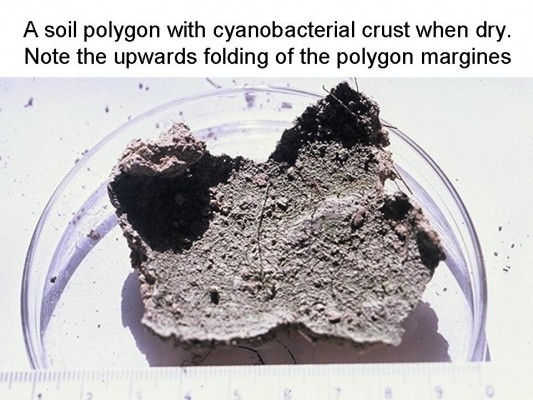 Fig.7.1.12: A polygon of cyanobacterial crust. Under contraction in the dry state its margins are curved upwards 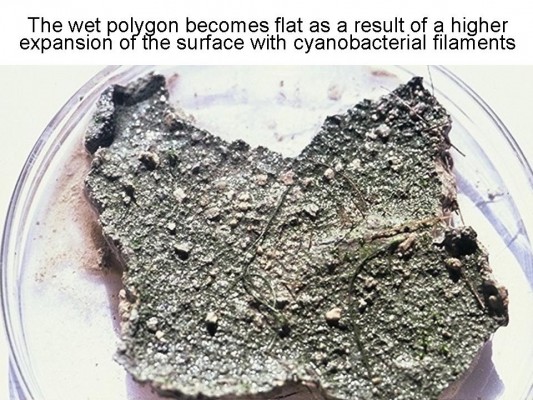 Fig.7.1.13: The polygon of Fig. 7.1.12 after wetting. The cyanobacterial crust swells and expands, thus flattening the polygon 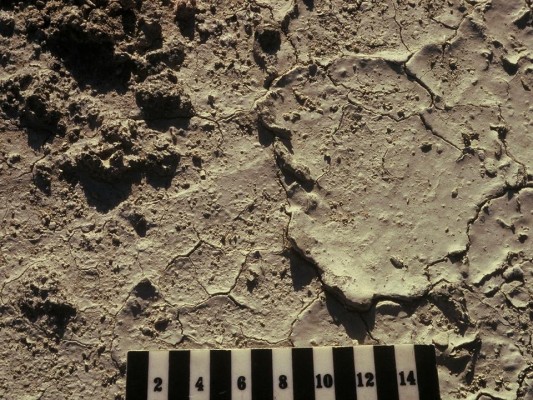 Fig.7.1.14: A mature cyanobacterial crust. In the polygon above numbers 10 to 14 of the ruler, the margins are turned up due to the growth of cyanobacteria and lichens 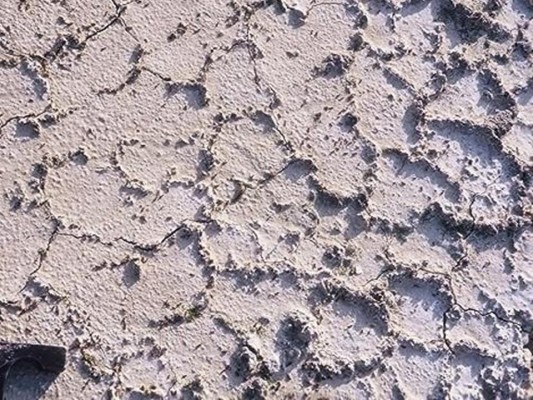 Fig.7.1.15: Polygons in a mature cyanobacterial crust. Lichens that have developed near the fissures at the polygons’ margin change the polygon’s microtopography 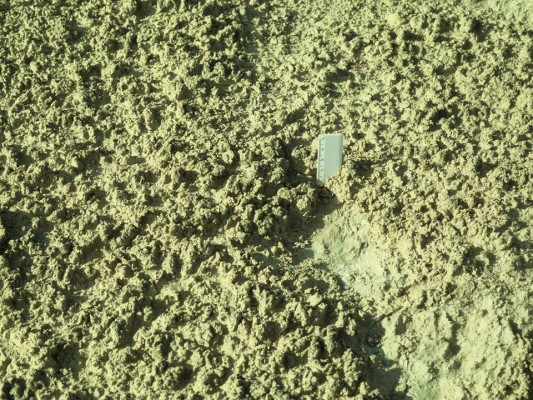 Fig.7.1.16: Mature surface of a wadi (watercourse) terrace in Mt. Sodom, where lichen growth above the cyanobacterial crust made the smooth area become rough 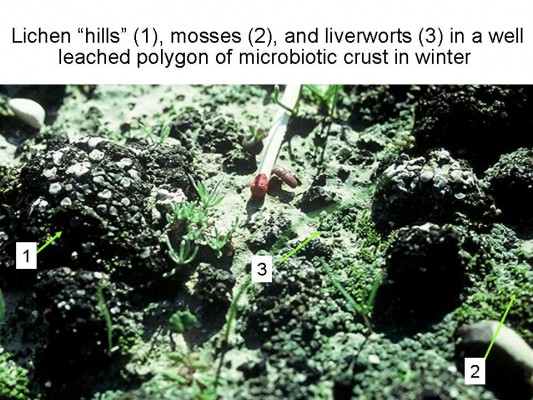 Most people observing nature in Israel hear “mosses” and think first of rocks in the shadows of moist woodlands of the Carmel or Upper Galilee mountains, where mosses form a green layer on the rock surface. Only a few people may consider the mosses as a component in arid and semi-arid environments. Mosses abound on continuous areas that receive 100-300 mm mean annual rainfall. We shall return to this issue after dealing with the study we made on the role of mosses in Makhtesh Ramon. This study was conducted in western Makhtesh Ramon (Fig. 7.1.18) on the slopes of the basalt hills of Karney Ramon. There is less than 100 mm mean annual rainfall there and the mosses we deal with occur in soil pockets, trapped in horizontal fissures in the rocks. Dust composed of silt and clay is carried out in the desert air and accumulates on the land surface annually as a layer 0.1 mm thick (these are the findings of Eli Ganor in his Ph.D. thesis). Rain water runs off the rock outcrops into crevices where mosses can grow. The dust washed from the rock surface becomes trapped among the moss leaves and stems.

Mosses may be a whole year in drought dormancy and resume activity one minute after wetting (Figs. 7.1.19b and 7.1.20 center). Dust arriving at the opened space among leaves and stems is trapped there and when the moss become wet its leaves expand and shut the openings. If conditions allow it, the mosses grow above the new soil. We photographed a whole cross section, 15 mm long, of a moss hardened with a polymer and polished (Fig. 7.1.11, right). In the latter figure one can see the gradual transition from an area with clear moss leaves with soil particles among them, to a soil zone where stem remnants are hardly seen. The dry desert climate enables remnants to stay longer than in moist areas where microbial activity consumes the organism remnants. Studying the components of the dust accumulated in the soil below the mosses we did not find even one grain of basalt.

There were microscopic fossils (nano-plankton) of algae indicating an age much younger than that of the rocks exposed in Makhtesh Ramon (Fig. 7.1.21). These algae were from the erosion of rocks outside the Makhtesh and were carried by the wind as dust, deposited on the basalt rocks, washed into the crevices and trapped by the mosses. These two findings prove the dust origin of the soil below the mosses beyond any reasonable doubt.

The mean annual rainfall increases gradually, north of Mizpe Ramon towards Be’er Sheva and Kiryat Gat. There is a small quantity of mosses in the rock crevices and in the soil below the rock outcrops in the Negev Highlands. These mosses trap a relatively small quantity of soil. However, in the Negev, north of Be’er Sheva, an area with an annual rainfall of 200 mm, there are large areas of loessial soils. When an area is closed to the trampling of humans and their domestic animals, a moss crust develops over the entire area. As in Makhtesh Ramon we deal here with perennial mosses which enter into drought dormancy and resume activity immediately when wetted. After several thousand years the growth of mosses above the accumulating dust may become expressed as soil a few meters deep.

The active layer is present in the top 1-2 mm and one can consider their development over the entire area from the process demonstrated in western Makhtesh Ramon (Figs. 7.1.19, 7.1.20). In moister areas north of Be’er Sheva one arrives at an area where the mosses are in competition with herbaceous annual plants. The taller plants over-shade the mosses. There is a large strip of land between the desert and the Mediterranean territory, where dust trapping and thus soil formation with the assistance of the moss is maximal.

The area of this intensive geomorphological activity existed in the past before human activity was as strong as it is now. However, the process continues at present as well but is disturbed in many places. When looking at the soil maps of Israel or when driving from Arad to Be’er Sheva and from there north- and westwards one may see considerable areas of loessial soils. 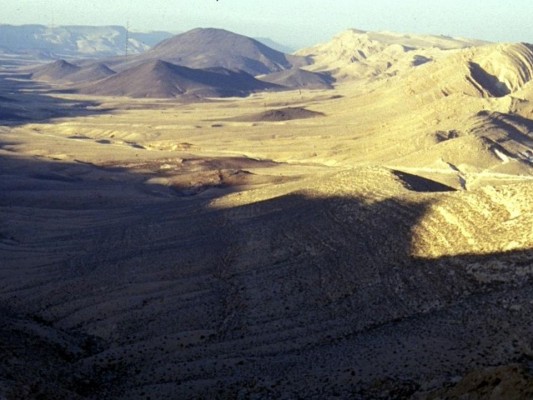 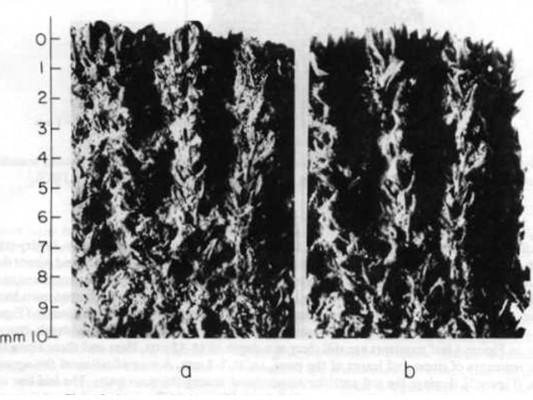 Fig.7.1.19: A close-up in the soil trapped in the body of the moss Encalypta. On the left, a dry state with leaves turned towards one another; on the right after wetting, with straight leaves 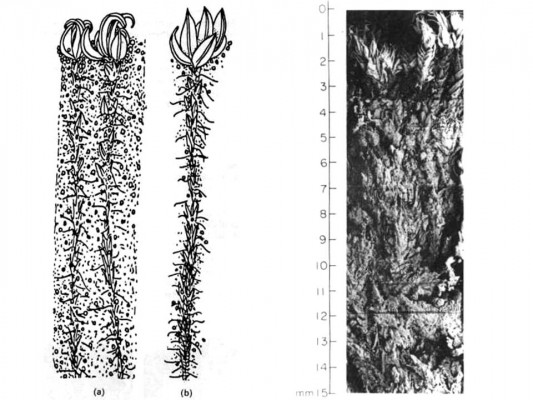 Fig.7.1.20: On the left a drawing of single stems of Encalypta. On the right a cross section in the moss Grimea mesopotamica. Leaves are seen in the upper part whereas only stem remnants are seen lower down 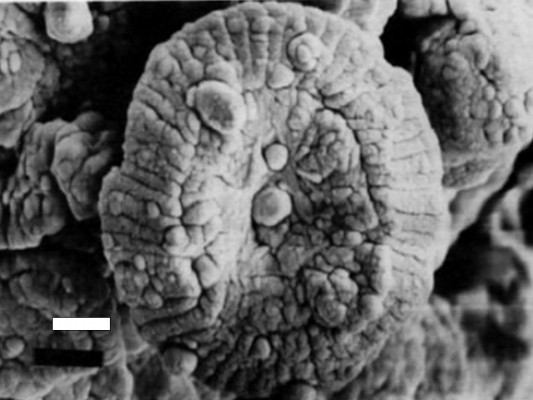 Fig.7.1.21: A minute fossil of the alga Coccolithes pelagius from the moss-soil. This organism lived floating in the Tertiary ocean water as nano-plankton. Rocks of this age are not found in Makhtesh Ramon, thus indicating the air-borne origin of the moss-soil. Bar length 2 microns