The contracted vegetation (where plants are restricted to dry water courses) of the southern Negev was studied in the PhD thesis of J. Lipkin (1971). The gradual changes in the moisture regime along the wadi and its tributaries affect the processes of substratum weathering and the accumulation of various components forming the soil. During our vegetation investigations in Sinai (cf. Danin 1983: p.53-55) we delimited vegetation landscape units according to the appearance of their wadi systems in aerial photographs. In that book I included the gravel plains of the southern Negev in the same vegetational landscape unit (No. 9) of central Sinai. In her M.Sc. thesis Dvora Rudich (Rudich & Danin 1978) made use of Lipkin’s methods of investigation.
In our article (1978) we called “sequence of associations” the order of changes of associations along the wadi system.

In each such “sequence of associations,” the order of the associations’ replacement is fixed and differs from the “sequence of associations” developing on a different rock type. For example, the [Acacia pachyceras] and [Anabasis articulata] sequence of associations develops on gravel plains and chert hills of Mishash formation in western Biq’at ‘Uvda (west of highway 12). At the top of the wadi, in the section where it is hard to see any channels, annuals develop in rainy years; the most common one is [Aaronsohnia factorovskyi]. Below that section, when the wadi may be considered as of the first order, short-living perennials such as [Fagonia mollis] (Fig. 6.1.13) and [Blepharis attenuata] develop. In wadis of the 2nd order, the [Zilla spinosa] and [Pulicaria incisa] association prevails; in the 3rd order [Lycium shawii] and [Ochradenus baccatus] form shrubs 1-3 m tall (Figs. 6.1.14, 6.1.15); in the 4th and 5th order the wadis support living trees of [Acacia pachyceras] and [Acacia raddiana] (Fig. 6.1.16). The common companions of each association are the species that populate other associations growing above them in the drainage system. This associations sequence has not yet been described in scientific literature.
Wadis of a high order drain into Biq’at ‘Uvda and split into many small, shallow wadis (cf. [localvegf1 Figs. 6.1.2, 6.1.3]). Local changes in the wadi substratum or topography lead to changes in environmental conditions and hence to a high diversity of plant communities. An interesting example is seen in the south-western part of Biq’at ‘Uvda where Nahal Biqatayim and Nahal Milhan enter into the valley. When observing the area from north-west or from south-east, the area appears to be covered with diffused semi shrub vegetation. It is rather hard to cross this area due to the hundreds of small wadi channels that develop in this shallow or flat topography (Fig. 6.1.3). At the southern boundary of the airport the road crosses an area (Figs. 6.1.18, 6.1.19) where most [Anabasis articulata] and [Traganum nudatum] display the following typical soil structure (Figs. 6.1.20, 6.1.21): a basic stony pebbly layer (No. 1) covered by a loess layer (No. 2) and above this a soil mound trapped by the semi-shrub (No. 3 – Anabasis articulata or Traganum nudatum). The area structure shows evidence of the processes that took place in its development.

The spreading of the water in the water courses, as seen in the topographical map (Fig. 6.1.2), brought about the development of semi-shrubs with dominance of Anabasis articulata. These considerably decreased wind velocity in their close vicinity and assisted in trapping a thick layer of loessial soil. Each Anabasis shrub trapped dust in its crown and grew up above it forming a biogenic mound. At present, because of the death of shrubs and an increase in the erosion power of the water of occasional floods, the dissected landscape seen in Figs. 6.1.18-6.1.21 is formed. Dispersal of flood water over many channels leads to the penetration of a small quantity of water in each section of the drainage system, thus preventing the growth of trees and shrubs as described above for water courses of the 3rd to the 5th order. The shape of large wadis in the extreme desert is shown here in an aerial photograph taken in central Sinai (Fig. 6.1.21) and in the key for landscape units in Fig. 6.1.22. The origin of the latter two figures is in my book (1983): p. 54. 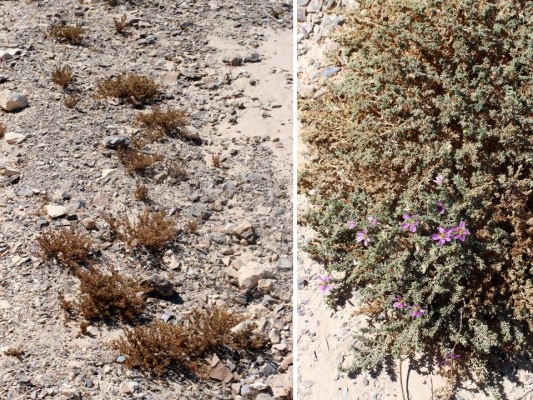 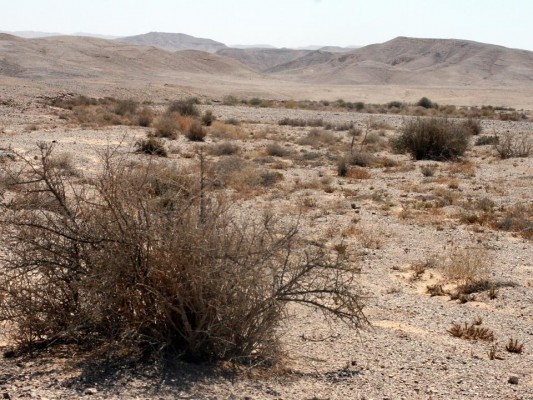 Fig.6.1.14: A Lycium shawii shrub accompanies dwarf shrubs which prevail in higher part of the wadi above the photography point 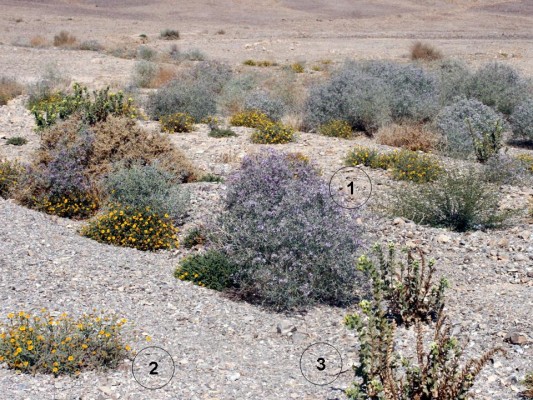 Fig.6.1.15: Zilla spinosa (1) and Pulicaria incisa (2) association accompanied by Hyoscyamus desertorum (3). Photographed in the rainless year 2011; deep-rooting dwarf shrubs make use of water accumulated due to the rains of 2010 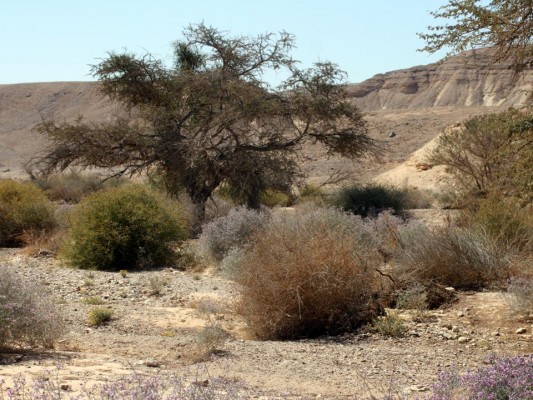 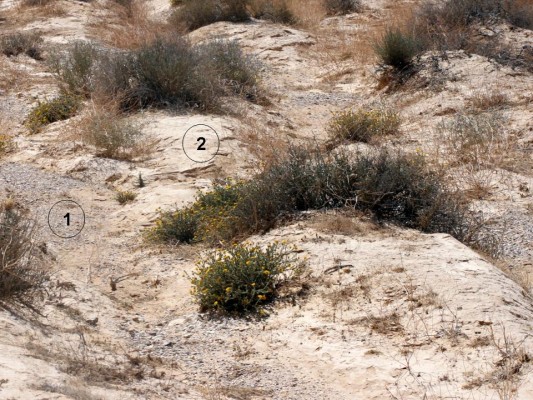 Fig.6.1.18: A landscape of small channels where the gravels layer (1) becomes prominent ; it is covered with fine-grained soil (2) 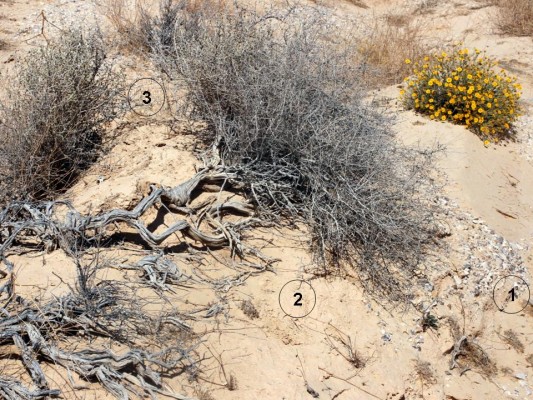 Fig.6.1.19: Dwarf shrubs of the Chenopodiaceae which grew on fine-grained soil (2) and gravels (1) and trapped soil under their canopy (3) 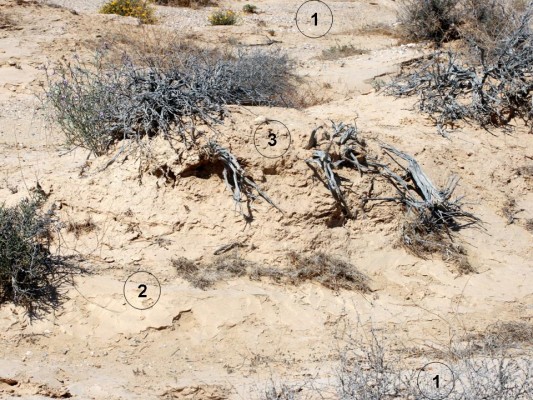 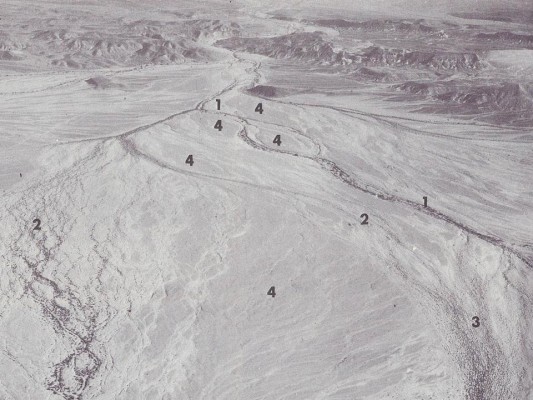 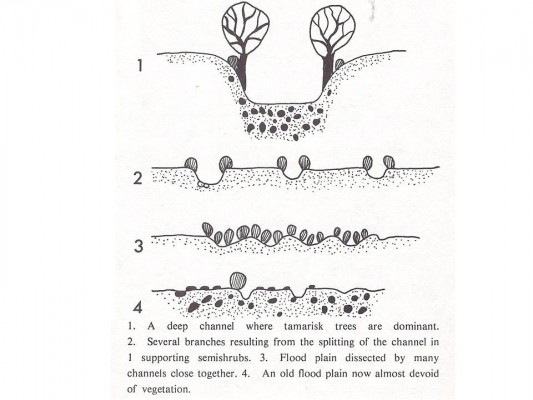