Today, sand reaches the beaches of Israel through the Mediterranean Sea, and has arrived in a similar way throughout previous geological eras. Let us start walking slowly down the long route of sand stabilization processes and its coverage by plants. We shall start from the last sand dunes that survived the urbanization of the coastal plain, and proceed to the Hamra and Kurkar rocks typifying the Sharon. We shall deal mainly with the area around Caesarea, where most landscape units represent some ten stages of sand stabilization induced by plants (plant succession). This area is part of a unique, rare type of vegetation and landscape on a Middle-Eastern- and a world scale and must be protected from the damage called “development.” Full scientific presentation of this unique ecosystem may be found in the four references mentioned in the bibliographic list. Full floristic lists are presented in these articles.

2. Sand origin and its movement

The main component of the sands of Israel is quartz (SiO2) transported by wind and water from the deserts south and west of our country through the Mediterranean. The main source of sand grains at present, and in the past, is the magmatic and metamorphic rocks such as those making up the dark mountains near Elat, southern Sinai (Figs. 4.1.1, 4.1.2), southern Jordan and Saudi Arabia. Slow cooling of the magma caused the formation of rocks with large crystals (Figs. 4.1.3, 4.1.4). The white crystals (No. 1 in the last figures) are of quartz. The reddish-pink ones (No. 2) are of orthoclase. 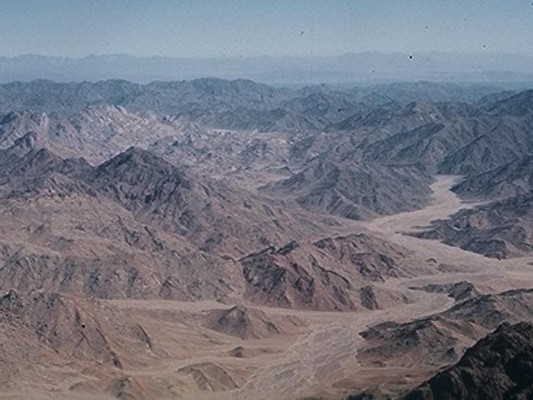 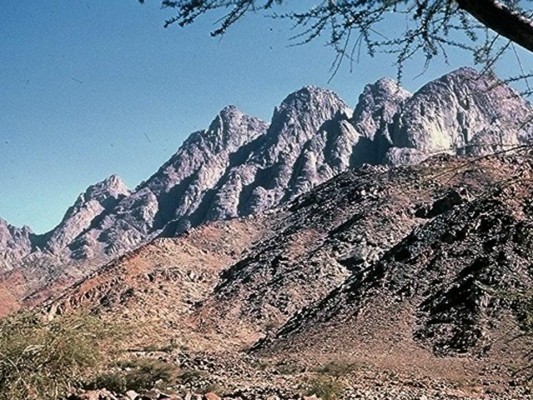 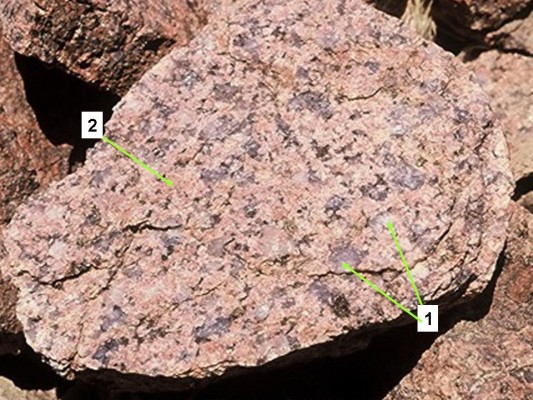 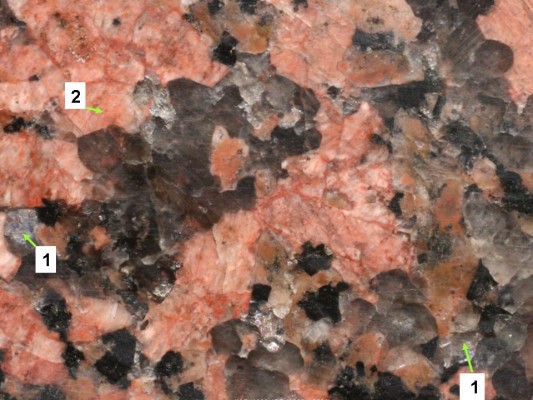 When the granite rocks are exposed to atmospheric conditions, [usefulplantsf10 microorganisms establish themselves in their crevices]. Their activity decreases the bond between crystals at the surface and the rest of the rock. Rain drops, hail-stones and strong wind displace the unstable crystals from the rock surface and when washed away by the rain water they arrive at the slopes below. Gravel derived from the breakdown of granite rocks is known as “arkose.” Floods drive the worn material along and in the erosion processes in the creeks; the erosion resistant quartz grains are left. The wind moves sand grains and sandstones are created in processes that have taken place in the deserts around us for many millions of years and still do today. In many places around the world one can see the sharp change that takes place, from a magmatic rock landscape(No.1 in figures 4.1.5, 4.1.6, 4.1.7) to a sandstone landscape (No. 2 in these figures). This plain, between two types of rocks, is referred to by geologists as peneplain. I particularly liked the explanation of one of my geologist friends that in Jordan this plain is tilted towards the east allowing water that soaked into the sandstones to drain out towards the exit of the plain down the mountain (Fig. 4.1.7), where springs flow. A certain historical aspect accompanies this spring, which the Bedouin call “Laurence’s spring.” When the movie about “Laurence of Arabia” was filmed, the landscape around the spring was used as a background for dramatic events from the past. Ancient sandstones (Figs. 4.1.6-4.1.10) wear out by different processes and the sand created builds up in wide valleys and becomes transportable by wind and floods. These bring the sand grains to the sea and at the opening of wadis and rivers (such as the Nile and Wadi el Arish) alluvial fans form. Currents that pass parallel to the coastline drive the sand northwards. I once managed to photograph a flood in Nahal Azza (Gaza creek) at the spot where the creek pours into the sea (Fig. 4.1.11). The creek drove mud as sediment and as the brown water met the sea the currents pushed them north, far from the opening of the creek. The line seen at the edge of the white area is of tamarisk trees planted by foresters to reduce damage by drifting sand. 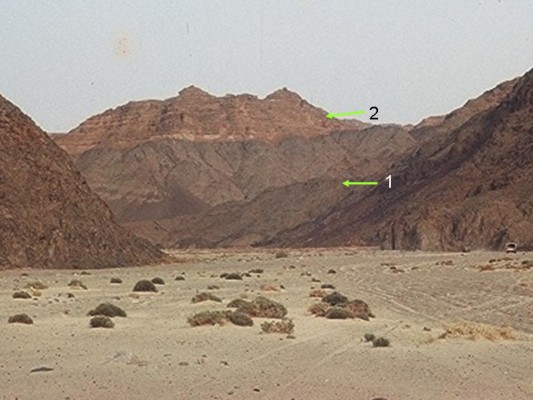 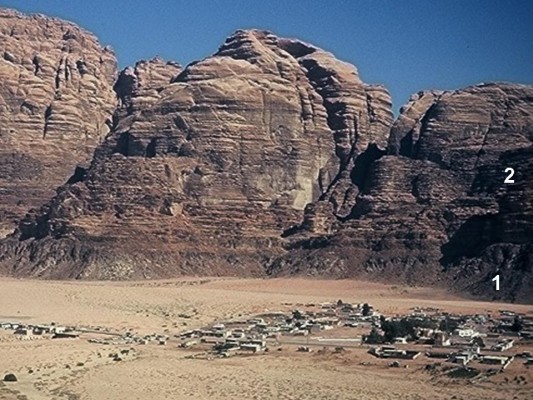 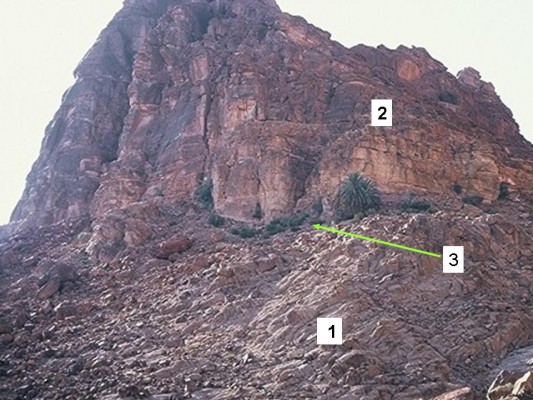 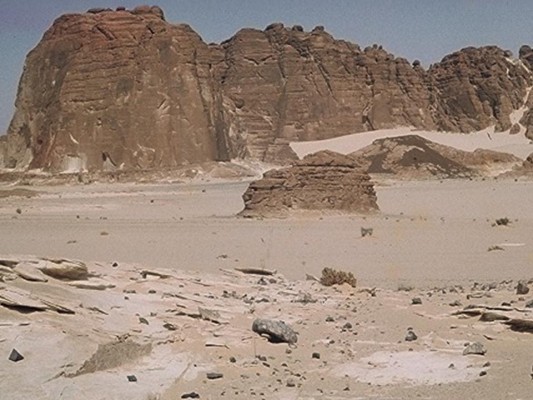 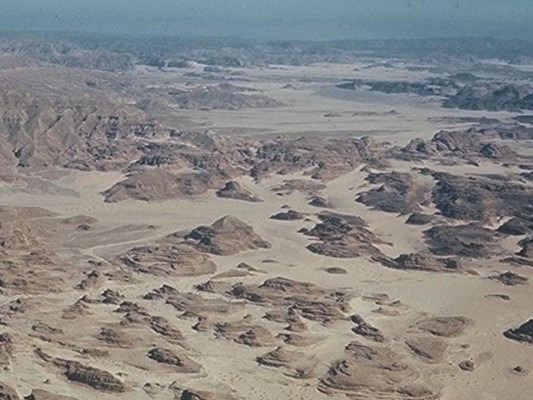 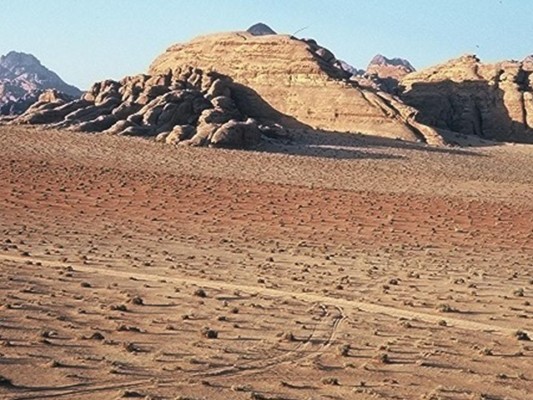 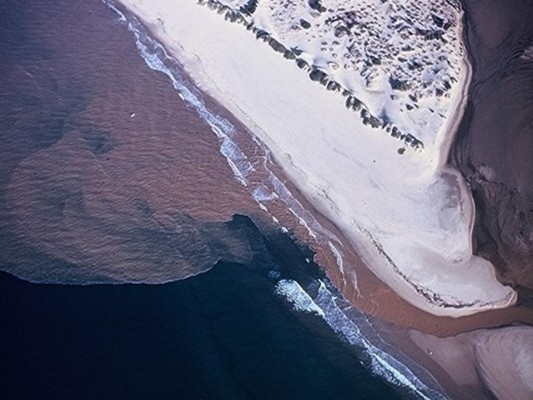 Fig.4.1.11: A flood at the outlet of Nahal Azza to the Mediterranean Sea. Mud carried by the flood water is transported northwards by currents in the sea.