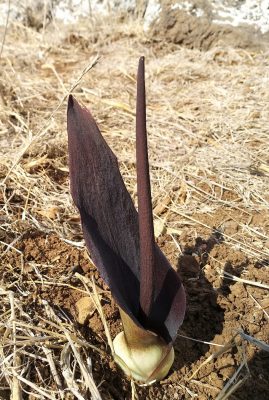 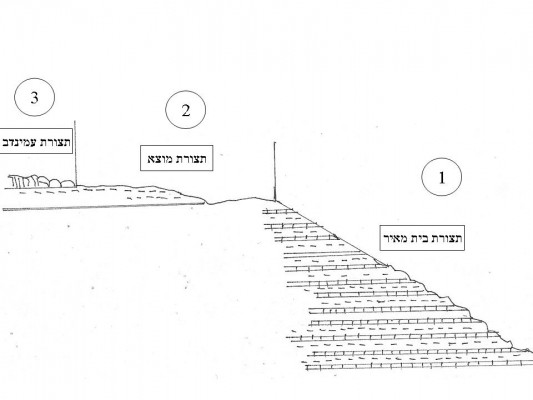 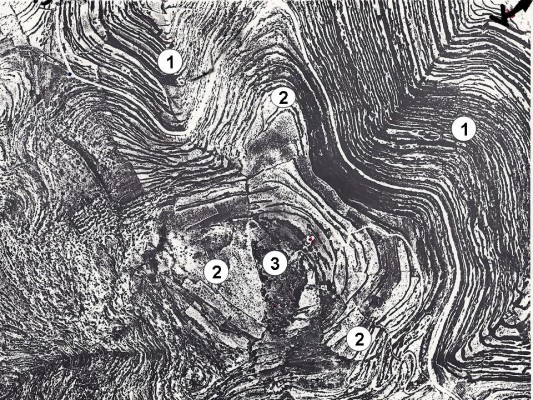 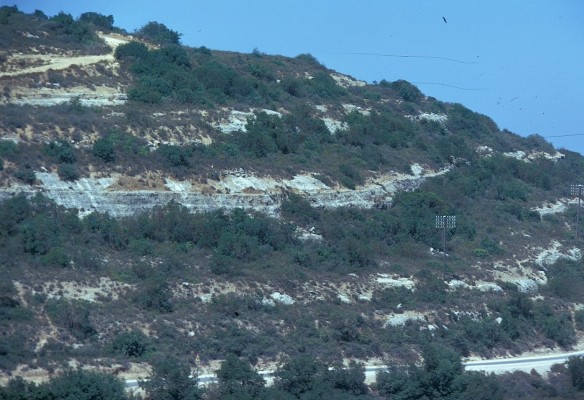 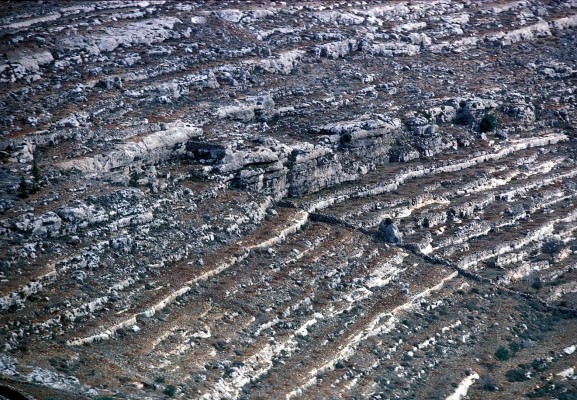 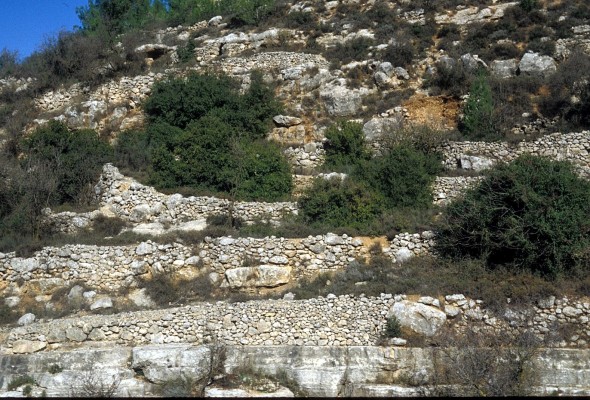 Motza Formation (unit 2) was named after the the marl quarries near Motza (5 km W of Jerusalem). This marl was used in the preparation of fire-resistant bricks at the “Red House Factory” of Motza. The landscape formed by Motza Formation on hilltops in the Judean Mts. is shown in Fig. 2.2.6, where two red arrows indicate the transition from Bet-Meir to Motza Formation. Human activity in this area, near Batir Village, continues in the same manner as the regular area management in the Judean Mts. belonging to the Palestinian authority. Large terraces constructed on these landscapes of Motza Formation may be seen clearly near the indication “2” in the aerial photograph (Fig. 2.2.2). A dense batha (= dwarf shrub formation) of [Cistus], [Fumana], [Satureja] and [Thymbra] already existed there in 1952, the year this photograph was taken (Fig. 2.2.7). In addition to special soil properties, Motza Formation is characterized by having a microbiotic crust of cyanobacteria, algae, lichens and mosses (Fig. 2.2.8). 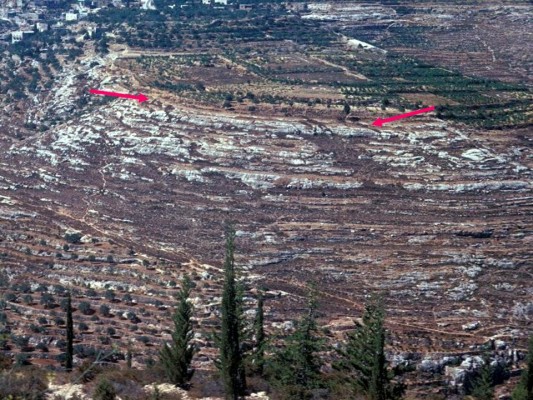 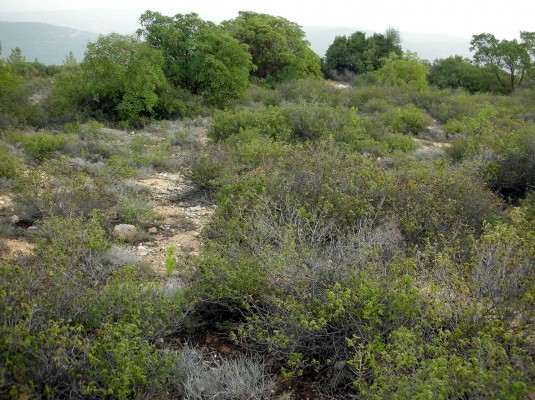 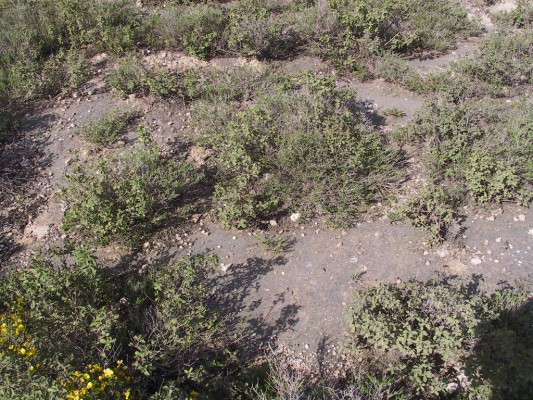 Aminadav Formation (unit 3) is recognized in the aerial photograph (Fig. 2.2.2) as a dark triangle surrounded by typical areas of Motza Formation (unit 2). Hard rock outcrops protrude in a ground view of Aminadav Formation (Fig. 2.2.9). The rocky nature of this formation is expressed in the paucity of agricultural land and in the success of the oak-pistachio maquis covering the rocky terrain. The soil developing here is Terra Rossa, leached and poor in nutrients. The transition from the young unit 3 to the older unit 2 takes place along a topographic descent from unit 3 (in Fig. 2.2.2) northwards, through the Air Force monument to the Motza Formation terraces. However, the transition southwards from unit 3 to unit 2 takes place at the same altitude (Fig. 2.2.10). Amongst the broken arrows in Fig. 2.2.2, there is a geological fault, where the block south of it (unit 2) was raised, in relation to the unit 3 outcrop. Later the area became one hill “carved” by erosive forces. The transition between the geological formations is evident in the replacement of light and dull vegetation by tall, green arboreal vegetation (cf. 2 & 3 labels on Fig. 2.2.10). These areas differ in soil type, which is Light Rendzina in one, and Terra Rossa in the other. 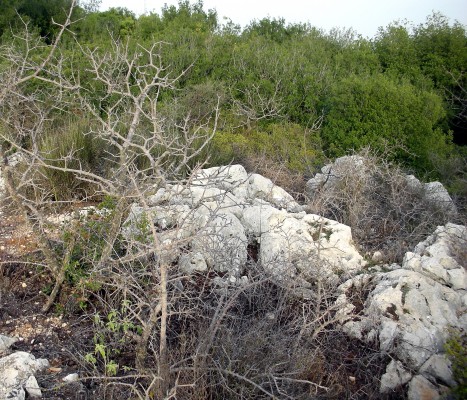 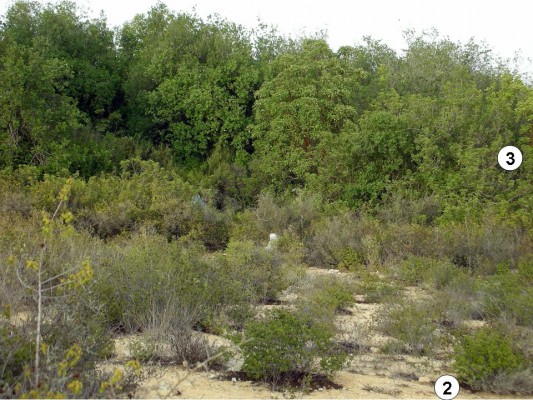 2.2. Batha of [Sarcopoterium spinosum] and Maquis of [Quercus calliprinos]

The interesting issues in the chapter on vegetation are the characterization of plant communities, and processes of associative replacement on various rock types as time passes. In many components the vegetation of unit 3 resembles that of the rocky terrain of Ramat Bet Hakerem. [localvegb4 Plant succession was described there in detail]. Some 20-30 years ago it was possible to see batha patches of [Sarcopoterium spinosum] on the Terra Rossa of unit 3 (Fig. 2.2.11). Exposed areas in that batha were rich in herbaceous species including several species of clovers. Carpets of [Linum pubescens] (Fig. 2.2.12) and other species could be seen there. Experimental study has shown that annuals growing on Terra Rossa suppress the seedlings of [“Sarcopoterium spinosum” S. spinosum] by drying up the soils in their sites. Peripheral growth of [“Sarcopoterium spinosum” S. spinosum] shrubs in margins of formerly ploughed terraces leads to rejection of the annuals (Fig. 2.2.13) and enables the establishment of new [“Sarcopoterium spinosum” S. spinosum] seedlings. One of the rare plants which grew in the rock crevices of Aminadav formation was [Sternbergia colchiciflora]. Following the expansion and growth of the oak and pistachio ([Quercus calliprinos] and [Pistacia palaestina]) maquis, accompanied by the Syrian pear ([Pyrus syriaca] – Fig. 2.2.9), the small companion plants disappeared. The aerial photograph of 1952 (Fig. 2.2.2) shows clearly that maquis trees survived in the rocky area from the period when it was farmed by Arabs (before 1948). Following the cessation of cutting and grazing, trees gradually grew up in the areas shaded by maquis. New young oak trees established themselves in the shade of [“Quercus calliprinos” Q. calliprinos] trees. By their shade, they displaced the annuals and the semi shrubs. An increasing quantity of humus accumulates in the shade of [Cistus] shrubs and may protect the oak acorns from direct desiccation and they germinate in winter. When growing up, these oaks rejected the shrubs in the shade of which they germinated and became established. Open spaces in the maquis of the reserve during the first few dozen years became impenetrable due to the dense growth of vines such as the thorny [Smilax aspera] (Fig. 2.2.14). 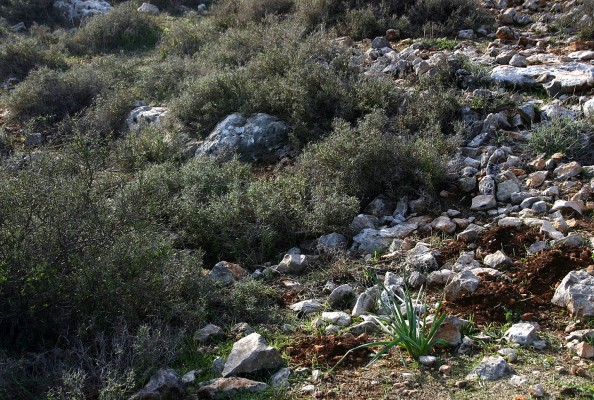 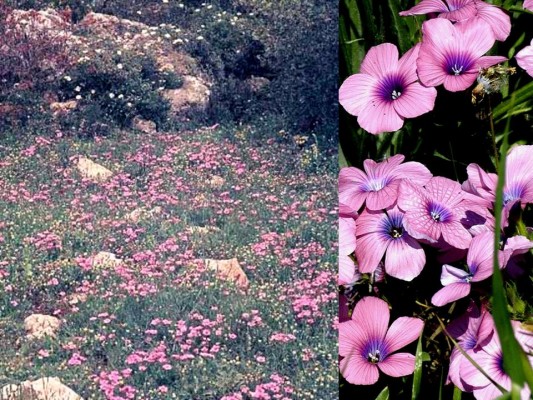 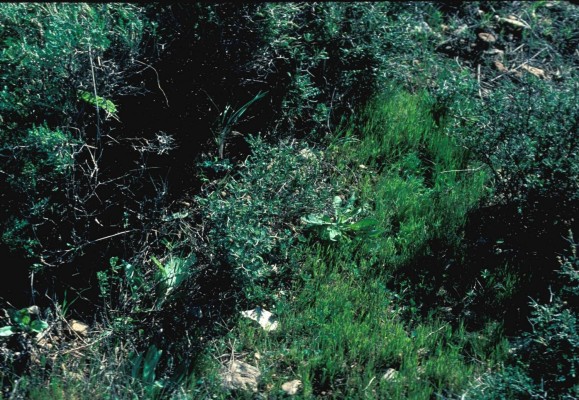 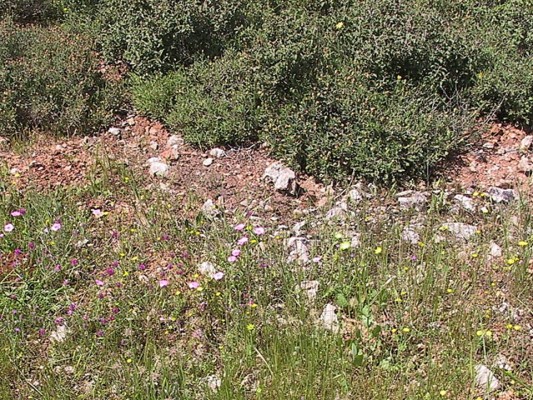 Fig. 2.2.14: Batha of Sarciopoterium spinosum suppress the growth of annuals at the shrubs’ margins and enable lateral expansion of S. spinosum until full rejection of the annuals. 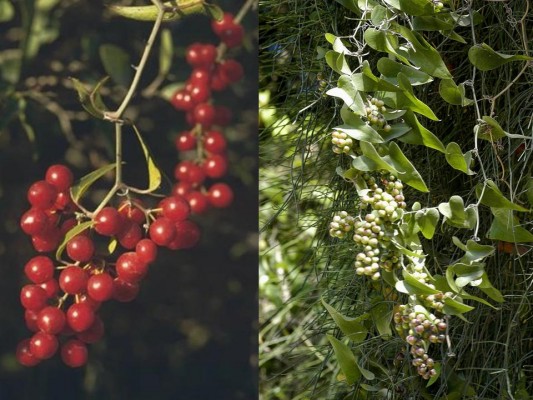 Fig. 2.2.15: Smilax aspera, one of the vines developing in the maquis’ shade, blocking the paths under the woodland.