In dealing with the maquis vines I wish to emphasize the vegetation of the past. These plants are not restricted to woodlands and may live in open habitats as well. All the vines found in the rock reserve have small red or black fruits, consumed by song-birds. The hard-coated seeds present in the juicy fruit are not digested and are excreted a short while after being eaten. The passage of seeds through the bird’s intestinal tract makes the seed coat thinner and improves germination abilities. Thus when birds land at the top of trees such as [Styrax] or [Crataegus], they excrete seeds onto the area shaded by the tree. Germination in such a site directs the offspring to the appropriate habitat (Figs. [localvegb2 2.1.16], 2.1.22). The syndrome (=the common functional properties) of the maquis vines includes a small, dark-colored, juicy fruit, containing hard-coated seeds, and fast growth in shaded places. The adult plant has “climbing devices” which assist their growth towards the woodland canopy. These “devices”: the hard teeth at the leaf margin and on the stem ([Rubia tenuifolia]), hooked thorns ([Smilax aspera]), tendrils ([Smilax] and [Bryonia] species); and long stems that grow around the supporter branches, are common to all of them. Ripe fruits of the vines have the following colors: [Smilax aspera] – red; [Rubia tenuifolia] and [Asparagus aphyllus] – black or dark purple; [Tamus orientalis] – red, and [Bryonia syriaca] – red. Black seeds of [Ephedra foeminea] are subtended by cones with red-juicy scales. Although regarded as a cone in the botanical literature, birds may see it as a regular red-fruited plant (Fig. 2.1.22). At the end of summer the plant develops flowers arranged in cones (Fig. 2.1.23 left); the female ones have one – or two ovules. There is a drop of sugary fluid at the top aperture of the ovule; the fluid functions as a trap to receive the pollen grains that arrive on the wind. The pollen grains germinate and fertilization takes place. During ripening, the cone scales become juicy causing the small cones to look and function like a fruit (Fig. 2.1.23 right). All the vine species mentioned here occur in the rock reserve and their relation to the trees is obvious (Fig. 52.1.24). 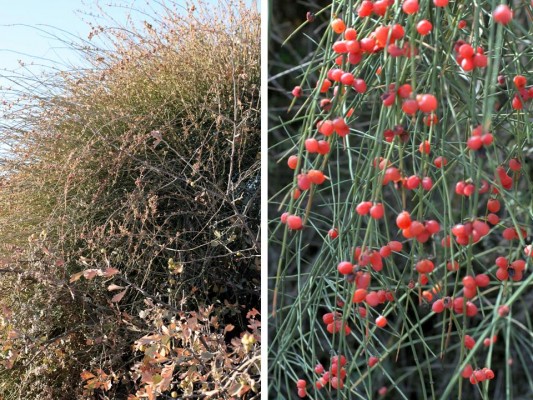 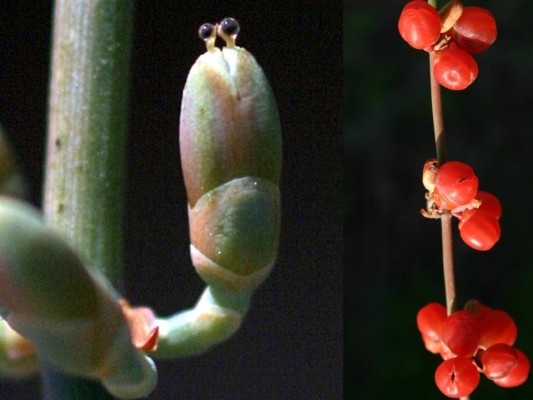 Fig. 2.1.23: A female cone (left) with two ovules ready to receive pollen grains; cone scales are thin and green. After pollination scales become fleshy and the cone functions as a juicy fruit. 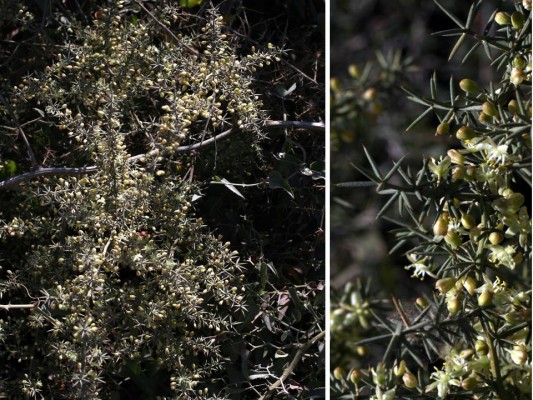 Fig. 2.1.24: Asparagus aphyllus, one of the common vines growing below the trees in the reserve.

[Osyris alba] is a kind of “hitch-hiker” in the complicated system of maquis plants and their companions (Fig. 2.1.25). Its red fruits are juicy, it has hard-coated seeds and it is dispersed like the maquis vines. After germination its roots become attached to the host roots with button-like organs. It inserts its tissues into the host roots and sucks water and minerals. [“Osyris alba” O. alba] has green stems and leaves and produces its own organic materials and is therefore regarded as a half-parasite. When growing on tall trees, such as cypress trees in Bet HaKerem, it may reach a height of 5-10 m. 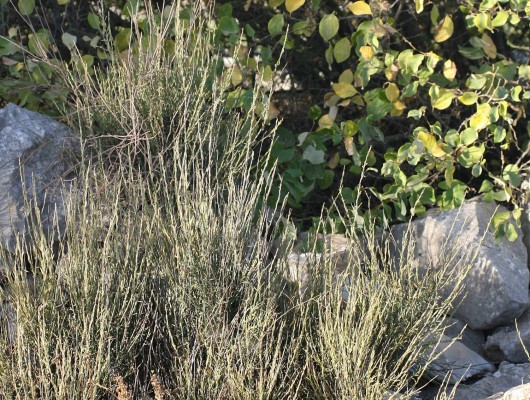 Fig. 2.1.25: Osyris alba is a semi-parasite growing on Styrax roots in the eastern part of the reserve. 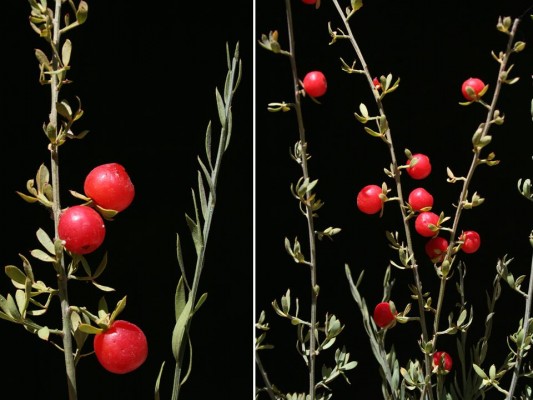 Fig. 2.1.26: Birds see Osyris alba as a vine with its red small fruits. Its seeds are transported to the tree’s shade with the help of the birds. Germinating near the tree, the Osyris roots become attached to the host’s roots and obtain water and minerals from them. This semi-parasite produces organic compounds in its green leaves and stems.

These plants are active in the season most appropriate for growth (winter and spring) and enter into dormancy with their seeds in the dry season when it is difficult to survive. If we evaluate the success of one life form or another by the number of their species in the total list of the country, then being an annual is the most successful. In their article, Danin & Orshan (1990), provide the proportions of growth forms in Israel and in its geographical districts. There are 2622 species in Israel and 47% of them are annuals. Of the 1200 species recorded in the Judean Mountains, 57% are annuals. The full list of plants in the reserve will be recorded in the spring and summer of 2010. However, in summer, by observing remnants of 2009 growth, it is possible to see that they represent the plethora of microhabitats of which the reserve is composed.

1.9. Progenitors of the Cereals

In sites where rock boulders are close to each other with deep soil pockets, 20-100 cm wide, between them, there are grasses with large seeds such as [Triticum dicoccoides], [Hordeum spontaneum], and [Avena sterilis] (figs. 2.1.27, 2.1.28). Herbaceous vegetation with dominance of these species has developed over large areas in the Golan and Upper Galilee, in soils rich in phosphorus. The reasons for the success of the grasses with large seeds in the “rock reserve” are not clear. However, anyone wishing to investigate this may be encouraged by the fact that this phenomenon typified the entire rocky landscape of Ramat Bet HaKerem before the urbanization. Large individuals have developed near the rock outcrops (Figs. 2.1.27, 2.1.28), while smaller individuals develop far from the rock-soil contact zone, i.e. towards the center of the soil pocket. The delicate plant-soil equilibrium obliges us to be careful about trampling too much in this area. The herbaceous plants are in continuous competition with [Sarcopoterium spinosum]. An intermediate situation in this competition is displayed in [localvegb4 Fig. 2.1.44]. Annuals grow on the left side of the soil pocket and [“Sarcopoterium spinosum” S. spinosum] on the right. During the following years, when the [“Sarcopoterium spinosum” S. spinosum] branches elongate, they will over-shadow the annuals and will cause their gradual rejection. In case of fire, the annuals, which insert their diaspores into the soil (Figs. 2.1.28, 2.1.29), will survive. The diaspore contains one grain (in [Hordeum spontaneum]) or two to three grains (in [Triticum dicoccoides] – Fig. 2.1.29/1 and [Avena sterilis] – Fig. 2.1.30). It falls on the ground and the minute teeth (Fig. 2.1.29 right) and hairs direct it into the soil. 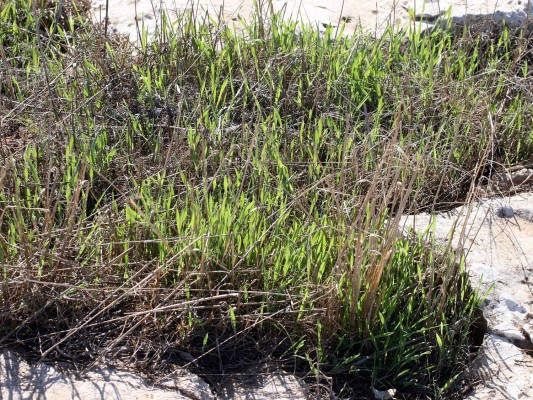 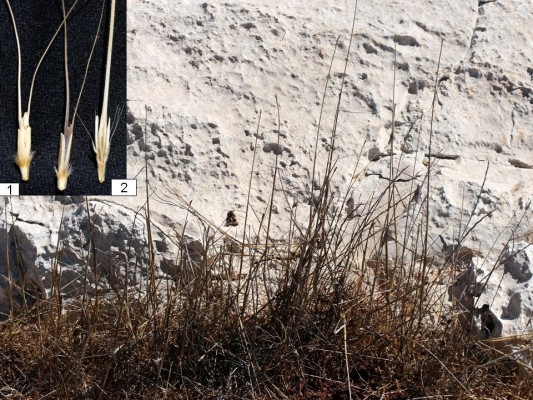 Fig. 2.1.28: A soil pocket with annual grasses. The diaspores at the upper left square were collected from the straw by feeling the stiff dentate awns at their tips. A diaspore with one awn = barley, two awns = wheat.

Because of the contact between the stiff, finely toothed awn with the dry plant remains, the horizontal movement of the plant remains become “translated” into vertical movement of the diaspores by means of the teeth. The up-turned hairs at the tip of the arrow-head tip direct the diaspores into the crevices in the soil and prevent their movement out of the soil. In this way the diaspores (1 & 2 in Fig. 2.1.29) penetrate into the soil and there, they protect the grain or grains contained in it from wild fire, germination after a light rain, and harvesting ants. However, [“Sarcopoterium spinosum” S. spinosum] is burnt by fires and until it recovers, the area formerly covered by the plant is available for the establishment of annual shrubs without shading. In this manner, a delicate equilibrium takes place in this area and we are invited to watch it, but should refrain from becoming involved in it. 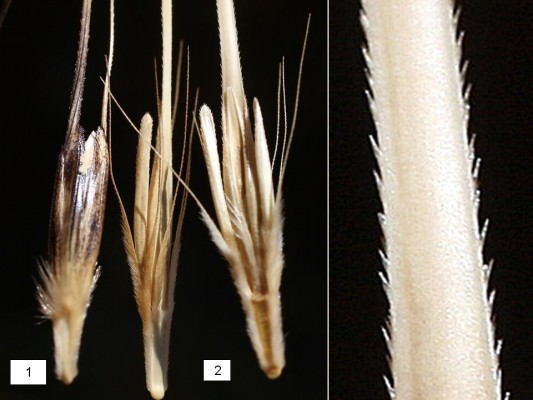 Fig. 2.1.29: A diaspore of Triticum dicoccoides (1) is an entire spikelet containing 2-3 grains and two awns. The diaspore of Hordeum spontaneum has a single grain and one long awn. The awn is dentate at the tip, and the teeth assist the penetration of the diaspore into the soil. 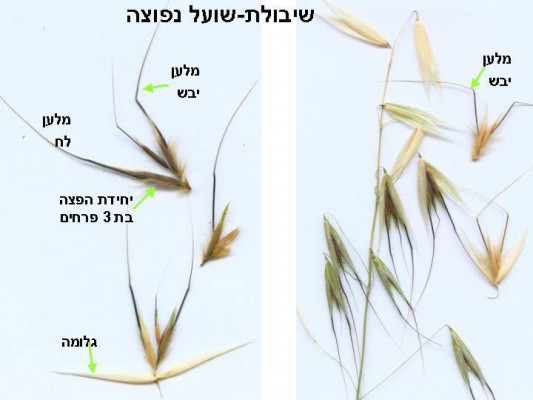 Fig. 2.1.30: A panicle of Avena sterilis and its components. Moist awns are straight, dry ones are bent at the center. Twisting and un-twisting of the awn during changes in its water-content aids the diaspore in penetrating into the soil.

The list of annuals in the rock reserve is much larger than can be presented here. Many species are associated in one way or another with the low soil fertility resulting from effective leaching of the soil. [Brachypodium distachyum], [Filago contracta], [Filago palaestina], and [Plantago cretica] were commonly found at the center of soil pockets. At present, they are occasionally found in this microhabitat as well.