3.2. The Flint Layer of Mishash Formation

The water regime in the soil pockets of this layer is considerably influenced by the weathering pattern of flint layers. The ratio of “contributing area” to that of the “receiving area” varies from place to place. The [Chiliadenus iphionoides] – [http://flora.huji.ac.il/browse.asp?action=specie&specie=ORIDAY Origanum dayi] association is found in sites where the layer is exposed, not covered with soil, and has a few fissures filled with soil. There are several plants that grow in this area of the Negev, mainly in wadis. [Thymelaea hirsuta] and [Retama raetam] are good examples of this, indicating a good moisture regime in this microhabitat. Geophytes of the Mediterranean territory of Israel occur in the rock fissures as well, such as [Umbilicus intermedius], [Urginea maritima], and [Asphodelus ramosus].

Several dwarf shrubs that are confined to Mediterranean bathas are found here as well; the most prominent are [Teucrium capitatum] and [Fumana thymifolia]. The most surprising plant in this habitat is the fern [Cosentinia vellea] (Fig. 2.3.12) which grows near the place where the irrigation channel crosses the flint layer, supported by a stone wall. The [Cosentinia] is accompanied in the fissure by [Umbilicus intermedius]. There are places where the hard rock faces south – or south-eastwards and supports thermophilous plants which are known from warmer parts of the Negev. Such are [Salvia aegyptiaca], [Lycium shawii] and even [Tricholaena teneriffae] (Fig. 2.3.13). Their growth in the Rakhama ridge seems to be made possible by the efficient absorption of heat radiation by the dark flint rocks. 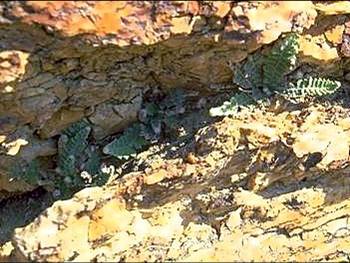 Fig. 2.3.12: Cosentinia vellea in a fissure of a flint rock outcrop in the foothills of Rakhama Ridge. 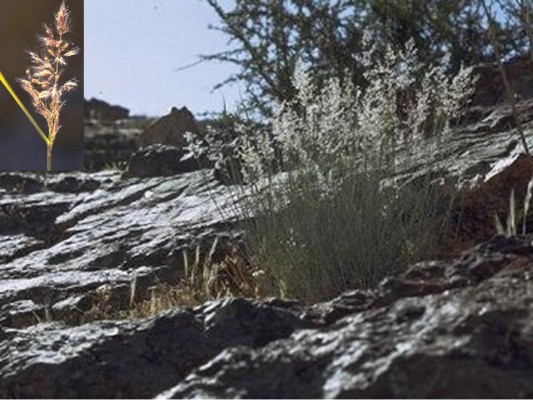 Fig. 2.3.13: A black outcrop of flint rock in a south-facing slope with a Tricholaena teneriffae tuft in a fissure. This site is warmer, enabling the growth of this thermophilous plant. 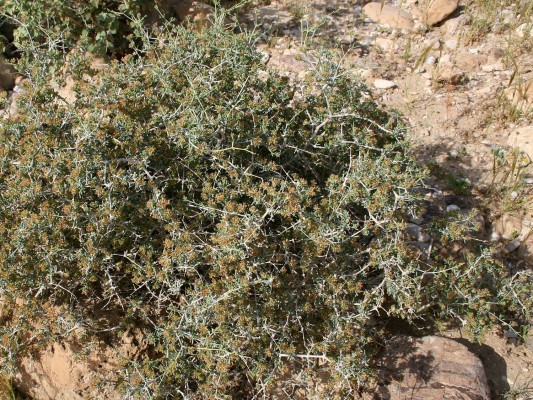 3.3. The Chalk Layer of Menuha formation 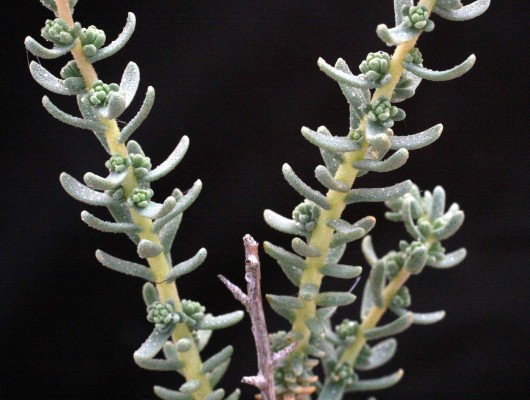 Fig. 2.3.15: Reaumuria hirtella is the dominant plant in the Menukha Formation outcrops. Salt grains seen on the leaves result from crystallization of salty solutions excreted from gland on the surface of the flat leaves.

Chalk is a soft rock with a high water-holding capacity. Where the rock is exposed, rain water is efficiently absorbed into the upper rock layers, ready for direct evaporation. The result is that this substratum is dry and saline when compared to other substratum types. The source of salinity here is the rain water containing 8 parts per million (=8 mg salts per liter) of Mediterranean Sea origin; it is the same process described above for the Loessial Serozem. In sites where the rock is exposed, [Reaumuria hirtella] (Fig. 2.3.15) is dominant. In sites where the weathered chalk is covered with stony-loessial soil an association dominated by [Artemisia sieberi] develops on north-facing slopes and [Zygophyllum dumosum] on south-facing slopes.

Netser formation may be characterized by alternate layers of hard limestone and thin layers of marl or soft calcareous rock. Like other layers on this side of the ridge, this formation is inclined and its weathering leads to the formation of small limestone outcrops. The latter contribute high quantities of run-off water to the fissures and soft layers among them.
The vegetation typical of Netser Formation is [“Artemisia sieberi” A. sieberi] – [“Gymnocarpos decander” G. decander] association. [Thymelaea hirsuta] is one of the prominent plants growing in this association near wadis. The landscape where [“Thymelaea hirsuta” T. hirsuta] prevails on limestone near wadis is seen in the area between Beer Sheva and Lahav, where mean annual rainfall is 200-300 mm. The annual average for Rakhama ridge is only 100 mm; [“Thymelaea hirsuta” T. hirsuta] may be an indicator for local duplication of the amount of available water. The size of solid rock outcrops influences the ratio of contributing area to receiving area. The large patches may support components of the [Chiliadenus iphionoides] – [http://flora.huji.ac.il/browse.asp?action=specie&specie=ORIDAY Origanum dayi] association which are a common occurrence in the neighboring rocks of Shivta Formation. The rocks of Drorim Formation have a similar appearance in the field and support similar vegetation.

Crystalline calcium carbonate without intercalation of soft rocks is the cause of the landscape unit richest in plant species and weathering patterns. A whole chapter was dedicated to the features of this layer and to the “islands” supporting mesophytes formed in deserts.The rocks of the north-facing slopes are covered by a crust of light-colored epilithic lichens, which protect them from deep penetrating weathering. Shrubs of the Mediterranean species [Sarcopoterium spinosum] occur in the smooth rocks of Rakhama Ridge. This is the common dominant of the semi-shrub formations of the Mediterranean territory. Its seed are dispersed by floating on stream water. There is no water course draining the nearest Mediterranean hills such as the Judean Mts. to reach the Rakhama Ridge. [Ajuga chamaepitys], [Phagnalon rupestre] and [Teucrium capitatum] are small dwarf shrubs that occur often in Mediterranean bathas and grow in the soil pockets of Rakhama Ridge. [Phlomis brachyodon] is an endemic plant of the semi-steppe bathas which grow in a patch of a few specimens in a wadi that drains outcrops of Shivta Formation (Fig. 2.3.16). The typical shrub of the semi-steppe bathas, [Ballota undulata] (Fig. 2.3.17) and many other species testify to the past penetration of the semi-steppe bathas into the desert; when the climate became drier the relicts of that period remained in Shivta Formation terrain. In addition to the rare geophytes [Sternbergia clusiana] and [Astomaea seselifolium] growing in Rakhama Ridge there are even more rare geophytes. I shall always remember finding the orchid [Ophrys umbilicata] (Fig. 2.3.18) on a south-east facing slope hiding among [Asphodelus ramosus] plants. 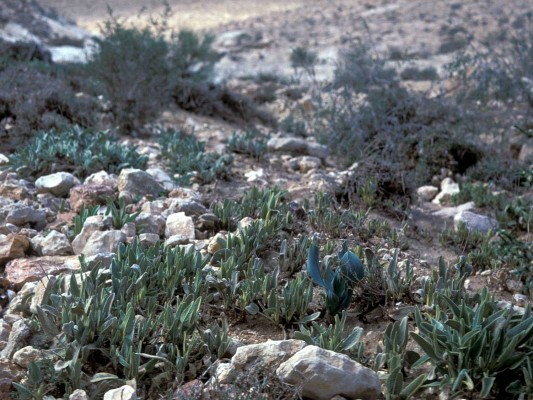 Fig. 2.3.16: Phlomis brachyodon forming a small population in a wadi draining outcrops of Shivta Formation. This is the only population of this species known in the Negev Highlands. 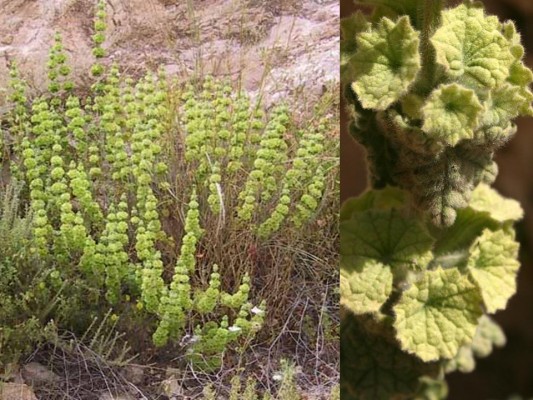 Fig. 2.3.17: Ballota undulate is the plant after which the class of semi-steppe bathas of Israel are named (Ballotetea undulatae); it is rather common on the outcrops of Shivta Formation discussed here.

The seeds of our orchids are minute and known as “dust seeds” and I assume that I met a rare result of seed germination and establishment in a fissure containing soil. Considering the fact that orchids are assisted by a symbiosis with soil fungi, the incidence of finding the [Ophrys] (Fig. 2.3.18) becomes even more unique. A few specimens of the fern [Asplenium ceterach] occur in well-shaded soil pockets. Vertical cliffs occur in a few outcrops of the Shivta Formation in the ridge, and support [Podonosma orientalis] and [Hyoscyamus aureus] which grow in the Western Wall in Jerusalem as well. 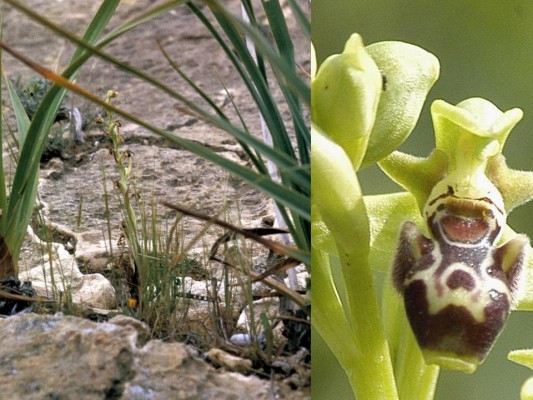 Fig. 2.3.18: A single plant of Ophrys umbelicata found in the Negev Highland; the close-up was photographed in the Judean Mts. 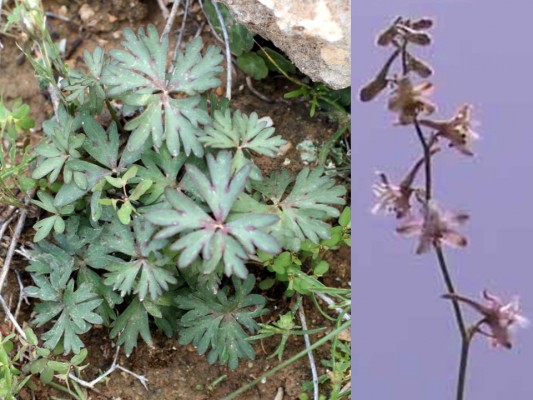 Fig. 2.3.19: Delphinium ithaburense, a Mediterranean geophyte growing also in soil pockets in large limestone outcrops and considered as a relict from a period of moister climate.

When at high school I was impressed by my first meeting with [Delphinium ithaburense] in the shade of terraces near En Kerem, and here I was fortunate to find it again as a relict in the Rakhama Ridge (Fig. 2.3.19). It is no less surprising than its companion [Geranium tuberosum] (Fig. 2.3.20), which has “heart shaped” petals and leaves that resemble minute palm trees. An additional surprise is the occurrence in the desert of a minute plant [Asterolinon linum-stellatum], [Primulaceae] (Fig. 2.3.21). The diameter of its corolla when opened is 1-2 mm and this may be the smallest corolla in the flora of Israel. It is accompanied in a few soil pockets by [Campanula erinus] (Fig. 2.3.22) which accompanies it in the Mediterranean bathas as well. 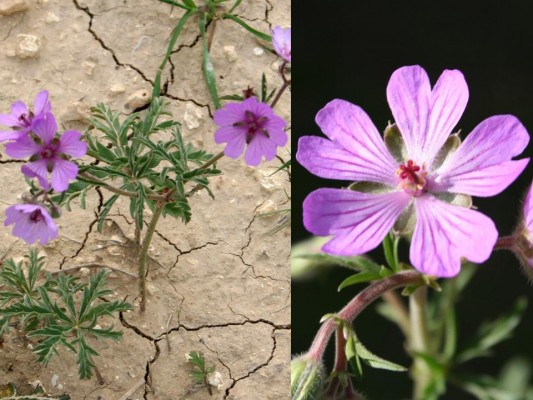 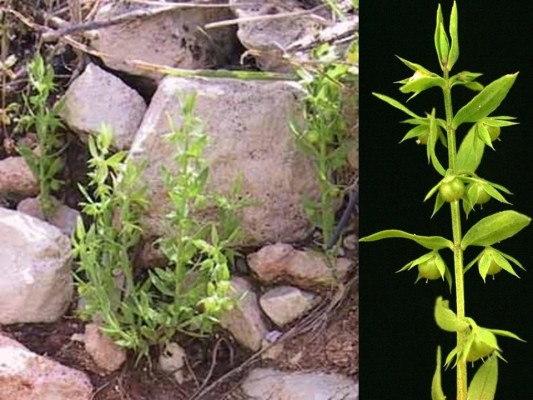 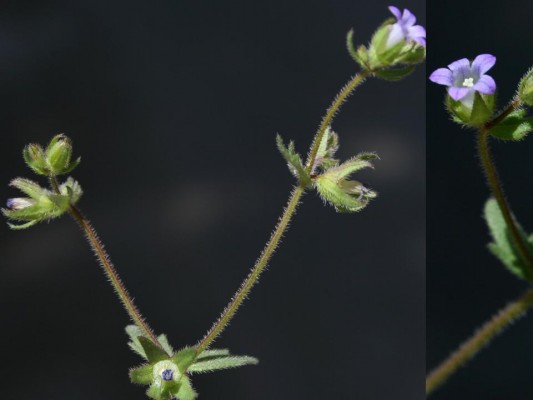 Fig. 2.3.22: Campanula erinus accompanies A. linum-stellatum and they often share the site where they grow. 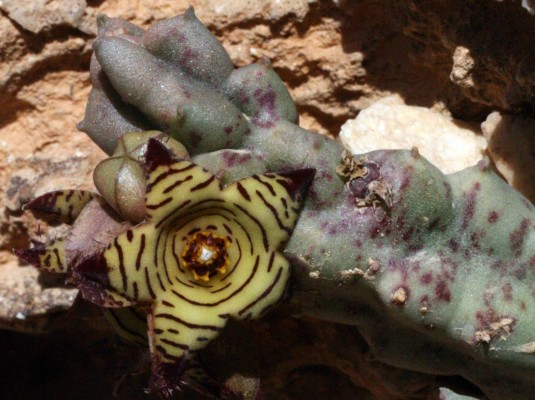 Fig. 2.3.23: Caralluma europaea is a rare rock plant growing in the whole mountainous part of the country, but confined to south-facing rock outcrops. Rudimentary leaves are seen on the succulent stems.

A rare plant that grows on south-facing outcrops of the Shivta Formation resembles a “cactus.” It is [Caralluma europaea], [Asclepiadaceae] (Fig. 2.3.23). The origin of most “cactoid” plants (that resemble Cactaceae) in the [Asclepiadaceae] is South Africa. I was amused to note that these plants were always “facing homeward” (South Africa). Climbing to higher slopes, we arrive at older layers of the Drorim Formation. Here, as in the Netser Formation [Artemisia sieberi] and [Gymnocarpos decander] are dominant. Further up one arrives at the Tamar Formation of the Cenomanian where most phenomena described for the Shivta Formation occur as well. There are patches of high concentrations of [Sternbergia clusiana] plants.

Anton Kerner (1863) wrote in a book on the ecology of a river in Eastern Europe that only after checking up on the vegetation in detail and over a considerable period, may the secret be found enabling one to discover the unity in the natural vegetation in the area. Only after some time, the green enigmas, which looked at first like a mixture of unrelated things, now reach harmonic completeness. To my professors, the Rakhama Ridge and the Negev Highlands as a whole, looked like a brown-green enigma. There was no order in the distribution of plant communities. Their attempts to explain to us, the university students, that plant communities are influenced mainly by the slope orientation, solved only part of the enigma.

When I started out, in my childhood, observing natural environments, I loved searching for plants and fossils in the areas close to my home. Most of those areas are now covered by houses and asphalt roads. At university I used the opportunity to study Botany and Geology as basic studies. When I left the university, to enter the “big wide world” I met the challenge of the “green enigmas” mentioned by Anton Kerner. In the 1960s, the Rakhama Ridge was one of the first “hard nuts” that we cracked, using botany and geology. After this obstacle most of the other Negev Highland areas could be interpreted with their green enigmas solved. For 40 years I took my students on botanical-ecological visits to the Rakhama ridge and each such excursion resulted in the discovery of new phenomena. Dozens of plants there are my personal friends and I pay them visits whenever I can.

When we look at the impact of environmental factors on the distribution of plant communities, we find that the slope aspect (mainly north- versus south-facing slopes) is not an important common factor. Its influence is seen only in one type of substratum – the weathered Menuha Formation chalk with soil above it. The moisture and salinity regime in the two slopes is rather similar, but the southern aspect leads to higher desiccation and the dominant plant is [Zygophyllum dumosum]. This plant dominates over considerable areas drier than the Rakhama Ridge. Solar radiation is less efficient on the north-facing slopes and the dominant plant is [Artemisia sieberi] which prevails on large areas north of the Rakhama Ridge.

Two soil types become saline in the natural process of maturing and are dominated by one halophyte. These are the Loessial Serozem dominated by [Haloxylon scoparium] or [Anabasis syriaca]. Weathered soft chalk is dominated by [Reaumuria hirtella] and when the chalk is exposed the slope aspect has no influence.

Smooth-faced outcrops of limestone or unbroken outcrops of flint contribute high quantities of run-off water to the small volume receiving it. This leads to a moisture regime which is not influenced by the north or south aspect. The dominating vegetation is the [Chiliadenus iphionoides] – [http://flora.huji.ac.il/browse.asp?action=specie&specie=ORIDAY Origanum dayi] association. A local influence of the slope direction is expressed in the nature of the microbiotic community (lichens, cyanobacteria and fungi). This influences weathering and the resulting properties of the rock surface.