A pair of typical thorns of the Acacia species growing spontaneously in Israel is shiny-white and they project at the base of the compound leaf. The right leaf in Fig. 16.1.18 has a pair of straight stipular thorns; the left leaf has a pair of short, hooked stipular thorns. An adult stipular thorn of [Acacia pachyceras] (Fig. 16.1.19, right pair) is smooth, with no projections or depressions and its tip is red-brown. When the white outer tissue is removed with a knife (the most right thorn in Fig. 16.1.19), the hard, brown part is revealed. It is brown all the way from bottom to top. The pair of Acacia thorns is derived from stipules. This is also the case in the other Acacia species derived from Africa, Asia, and America. The largest number of Acacia species (1200 out of 1500 species on earth) occurs in Australia and there may be other types of thorns.

Photographs of Holy Thorns displayed in NE Italy resemble the morphology of straight stipular thorns of Acacia species. While preparing for a comprehensive study of the thorns in Italy, I contacted Prof. Giulio Fanti, from the Department of Mechanical Engineering, the University of Padua. Today, he is known as one of the leading Sindonologists. Prof. Fanti sent me photographs of two Holy Thorns (16.1.19, 16.1.20), clearly of an Acacia tree. I was ready to say that I cannot identify the species, since thorns that resemble those of Acacia raddiana and Acacia pachyceras are common in the Acacia species of Africa, Asia, and America.

While checking the thorn from Losiana, Italy (Fig. 16.1.20), one can see a round swelling or expansion at the thorn’s base. I “asked” Google to search for me images of Acacia thorns and in less than a second I had a few thousand photographs and drawings. Among these images was a drawing of Acacia seyal var. fistula (Fig. 16.1.21). In the same drawing there is also a pair of thorns without swelling. A photograph in the same set of images displays a similar situation (Fig. 16.1.22). Reading the text about A. seyal in Wikipedia led me to understand that we are dealing here with protecting ants living in symbiosis with that Acacia. The relationships in that symbiosis were studied in Kenya, Africa. The information in literature about the presence of A. seyal in Egypt deserves further investigation because of differences in the image of the tree in the new Flora of Egypt. 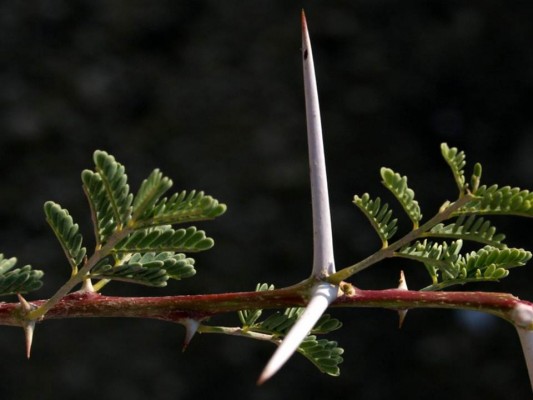 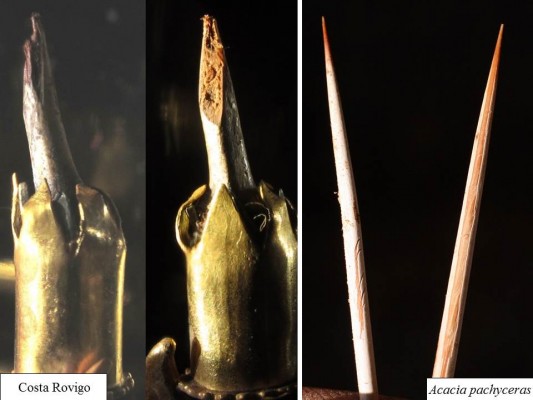 Fig.16.1.19: On the right a pair of stipular thorns of Acacia pachyceras 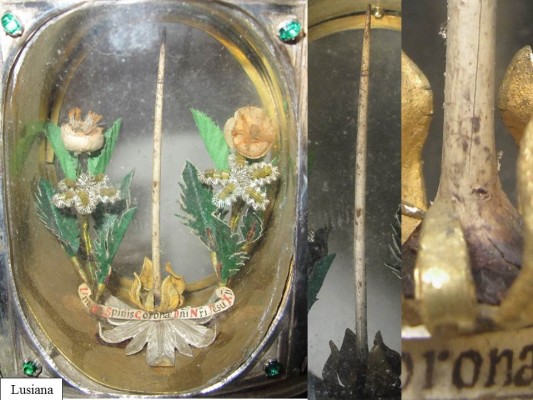 Fig.16.1.20: The Losiana Thorn. The swelling of the thorn base is seen well in the enlargement on the right. This swelling indicates the thorn’s origin in East Africa 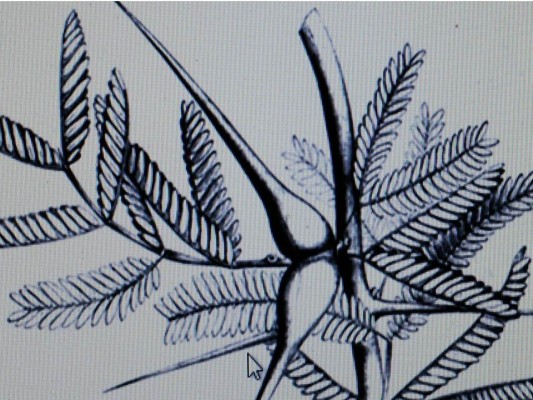 Fig.16.1.21: A drawing of a branch of Acacia seyal. At the base of the upper leaf is a pair of swollen thorns resulting from the impact of symbiotic guarding ants. The stipular thorns of the lower leaf are not swollen (From Engler & Prantl 1889-1915) 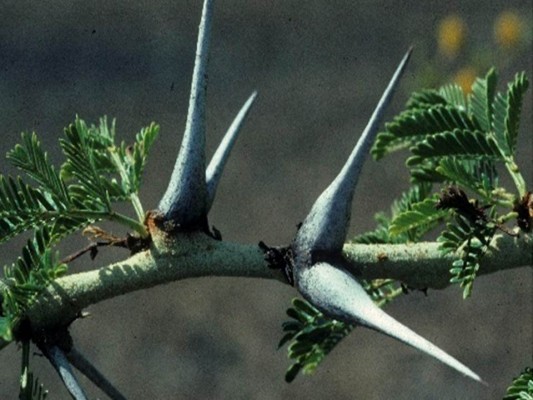 Reading about the symbiosis of Acacia-ants made me very happy. I visited a savannah in Nicaragua in 1977 and Acacia trees with expanded thorns drew my attention (Fig. 16.1.23). I cut one living branch of that Acacia for the herbarium and this act was instantly followed by a painful tingle in my wrist. The irritation at this point continued for a fortnight. Reading articles by D. Jenzen made me understand that I had received a lesson in biological defense from a small acacia-ant (Fig. 16.1.24). I learnt to respect this tree and did not touch it any more, remembering the minute aggressive ants. The vernacular name of Acacia cornigera is cornysuelos (the bulls’ horns). The thorns of this tree are thick, cylindrical and straight. However, after being affected by ants, some of the thorns come to resemble bull horns (Fig. 16.1.25). There are nectary glands on the main axis of the leaf axis (Fig. 16.1.24). The ant-acacias share this property with other African- and American acacia trees.

In addition, Acacia cornigera produces small bodies, rich in proteins, at the leaflets’ tips. Having been discovered by a researcher named “Belt” they are known as Beltian Bodies. The worker ant removes such a body and puts it together with an egg laid by the ants’ queen. There is sufficient food in this body for the proper development of a young ant. The guard ants protect the acacias from herbivores (such as a botanist with a knife or pruning shears in his hands.) They also protect against competing annual plants by cutting their apical meristems; in this way a circle without herbaceous plants develops below the tree (Fig. 16.1.26). The thorns of this acacia are enlarged (Fig. 16.1.27) and the ants make a hole below the tip (Fig. 16.1.28), enter the almost hollow thorn and clean out the soft plant tissue. Into the chamber formed inside the hollow pair of thorns, they bring eggs with a Beltian body for each, thus turning the whole tree into an independent ant nest. 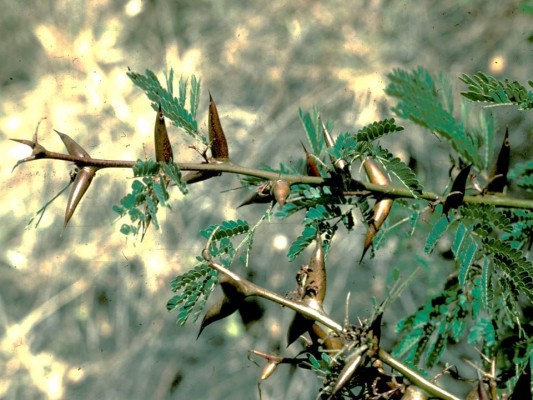 Fig.16.1.23: A branch of an ant-Acacia in Nicaragua (Acacia cornigera(. The thorns are swollen even before the ants’ activity 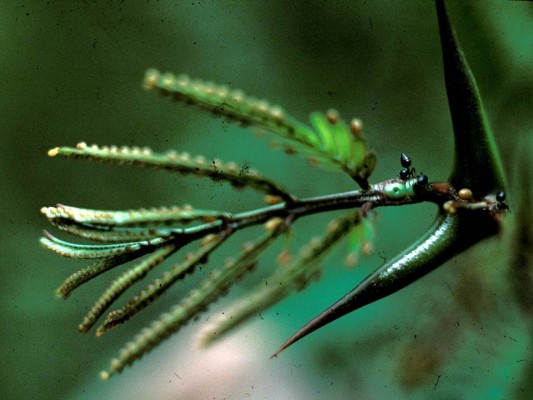 Fig.16.1.24: A young leaf of the Acacia in Fig. 16.1.23. Small black ants stand on- and nourish from three extra-floral nectaries. Brown Beltian bodies are seen at the tip of the green leaflets 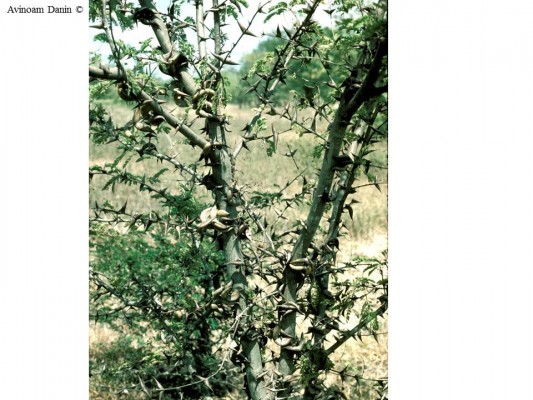 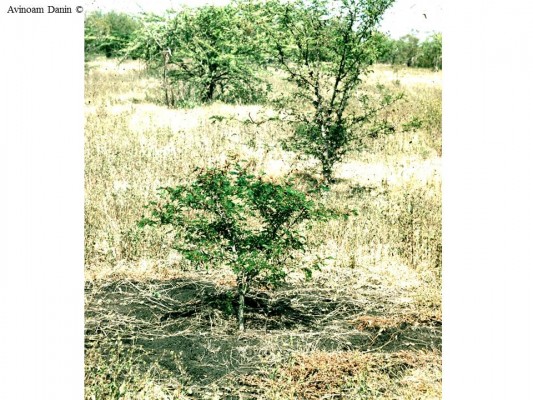 Fig.16.1.26: An Acacia tree with a cleared circle resulting from ants trimming the apical meristems of the herbaceous plants 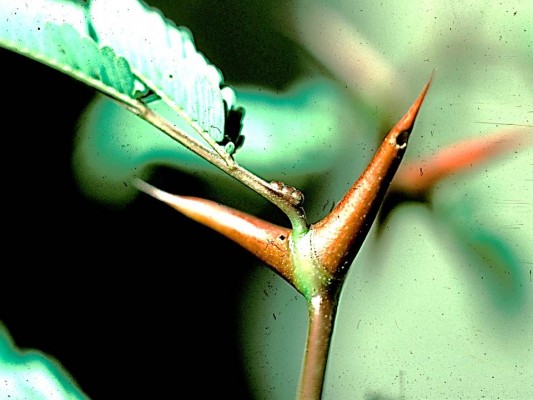 Fig.16.1.27: A swollen pair of thorns with a hole at the upper right side of the thorn; ants are active in the hollow thorn 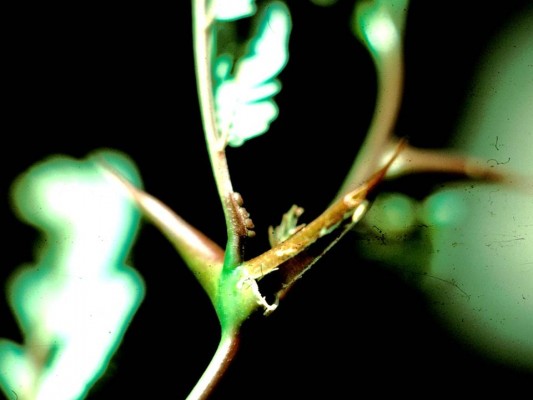 Fig.16.1.28: After cutting the thorn’s wall the hollow space is revealed; it is a part of the ant nest which is the whole Acacia tree

With the aid of the thorn from Losiana I was happy to learn that the evolutionary process of a symbiotic relationship between aggressive ants and acacias took place even in Africa. However, the African thorns differ from the Central American thorns (Figs. 16.1.21, 16.1.22). Let us return now to Italy and to the thorn of Losiana (Fig. 16.1.20). I will try to draw a hypothetical history of that thorn. Since the tree does not grow in Israel and its surrounding countries, Kenya seems to be the most reasonable source. In recent decades, somebody decided that a swollen thorn of Acacia seyal is worthy of use as a holy object. The authenticity of the plant, which grows far away from the Holy Land, did not disturb him/her. Further examination of the photograph of the thorn from Costa di Rovigo (Fig. 16.1.19, left) led me to assume that this thorn derives from Acacia seyal as well.