The image of three fruits of [Pistacia lentiscus], their pedicels and a peduncle carrying them are easily recognized at the right (anatomical) side of the head (Fig. 15.2.9). An enlargement of the fruits’ image is presented in Fig. 15.2.10 and close by fresh fruits and a section from the illustration of P. lentiscus in Flora Palaestina. The fruits of the latter shrub (Fig. 15.2.11) mature in autumn and therefore it is clear that they were not available in the field in March-April (months indicated in [usefulplants04 Fig. 15.1.24]). In addition to the P. lentiscus fruits there are on the cloth plenty of round spots interpreted as fruits of [Pistacia atlantica] and/or of [Pistacia palaestina].

In sites with many fruit spots there are peduncle images as well. They look like straight lines with right angle branches (Fig. 15.2.12). The fruits and peduncles at the left side of Fig. 15.2.12 were taken from a fruit sample I received in a spice shop in the market of the Old City of Jerusalem (Fig. 15.2.13, left). The fruits and peduncles in Fig. 15.2.14 were photographed in autumn near my home in Jerusalem. It seems possible that the fruits which were spread over the body of the Man of the Shroud were obtained in a similar shop or reservoir. 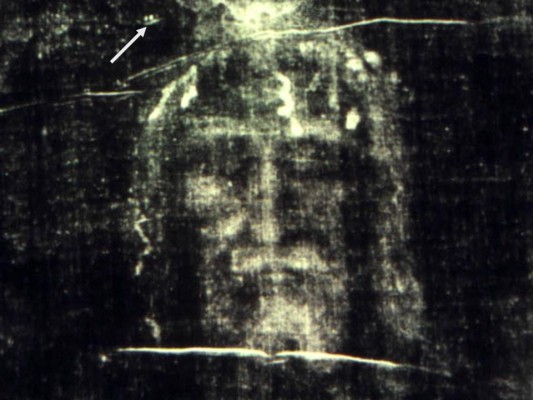 Fig. 15.2.9: The head of the Man of the Shroud in a negative photograph. Arrow directed to a peduncle carrying three fruits of Pistacia lentiscus, 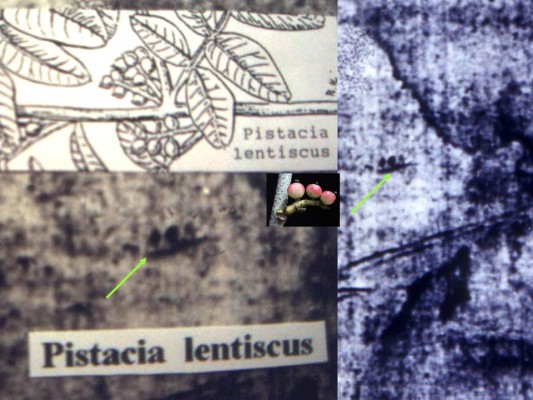 Fig. 15.2.10: On the right side a section showing enlarged fruits; on the left side the fruit-carrying peduncle near a drawing of P. lentiscus in “Flora Palaestina” and a picture of a living peduncle carrying three reddish fruits. 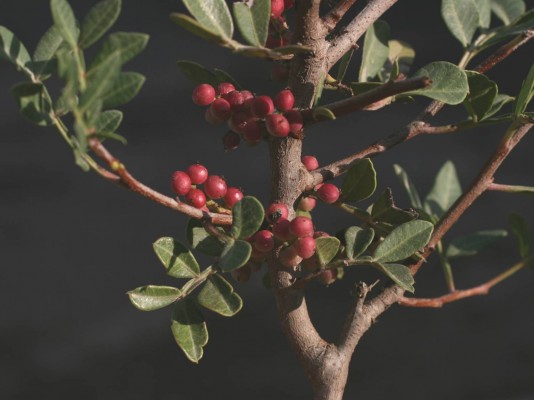 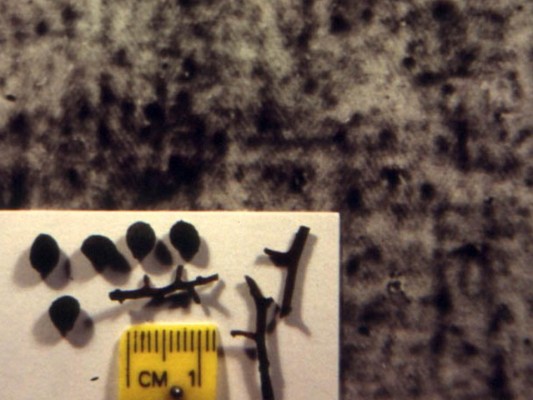 Fig. 15.2.12: A section of the enhanced photograph where large dark spots, assumed to have been caused by Pistacia fruits spread over the body. Remnants of peduncles are recognized by their right angle. At the lower left corner a few fruits and peduncles obtained from a shop in the Old City of Jerusalem (see Fig. 15.2.13). 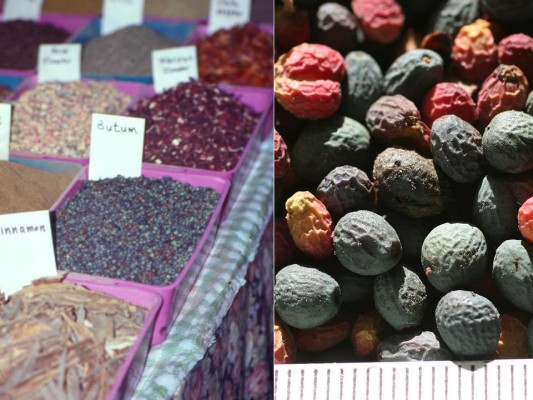 Fig. 15.2.13: A tray of spices of a shop in the Old City of Jerusalem (on the left side); fruits of Pistacia atlantica from a tree, during autumn, in Jerusalem. 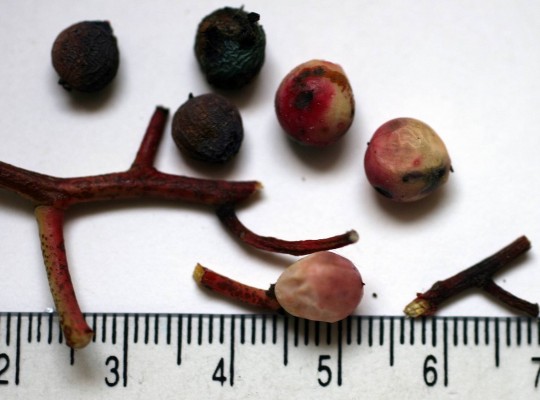 Fig. 15.2.14: Fruits of Pistacia palaestina and branches carrying them after being picked-up from a tree in Jerusalem.

Towards my meeting in the Netherlands with Dr. Soons (a Dutch by birth, living at present with his family in Panama), I prepared a distribution map of all the Pistacia fruits on the Shroud. The source was enlarged photographs at 170% enlargement taken by Vernon Miller (in 1978) with UV radiation. Two photographs made by Enrie in 1931 (fig. 15.2.15) at a 46% enlargement were used as background maps. We do not have information on the aim of spreading approximately 2600 Pistacia fruits on the dead man’s body.

An astonishing discovery of the halo 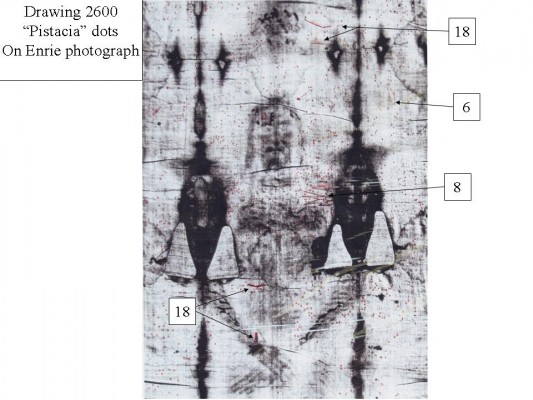 While being in the Dutch Holographic Laboratories in Eindhoven, The Netherlands, I asked the two Walters working there to assist me in photographing the Pistacia distribution maps. When the ventral photograph appeared on the main window of the computer screen, there came a small “thumbnail” photograph the computer prepared as a message I did not try to understand. However, I was astonished to see in the thumbnail photograph a light circle around the head. I instantly called Peter and Dalis Soons, Michel and Donny Soons and the two Walters from the second office and briefly explained what I thought about that “halo”. Peter told me that he already saw it in 2007 and we prepared a manuscript in order to report our discovery to the world. We prepared the material for the electronic journal of the Shroud University in USA.

At home I enlarged the contrast of the photograph in the large window and the contrast in the thumbnail photos became even larger (Fig. 15.2.16). Reading in Mary and Alan Whanger’s book and other books is complementing the picture. The linen which is present today in Turin was brought in the first century from Jerusalem to Edessa (Urfa at present) close to the border berween Turkey and Syria. It was folded four times and covered by a certain cover for protection. The head area was exposed and was seen through a circular “window” in the cover, 50-60 cm in diameter. In the sixth century an icon was prepared in Edessa and was given to the St. Catherine Monastery in Sinai, where it is kept at present (Fig. 15.2.17 up-right and Fig. 15.2.18, right at the upper center). When studying the similarity of the image of the Man of the Shroud and the icon in Siani (Fig. 15.2.18) the Whangers found 240 points of congruence. An American court consider two photographs to be of the same person if they have 40-60 points of congruence.

Following this procedure we may regard above any reasonable doubt that the Shroud of Turin served the artist as a source for the face of the man he portrayed. A fundamental rule in the Christian art is that the artist has to accurately copy the image of the source he draws. Hence, the artist in Edessa saw not only the face of the Man of the Shroud but also the lighter color of the linen he saw. This circle became aged due to the diffused and direct light which came through the “circular window” during the ca 500 years. The rest of the cloth was protected being folded and covered. From now on, after observing the halo around the Man’s head the viewer may see it easily in almost every photograph, positive or negative. Various drawings of Jesus of Nazareth in the Christian world are compared to the Shroud in the permanent exhibitions erected in 2006 (Fig. 15.2.18, right). The halo on the Shroud is not presented there yet as it was discovered and publicized only in 2010. 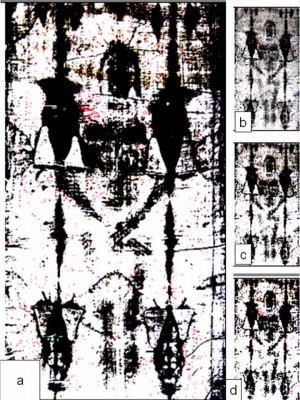 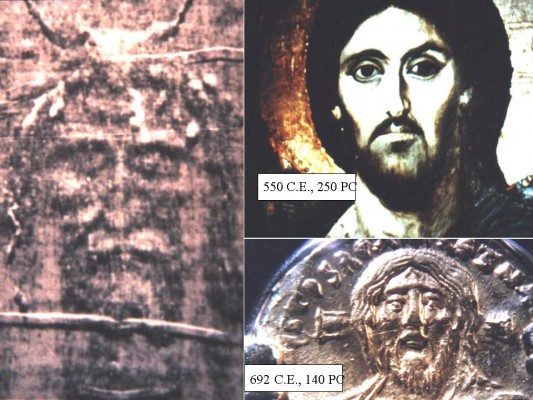 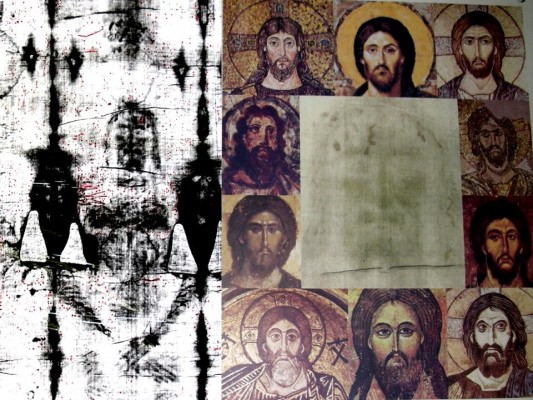 Fig. 15.2.18: A photograph of a panel in the permanent exhibition of the Shroud of Turin where the artistic influence of the physical “halo” formed by faster aging of the exposed linen in a circle 50-60 cm in diameter. 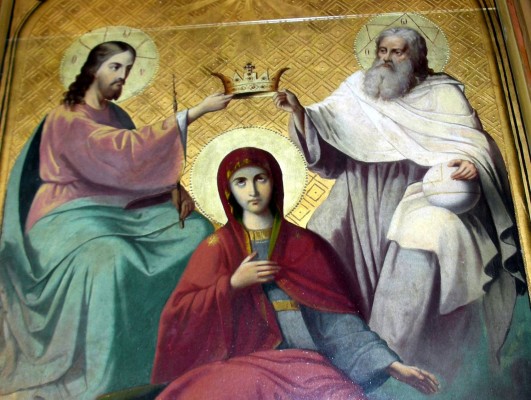 Fig. 15.2.19: Halo drawn around the heads of several saints on an icon in a monastery in western Crete.

I concluded to myself the events associated with the halo as follows: the linen which covered the body of the crucified man in Jerusalem was brought to Edessa, folded four time and displayed when all the cloth is protected in a cover made for it with a circular opening 50-60 cm in diameter. Light penetrating through the opening caused the linen around the head aging and becoming lighter I color. This cloth was seen by the artist who made the icon which was given to the St. Catherine Monastery. The artist expressed the light area he saw as the circle around the head. The image of the Man’s face and the Halo was copied in the past and keeps being copied today in the Christian art. Figs. 15.2.19 and 15.2.20 display icons I have seen in a monastery in western Crete; all the saints have halo around their head. The front wall of the Franciscan Church in En Kerem has (Fig. 959) as scene from Maria’s life when she arrives from Nazareth to Ein Kerem and in addition to her, the winged angels bear a halo. The light reflection of the golden halo of three rows of saints in Fig. 15.2.21 is seen on an icon at the “Catholicon” in the Holy Sepulcher. In the same place I photographed Fig. 15.2.22 where I am surprised to see a drawing of ornament of plants from the sunflower family drawn on the halo. Is there any relation between what I saw in Figs. 15.1.33-15.1.35 to what saw the artist who drew Fig. 15.2.23? Dr. Whanger who studied the icon of St. Catherine (and displayed in Fig. 15.2.17) identified flowers drawn on the halo of this icon. 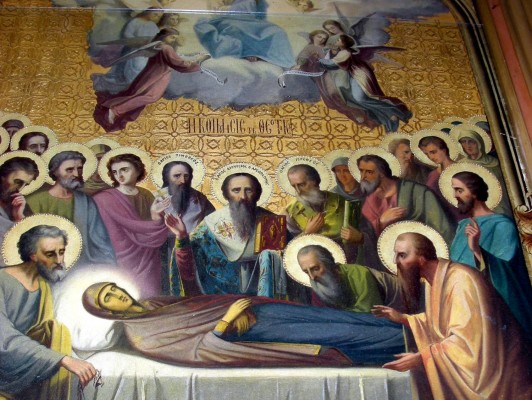 Fig. 15.2.20: Halo drawn around the heads of all the saints on an icon in a monastery in western Crete. 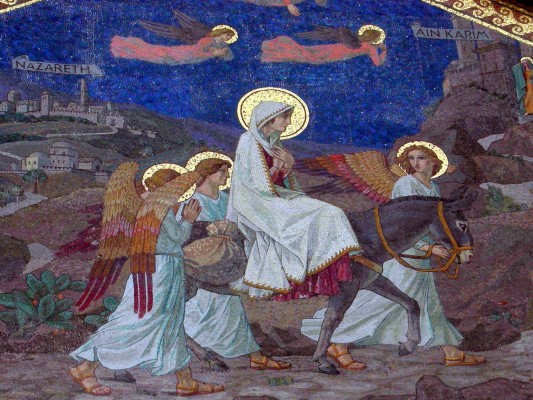 Fig. 15.2.21: Halo drawn around the head of Maria and around the heads of the angels accompanying her on her way from Nazareth to Ein Karem, in the front wall of the Visitation Franciscan church in Ein Karem. 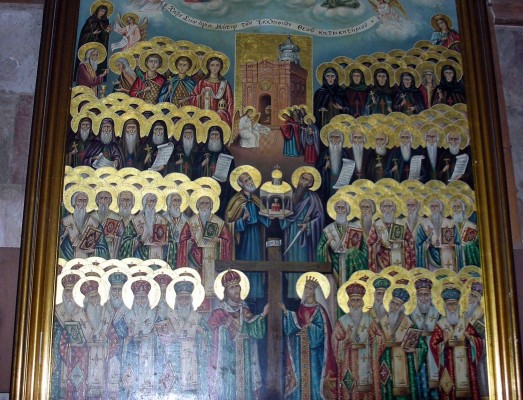 Fig. 15.2.22: The golden halo around the heads of all the saints in the Catholicon in the Holy Sepulcher, the old Jerusalem; the halos are prominent on the dark background of the site. 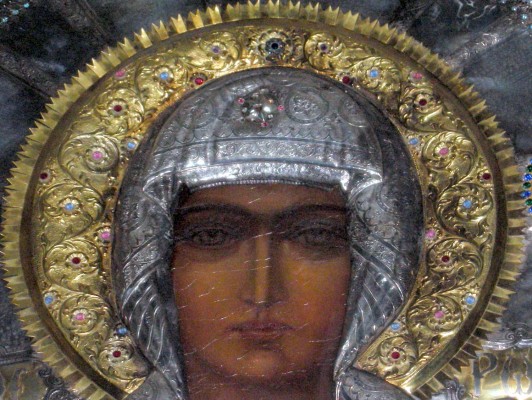