My friend and colleague, Dr. Petrus Soons, a retired MD, saw clearly the possibility of obtaining three-dimensional information from the diverse shades of gray color present in the black and white photographs of the cloth. This idea has already been suggested by other researchers in the past. Attempts to use space investigation computer programs showed interesting results. The Enrie photographs were scanned on the initiative of Dr. Soons and his colleagues in the Dutch Holographic Laboratory in Eindhoven. By this procedure, they recorded the gray-scale level of each pixel (=a minute square used as a basic unit in computerized picture analysis). The Argentinean computer expert Bernardo Galmerini transformed the two dimensional digital information of the gray scale into three dimensional information. We can think of the following transformation as if we were building a “house,” where the black area will become the highest parts of the house and the white area will become the lowest.

The result of Galmerini’s computer treatment of the data was a 3D photograph with accurate human anatomy. I would not mention this if Galmerini had not complained of spots of missing 3D information on the forehead, the right cheek, and several places on the waist. Dr. Soons recalled that he saw Whangers’ publication from 1998 where I had marked flowers on a photograph from 1931 (cf. [usefulplants01 Fig. 15.1.8]). We started to work together on the location of flowers and three dimensional investigations. Preliminary study of the man’s image as photographed in 1978 by photographic methods differing from those of 1931, showed the presence of hundreds of flowers in the head area. On the head photographs made by Vernon Miller with UV radiation (Fig. 15.1.33) we observed many flowers that resembled the inflorescence model of the [http://flora.huji.ac.il/browse.asp?lang=en&action=browse&group=1 Asteraceae] (sunflower family). Flowering heads of [Anthemis bornmuelleri] and of [Matricaria recutita] match the “flowers” seen on Miller’s photographs in their morphology and size.

Models were made (Figs. 15.1.34, 15.1.35) to show how the head area might have looked, together with these inflorescences. The inflorescences of [Anthemis] and of [Matricaria] are borne on rather long peduncles (stems carrying inflorescences). I had to cut these peduncles in order to photograph Figs. 15.1.34 and 15.1.35. The fact that some 300 inflorescences were laid, means that these were not spread at random but placed on the face of the dead man in an orderly manner. In places where the flower carpet was dense they became a barrier to the radiation that came from the body and prevented the accumulation of 3D information, about which B. Galmerini had complained. 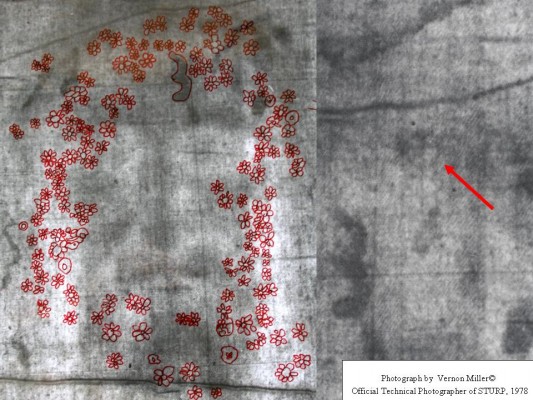 15.1.33: Location of flowers in the head area. Light supply for photography was in the ultra violet range; photographed by V. Miller. On the right, an arrow points to a few flowers. 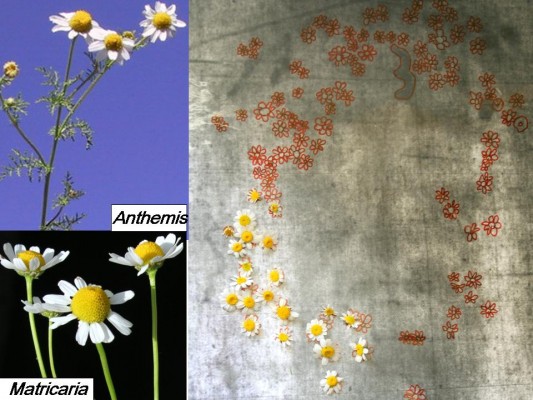 15.1.34: Inflorescences of Anthemis bornmuelleri (upper left side) were removed from their mother plant and laid on flower images with a similar appearance, on the anatomical right side of the head. Inflorescences of Matricaria recutita are displayed on the lower left side.

In St. Louis, in 2008, when Dr. Soons and I lectured on our work, I heard him explaining how the “Crown of Thorns” had wounded the Man of the Shroud. He related to the holograms he prepared from the photographs used also as a source for [usefulplants_01 Fig. 15.1.9]. From observing the holograms he concluded that the head wounds were caused by a “helmet”- rather than by a crown of thorns. After the lecture we sat in the enchanted botanical garden of St. Louis watching fireflies passing in front of our bench. Petrus answered my question about the “helmet” and told me that after preparing life-size holograms he presented them to a group of archbishops in Italy. Being half the length of the whole Shroud, the life-size figure seems to have been more than two meters long. Hence, he and his attendants had to climb a ladder in order to see the upper part of the head.

This was the first time in history that that part of the head of the Man of the Shroud was seen. Dr. Soons is a doctor of medicine, and testified that he saw many small wounds indicating the effect of a helmet rather than of a crown. A crown would have left a belt of wounds above the forehead. I was happy to hear his explanation, which tallied with my recommendation to Dr. Martine Ferre to include the helmet of thorns ([useful_plants04 Fig. 15.1.32]) in all the exhibitions. So far she has set up similar exhibitions with Fr. Guerra in Jerusalem, Rome, Sacramento in California, and San Paolo in Brazil. 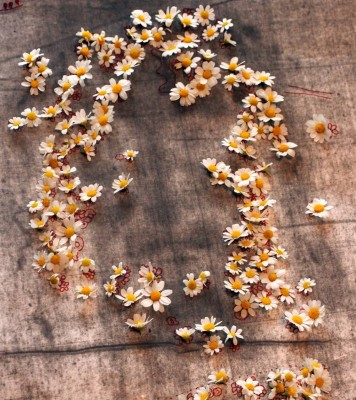 15.1.35: Inflorescences of Anthemis bornmuelleri removed from the plants and laid on all the flower marks.