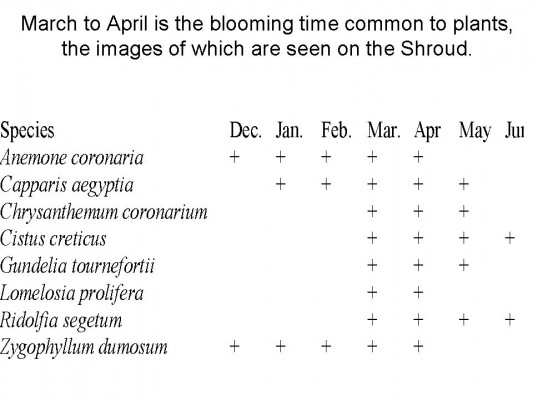 Fig. 15.1.24: Blooming months of eight species identified on the Shroud of Turin. Flowering plants of these species could be put on the dead man’s body only during March and April.

The plant images found on the Shroud may assist us in determining the time of year when their image fixing on the linen of the Shroud took place. We add four more species to the four listed above: [Anemone coronaria], [Lomelosia prolifera], [Ridolfia segetum] and [Chrysanthemum coronarium]. All eight may function as “calendar indicators.” The blooming period of each of them differs from that of the others, but the common blooming months are March and April (Fig. 15.1.24).

Another plant links the Shroud to the New Testament: the reed that is mentioned twice in the gospel according to Matthew. In the first reference (Matthew 27.29) they wanted to mock him and put the reed in his hand in place of a “king’s” scepter. In the second reference, the reed is mentioned together with a sponge full of vinegar at the top of the reed given to the crucified man (Matthew 27.48). The name “kaneh” (cane) is part of the name of several species in the flora of Israel. In Fig. 15.1.25 a cane of [Arundo donax] (the giant reed) is placed near the photograph of the reed on the Shroud. A common morphological property of the reeds in Israel is the remnant of the leaf base at the internode. This remnant is rather prominent in the upper part of the red rectangle drawn around the reed image. 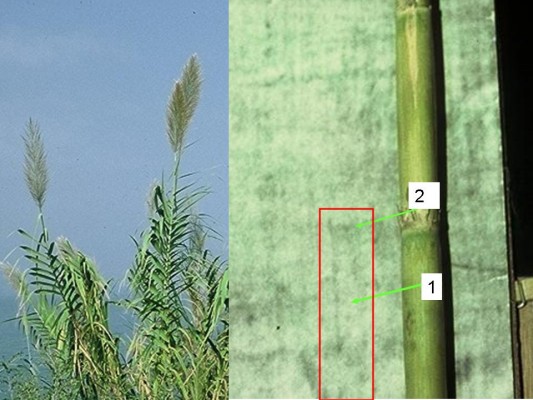 Fig. 15.1.25: An image of a reed segment resembling that of Arundo donax where an internode is clearly seen with remnants of the leaf base seen on the upper part of the image marked with a red line. On the left, a giant reed on the Sea of Galilee beach.

The Crown of Thorns 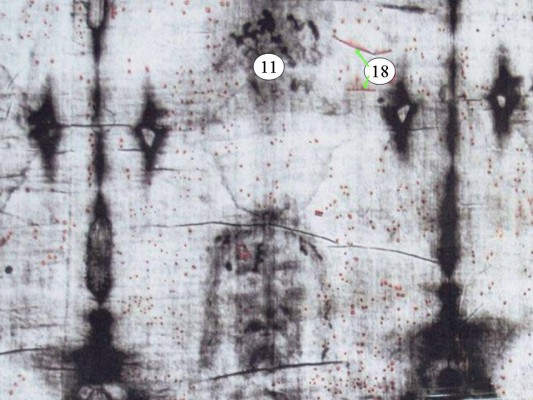 Thorns of [Gundelia tournefortii], [Carduus], [Rhamnus lycioides] (Figs. 15.1.26-15.1.30) and of [Ziziphus spina-christi], which I found as images on the Shroud, are linked to the “Crown of Thorns” mentioned in the New Testament (Matthew 27.29 and John 19.2). Whanger thinks that the thorny plants on the Shroud are parts of two “Crowns of Thorns”; one was composed of flowering heads of [“Gundelia tournefortii” G. tournefortii] that were tied together. One of these inflorescences was displayed and discussed in detail in [usefulplants02 Figs. 15.1.11, 15.1.14 and 15.1.15]. In their book (The Shroud of Turin. Providence House Publishers, 1998), Mary and Alan Whanger presented a model of the Gundelia Crown of Thorns on page 84.

In order to review the second Crown-Helmet we must go to another source of information. A French researcher (Fleury, de, Ch. R. 1870. Memoire sur les Instruments de la Passion de N.-S. J. –C. Paris), studied and drew the Holy Thorns he found in churches in Europe (Fig. 15.1.30). He found thorns that resembled those of [Rhamnus lycioides] and of [Ziziphus spina-christi]. Adding the circular band made of hay and kept in Notre Dame Cathedral in Paris, Fleury (1870) presents in his book a model of the Crown of Thorns according to his perception (Fig. 15.1.31). Dr. Whanger identified in photos of part of the Shroud, at right of the head, a half circle image, equal in diameter and shape to the circle of the Crown of Thorns kept in Notre Dame. Three pairs of [“Rhamnus lycioides” R. lycioides] thorns and three single ones (Figs. 15.1.26-15.1.28) go together with a pair of [“Ziziphus spina-christi” Z. spina-christi] thorns (Fig. 15.1.30) seen on the nape of the neck (No. 11 in the right side of [useful_plants_01 Fig. 15.1.9] and in Fig. 15.1.26).

The findings of the [Rhamnus] and [Ziziphus] thorns on the cloth increase the links between the relict thorns kept in churches in Europe, Fleury’s book, and the Shroud of Turin. In this connection I see as a success our decision to follow Fleury (Fig. 15.1.31), and include a model of his “Helmet of Thorn” in the permanent exhibition of the Shroud in Jerusalem 2006 (Fig. 15.1.32). The helmet was prepared by Michal Raz, born in En Gedi, who devoted much time to learning date-palm basket preparation. Justification for our decision came after Dr. Soons concluded in 2008, from his studies, that the head wounds were caused by a “helmet”- rather than by a “Crown of Thorns.” Further background information is needed to explain Soons’ conclusions. 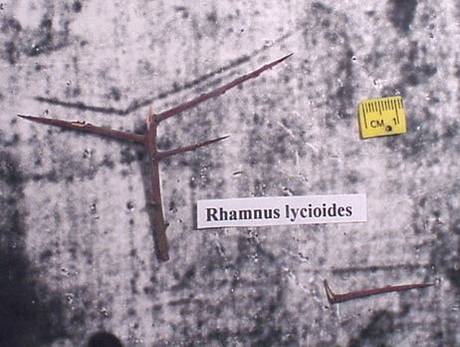 Fig. 15.1.27: A pair of Rhamnus lycioides thorns near their images on an enhanced photograph of the Shroud. The angles between the pairs of thorns and of their images on the cloth ranges between 150 and 155 degrees. 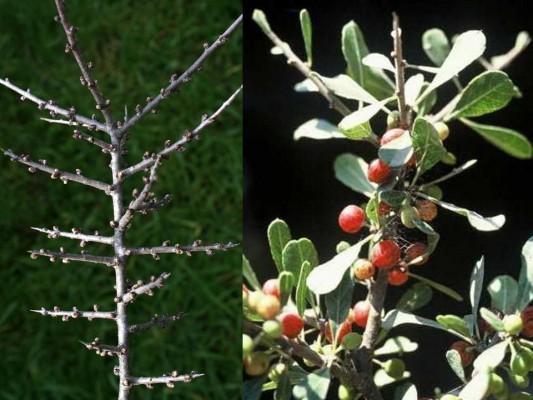 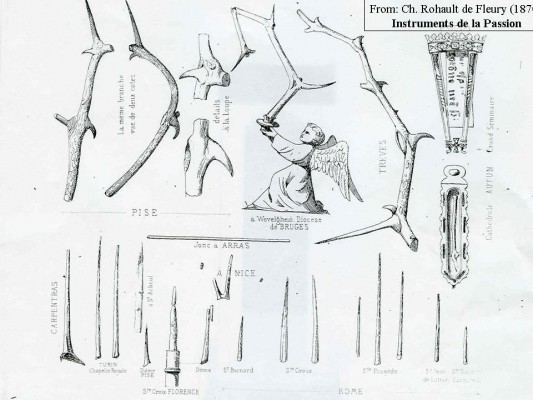 Fig. 15.1.29: “Holy thorns” seen by Fleury (1870) in churches in Europe. He recognized thorns resembling those of R. lycioides and of Z. spina-christi. 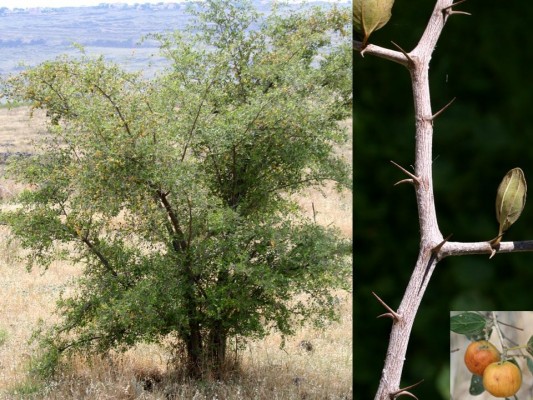 Fig. 15.1.30: A Ziziphus spina-christi tree on the Golan slopes; a branch with eight pairs of thorns, one straight and the other hooked; two ripe fruits. 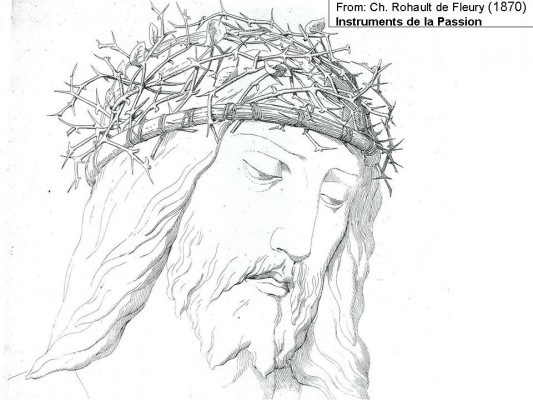 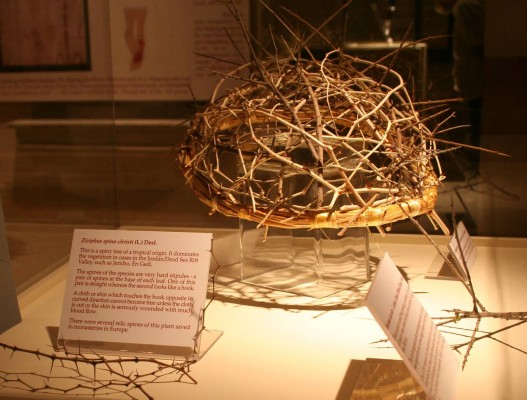 Fig. 15.1.32: A model of the “Helmet of Thorns” prepared by Michal Raz from stems of R. lycioides and of Z. spina-christi according to Fleury’s model.