Contribution of the Plants in Determining the Authenticity of the Shroud

The Shroud of Turin (Italian – La Sacra Sindone; Latin – Othonia; French – La Saint Suaire; Spanish – El Manto Sagrado or La Sabana Santa) is a linen cloth 443 cm long and 113 cm wide, kept in St. John the Baptist Cathedral in Turin, Italy. On the cloth is the image of a man, seen from its ventral- and from its dorsal side. The man’s image has been the subject of many studies and dozens of books have been written about it. The researchers studying it are named “Sindonologists.” In addition to the man’s image, I observed the presence of plant images on the cloth (Fig. 15.1.1), which I studied and about which I wrote articles and books. I saw the plants in photographs from 1898, 1931, 1978, and even directly on the cloth (in 2000). The plants I discovered became indicators of its origin, of the time of the year when the man was wrapped in it, and of the thorns that caused some of his wounds. 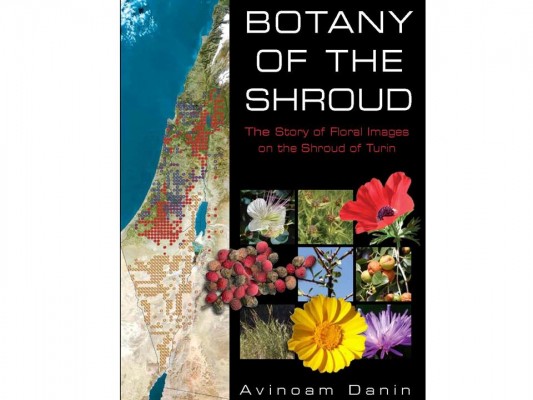 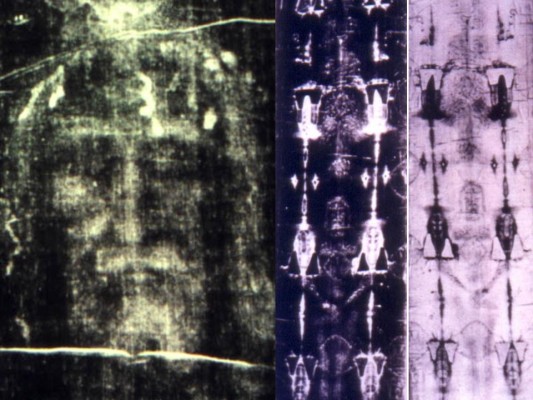 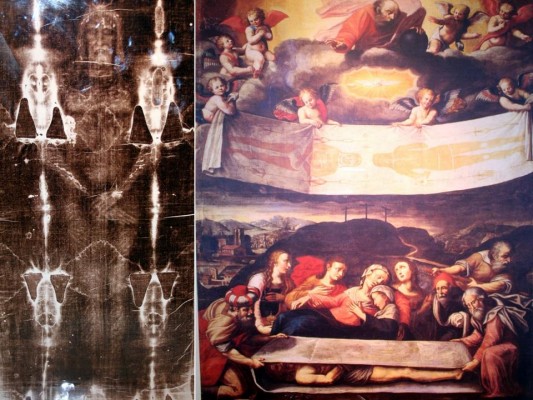 Fig. 15.1.3: A drawing from the 16th century by Giovanni Battista delle Rovera and a photographic negative of the ventral view made in 1898 by Secondo Pia in Turin.

In the 16th century, the artist Giovanni, Battista delle Rovera showed the way in which the man’s body was probably wrapped in the Shroud, upon which his image became imprinted (Fig. 15.1.3, right). The Man’s image and the plants’ images are not drawn or painted on the linen, but are seen the way they are, due to the presence of dark organic oxides on the microfibrils of which the linen is constructed (Fig. 15.1.4). These oxides are assumed to be products of the breakdown of the cellulose molecules of which the cloth is made. The disintegration of these molecules seems to be the result of certain radiation processes, not yet understood which possibly caused darkening of linen parts that were relatively close to the body. In Fig. 15.1.5, the head area is seen on the left, as a “positive,” i.e. when looking directly at the linen itself. The nose looks darker than the cheeks and eye sockets, because of the difference in distance of these organs from the linen covering the body (as in Fig. 15.1.3). The black spots on the forehead are blood spots. A photographic negative of the positive one is displayed in Fig. 15.1.5, right.

Following a basic axiom in mathematics – a negative of a negative is a positive (or a minus of a minus is a plus), therefore Fig. 15.1.5, right, looks like a “true” or “real” image. Its blood stains look light-colored and the stain almost at the forehead center looks like the figure “3.” In the photographic negative, its position is to the right of the nose line, and right of it there is a large blood spot at the angle formed between the left eyebrow and the hair line. In the positive photograph (Fig. 15.1.5, left), the blood stain in the form of “3” is left-right flipped: its position is left of the nose line, and the prominent blood spot at the forehead corner is on its left. In various publications there are faulty printings of the Shroud image or parts of it. There are positive photographs where the “3” spot looks straight, and negatives where the “3” is left-right flipped. We do not yet have a convincing explanation of the physical process which created the image of the man and the other objects on the linen. However, many researchers, including me, are not deterred by this shortcoming, and we continue to invest further efforts in discovering and observing images seen on the Shroud of Turin. 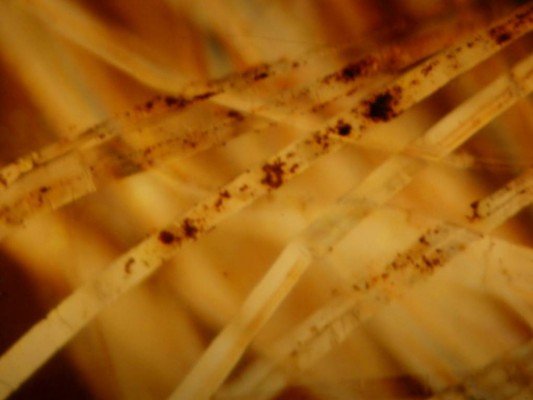 Fig. 15.1.4: Microfibrils of cellulose of which the linen is composed, with patches of organic oxides. The varying concentration of such patches creates the varying shades of gray of each point on the linen. 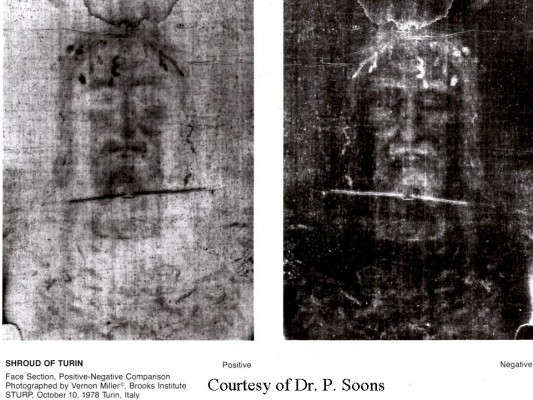 Fig. 15.1.5: The head of the man covered by the Shroud of Turin. On the left is the positive (this is how the linen actually looks); on the right is the photographic negative of the photograph on the left.

My involvement with Sindonological research

Since my childhood I have observed that plants leave their image on the paper I use for desiccating them. A [Sternbergia clusiana] flower I collected in my childhood, some 65 years ago, and desiccated between the pages of a book, is presented in Fig. 15.1.6. The book’s paper is also made of cellulose fibers and a certain reaction made the plant image form on the two pages that touched it (Fig. 15.1.6 top). I have seen hundreds of such images on drying paper during 40 years of botanical work with dried plants. 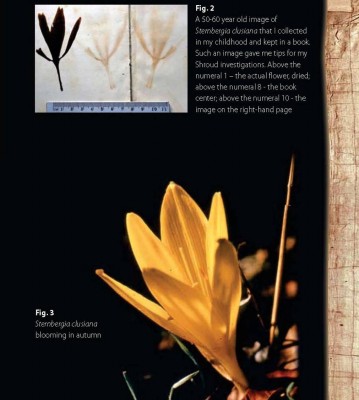 Fig. 15.1.6: Sternbergia clusiana. The top part shows how a flower, desiccated some 60 years ago between the pages of a book, left its image on the cellulose of the paper that was in direct contact with it. 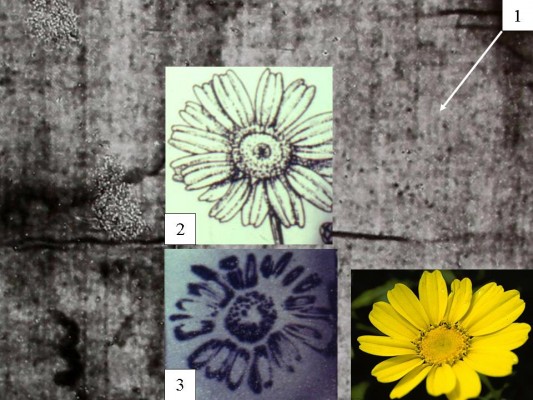 Fig. 15.1.7: An image of Chrysanthemum on an enhanced photograph of the Shroud of Turin (upper right corner); Chrysanthemum coronarium on the lower right; at the center a 1:1 drawing of C. coronarium in the book Flora Palaestina; bottom-center a photograph prepared by the physicist O. Scheuermann using the Kirlian and Kirlian (1961) method.

Dr. Alan Whanger, my friend from Durham, North Carolina, obtained copies of photographic negatives of the Shroud, produced by the excellent photographer Enrie in 1931. Dr. Whanger gave instructions to the photo shop printing it and received enhanced photographs. In these photographs the plant images are seen more clearly than in other photographs of the same linen. When Dr. Whanger and his wife Mary came to my home in 1995, they showed me their photographs. I immediately saw the [Chrysanthemum] inflorescence (Fig. 15.1.7). When visiting their home, I was fascinated by the sight of many flowers I had seen on the enhanced photograph, and marked their margins with a red pen on a transparency (Fig. 15.1.8). While staying at the Whanger’s home I learnt a lot from them and from their occasional guest, the late Dr. Alan Adler. The sites where plant images were discovered are marked on photographic negative of the Shroud (Fig. 15.1.9). 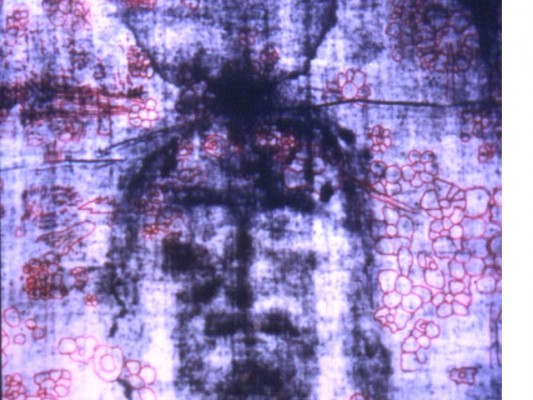 Fig. 15.1.8: An enhanced photograph of the Shroud of Turin where plenty of flowers were seen and marked in red on a transparent sheet. 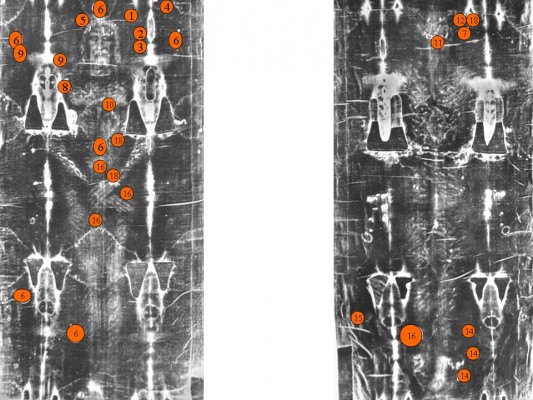 500x Fig. 15.1.9: Location of plant parts on the cloth:
1. Chrysanthemum cf. coronarium inflorescences 2. Cistus creticus flowers 3. Lomelosia prolifera 4. A fruit of Hippocrepis unisiliquosa 5. Three fruits of Pistacia lentiscus with their pedicels on a peduncle 6. Fruits of Pistacia atlantica and/or P. palaestina 7. Inflorescence of Ridolfia segetum 8. An inflorescence of Gundelia tournefortii 9. Flowers of Capparis aegyptia open and about to open 10. Leaves of Zygophyllum dumosum 11. A pair of Ziziphus spina-christi thorns 12. A flower of Anemone coronaria 13. A node of a reed stem with an internode and leaf base remnant 14. Rope fragments totalling 10 m. 15. A broom from an inflorescence of Sorghum vulgare 16. A flower bouquet 17. Four inflorescences of Carduus 18. Pairs- and single thorns of Rhamnus lycioides.