Uninvited guests in my neighbors' flower-pots

It was a planter on the lawn of my ornamental garden, broken long ago, that aroused in me waves of nostalgia and botanical thoughts, and urged me to undertake a small detective expedition into my close vicinity. When checking the plant remnants, I was surprised to see that the largest plant was [Dittrichia viscosa]. Its root system was holding the soil and the Pelargonium (erroneously called Geranium by gardeners) looked like a parasite on the [Dittrichia]. This pot “told” me that long ago its owners bought special compost soil, planted the Pelargonium and enjoyed its green leaves and its red flowers. During the last few years they stopped turning the soil, as indicated by the thick moss crust in all the pots. The irrigation, often in “superfluous” quantities, continued to be the only kind of attention it received. 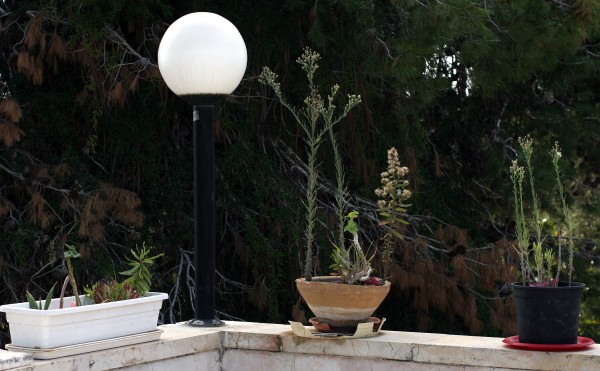 Fig. 10.1.1: A corner of the balcony with the background of pine trees planted near the house. Prominent plants in the pots are uninvited guests.

I was smiling to myself while recalling the book “The Little Prince” by Antoine de Saint-Exupery. I recollect a drawing of the small star broken by the roots of the baobab tree. This was the star of someone who did not care very much about the baobab seedlings. Here was my chance to see something similar. I have never seen [Dittrichia viscosa] (in Hebrew called “tayoun davik” and I’ll refer to it here as “tayoun”) growing in an ornamental pot. When I came to visit my neighbors to express condolences (SHIV’A – in Hebrew), I saw the rest of their pots, a few of which are shown in Figs. 10.1.1-10.1.4. Each pot was populated with an ornamental plant and uninvited visitors. These visiting plants have common components in the history of their establishment, each in its own way. Those who tended the pots during the last few years, only irrigated them. There is something in the history of the neighbors’ expanded family that explains the tragic connection between them and the crushed tayoun on my lawn.

When the family’s mother was 16-17 years old they were “transported” from Hungary to a concentration camp. The Nazis shot her brother, her sisters and her parents in front of her, but rejected her request to be shot as well, “You will have to work for us.” Thus she survived with a number tattooed on her arm. After the war she immigrated to Israel, by boat, with her husband, but was deported to a refugee camp (yes, another camp surrounded by barbed wire) in Cyprus. Their first son was born in Cyprus. They had difficulty establishing themselves in Israel and the USA, but finally returned to Jerusalem. They lived for more than 30 years in our house with their youngest son, who passed away in November 2009. The family’s father passed away a few years ago and since then the mother and the house are taken care of by a wonderful woman from the Philippines. Carmelita likes flower and plants and the pots she planted are green and well-tended. She told me that the other pots (Figs. 10.1.1-10.1.4) were already there when she arrived some 5 years ago. The abandoned pots are probably those planted with ornamental plants during the time when the family’s life was more or less normal. The hardship experienced by the mother after many of her dear ones passed away caused her to neglect the pots.

Why the tayoun is overwhelming

[Dittrichia viscosa] is a dwarf shrub, growing near swamps, springs, and river banks in most countries around the Mediterranean Sea. It demands light and moist to wet soil in summer. Millions of its seeds are windborne at the beginning of the winter, and are deposited like a “rain of seeds.” The plant germinates and establishes itself only in sites where there is water available in summer. This makes it suited to invading open niches near springs and swamps. I was overwhelmed to see tayoun blooming near springs in the extreme desert areas of southern Jordan. However, its basic adaptation is to live near water and disperse seeds on the wind. Of the millions of seeds produced annually only a few germinate and establish themselves. No less surprising were a few specimens growing for a few years on crushed rocks along the renewed highway from Yerokham to Beer Sheva, in Mt. Tsavoa. This is similar to tayoun growing in the rainy part of the country. 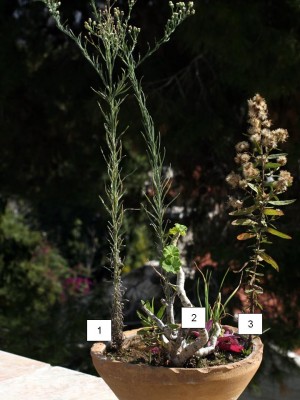 In 1974 the plant also painted the roadside “for me” with yellow flames, between Rion-Antirion and Delphi (yes, it is the place of the legendary oracle from Delphi). The plant uses the rain water in summer; its competitors for the water, the winter annuals, disappeared from the area after new soil (in fact crushed rocks) was brought by the road constructors. When using this same road in 2000, I saw no tayoun plants there, and the regular maquis plants grew again at the roadside. I have carried out much observation of the tayoun and reported on it rather briefly. The tayoun found an ideal site in my neighbors’ pots. The hardships the family suffered in everyday life made them forget the duty of uprooting foreign weeds. The results of the warning “Children! Beware of the baobabs” started to be effective here. The germinating tayoun was not pulled out and its roots reached every soil grain in the pots. If you remove the tayoun there now, you remove all the soil in the pot.

A companion to the tayoun is [Conyza bonariensis] (No. 1 in Fig. 10.1.2) on which I wrote long ago in [postcard2 “Postcards from South America”]. 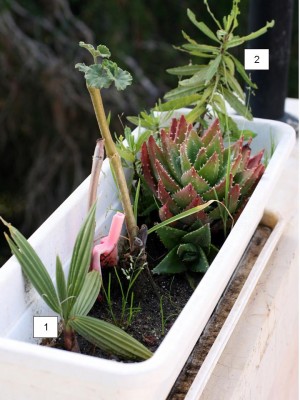 A [Washingtonia robusta] tree is marked 1 in Fig. 10.1.3. It appears to be a seedling, but it could well be a two-year old plant. It was originally an indigenous plant growing near springs in southern California and Baja California, in Mexico. One of the first [Washingtonia] trees was planted 70-80 years ago by other neighbors, some 100 m away from our home. Our original house was replaced by a new one in 1978 and there were no plants growing in the soil in our garden. The contractor said to me: “Mr. Danin, I brought you dead soil” (meaning that he brought soil from deep down, to avoid transferring weeds; but he transferred in the soil small bulbs of [Oxalis pes-caprae], which we have still not succeeded in uprooting to this very day).

Small birds eating Washingtonia fruits far away excreted the hard-coated seeds while standing on the canopies of the pine trees. The seeds germinated and when the roots of two trees reached the depth of the rusting pipes underground they grew up rapidly. The trees are 9-10m high; however, they are far from our neighbors’ pots and lower than their balcony. We are therefore obliged to “blame” the small song-birds for the final transference of this palm tree (Fig. 10.1.3) from other places. These birds also give us their pleasant wake-up songs each morning. 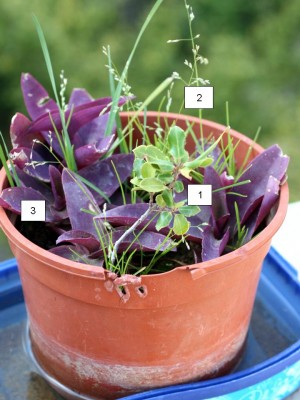 [Quercus calliprinos], the king of the woodlands of the Judean mountains, Carmel, and Galilee, is far from being considered an invasive plant. Its association with [Poa infirma], [Conyza bonariensis] and [Dittrichia viscosa] seems odd (Fig. 10.1.4). The most likely possibility I see for this situation is that a Jay brought it (they love oak acorns and their beak is adapted to the acorn size). Jays dig a small hole in the soil and hide an acorn there. By forgetting all their treasure hiding-places, these birds actually disperse the oak. The tree suffers in the pot at present. It is hard to guess how long it will withstand the extra water, which decreases the aeration and oxygen needed for root activity.

In conclusion – a deep sorrow entered the home of my neighbors and took away the desire to tend the older ornamental pots. Winds and birds transported diaspores of plants and their establishment caught our attention.