The Development of Urginea "Families"

One of the names used for the plant in various places in the Mediterranean area is “the bulb of the dead” (according to HaReubeni 1941). Every one who passed near the closed Golden (Mercy) Gate of Old Jerusalem, has seen the squill field beside the Muslim cemetery (Figs. 9.2.1-9.2.3). How does the leaf circle of Fig. 9.2.3 become filled up, and how is it related to a single individual as presented in Figs. [usefulplantsi1 9.1.4] and 9.2.3? This question bothered me for some time. I studied a squill with two leaf rosettes (Fig. 9.2.4). I removed the dry brown outer scales which are old leaf-bases. Years previously they stored photosynthesis products and the plant used them later. The scales were attached to the stem which looks round with circular depressions.

The Hebrew term used for the bulb’s stem is “the bulb’s cake”. The bulb in Fig. 9.2.5 displayed a hidden depression between the two leaf rosettes; its nature was understood later when leaf-base removal took place (Fig. 9.2.6). Among the two leaf groups there was a thin, narrow brown scale (Fig. 9.2.6). The latter was the base of an old inflorescence. The removal of all the young leaves exposed the two apical meristems (Fig. 9.2.6). What caused the splitting of the bulb’s apical meristem into two? As long as the mother bulb (the one with two buds or two apical meristem) did not bloom, the single stem produced a leaf rosette in winter, stored photosynthesis products at the leaf bases and lost its drying lamina toward summer. Those bulbs that were big enough and ready to bloom terminated their apical meristem, which changed into an embryonic inflorescence in summer. 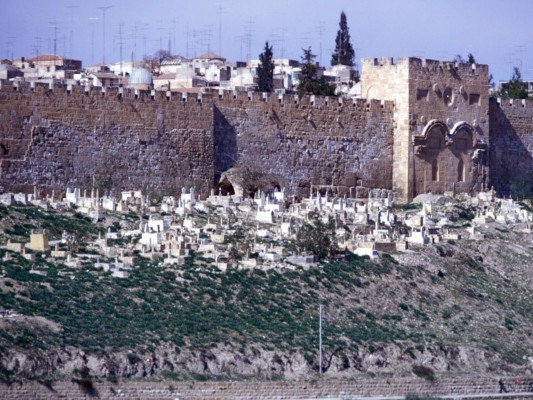 Fig. 9.2.1: The squill is often planted in cemeteries. A Muslim cemetery was established many years ago beside the Golden (Mercy) Gate of the Old City. 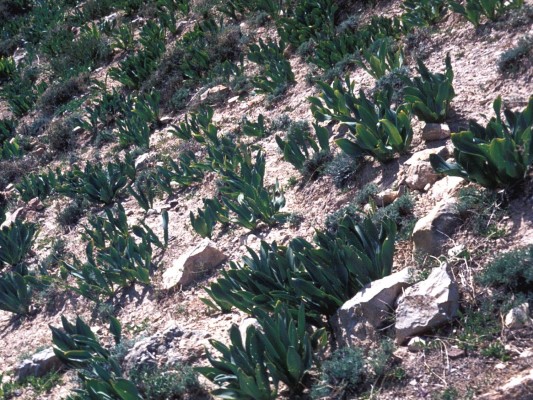 The lateral buds, each in the axile of a leaf base, did not develop because of the “apical dominance.” The apical bud produces hormones which suppress the growth of the lateral buds. Blooming in August-September the inflorescence terminates the activity of the apical bud. When visiting the Lasithi Valley in Crete in 1983, I saw squills that bloomed when the leaves were still green-yellow. Visiting the same place in 2000, the squill behaved as in Israel and bloomed with totally dry leaves. I therefore wrote a note for myself that the squill behaves according to the summer weather before blooming. 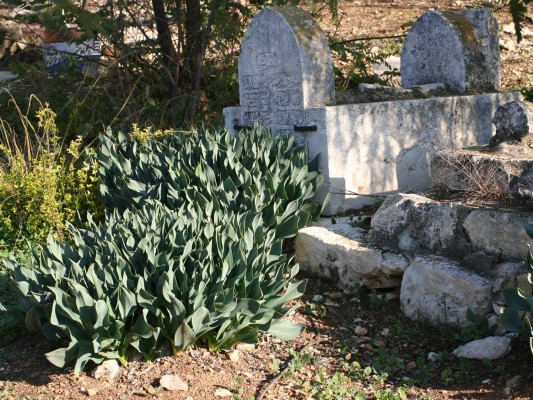 Fig. 9.2.3: Two squill “families” which developed from the splitting of two single bulbs planted near a grave at Mamilla Cemetery, Jerusalem. 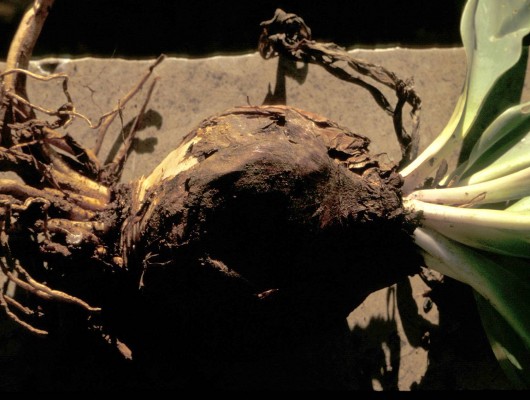 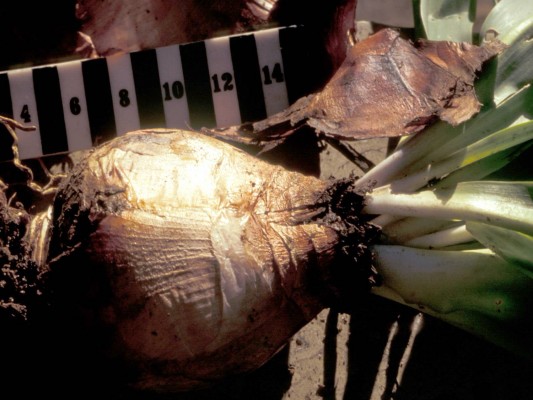 Fig. 9.2.5: The bulb of Fig. 9.2.4 after the removal of brown, dry leaf bases at the bulb periphery. A small depression is seen between two leaf rosettes. 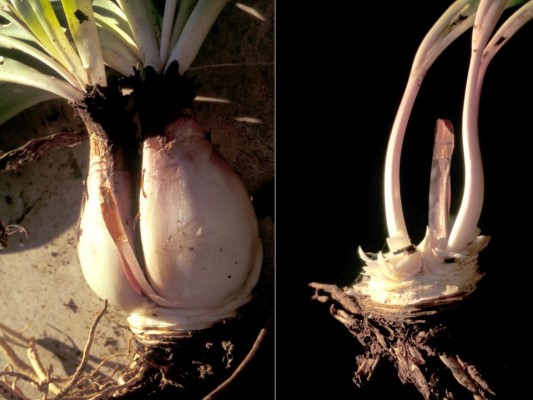 One of the questions I am often asked, concerning the squill, is how the plant “knows” when to bloom. I do not know the answer from any experimental study, but I am ready to open my book of assumptions: The bulb scale is the lower part of the leaf and as shown in Fig. 9.2.8/left, it is thickened and stores food and moisture. Above the number 10 of the scale bar is the dry brown part of the storing scale. From this point upward was the green lamina of the leaf. The latter dried and fell off during the summer. The top of the scale is close to the surface of the soil and may absorb solar radiation which can be sensed by the plant, via chemical changes in the leaf cells, and leads to flowering. Thus, the top of the scale may be part of a “tool” for measuring the length of the day. The scale is thickened between the numbers 1 through 6 on the scale bar of Fig. 9.2.8/right. 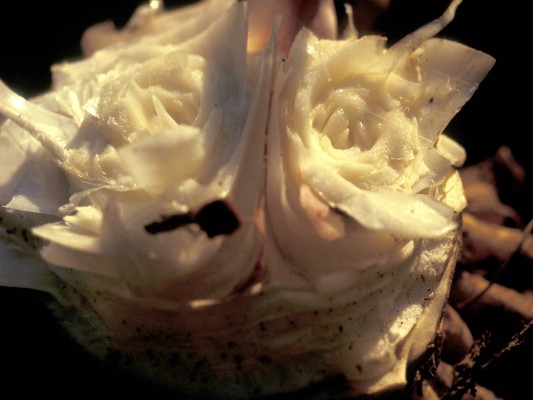 Fig. 9.2.7: Two growth apices of the two daughter bulbs in Fig. 9.2.4. The contact zone of the two bulbs is a straight line or a straight plane in 3-dimensional view. 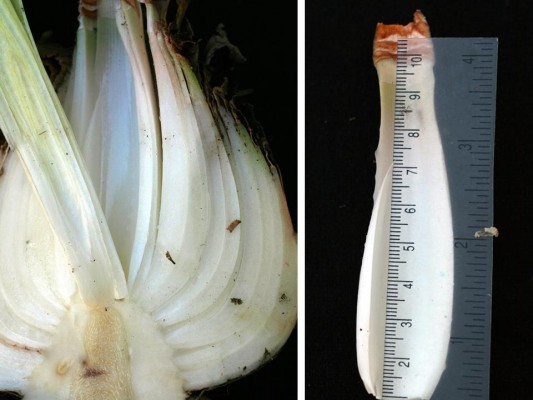 Fig. 9.2.8: A longitudinal section in one of the two bulbs connected and displayed in Fig. 9.2.9 – left, and in Fig. 9.2.10. The peripheral scales are thick and the central ones that have an upper green lamina above the ground are not yet thickened. In the single scale on the right, the section between 1 and 6 on the ruler became thick. The lamina above number 10 dried out and fell off in the summer of its first year. Only the succulent scales remain for several years.

Once the apical bud of the bulb has turned into an inflorescence it no longer suppresses the lateral buds and two of them start to develop within one bulb (Figs. 9.2.5, 9.2.6). An advanced stage is presented in Fig. 9.2.9. The storing scales of the two daughter bulbs, which had a straight plane in their contact zone, grow and thicken. The resulting pressure leads to a tearing of the subtending scales (Fig. 9.2.9/left). The two bulbs still share the “bulb cake” and the part where roots are (Fig. 9.2.10) is in the final splitting stage. They may soon become two independent bulbs. As the years pass, they will reach the stage displayed in Fig. 9.2.3, by the process shown in Fig. 9.2.11. 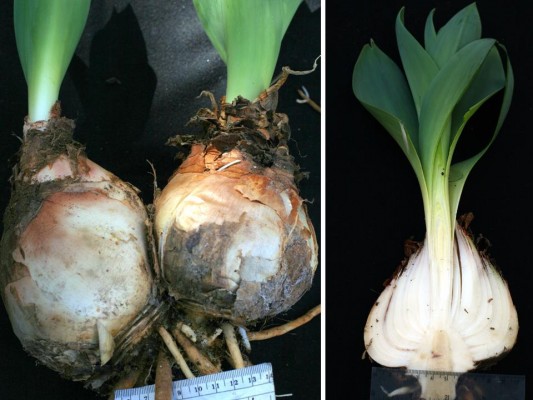 Fig. 9.2.9: On the left, a pair of round bulbs sharing a flat stem which will be separated into two when additional leaf scales develop. The bulbs, which had a straight line or plane among them in Fig. 9.2.7, became round when grown. This action causes pressure on the flat stem (as presented in Fig. 9.2.10). On the right hand side a longitudinal section of one of the bulbs. 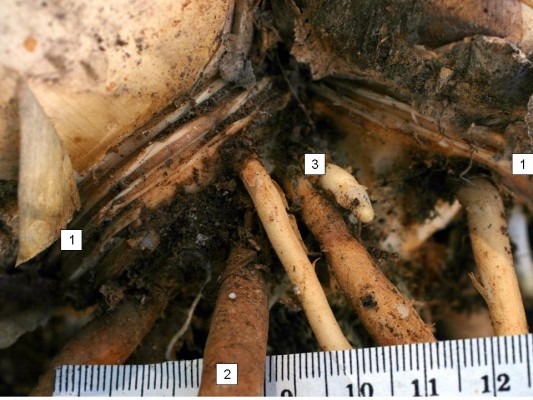 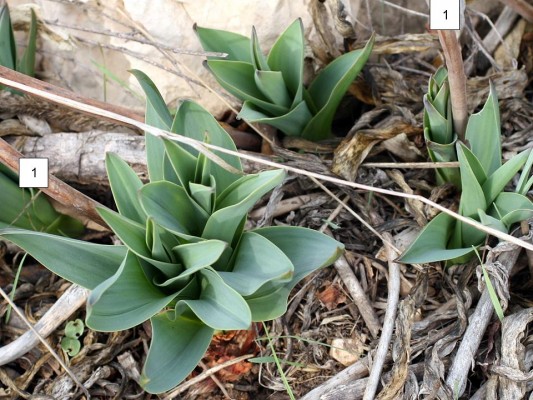 Fig. 9.2.11: Two pairs of leaf rosettes which developed after the inflorescence (1) developed, terminated the growth of the previous year’s stem and did not suppress the sprouting of two buds in each bulb. From now on they will develop in a sequence portrayed in Figs. 9.2.4-9.2.10.

When visiting “Little Petra,” nearly 5 km north of Petra and Wadi Musa, I enjoyed the assistance I got from goats in the bulb splitting story. The sandy soil that is trampled by the large goat herds is easily eroded by wind and exposes the “squill bulb families” (Figs. 9.2.12, 9.2.13). The adult bulb (Fig. 9.2.13/right) containing two daughter bulbs, will soon split into two independent bulbs. The small bulbs in Fig. 9.2.13/left seem to be four or five buds that started to grow as a result of damage to the apical bud of their mother bulb. The squill “family” in Fig. 9.2.14 develops leaves while the flowering stalks of the previous year have not yet dried up. The leaves of the present year developed beside the previous year’s inflorescence (this situation is clearly seen in Figs. 9.2.11 and at the left side of Fig. 9.2.14). All the leaves of the “squill family” seen in Fig. 9.2.15 are the offspring of one individual bulb planted many years ago. 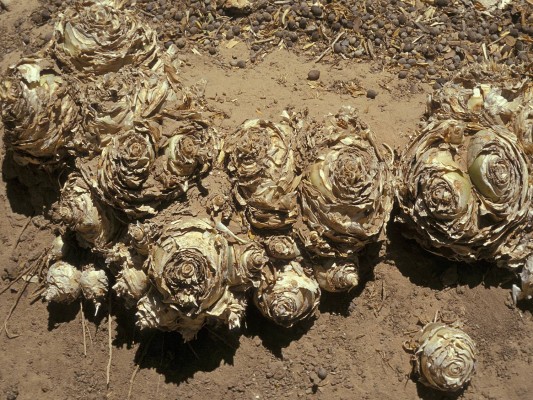 Fig. 9.2.12: A “squill family” exposed in sandy soil near Petra, Edom. The history of bulb division is prominent and often easy to reconstruct. 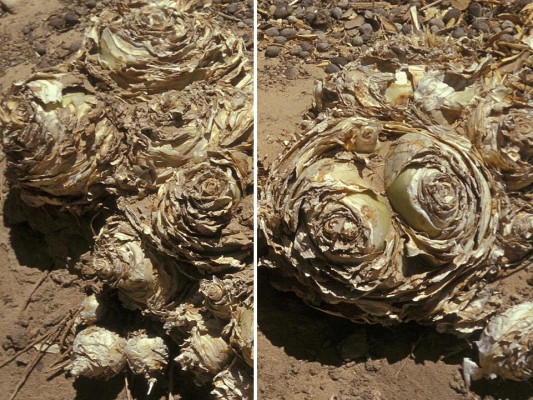 Fig. 9.2.13: On the right, two bulbs still subtended by their mother bulb’s juicy scales; they developed after the flowering of the mother bulb. On the upper left, a pair of bulbs at a slightly more advanced stage compared to the right one. Small bulbs at the lower left seem to have developed following disturbance of the apical bud of their mother bulb. 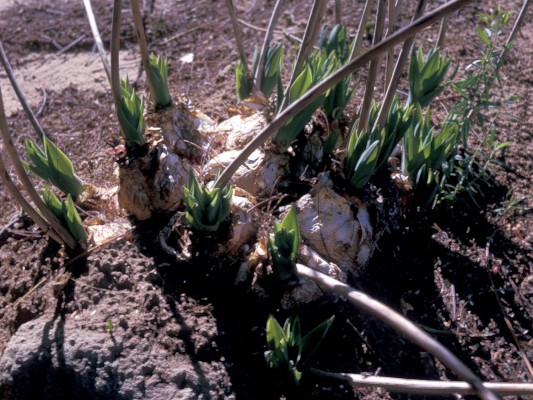 Fig. 9.2.14: A “squill family” sprouting after blooming. The new year’s leaves sprout from the bulb center whereas the inflorescence belongs to the previous year’s growth and occurs in an exocentric position. 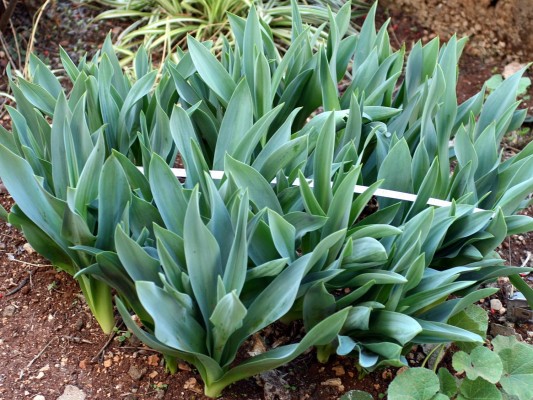 Fig. 9.2.15: A “squill family” which developed from a single bulb planted in an ornamental garden at Meshoreret Rachel Street, Jerusalem. The tuft diameter approaches 1 m and according to the number of leaf rosettes, it has four generations of blooming, growth and rounding of the bulbs, and division, after their stems split.