When my daughter Morit wanted to do a study in high school in the framework of the “biotope project”, I suggested that she study plant-ant relationships near Fazael Junction at the Lower Jordan Valley. The differences in plant height near and among the ant-nests on the deep clayey soil in that area were impressive (Figs. 8.6.1 and 8.6.2). Soil tests showed that the quantity of nitrogen salts near the nest is 20 times (!) higher than in the soil among the nests. The dominant plant in the threshing zone of the nests on clayey soils was [Beta vulgaris]. The latter is known as a weed in agricultural fields and we saw here a chance to test a primary habitat where the plant prospers naturally without human interference.

The inflorescence of [“Beta vulgaris” B. vulgaris] (Fig. 8.6.3) has 2-3 flowers in each unit, having five sepals. When ripening, the spherical units fall off and function as many-seeded diaspores. The number of seeds in such a diaspore may vary from 2 to 5 and the sepals and tissues linking the flowers harden. The ants cannot open the diaspores to obtain seeds or parts of seeds from them. I assume that the ants smell the seeds and collect the diaspores into their nest. After unsuccessful attempts to obtain the seeds the workers dispose of the seed-containing diaspores. They germinate and grow successfully and prosper on the nutrient-rich, aerated soil of the threshing zone.

Among the [“Beta vulgaris” B. vulgaris] companions in this habitat there are plants of [Calendula arvensis], [Malva parviflora], and [Echium judaeum]. Several years after the completion of the research, a short while before fulfilling my dream of turning that area to a unique field museum, “soil robbers” removed the upper soil layer, with all its unique vegetation and sold it for the construction of ornamental gardens. However, do not worry, the area did not remain empty, other nice people disposed of their household garbage and building debris. 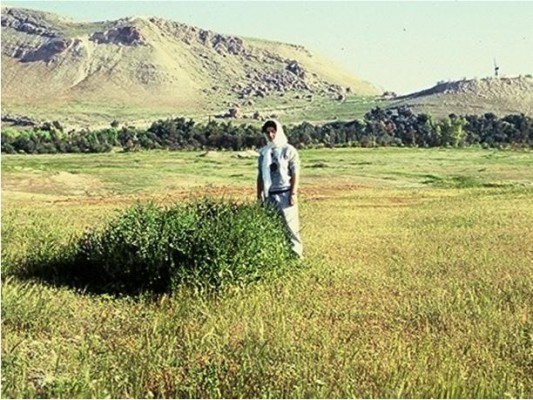 Fig. 8.6.1: A nest of harvesting ants near the monument to fallen soldiers of the Jordan Valley. Plants of Beta vulgaris dominate the lush vegetation above the nest. 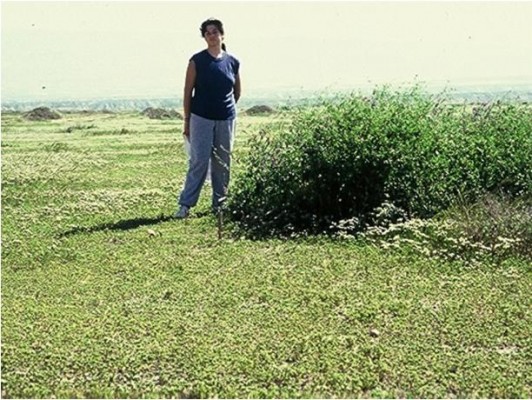 Fig. 8.6.2: A nest of harvesting ants near Yaffit. Plants of Beta vulgaris dominate the area above the nest. 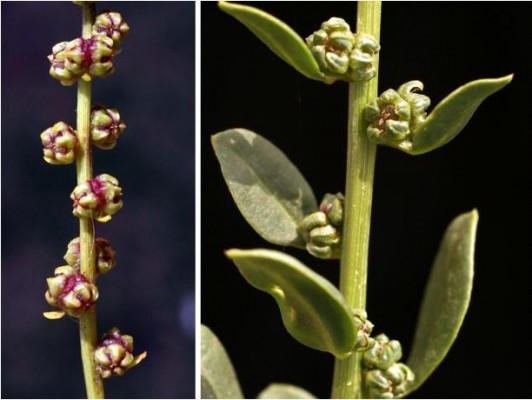 Fig. 8.6.3: Inflorescences of Beta vulgaris carrying flower groups; with bracts (right) and without (on the left). Two to three flowers form a group whose tepals and receptacle harden when ripe.

Plants of [Malva parviflora] achieve local dominance near nests of harvesting ants (Figs. 8.6.4-8.6.6) in the areas between Jericho and Bet Shean. I could not study each ant nest all over the country and evidently there are [Malva]-nests in additional places. This plant is one of the most common ruderal plants. Its diaspores look like slices of a “bread-shaped-fruit” or a “cake-shaped-fruit” (Fig. 8.6.7). The common Hebrew and Arabic name of this plant has the root of “bread” in these languages. In one “slice” of the cake, known as mericarp, there is one seed and the tissues around it become very hard, evidently difficult for ants to open. Here as well, the ants collect mericarps into the nests. The unopened mericarps and the remains of those opened are disposed of to the threshing zone around the nest, thus leading to the formation of a round patch dominated by [Malva parviflora] (Fig. 8.6.5). The [Malva parviflora] leaves move efficiently in accord with the direction of solar radiation; the amount of light passing through the [Malva] leaf “curtain” is minimal and not many species succeed in growing in its company. It is possible that [Malva nicaeensis] is associated to ant activity as well. Its fruits are similar (Fig. 8.6.8) to those of [“Malva parviflora” M. parviflora] and it is a ruderal plant as well. 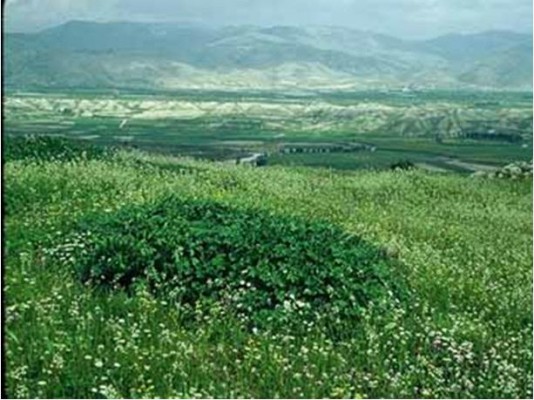 Fig. 8.6.4: A nest of harvesting ants on the Samarian Desert slopes. Above it, Malva parviflora plants are dominant. Eruca sativa, and its companions, dominant in the herbaceous vegetation around the nest, are repelled from the nest vegetation by the shade of the mallow. 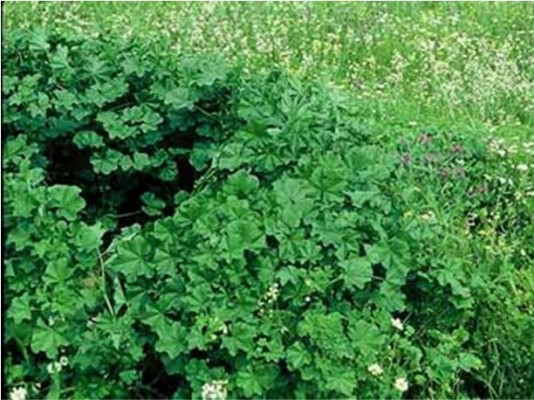 Fig. 8.6.5: A patch of Malva parviflora plants around openings of a nest of harvesting ants. No companion plants are seen. 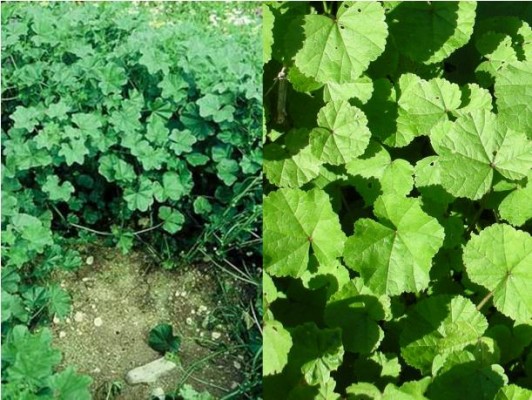 Fig. 8.6.6: On the left, openings of a nest of harvesting ants surrounded by mallow plants covering the entire area. 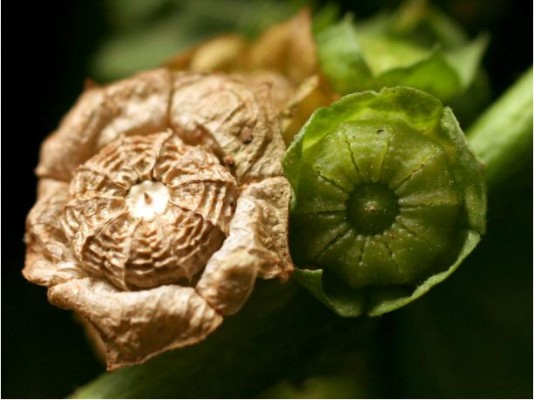 Fig. 8.6.7: A Malva parviflora fruit, known as schizocarp. Each of its components is called a mericarp, contains one seed, and looks like a slice of bread or cake. The plant parts surrounding the seed become hard and make access to the seed difficult. 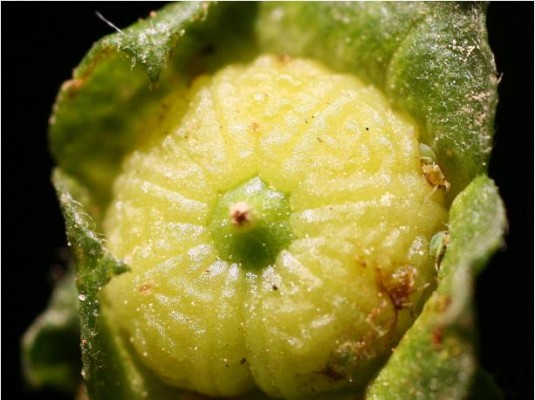 I assume that following the evolutionary processes which led to the formation of the inter-dependence of [Malva parviflora] and the harvesting ants, this plant gained the potential of becoming a ruderal plant. [“Malva parviflora” M. parviflora], which reacts efficiently to a high nutrient situation in the soil, develops a curtain-like area covered by its leaves, preventing light supply to its competitors. At present, encampments of herds (Fig. 8.6.9) may be observed from afar in winter owing to the dark green color of the [Malva] leaves. A cave used as a Bedouin encampment site is prominently seen in Fig. 8.6.10. Bedouin do not use it at present, but the dark green color developing after the winter rains keeps showing the history of the site. The mallow is often accompanied by [Urtica pilulifera] which also responds well to fertile soil under ruderal conditions. 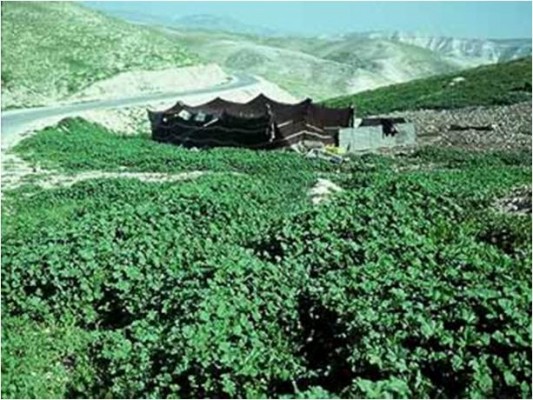 Fig. 8.6.9: A Bedouin tent in the Judean Desert. The site where the shepherd of the goats and sheep used to rest is covered by a carpet of M. parviflora. 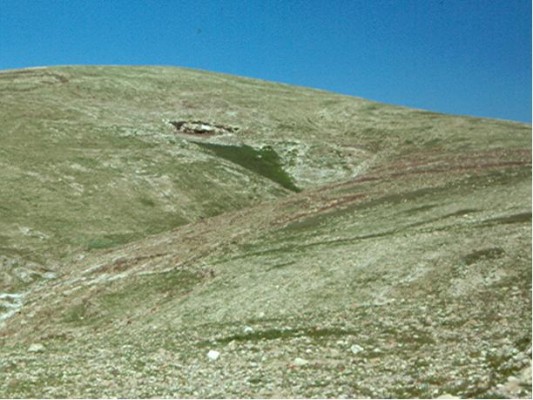 Fig. 8.6.10: A cave on a hill slope near Kfar Adumim. The dark triangular patch in the photo center is dominated by M. parviflora, that developed on animal droppings.