It was clear that according to the criteria of the ant-plant researchers it would not be accepted as a legitimate member. In other words, if I wrote an article on this plant and submitted it to a scientific journal, the editor would send the manuscript to an ant expert and would then reject the article because these achenes have no elaiosome. I collected waste material from the threshing zone of an ant nest with [“Chrysanthemum coronarium” C. coronarium] and discovered many achene coats of [“Chrysanthemum coronarium” C. coronarium]. There are two flower types in each flowering head (Figs. 8.5.6 and 8.5.7). The peripheral achenes are winged whereas the central ones are not winged, smaller and look simple (Fig. 8.5.8). I found un-opened peripheral achenes in those ant nests. 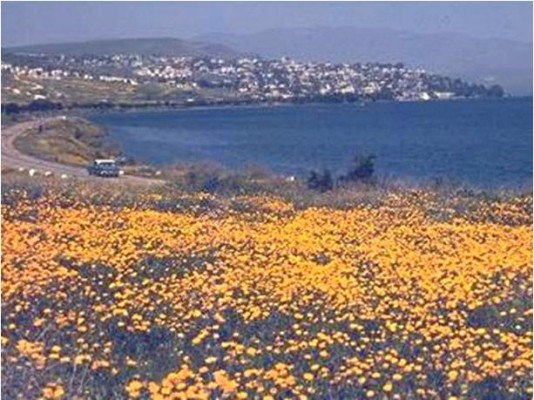 Fig. 8.5.1: Chrysanthemum coronarium is a dominant plant in the Kinneret coastal area south of Tiberias. This area has substratum rich in nutrients. 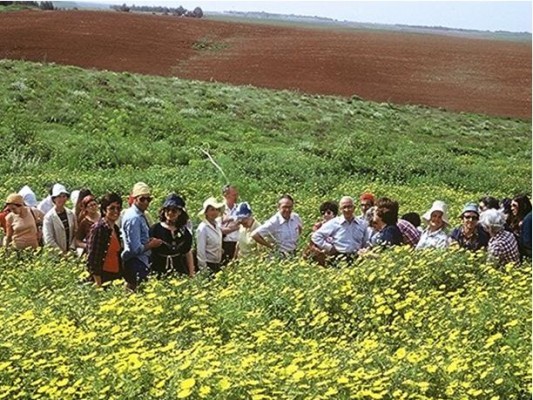 Fig. 8.5.2: Chrysanthemum coronarium as a dominant plant near Horvat Pura, in an area that used to be a Bedouin encampment site. The soil became rich in nutrients from sheep and goat dung. 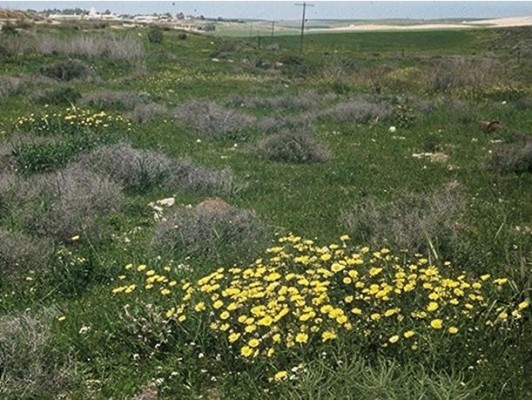 Fig. 8.5.3: Two rounded patches of Chrysanthemum coronarium growing on an ant nest in grassland near Dvira. 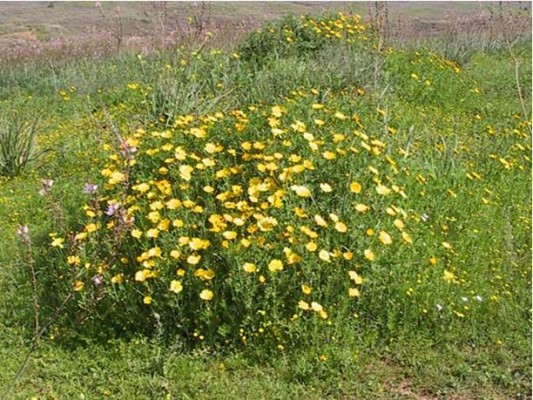 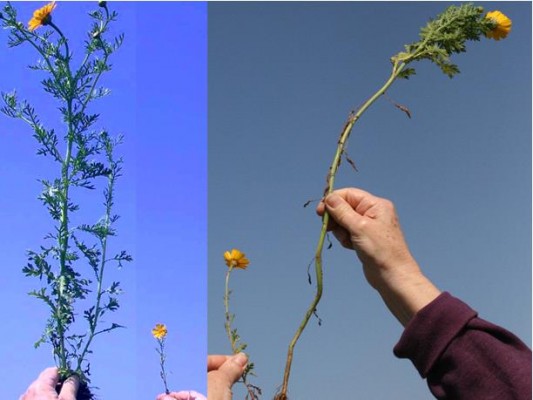 Fig. 8.5.5: C. coronarium from near Bet Govrin (on the left) and from Bnei-Zion nature reserve. The two individuals close to the photo center are from an area far from the influence of an ant nest whereas those far from the center grew near an ant nest. 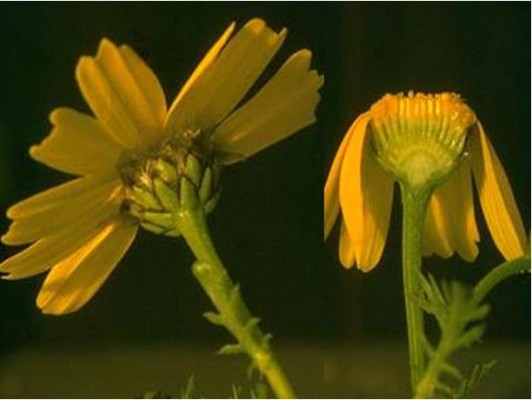 Fig. 8.5.6: A flowering head (capitulum) of C. coronarium in a lateral view and a capitulum in cross-section. 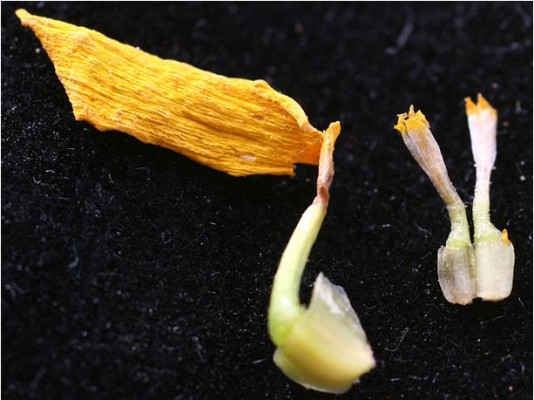 Fig. 8.5.7: Flowers of C. coronarium with their achenes. On the left, a ligulate floret with a large, winged achene (fruit); on the right, two tubular florets with small, wingless achene. 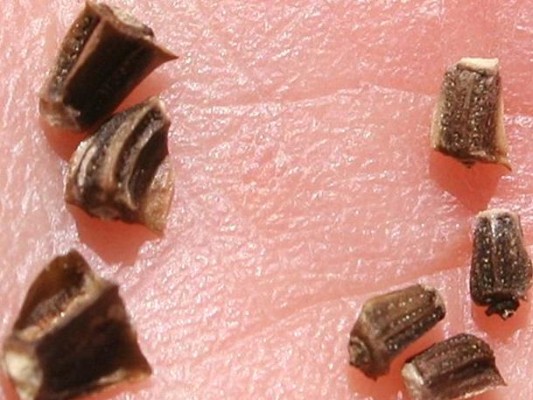 It is possible that the ants did not succeed in opening the peripheral achenes and thus they became an important component of the local seed bank. I did not have time to study this phenomenon further, and hope others will continue studying it. An ant nest in the nature reserve of Bnei-Zion (Sharon Plain) displayed “super-growth” of [Erucaria hispanica] in a similar way to that of [“Chrysanthemum coronarium” C. coronarium] (Fig. 8.5.9).

Most ant nests supporting [“Chrysanthemum coronarium” C. coronarium] had a few individuals of [Calendula arvensis] plants. A common morphological feature of the two species is that each inflorescence (Fig. 8.5.10) contains several fruit types (heterocarpy). It is possible that the ants do not succeed in discovering the seed in all the achenes and those disposed of to the threshing zone prove the success of heterocarpy in this respect. 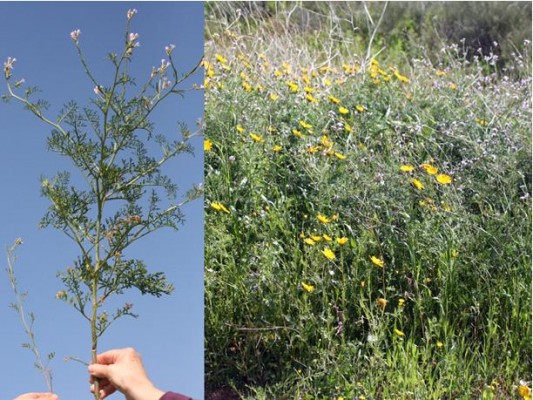 Fig. 8.5.9: An ant nest at the Bnei-Zion nature reserve where the large C. coronarium is accompanied by large Erucaria hispanica (on the right). The response of E. hispanica to growth on fertile soil versus depauperate soil is displayed on the left. 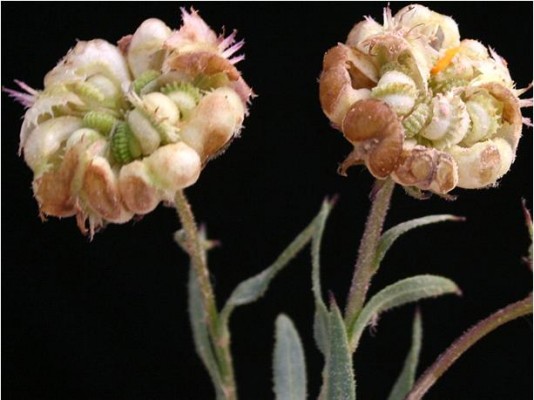 My own point of view is that a plant dispersed by ants using ants’ behavior should be regarded as an “ant plant” (= mirmecophyte), even if it has no oily-body.