The highway between Lahav junction and Beer Sheva is rich in cultivated wheat or barley fields, especially in a winter with sufficient quantity of rainfall. Large areas of cereals are planted in such a year by the Bedouin. In these fields one may observe what looks like piles of dark plants (Figs. 8.2.1-8.2.3). While talking about it with my colleague Imanuel Noy-Meir, he pointed out an article written by Koyumadzisky, Tzaban, and Offer (1967) “The impact of ant nests on soil fertility in areas of natural vegetation”. Ktavim 17: 195-208. After reading it I stopped my car near such a field on my way to or from Beer Sheva, and observed plant growth near and between ant nests. Worker-ants collected seeds of various plants, snails, beetles, and disposed of their remnants as well as the dead ants of the nest.

An area around the nest, which looks like a circle, is referred to in Hebrew as GOREN, meaning – the “threshing zone”. In this area materials not used by the ants accumulate and increase local soil fertility. These fields belong to Bedouin who did not fertilize the soil. Hence, the wheat among the nests suffered from nutrient deficiency, turned yellow, remained small, and their spikes stayed small (Fig. 8.2.4). Near the nest there were large plants, branched, with dark green leaves and stems, and with large spikes. The car driver on the highway thinks that near the ant nests there are round “piles”. This phenomenon began to form an inseparable part of the lectures of the course “Vegetation of Israel”. It was always emphasized during excursions to the northern Negev. In an area planted with wheat nearby, well managed through fertilization, the ant nests are not recognized at all (Fig. 8.2.5). The latter was near “Philips Farm” and became an olive grove. That landscape remains today only in a picture (Fig. 8.2.5). 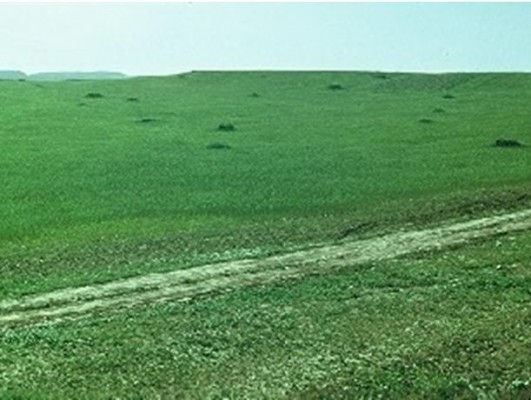 Fig. 8.2.1: A wheat field in the northern Negev, where “piles” are seen; in fact these are large, dark wheat plants that have developed on nests of harvesting ants. 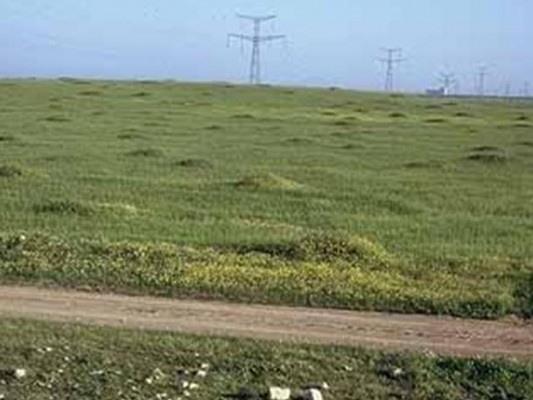 Fig. 8.2.2: A wheat field viewed north of the road leading to Lehavim. Ant nests are prominent due to vigorous growth of wheat plants above the nests. 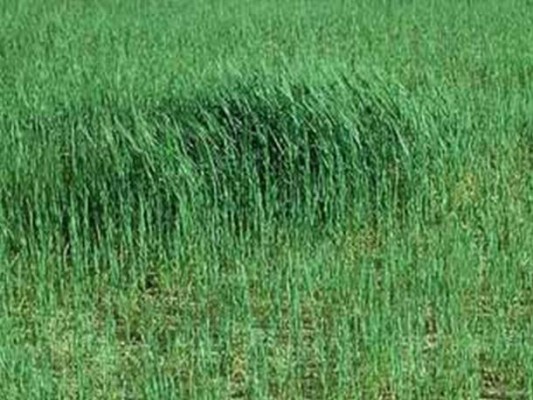 Fig. 8.2.3: Relatively dark wheat plants bear spikes that have developed above nests of harvesting ants. From afar, the group of plants looks like a dark-green “pile” in a light colored wheat field. 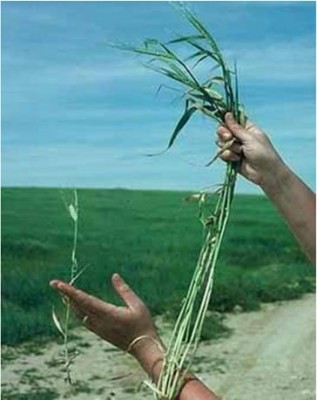 Fig. 8.2.4: Two wheat plants taken from the field in the background. The large dark-green branched plant on the right comes from the threshing zone above an ant nest. The small, depauperate plant with a small spike was collected in the field among the nests. 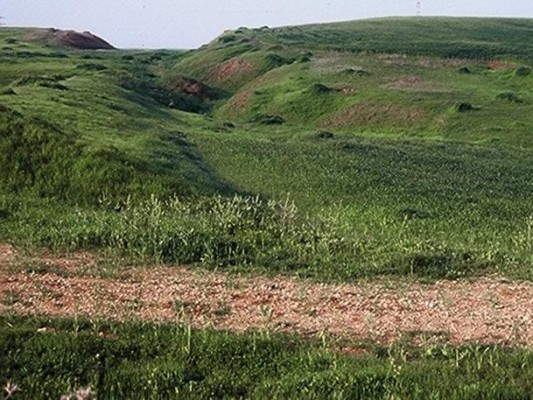 Fig. 8.2.5: Slopes of the long abandoned Ottoman Railway with strong growth of plants above nests of harvesting ants. A wheat field on the upper right of the photo displays the dark color of wheat that is regularly provided with fertilizer and does not suffer from nutrient deficiency. In that location at present there is an olive plantation of Philips Farm.

In the literature of those days there was no indication that there are plants in Israel that prefer ant nests. The impact of these ants and their nest on the soil and its fertility is dealt with in a Ph.D. thesis carried out at Gilat research station (Offer, J. 1980). My friend, the zoologist Prof. Y. Yom-Tov invited me to join him on an excursion to Ramot Yisachar. He studied gazelle life in that area for many years. He looked upon differences in vegetation density near stations of droppings of male gazelles. Our study of the winter of 1989 was published in an international scientific journal. (Danin & Yom Tov.1990. Nests of harvesting ants as primary habitats of Silybum marianum L. Pl. Syst. Evol. 169: 209 217.) Many of the large plants circles could be well interpreted by the activity of Messor semirufus (harvesting ants; Figs. 8.2.6, 8.2.7). The presence of high quantities of [Silybum marianum] near the ant nests (Fig. 8.2.8, 8.2.9) demanded special attention. 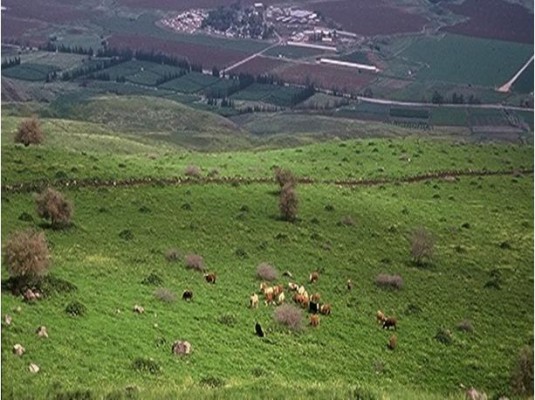 Fig. 8.2.6: A winter view from Ramat Yisachar near Kochav HaYarden eastwards towards the steep slopes descending to the Beit Shean Valley. Nests of harvesting ants stand out due to the growth of plants adapted to this habitat, constructing “piles.” 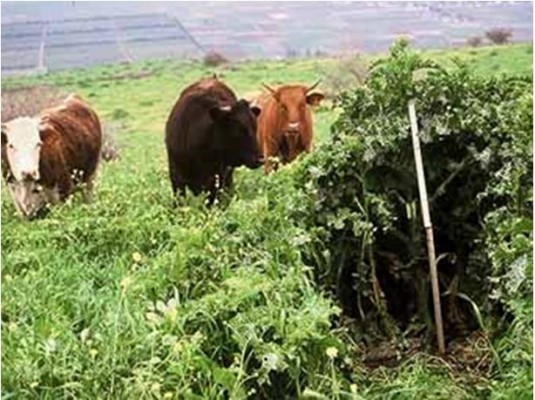 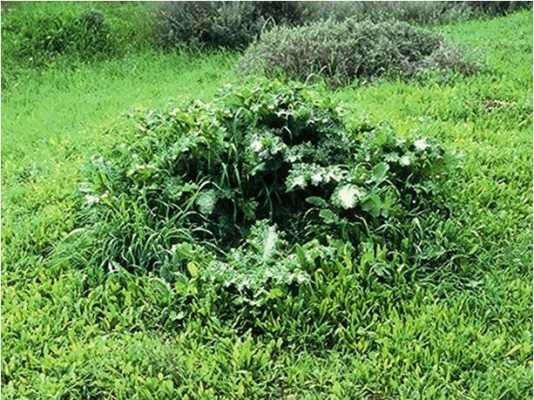 Fig. 8.2.8: A nest of harvesting ants near Sdot Micha, where the growth of Silybum marianum constitutes a circle on the threshing zone of the nest. 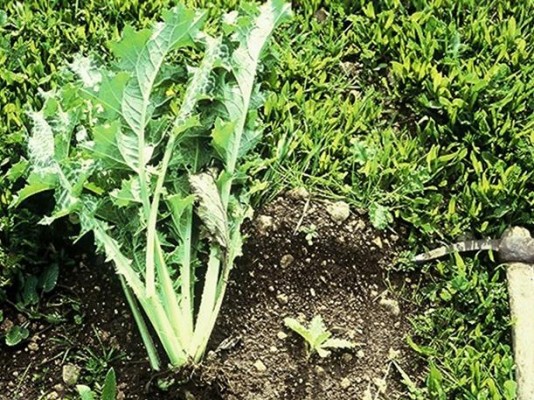 Fig. 8.2.9: Silybum marianum plants from the area of Fig. 8.2.8. The left Silybum specimen developed on an ant nest and the right one on the soil among the nests.