The Fall of a 74 Year-Old Giant

It happened at 7 p.m. on Tuesday January 8, 2013, while strong winds were blowing. Inhabitants of a house in Ma’alot Silman, Bet HaKerem, Jerusalem, were terrified by a loud noise, described later as a possible hit by a rocket. During the following day it became clear that a huge pine tree had fallen on the corner of their red-tiled roof (Fig. 19.1.1-19.1.3). In the afternoon hours they called me, as I own the yard where the pine grew. It was a very healthy tree that had grown well, and we did not think we would witness the end of its life. The weather forecasts during the preceding week predicted winds of 100 kph on that Tuesday. The strong winds pushed over the gigantic tree I was used to seeing near me all my life.

The memories I have of this tree are a kind of local history of a Jerusalemite. Together with the story of the tree falling between the date of my birthday according to the Jewish calendar and that of the Gregorian calendar, there are a few interesting facts. After cutting the trunk (Figs 19.1.3-19.1.6), a cross section was exposed and I could count the annual rings that were revealed (Figs.19.1.7, 19.1.8). It is assumed that each ring in the trunk represents one year in the tree’s life; hence our tree was 74 years old. We may learn about the rhythm of its life by measuring the width of the rings (Fig. 19.1.9). Wide rings that are close to the average of the whole tree may be regarded as “regular years”, and narrow rings testify to harsh years, mostly dry ones. Credit for an additional explanation about annual rings presented here, must be given to our friend in Switzerland – Walter Naenny, who made thin cross sections and photographed them with his microscopes. 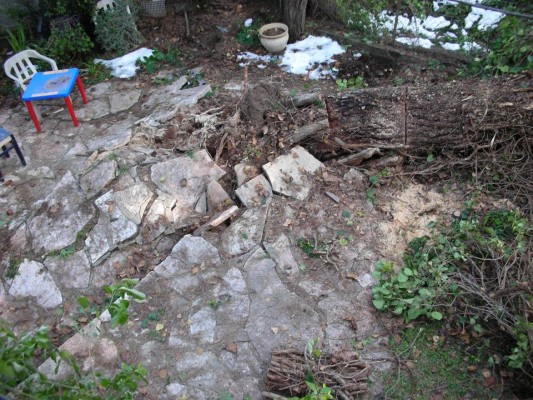 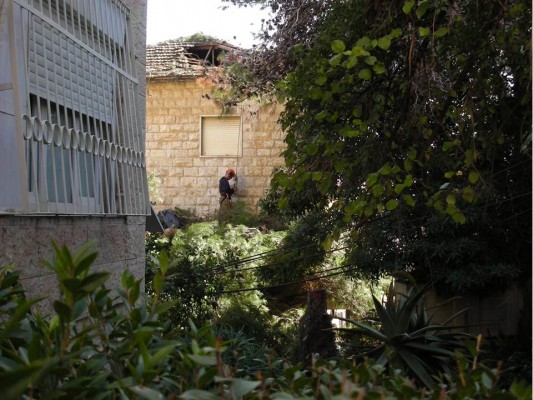 Fig. 19.1.2: The top of our tree canopy broke the red-tiles roof of our neighbour’s house 22 m away from the roots. 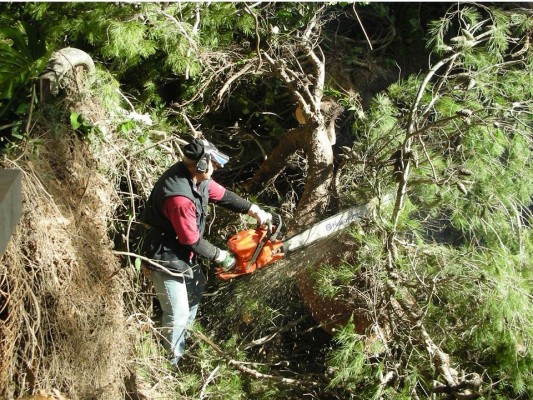 Fig. 19.1.3: Yankale from Efrata and his team cut the plenty lateral branches. 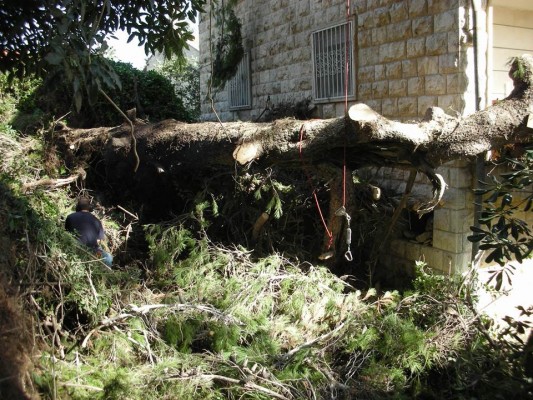 Fig. 19.1.4: The huge trunk waited in the area between the two buildings. 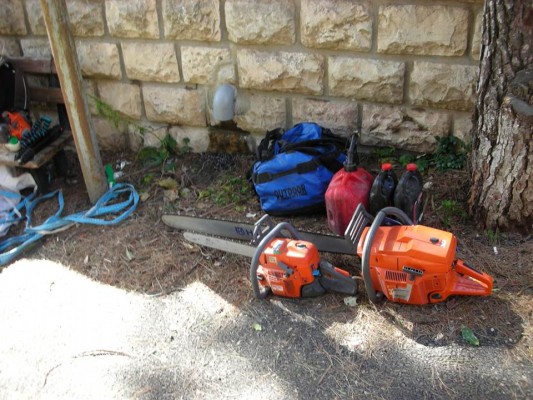 Fig. 19.1.5: Mechanical saws of various types were brought for the cutting mission. 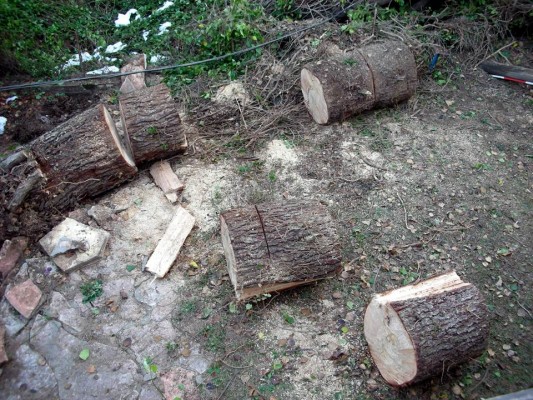 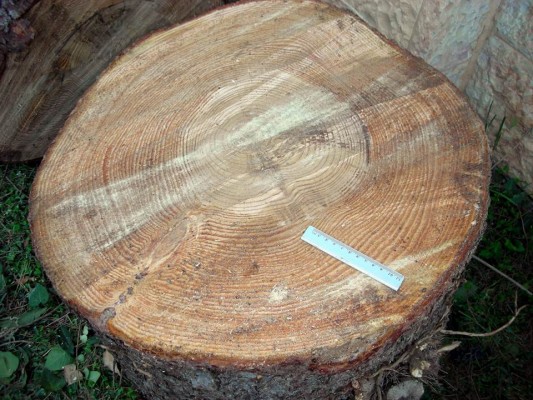 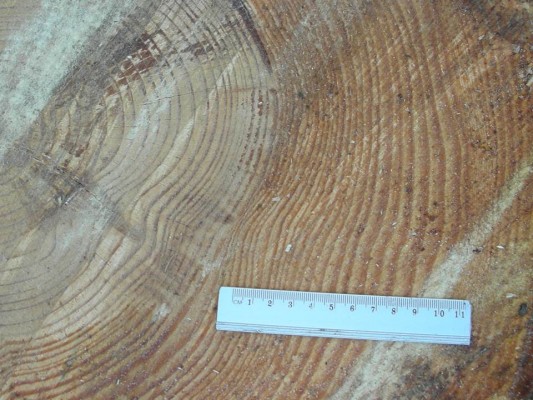 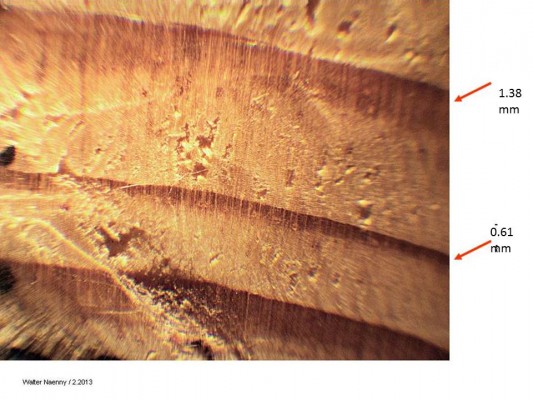 There were a few pine trees at the eastern boundary of our yard. As a small child, I remember trying to roll a big stone near that big tree. Yehi’am Weitz, our neighbor, helped me in that endeavor – he was strong and was killed in action in the “Bridges Night” near Nahal Kziv in 1946. I hid behind the big tree many times when playing childhood games. One of the neighbors of our giant pine was a [Pinus canariensis] tree at the margins of Weitz family yard. Yosef Weitz was the head of the forestry department of the Jewish National Fund; the tree near our yard was one of the first Canary pines in the country. At the foot of the tree we discovered its winged seeds, much larger than those of the Jerusalem pine. We were use to eating Jerusalem pine seeds with their thin shell; the seed coat of the Canary pine is thicker than that of the former and after shelling it, the seed inside was considered a delicacy.

In 1948, a shell landed in the small pine wood by the yard of our neighbors, the Wager family. The pines immediately caught fire and many adults were involved in extinguishing the blaze while the children were moved a safe distance away. I heard the noise of the burning very well and it remained as one of the childhood events that are not erased from the adult brain. On another occasion, another shell fell on a cypress ([Cupressus sempervirens]) tree that was part of the connecting hedge we had with the Wager’s yard. One of the fragments of this shell penetrated my parents’ bedroom wall while they were out of the house.

During 1948, I went with my brother for a bicycle ride to HeKhaluts street below our neighbor’s house. While descending toward that street we heard the noise of artillery shells shot from Nebi Samuel. We hid behind one of the large pine trees growing near the path. Following the characteristic sound of an approaching shell, it exploded at the foot of the large eucalyptus tree at the junction of Bet HaKerem- and HaMoreh Street. A sharp fragment of that shell jumped gently on the steps of the pedestrian path, making a special noise, and landed near our hiding place. I wanted to indicate that this fragment was mine (we collected such things), so I took it in my hand and put it into my trouser pocket. Being very hot, the fragment burnt its way through and fell to the ground. The next fragment that arrived close to me was during the Yom Kippur war. This time I waited until the fragment cooled before picking it up as a souvenir.