Most [“Pistacia atlantica” P. atlantica] I saw in Sinai grew in central and northern Sinai in wadis. In eastern Sinai, some 50 km west of Elat, in the vicinity of Gebel Shaira, there are wadis carrying the Pistacia (=butum) name and I saw a few trees there. There are not many individuals and they are confined to wadis of the second to fifth order. This is also the situation in the mountain range that encloses central Sinai, towards the Gulf of Suez. Gebel Giddi and Gebel Sahaba are parts of this range and lonely [“Pistacia atlantica” P. atlantica] trees occur in wadis of the limestone mountains.

The position of [“Pistacia atlantica” P. atlantica] in Edom is more prominent. Large trees with spectacular trunks occur in the transition zone between the steep slopes facing west and the plateau along the highway east and south of Petra. There are large trees near limestone outcrops. There are scattered trees in the maquis developed on hard sandstone outcrops. In this area the principal tree is [Juniperus phoenicea] which is accompanied by [“Pistacia atlantica” P. atlantica], [“Pistacia palaestina” P. palaestina], and P. khinjuk. It is hard to specify a habitat for each of the three species.

Annual rings – a means of checking up tree age

Species of the genus Pistacia have a special type of cambial activity which is determined by Prof. A. Fahn in his “Plant Anatomy” book as “ring porous”. This term means that in spring, when the tree starts its activity, the cambium creates vessels with a large diameter and a thin wall. These function in the efficient transfer of water from the roots to the above-ground canopy. Later, during the summer, vessels with a narrow diameter are formed and when next year’s spring arrives, vessels with a large diameter are formed again. Thus, the spring is recognized (Fig. 7.5.1) by a ring of large pores. The interval between two such rings is the “crop” of one year by the parameter of xylem formation.

During a rainy year the cambium is active during a long season and the ring is wide, whereas in a dry year a narrow ring is produced. The range of ring widths is rather wide. Individuals developing in crevices are small ([usefulplantsg4 Figs. 7.4.1-7.4.2]) and may have an average ring of 0.1 mm per year whereas the same value for trees growing in wide wadis may have rings 2-3 mm wide. The age of a [Pistacia] tree can be estimated by checking the average annual “crop” of xylem creation in several transects in its trunk. The cross-section in Fig. 7.5.1 was taken from the stem of a tree planted in Jerusalem. The transition between the white xylem and the dark bark represents the last days of November 2008. The line of holes below this line was formed in spring 2008, and also in the spring of 2007.

We stayed in the shade of a large tree on a summer day (Fig. 7.5.2) south-west of Hemet Cistern. The tree had a big lateral branch that had broken naturally. The circumference of the trunk at my chest height was measured in the field as 340 cm. With my pocket saw I removed a 10 cm piece of the dead trunk along the radial direction. There were 12 annual rings in this piece. The circumference (according to the classical geometrical equation) is: 2 X radius X 3.14. Therefore, the radius of the living trunk is estimated as 54 cm, and the age estimated roughly as 700 years. It is evident that if we wish to remove the “roughly” from the age estimation a few more transects should be made. However, for the purposes of my excursion with the members of “Boustan” group (Fig. 7.5.2), the rough age estimation was sufficient. An in-depth age analysis should be coordinated with the Nature Reserves Authority.

In my in-depth analysis, done for the preparation of our 1970 article we found trees 3 to 1000 years old. Dendrochronologists (in Greek: dendros = trees; chronos = time) make core borings in trunks and obtain cores parallel to the radius of trees. Age analysis made by Prof. Y. Felix and his colleagues by core analysis of the tree near the parking lot of En Ovdat reserve, showed that the tree is ca. 300 years old. 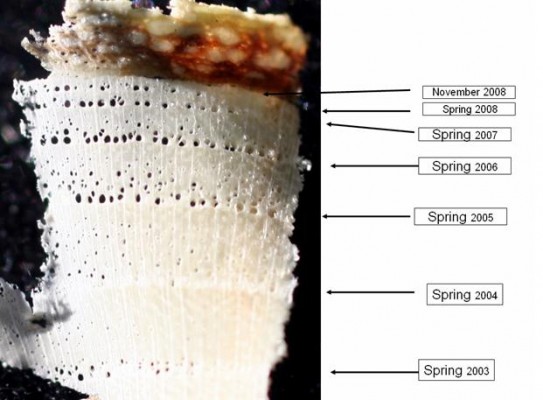 Fig. 7.5.1: A thin cross section in a branch of P. atlantica. The large holes, arranged in rows, are in vessels that were created in the spring of the years listed alongside the photo. The holes are arranged in rings and this gave the name to the “ring porous” type of the xylem of this species. The length of the white xylem between the years 2003 and 2008 is 7 mm and one may estimate the age of the tree when the number of rings per radius length unit is counted. 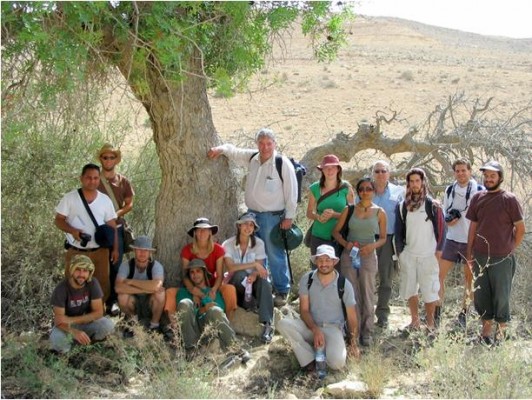 Fig. 7.5.2: Members of “Bustan” in the shade of a tree about 700 years old, at the upper Nahal Nizanna. The age was estimated by measuring the tree circumference; a piece of a dead trunk taken from a branch of the main branch. The basic assumption is that there is a close affiliation between the local moisture regime and the tree’s rate of development.