More on Pistacia atlantica in the Negev Highlands

Seedlings and their habitats

The ability to sustain tree seedlings in the desert derives from the fact that a rain shower of 1 mm may cause run-offs, water that may fill up soil pockets or soil at the foot of rock outcrops. The [Pistacia] seeds are eaten by birds that transfer the non-digested seeds and excrete them in their living environment. Here is where a seed may germinate and send roots to soil pockets carrying sufficient water for its establishment. There are not so many appropriate soil pockets in the Negev Highlands and this is the reason for the rare occurrence of such seedlings. The number of individuals from the same age group in this species is smaller than in plants with fewer limitations of germination and establishment. An additional habitat where many seedlings were found is water courses at the Negev Highlands where many trees occur ([useful_plants_g3 Fig. 456]).

In a detailed study I carried out with Dr. Yoav Avni of the research institute at the “Ramon Science Center” and the Geological Institute, we found young plants of [“Pistacia atlantica” P. atlantica] in watercourses of all the “orders” – from 1 through 5. Seeds germinate and seedlings establish themselves in watercourses where there are short events of temporary high water availability from time to time. There is a biological advantage for trees that develop deep roots and survive many years after the rain that brought about their germination. The [Pistacia] may survive for as long as several hundred years. During such a period erosion caused in the alluvium may lead to changes in the local topography and trees may be seen high up on old terraces of [http://flora.huji.ac.il/browse.asp?action=specie&specie=PISATL&fileid=8568 such wadis]. 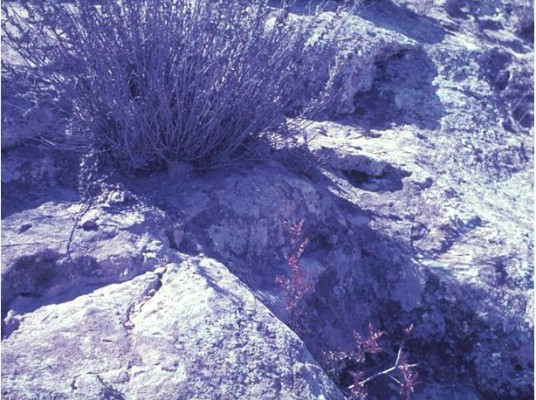 Fig. 7.4.1: A seedling of Pistacia atalantica with a shrub of Chiliadenus iphionoides in a smooth-faced rock outcrop covered with epilithic lichens. 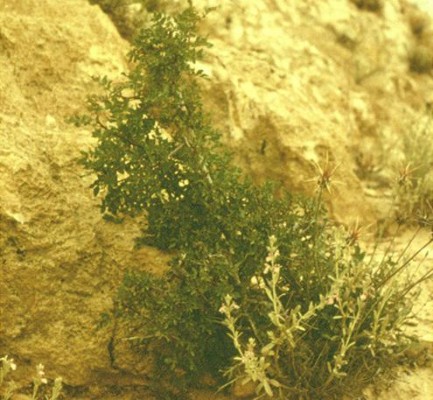 Fig. 7.4.2: A seedling of Pistacia atalantica with a shrub of Stachys aegyptiaca on the step of a cliff near Nahal Elot. 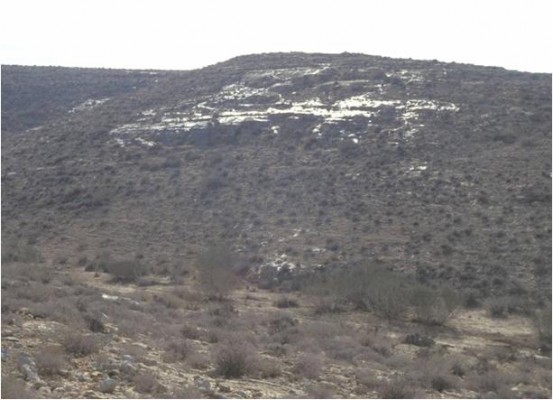 Fig. 7.4.3: A smooth-faced rock outcrop covered with epilithic lichens a short while after a light rain shower. The gleaming rock results from run-off water from the rock surface.

Trees that germinated and became established in smooth-faced rock outcrops, and have roots that penetrate to moist layers, develop into trees such as those in Figs. 7.4.4 and 7.4.5. A large tree in fall is seen on the rocky slope to the right of the shrubs growing in the wadi (Fig. 7.4.6). A closer view of this tree displays its ability to break the supporting rocks when growing up and expanding. The shrubs in the wadi are seven individuals of [Amygdalus ramonensis], an endemic tree of the Negev Highlands. It is rare, but may be found growing in rocks and low-order water courses (Figs. 7.4.6 and 7.4.8), and in larger wadis (Fig. 7.4.9). The location of the [Pistacia] tree closest to the local water-divide of the mountains depends on the nature of rock at the local catchment area.

An area that contributes water efficiently is expected to be smaller than an area of fissured limestone. While counting 1,400 trees using aerial photographs, 7 trees that have rocky catchment areas, were found to have an average area of 1,500 m2. Nine other trees, growing at the foot of slopes with fissured rocks, had an average catchment area 250,000 m2 (Fig. 7.4.10). A few [Pistacia] trees die when their time comes (Fig. 7.4.11). In a few of them beetle caterpillars were found in the trunk, and these attack the trees as part of their life cycle. Attempts to show that human activity caused the death of these trees did not convince me. I see the population of [“Pistacia atlantica” P. atlantica] in the Negev Highlands as a natural population with germination of new plants, growth of adult trees (Figs. 7.4.12-7.4.14), and death of old trees or others that are affected by various insects. 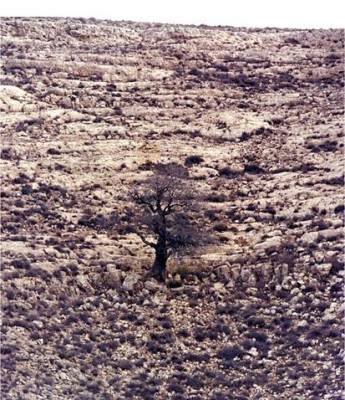 Fig. 7.4.4: A large Pistacia tree that developed at the foot of a surface rich in smooth-faced outcrops and enjoys large quantities of run-off water. 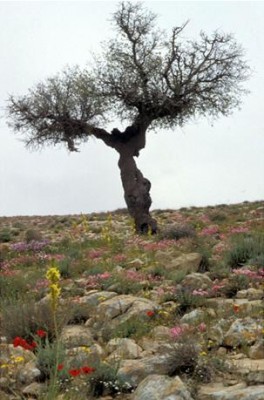 Fig. 7.4.5: A Pistacia atlantica tree that developed in a rocky landscape where the accumulation of large quantities of run-off water at the rhizosphere enables it to keep going for hundreds of years surrounded by shrub-steppe. 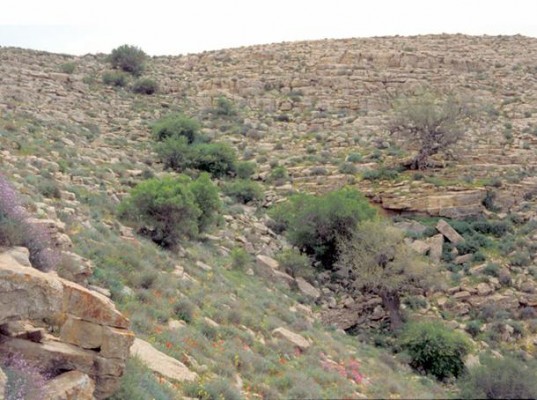 Fig. 7.4.6: A tributary of Nahal Elot facing north and supporting 7 shrubs of Amygdalus ramonensis. A large P. atlantica tree grows on the slope to the right of the tributary there. 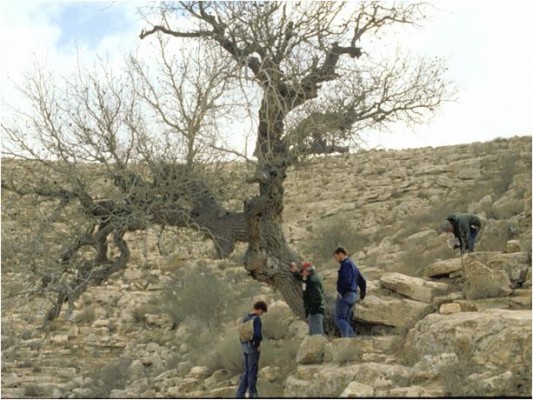 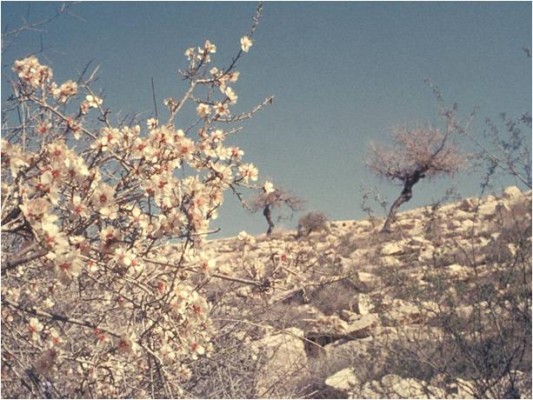 Fig. 7.4.8: Amygdalus ramonensis blooming in the catchment area of Nahal Elot. At a point higher along the slope there are two leafless Pistacia trees. 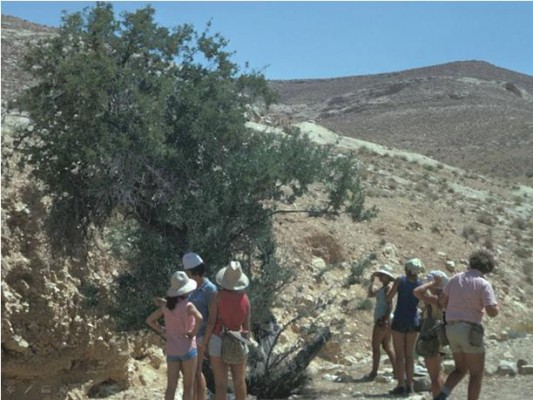 Fig. 7.4.9: A tree-sized Amygdalus ramonensis at Nahal Eliav. This tree was selected as the type specimen by which this plant, endemic (exclusive) to the Negev, is described. 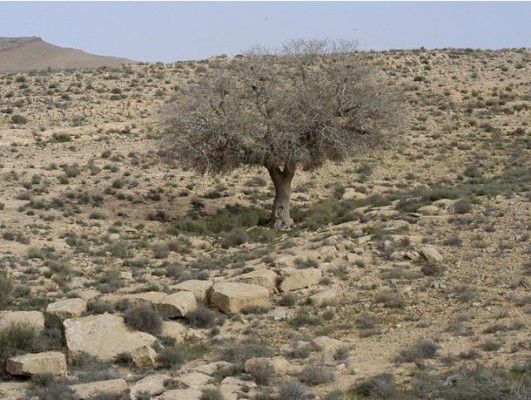 Fig. 7.4.10: A P. atlantica tree in a first order tributary of Nahal Nitzanna between Hemet Cistern and Mt. Ramon. 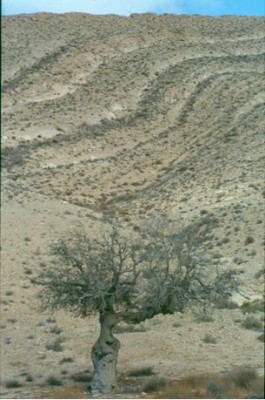 Fig. 7.4.11: A tree several hundred years old in a third order tributary, that died after being infested by insect caterpillars in its trunk. 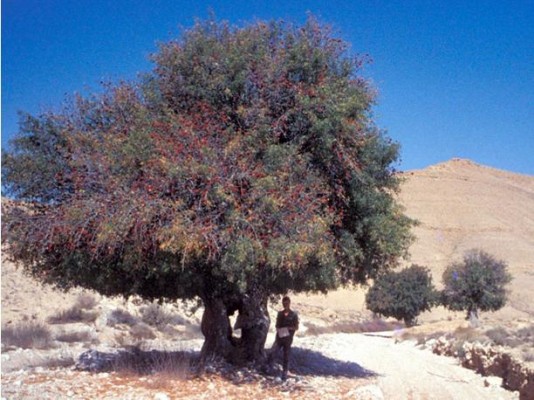 Fig. 7.4.12: A well developed old tree in a fourth to fifth order tributary of Nahal Loz. The tree is highly infected by red galls. 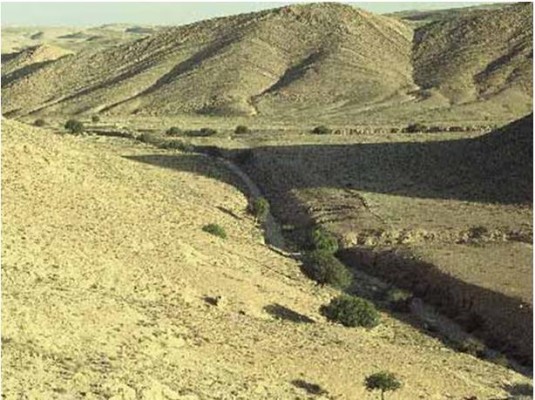 Fig. 7.4.13: Nahal Loz with dozens of P. atlantica trees growing on its banks. 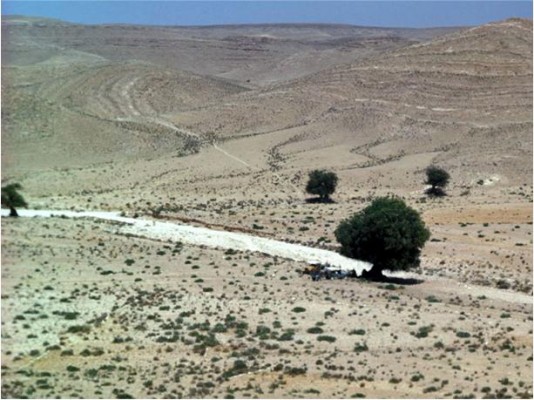