Pistacia atlantica and its Huge Trees in the Negev Highlands

The wanderer in the desert cannot look at a tree without deep appreciation. Trees have deep roots and even in dry seasons continue to be green and stay active during the summer. Trees provide comfortable refuge for the visitor and for the long-time resident of the area. When looking at Nahal Elot from the cliffs above it (Fig. 7.3.1), the viewer sees an almost mirage-like landscape. The trees growing along Nahal Elot are accompanied by dense small shrubs that follow the geological map of the area. In fact, the shrub density varies according to the moisture regime that every kind of substratum offers, thus emphasizing the geological setup of the area. When the visitor finds a shelter even for lunch preparation in the shade of an old [“Pistacia atlantica” P. atlantica] tree at Nahal Loz (Fig. 7.3.2), he may feel as if he has arrived in a legendary country. During a study of [“Pistacia atlantica” P. atlantica] tree distribution I carried out in the Negev, I marked on aerial photographs all the adult trees I could see. Some 1400 trees were found. I marked the 1 x 1 km squares of the Negev Highlands according to the tree density (Fig. 7.3.3). The highest tree density is in the high part of the area, near Mt. Ramon, where a layer of hard limestone from the Nizanna Formation creates smooth-faced outcrops. 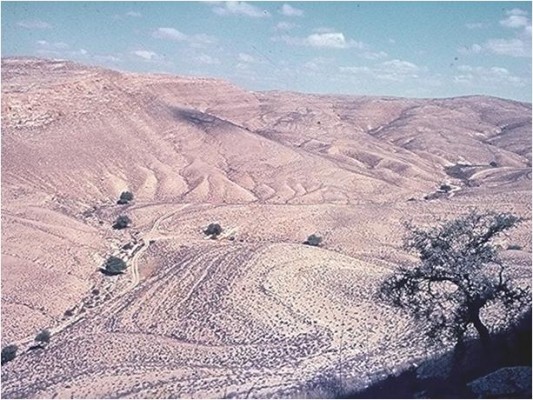 Fig. 7.3.1: Nahal Elot, the Negev Highlands, where Pistacia tree density is of the highest in the Negev. The local moisture regime is evidenced by the shrub density. 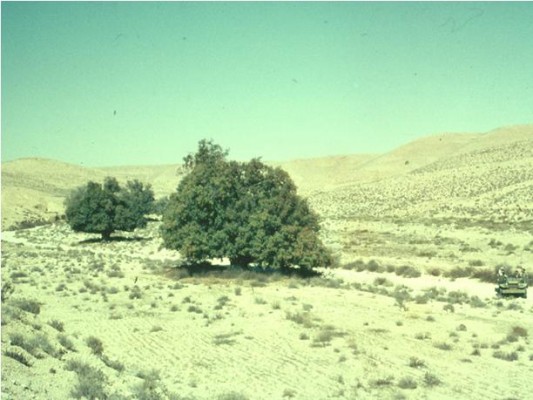 Fig. 7.3.2: Large trees of Pistacia, even on a country-wide scale, develop in large wadis and provide a refuge for visitors. 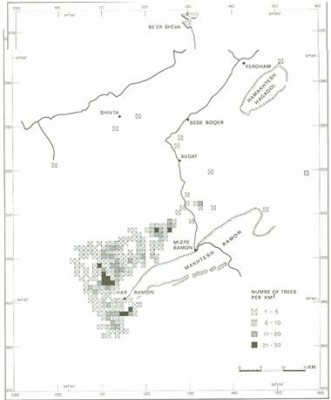 Leaf structure and species recognition in the genus [Pistacia]

The tip of [“Pistacia palaestina” P. palaestina] leaflet tapers to a sharp point, and the leaf axis is round. [“Pistacia atlantica” P. atlantica] leaflet has a rounded tip and the leaf axis has lamina strips of a few millimeters wide in its both sides, making the axis not round (Fig. 7.3.5). P. khinjuk grows in rocks and wadis in southern Sinai and in Edom, Jordan (Fig. 7.3.6). Like the other two, it is a deciduous tree and like [“Pistacia palaestina” P. palaestina], its leaflets are acuminate (narrowing tip) and the leaf axis is round. However, like [“Pistacia atlantica” P. atlantica], the leaf has an uneven number of leaflets as the leaf axis terminates in a large leaflet (Fig. 7.3.6). Young branches of the three species carry leaflets with a-typical shape which may differ from what is presented here for the mature leaves. In conclusion – mature branches have to be checked (Fig. 7.3.7). 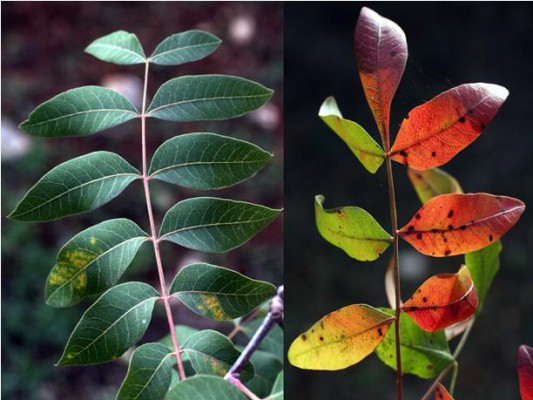 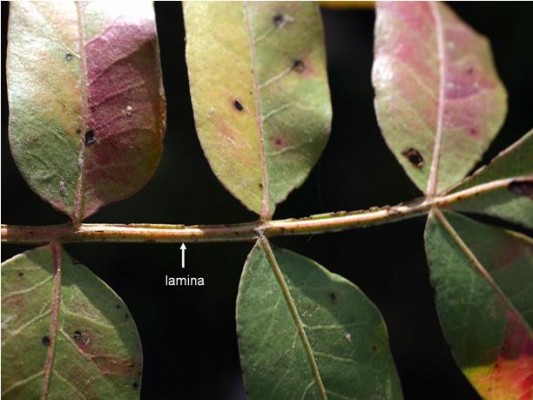 Fig. 7.3.5: A glossy leaf of Pistacia atlantica. The additional lamina at both sides of the leaf axis give it a wider appearance. 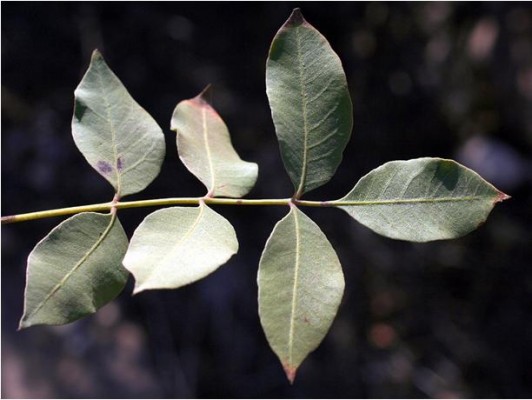 Fig. 7.3.6: A Pistacia khinjuk leaf with a large leaflet at the tip of the rounded leaf axis; leaflets with a pointed tip. 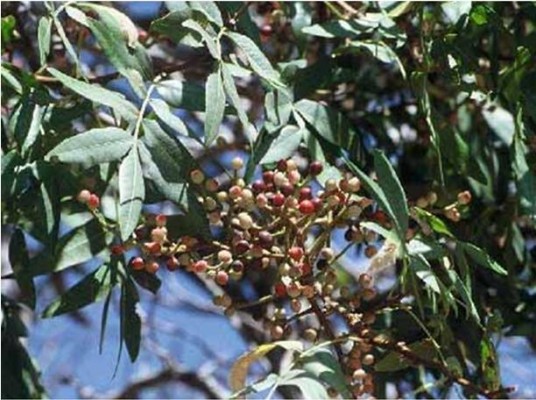 Fruit types are often used to differentiate tree species. Only female individuals of the genus [Pistacia] carry fruits (= dioecious; Fig. 7.3.8). They are red when young, turning turquoise after a successful pollination takes place. When the thin skin is removed the thin but hard brownish stone is reached. When the seed is opened, its green food reservoir is seen. In color it resembles the seed inside the pistachio nut. The latter is known in the Middle East as “Fistuk Shami” (after Damascus = Sham in Arabic), or “Fistuk Khalabi” (after Khaleb = Aleppo). The common name in Arabic for three of the species known in our area is “butum”. This name has preserved the ancient Talmudic name “botnim” or “botnah”. The scientific name Pistacia is also a derivative of a vernacular name. In an excursion to Iran, in 1965, I often heard the local name “pistae” for the fruit of the cultivar Pistacia vera (pistachio nuts). 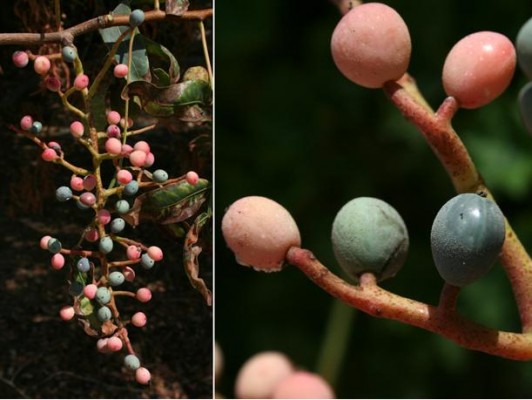 The fruits of the wild trees, that remain red while the others turn turquoise, are empty; their seed did not develop. The fruits of [“Pistacia atlantica” P. atlantica] and [“Pistacia palaestina” P. palaestina] are collected in the autumn and sold in the spice shops in markets all over Israel. They are used after being pulverized, and their powder serves as a condiment for very sweet and special cakes. The fruits are small, 5-6 mm in diameter and carried in racemes (Fig. 7.3.10 left). Stems of many [“Pistacia atlantica” P. atlantica] trees carry galls which look from afar like red balls 5-6 cm in diameter (Fig. 7.3.10 right), which become black in winter and remain like that during most of the year. In close-up (Fig. 7.3.11) the gall looks like a coral. When a branch of the gall is opened (Fig. 7.3.12) it is seen to be hollow and typical aphids are often seen there. Following a long evolutionary time of the parasite aphids and their [Pistacia] host, the plant produces typical galls that are the microhabitat in which the parasitic aphids develop. The galls are a useful tool for determining the [Pistacia] species. If you wish to compare with the galls of [“Pistacia palaestina” P. palaestina], please use the link: [http://flora.huji.ac.il/?action=specie&specie=PISPAL]. 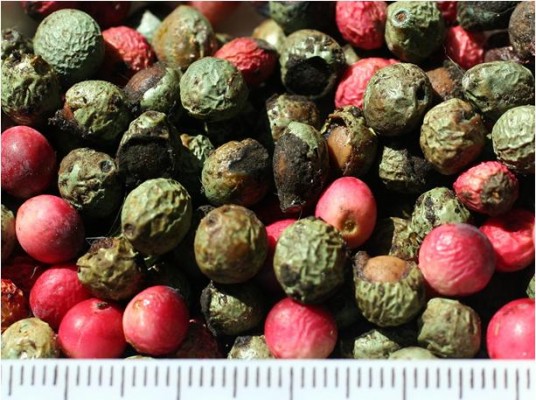 Fig. 7.3.9: Fruits ready for sale when collected during October through December. Drying the fruits properly after collection enables the spice sellers in the market of Old Jerusalem to sell them throughout the year. The ground fruits are used as a spice for special sweet cookies and cakes. 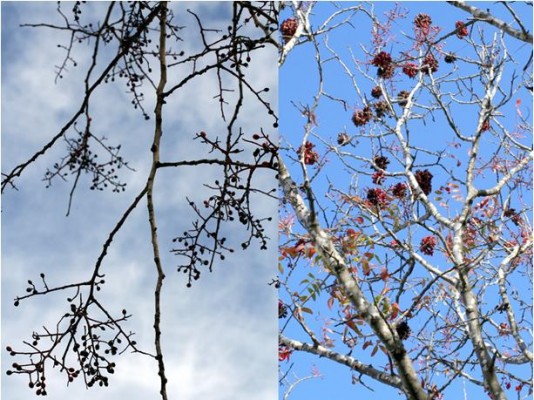 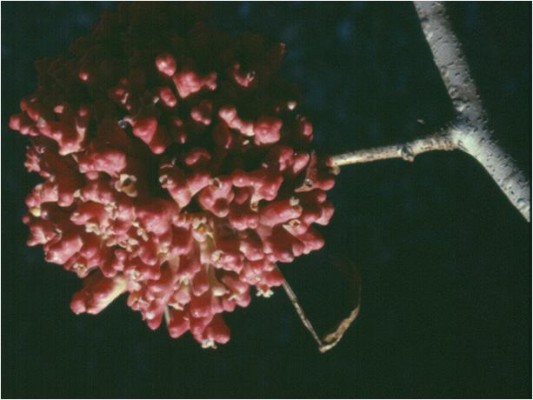 Fig. 7.3.11: A typical globular gall of Pistacia atlantica – the tree may be determined with certainty, by these galls. It starts developing green, becomes red, and turns black upon drying out. 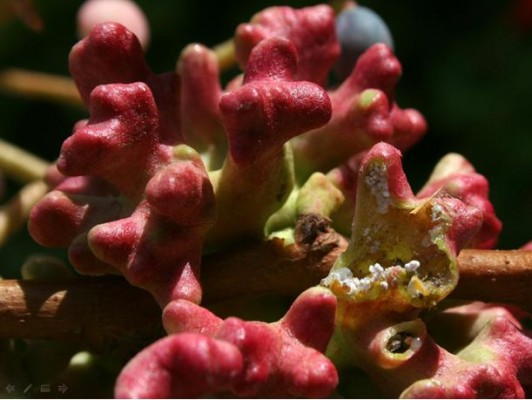 Fig. 7.3.12: The arms of the “corals” are hollow and specific aphids confined to Pistacia atalantica develop inside them.