Weathering Patterns from the Distant Past; Nari with Rhamnus lycioides and Pistacia lentiscus

Weathering Patterns from the Distant Past

Nari rocks near Sdot Micha carry on their south-facing parts evidence of biogenic weathering that took place under a much more arid climate than that of the present. Weathering patterns of pits and channels typical of deserts are [usefulplantsf6 presented in Figs. 18.1.10 and 18.1.11]. They testify to a long period of ca. 100 mm mean annual rainfall (it is 400 mm there at present).When the climate became moister, denser vegetation developed, trapping air-borne dust, and a soil-protecting layer developed. Being covered, the desert weathering patterns survived to the present day. Destruction of the maquis vegetation brought about soil erosion leading to the exposure of the desert weathering patterns. Dark microorganisms covered the rock. A white band of newly exposed Nari is prominent in Fig. 18.1.11. Some of the weathering depressions of the past function as sites suitable for the establishment of plants discussed here (Fig. 18.1.12). 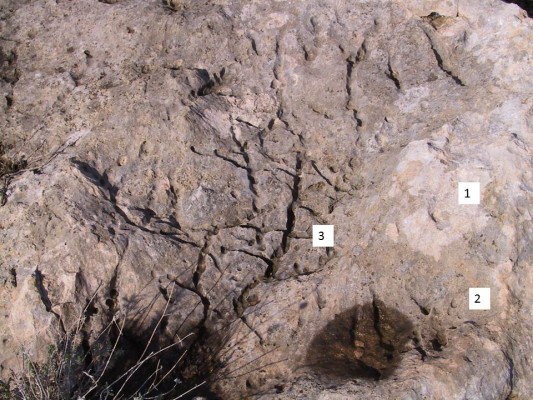 Fig. 18.1.10: A rock that underwent weathering processes in desert conditions in the remote past. 1. Gray endolithic lichens populating parts of the rock that have been exposed for a long time, 2. Part of the rock that was exposed to microbial activity later and became populated with pioneer cyanophilous lichens which will be replaced by endolithic lichens in the future, 3. Rock surface with pits and channels that were formed long ago by desert climate 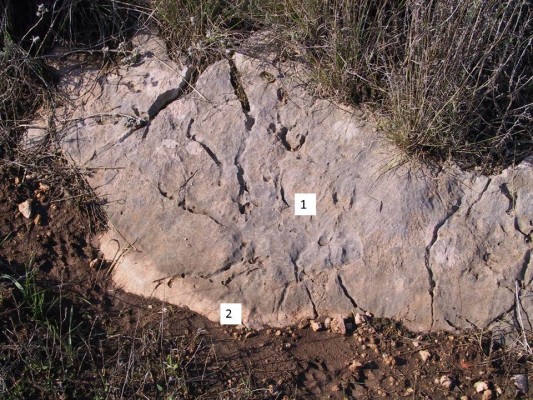 Fig. 18.1.11: A rock that underwent weathering processes in desert conditions in the remote past. 1. The rock weathered under a desert climate in the remote past and became exposed to microbial activity rather late; it then became populated with cyanophilous lichens which will be replaced by endolithic lichens in the future, 2. Rock surface that was covered with soil, exposed recently and has not yet become populated by microorganisms 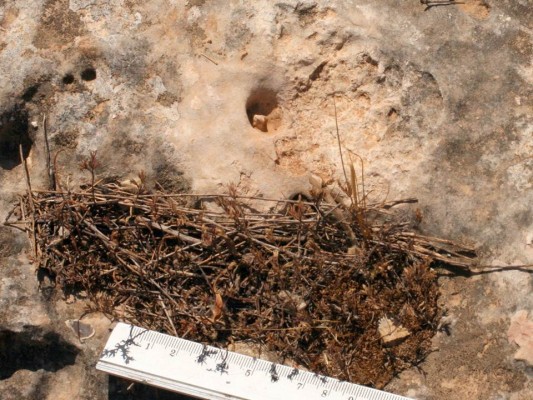 Fig. 18.1.12: A depression in a Nari rock populated by mosses that trapped dust and support a few annuals on the soil they formed

The water-holding capacity of the rock layers below the crust is high, and when exposed, in depressions, supports mosses (Figs. 18.1.6, 18.1.12-18.1.15). These trap dust and together with their dead parts form a kind of humus. Water passing through this medium becomes a more efficient dissolving agent than the rain water. The depressions with mosses become deeper and larger and reach a point at which water reservoirs in the depression enable a successful growth of annual plants (Figs. 18.1.12-18.1.16). As the volume of the depression grows (Fig. 18.1.17), additional species and individuals of annual plants may develop. As time passes, perennial plants establish themselves in the existing depressions. [Micromeria myrtifolia] is one of these pioneer rock plants (Fig. 18.1.18). Rock dissolution by plants such as M. myrtifolia extends the size of the free rhizosphere in the upper Nari and plant species diversity increases; examples are [Chiliadenus iphionoides], [Hyparrhenia hirta], and [Narcissus tazetta] (Fig. 18.1.19). Establishment of several H. hirta plants in several depressions is possible as well (Fig. 18.1.20). [Chiliadenus iphionoides] (Figs. 18.1.21, 18.1.22) is a typical rock plant (lithophyte) that may germinate in small depressions and rock crevices, sending roots into the rock, penetrating deeply and dissolving rock parts that are in contact with the roots. It thus prepares micro-habitats that are suitable for its companions. The vegetation class of the rocks in Israel and surrounding countries is named after C. iphionoides (Danin & Orshan, 1999). Old Nari outcrops support additional lithophytes near C. iphionoides. Such as: [Majorana syriaca] (Fig. 18.1.23), [Micromeria fruticosa] (Figs. 18.1.24, 18.1.25), Stachys palaestina(Fig. 18.1.26), and Teucrium capitatum (Fig. 18.1.27). 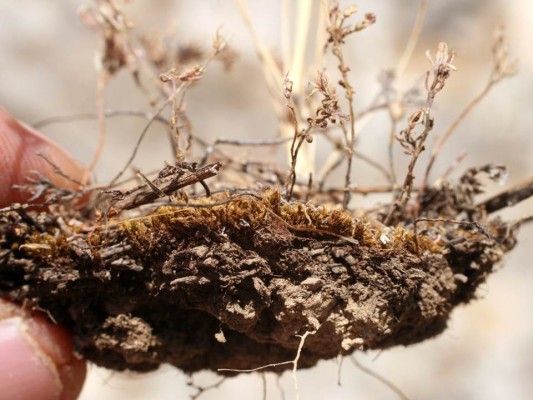 Fig. 18.1.13: A depression filled with mosses, a prominent soil layer, a yellowish moss layer, and remnants of the annual plants 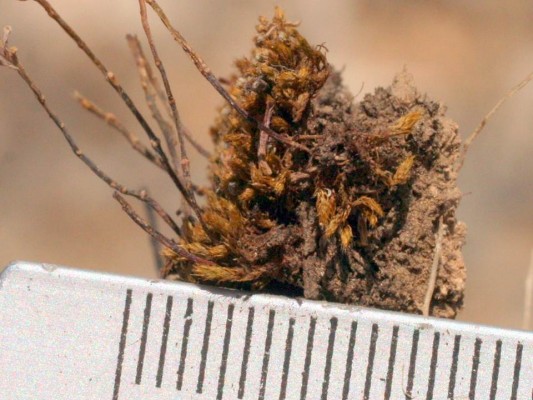 Fig. 18.1.14: A close-up of the moss stems with tiny scaly leaves. One minute after moistening, the leaves stretch and become green 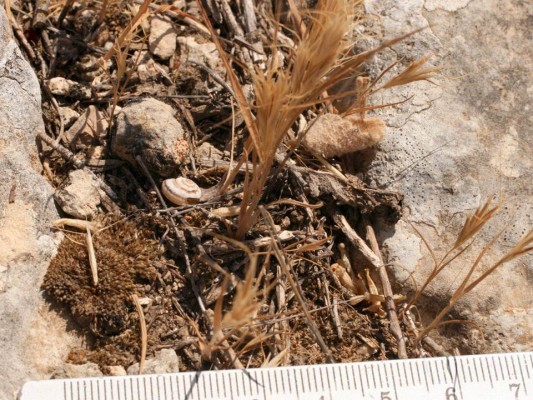 Fig. 18.1.15: Soil in a depression with mosses and remnants of Bromus fasciculatus 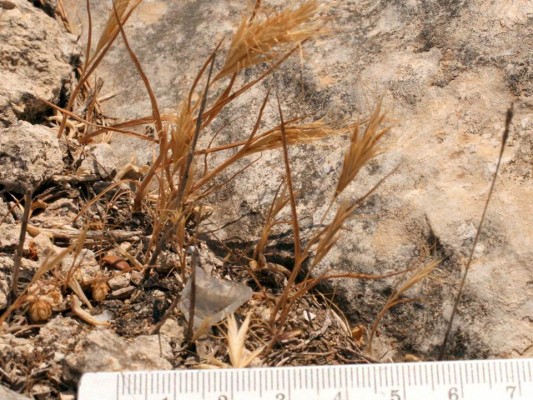 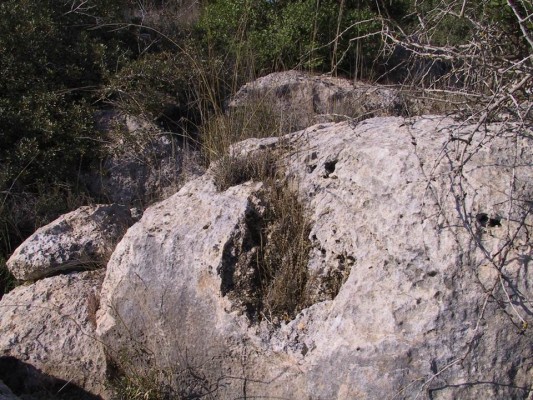 Fig. 18.1.17: A large soil pocket in a Nari rock with annuals and Micromeria myrtifolia 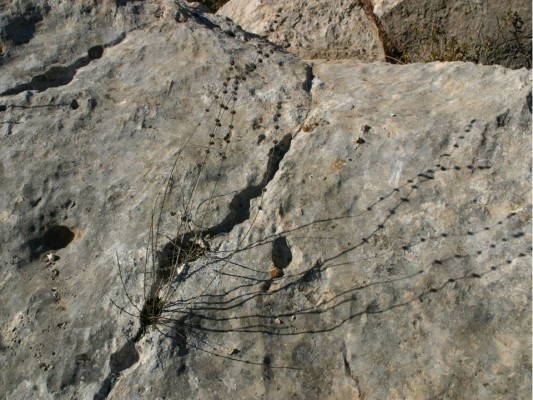 Fig. 18.1.18: Micromeria myrtifolia that developed in a desert weathering channel 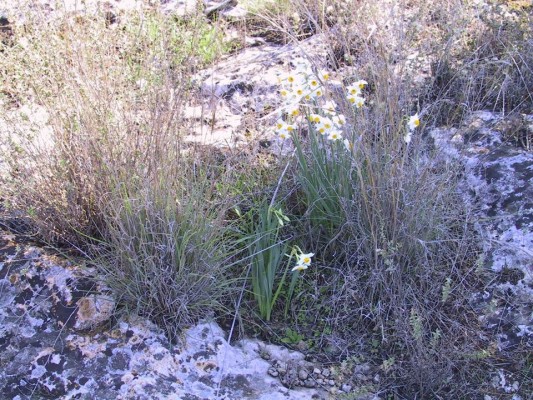 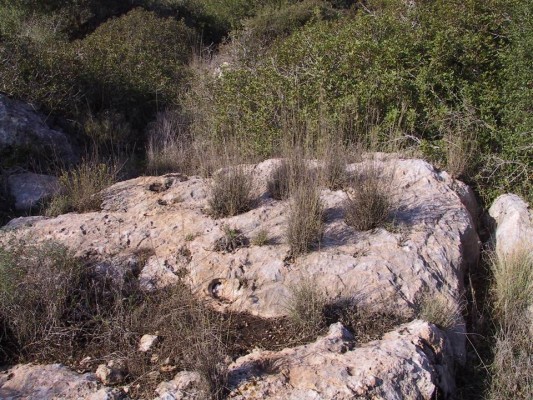 Fig. 18.1.20: A Nari rock with a few Hyparrhenia hirta in soil pockets 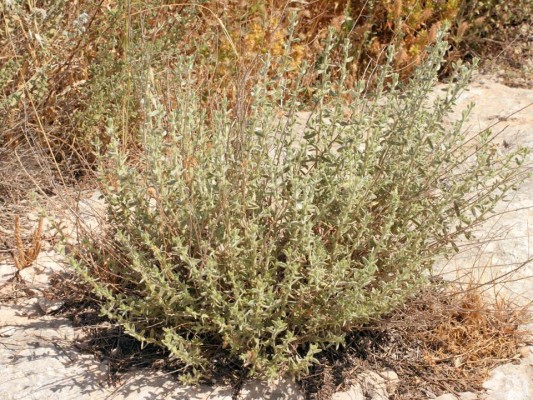 Fig. 18.1.21: Chiliadenus iphionoides – a typical rock plant; the vegetation class of the rocks in Israel is named after this plant 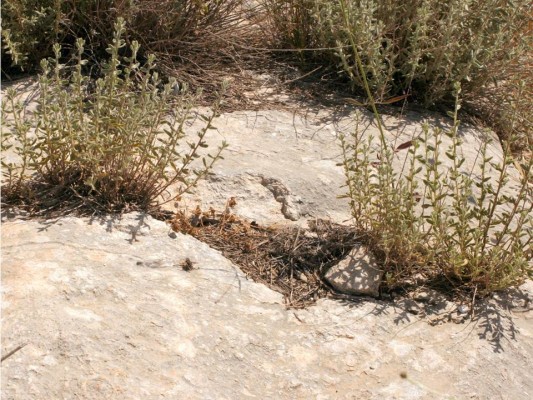 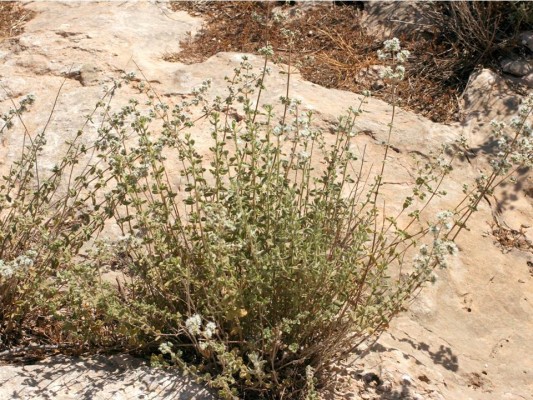 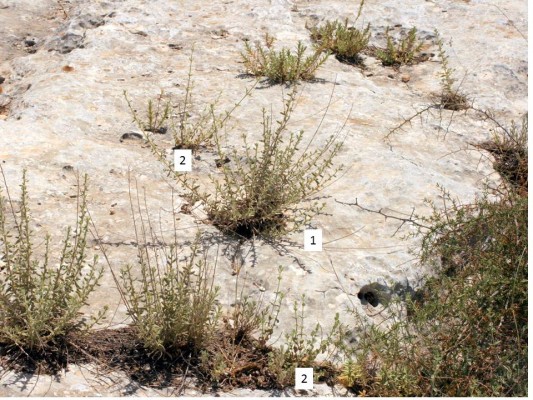 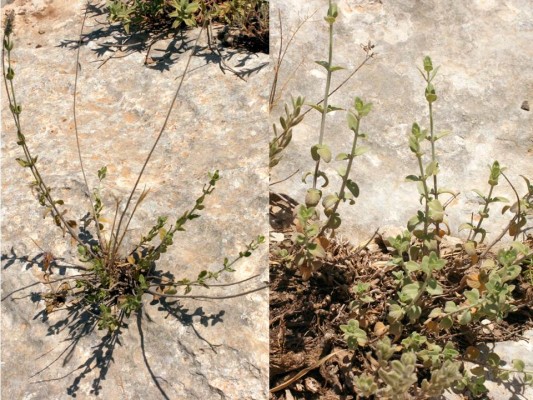 Fig. 18.1.25: Micromeria fruticosa – confined to rocks in the Mediterranean part of Israel 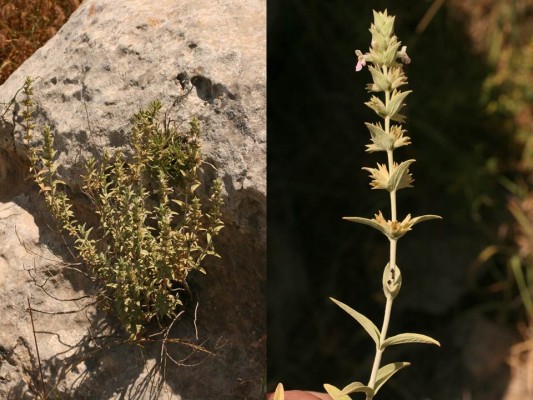 Fig. 18.1.26: Stachys palaestina – a typical rock plant in the Mediterranean part of Israel 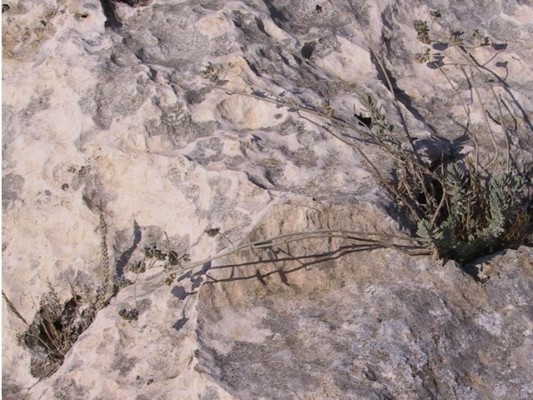 Fig. 18.1.27: Teucrium capitatum in a crevice or soil pocket on the right and a small soil pocket supporting Valantia hispida and Catapodium rigidum (both are annuals)

Old and expanded soil pockets enable the germination and establishment of shrubs and trees. [Rhamnus lycioides] is the common, prominent shrub in the Shefela (Figs. 18.1.28, 18.1.29). Following the establishment of the first shrubs, the number of shrubs per rock outcrop increases in the expanding rock crevices (Fig. 18.1.30). R. lycioides has lignified roots that grow and expand within the rock, leading in many cases to the breakdown of the rock and the opening of wide and deep fissures (Fig. 18.1.32). Large crevices contain an increasing amount of soil enabling the establishment of maquis plants that are not typical lithophytes, e.g. [Pistacia palaestina] (Figs. 18.1.31, 18.1.32) and [Pistacia lentiscus] (Fig. 18.1.32). A P. lentiscus shrub that symbolizes the final stages of the succession and deterioration of the Nari rocks is present near Sdot Micha (Figs. 18.1.34, 18.1.35).
The north-west slopes of the hills near Sdot Micha support maquis rich in P.palaestina (Fig. 18.1.36), [Quercus calliprinos], and [Styrax officinalis]. Also here the boundary of the lignified vegetation with the herbaceous vegetation passes at the edge of the Nari outcrops. 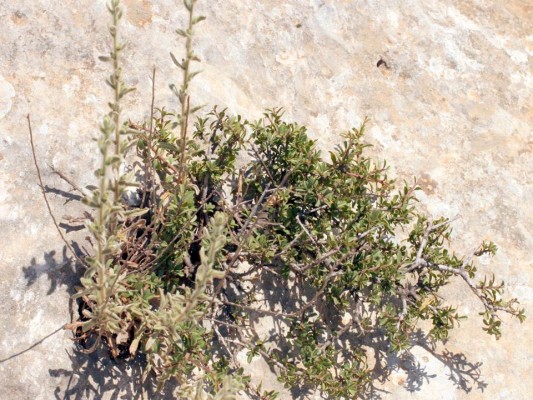 Fig. 18.1.28: A soil pocket first populated by Chiliadenus iphionoides is seen here supporting a seedling of the shrub Rhamnus lycioides 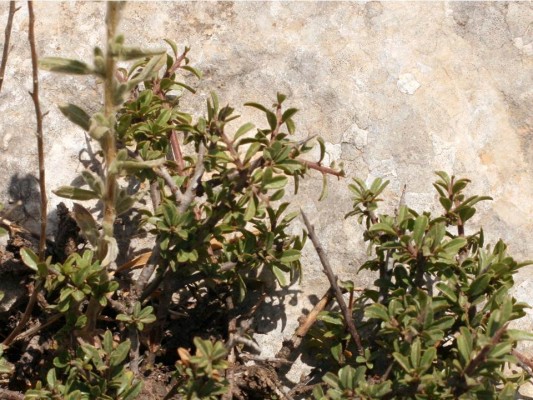 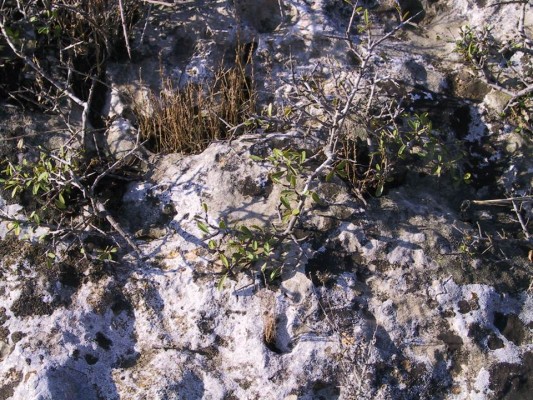 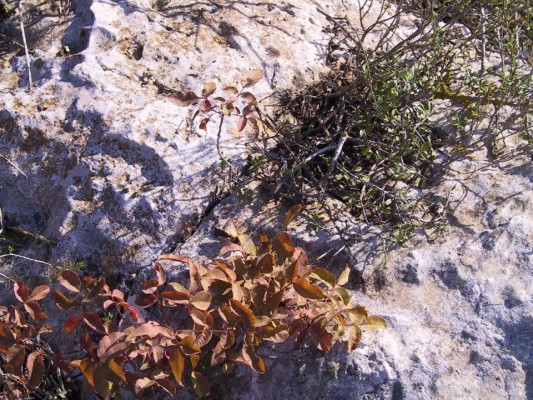 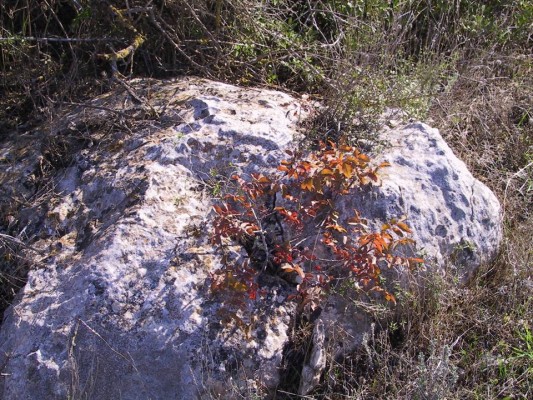 Fig. 18.1.32: Rhamnus lycioides and Pistacia palaestina sharing a wide crevice which they make wider through the thickening of their lignified roots 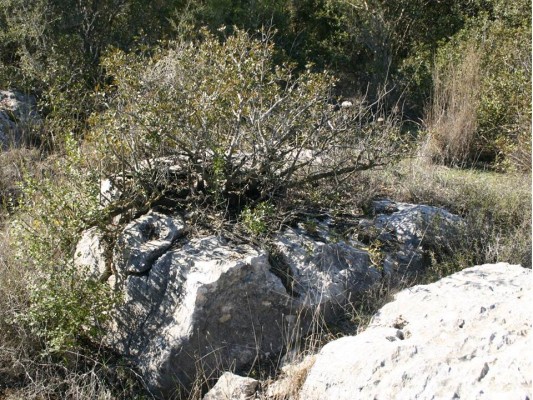 Fig. 18.1.33: Pistacia lentiscus on a Nari rock that underwent biogenic weathering as explained above. The rock was continuous until broken by shrub roots and filled with soil 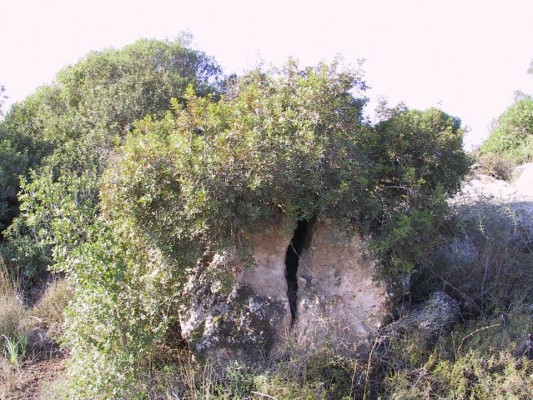 Fig. 18.1.34: Pistacia lentiscus on a Nari rock that became fragmented by the expanding lignified root 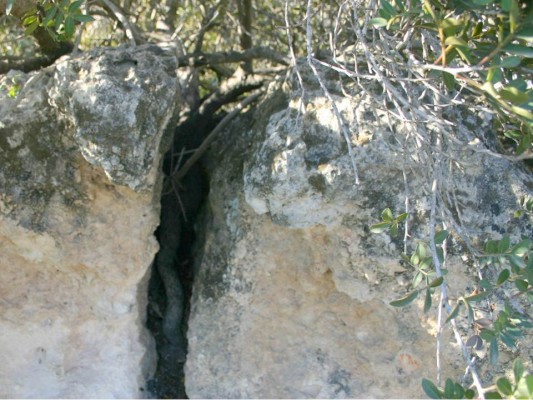 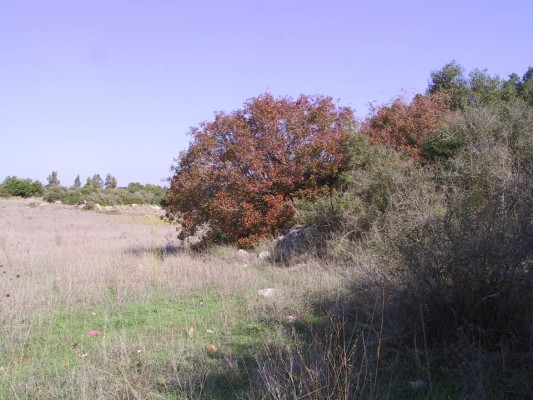 Fig. 18.1.36: Pistacia palaestina as a tree at the base of a slope facing north-west covered with Nari. The sharp boundary of vegetation is clearly seen at the Nari rock margins