Nari (calcrete) is a hard rock compared to the soft rock below it. For a comprehensive discussion of this rock the reader should consult Wieder et al., (1993) and Itkin et al., (2012). One of the most common rock types carrying Nari rock is chalk (Fig. 18.1.1). The past inhabitants of the Judean foothills (Shefela), near Bet Govrin, dug or quarried caves in the chalk for different purposes; they relied on the Nari layer as a ceiling that protected the opened cavity. Nari was formed through continental processes on top of rocks of marine origin. Hence, the Nari follows local topography and not the marine features (such as bedding). The boundary of the Nari layer is clear and sharp (Fig. 18.1.2), due to its impact on the vegetation. The soft substratum of the valleys among the hills supports annual plants (Fig. 18.1.2) whereas shrubs and trees prevail in the area where Nari outcrops occur.

There is a biological advantage for the shrubs and trees on the Nari. Their roots penetrate into crevices and soil pockets in the Nari. The annual plants, being successful in the valleys, out-compete the shrubs and trees by desiccating the soil in the first summer and thus preventing their establishment. The annuals roots do not penetrate deep parts of the Nari layers. The high correlation between the distribution of shrubs and Nari outcrops led me to present the bio-deterioration of Nari to my students. The processes of weathering are in fact plant succession on the Nari, leading to its deterioration. Our recommended place for displaying the following chapter is hills and valleys some half a kilometer SW of Sdot Micha. 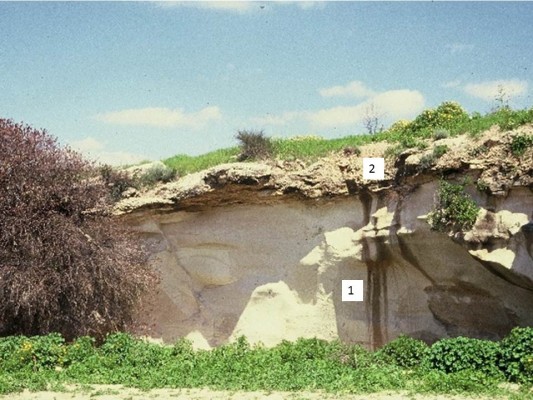 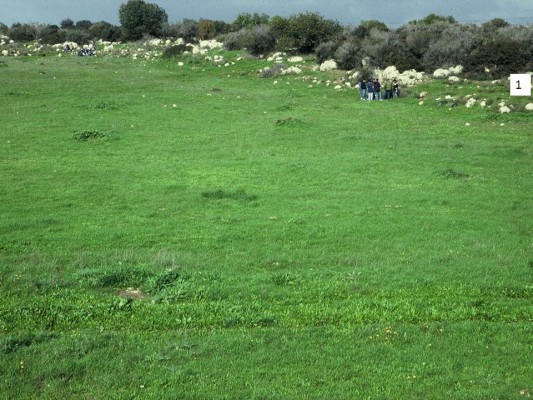 Fig. 18.1.2: A hill covered by Nari fragments and populated by trees and shrubs that have a sharp boundary with the herbaceous vegetation of the deep soil of the valley where there are no rocks

18.1 The Nari crust and its deterioration

The “upper Nari” (Fig. 18.1.3, no. 2) occurs above the chalk and is covered by a hard crust up to 10 mm thick. In places where the upper Nari was broken a few years ago by human activity, the Nari crust becomes prominent due to its low water-holding capacity and the absence of microorganisms (Fig. 18.1.4). The upper Nari, situated below the crust, is relatively soft, has high water-holding capacity and becomes populated by lichens, algae, fungi, cyanobacteria and mosses (Fig. 18.1.4-18.1.6), a short time after exposure. Some of these organisms develop dark pigments that assist them in withstanding solar radiation.

When mosses grow on a layer of soft Nari, as below the crust (Fig. 18.1.6, center), they [local_veg_g1 trap dust efficiently] and increase the water reserves at the rock surface, thus intensifying local rock dissolution. When the undisturbed Nari is exposed for a long time, it becomes populated by microorganisms that typically grow under the local climatic and microclimatic conditions. In the Shefela, epilithic lichens (= growing above the rock; Fig. 18.1.7) occur on the Nari crust of the north-facing slopes. The center of the lichen in Fig. 18.1.7 was consumed by snails and slugs. However, before this event took place, the contact of the lichen with the crust increased rock dissolution by rain-water: water that passed through the lichen’s body and was enriched by various materials released by the lichens, caused enhanced dissolution of the rock. It is hard to evaluate the entire lichens succession because no such study was ever conducted in Israel. The Nari outcrops support endolithic lichens as well (= developed inside the upper layer of the rock; Figs. 18.1.7-18.1.9).

For a simplified way of differentiating epilithic- from endolithic lichens, wet the lichen with some water and scratch it with your finger nail; if a green layer is revealed you touched epilithic lichen; by scratching you removed a thin layer of fungi occurring above the algae. If you have to use metal or flint to scratch and reveal the green layer, you are dealing with endolithic lichens. The upper stone layer with the endolithic lichens is softer than the other parts of the rock. This softer, thin layer is constantly consumed by snails and slugs when the rock is wetted in winter. Consuming the upper lichen parts with the soft rock takes place in sites that have already been consumed by snails. As a result, [useful_plants_f9 typical ”ornamentation” of the rock takes place] (Fig. 18.1.9). The activity of the endolithic lichen inside the rock leads to weakening of the bond between rock particles at the surface and deeper layers of the rock. Thus, rain drops easily splash away rock particles. 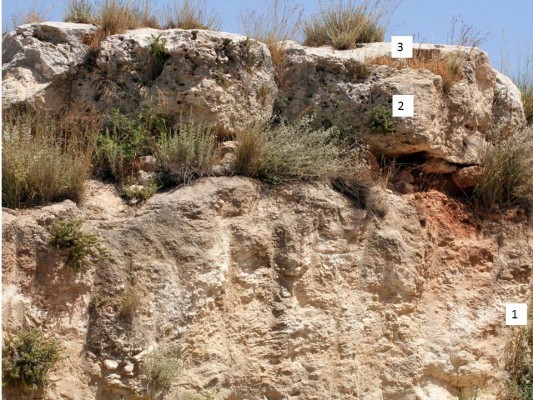 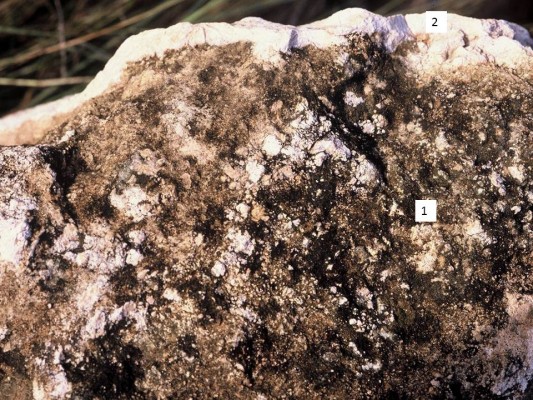 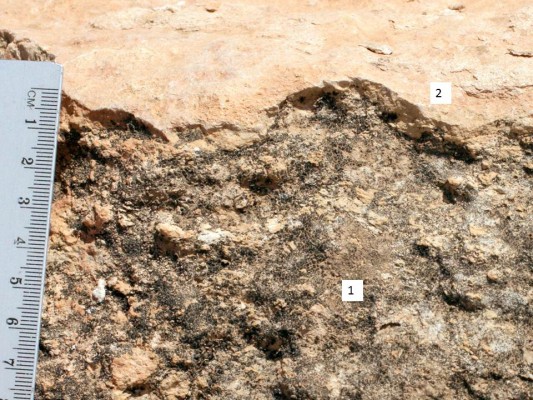 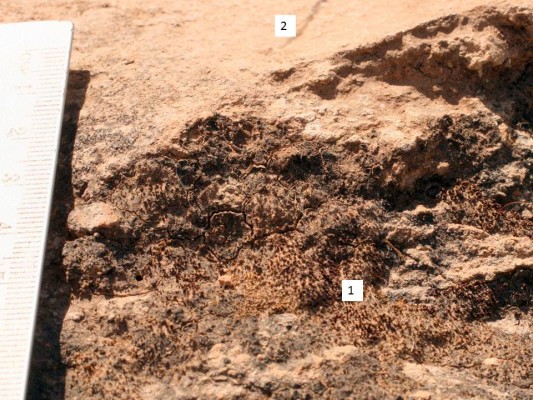 Fig. 18.1.6: Fragment of a Nari rock a few years old: 1. Upper Nari populated with mosses that trapped dust among their stems and leaves, 2. A Nari crust with a low water-holding capacity devoid of prominent microorganisms 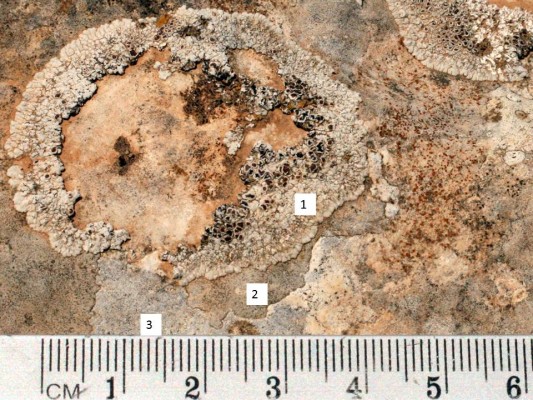 Fig. 18.1.7: Nari crust with natural microflora of: 1. Epilithic lichen, the center of which was eaten by snails or slugs, 2. & 3. Endolithic lichens; the tips of their threads are exposed to solar radiation, become black, and with the white carbonate particles of the rock appear gray 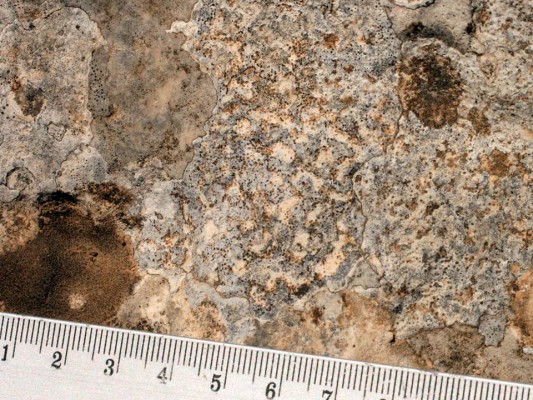 Fig. 18.1.8: Nari crust with endolithic lichens looking gray; the white patches with dark dots are places constantly eaten by snails and slugs, thus preventing the gray coloring of the stone face there; the dots are fruiting bodies of the lichens. The prominent winding crevices are contact lines of individual lichens that commonly differ in the level of grayness 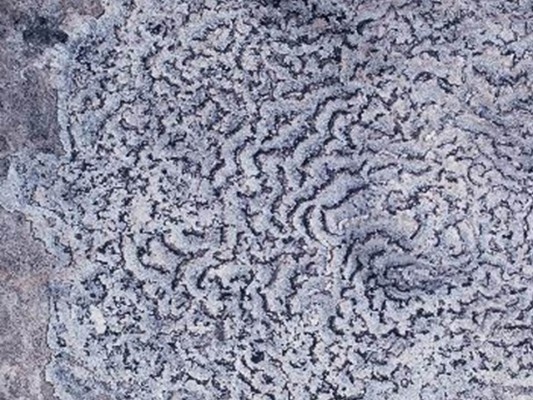 Fig. 18.1.9: “Labyrinth” pattern developed on a Nari crust where endolithic lichen is eaten constantly on the white paths opened by snails and slugs. Dark colored zones develop when the crust is not grazed