The walls of the Old City

In 1538, the Ottoman ruler Suleiman the Magnificent completed the erection of the walls around Old Jerusalem. Since then, the stones of the wall have been exposed to biogenic weathering relative to the climate of Jerusalem and the position of the studied section in relation to the winds blowing during heavy rain showers. Between the Jaffa Gate and the Zion Gate, the wall faces westwards and is therefore suitable for comparison with the buildings and monuments mentioned above. A south to north view of the wall in this section is shown in Fig. 6.5.1. The far arrow shows the soil level we have been accustomed to seeing for dozens of years. From this level the archaeologist Magen Broshi started his excavations in the 1970’s. He left a small hill to indicate the previous level. The near arrow, in Fig. 6.5.1, indicates the soil surface before 1970. The stones below this line look as if they were cut in the quarry at the present time, and were incorporated into the wall, although they are almost 500 years old.

It is possible that the long-term burial of the lower part of the wall by urban waste materials influenced the edaphic conditions in the crevices among the wall stones. It is possible that the wealth of plants growing on the wall below the 1970-soil level line reflect this soil amelioration. The microorganismic landscape of these stones is gray and may be easily seen above the soil line (Fig. 6.5.2). The depth of holes that these microorganisms caused near Jaffa Gate and west of Zion Gate is 2 mm. I presume that the microorganisms in wall “1” of the Citadel ([usefulplantsf3 Fig. 6.3.8]) are also characterized by these cyanobacteria and cyanophilous lichens. 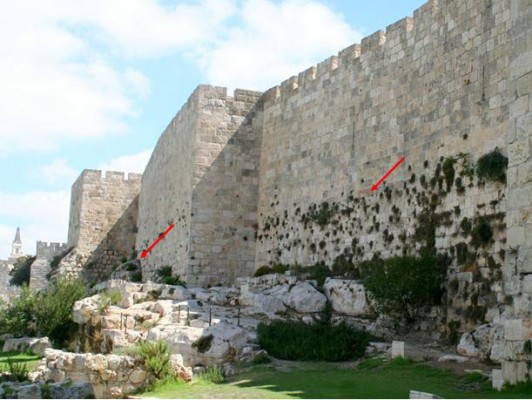 Fig. 6.5.1: The walls of Jerusalem, erected by the Ottoman Suleiman the Magnificent. Its lower half was buried by the debris thrown out of the city from the walls. The archaeologist M. Broshi left a hill (the far red arrow) marking the top soil he met after 1967 when he started digging. The near arrow indicates the former soil level; the stones below it remained white, those above it are gray and are populated with cyanobacteria and cyanophilous lichens. 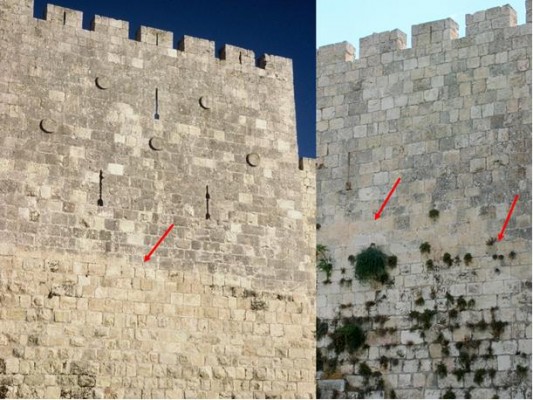 Zachariah’s grave, the Tomb of Bnei Hezir, and the Grave of Pharaoh’s Daughter in the Qidron Valley 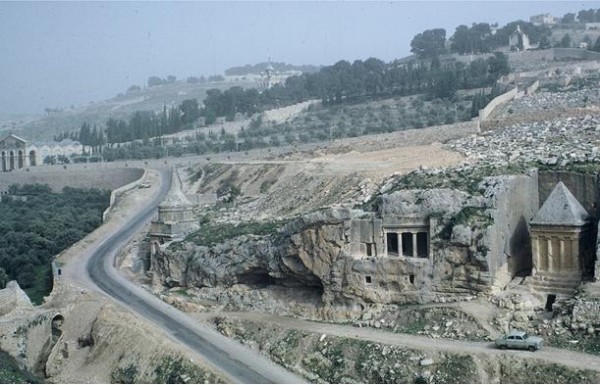 Fig. 6.5.3: The monuments in the Qidron Valley. Their exposed surfaces became populated with cyanobacteria and cyanophilous lichens.

The cliffs of the Qidron Valley have been exposed for hundreds of years and are populated with the cyanobacteria and cyanophilous lichens. According to Avigad (1954) Zachariah’s grave (Figs. 6.5.4 and 6.5.5) was cut into the cliffs some 2050 years ago. A comparison of Fig. 6.5.4, (photographed in 1860-1870) with Fig. 6.5.5 (photographed in 1968), displays the white cliff below the soil surface line. A comparison of the depth of the holes in the exposed rock above the soil surface line, and the un-weathered rock, shows a 10 mm depth of biogenic weathering. In the 1970s I went to the 2600-year old “Grave of Pharoah’s Daughter” and in a similar way found 14 mm deep biogenic weathering holes. 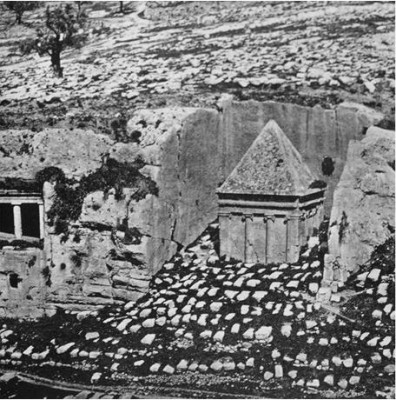 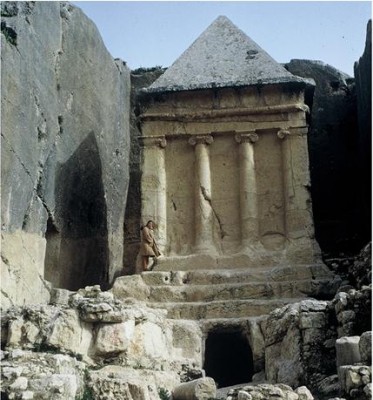 A correlation curve between the weathering depth and the age of the monument, in Jerusalem 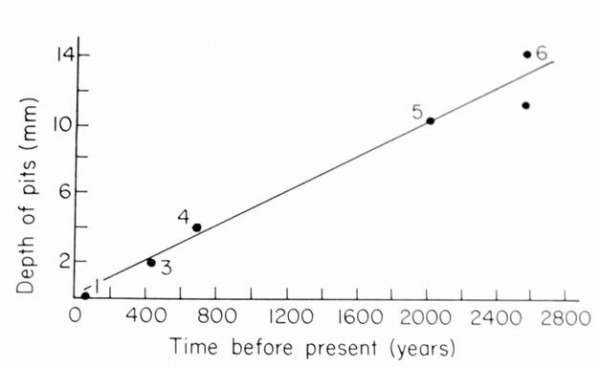 Fig. 6.5.6: A linear regression curve relating depth of holes to the age of the site. 1. Bet HaKerem. 3. Near Zion Gate. 4. Adugdi el Kabkabi. 5. Zachariah Tomb. 6. The Tomb of “Pharoah’s Daughter”. The slope of the regression line implies a rate of weathering of 1 mm depth per 200 years.

The relationship between the depth of organisms-induced holes in the stones and the age of the site is displayed in Fig. 6.5.6. The assumption behind this display is that the microorganismic landscape dealt with above and presented in Figs. [usefulplantsf3 6.3.8] through 6.5.5, influences weathering. The organisms’ activity leads to weakening of the link between the limestone crystals and the un-weathered rock. The rain drops splatter out free crystals, and if the climate is constant, the weathering rate – depending on climate, is also constant. The older the site, the deeper the weathering. The studied sites were mentioned above and are listed in the caption of Fig. 6.5.6.