The Teachers’ College in Bet HaKerem

The Teachers’ College in Bet HaKerem was built of dolomite rocks more than 80 years ago (Fig. 6.4.1). I remember a talk I had with Mordechai Ish-Shalom, who started his career as a stonecutter. The Arab stonecutters used various types of limestone for building construction. Following the use of dolomite stone near Bet HaKerem by the Jewish stonecutters, they named the rock layer known by scientists as Vradim Formation – “Mizi Yahoudi” (rocks of the Jews). These walls taught me several lessons in building ecology. 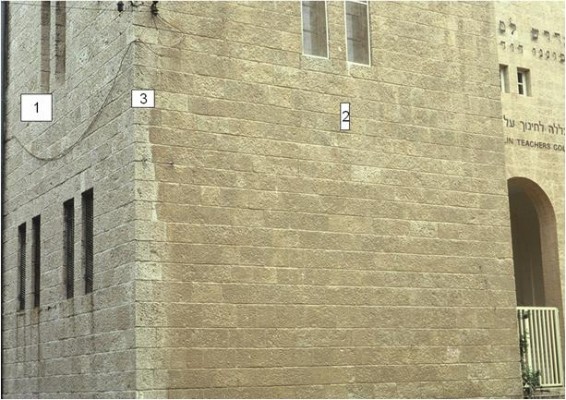 Fig. 6.4.1: A corner of the school in Bet HaKerem. 1. The wall facing the winds bringing rain drops. The wall is constructed of dolomite stones and has remained almost white since construction more than 80 years ago. 2. A wall protected from water-carrying winds and receiving only occasional drops. Desert dust well attached to the wall (integrated) that cannot be removed by washing. 3. The strip on the dry wall that is wetted by water diverted by wind from wall “1.” 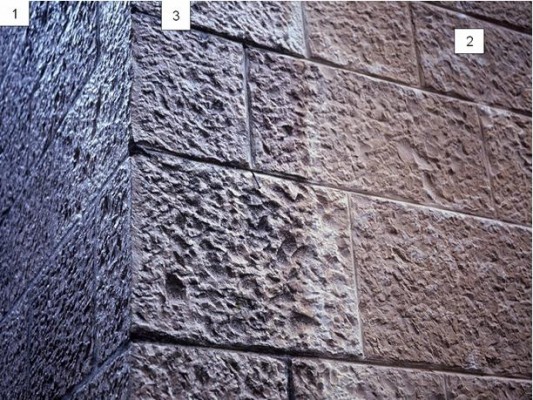 The wall facing the main wind-rain direction (1) remains white, although it is almost the same age as the Scottish Church. The substratum here is hard, therefore it has low water-holding capacity. The microorganisms enjoy only a small quantity of water in each shower, and the extent of their activity and ability to multiply is short. The wall protected from wind and rain is marked 2 and its color is brown. Checking the wall with a magnifying glass revealed light colored grains arranged in horizontal waves (this will be dealt with in detail in Figs. 6.4.11-6.4.15). After checking many such houses, after visits during rainy days, and chemical analysis of the brown crust, I think I have a general picture of the process.

Desert dust is deposited on the walls of all the buildings. It is brought here from the deserts in the Negev, Sinai and North Africa, on hazy days in winter. The walls that receive large quantities of water become leached whereas the walls protected from rain receive occasional rain drops due to air turbulence near the walls. When a single rain drop attaches to the wall; the crust of surface tension of the drop becomes covered by dust grains. These grains concentrate on the lower boundary of the single drop, forming a line of grains. A wave of dust grains is thus formed and functions as a site with relatively high water-holding capacity in the wave. The low quantity of water on this wall does not allow the above-mentioned microorganisms to grow. It is possible that on this wall, in conditions similar to those in the extreme desert (as in a published scientific article), bacteria oxidizing iron and manganese, paste a layer of clay minerals originating in the desert dust and carried on the wind, onto the hard rock. The bacteria constitute a layer with high water-holding capacity, and have a brown color resulting from iron oxides involved in the process.

At the college, as on the walls of other buildings, the typical strip of water is seen flowing on the edge of wall 1 and wall 2 (No. 3 in Fig. 6.4.1). One day, during Purim, I went to the school to take a photo of my daughter at the Purim party. It was raining and the rain painted the walls with a thin layer of water (Fig. 6.4.2), enabling me to display strip 3 on wall No. 2.

I was not aware of this monument, which blends very well with other monuments in Jerusalem, until one spring day in 1982, when I returned from the Muslim cemetery on the slopes above the Qidron Valley, by the Golden Gate. I went there with my late father and his late friend from years ago – Arafat el Bitar (Abu Hani) to study the weathering of tomb-stones, dated by the inscription. My father and Abu Hani read the information on the stones and told the guard “stories” so that he would allow us to visit there. After completing our visit there I went to the Mamila Cemetery. The monument that I saw there whispered to me “study me.”

When I saw holes in the stones facing the rain (“1” in Fig. 6.4.3), I measured their depth relative to the adjacent higher surface level of the stone. When the common depth was found to be 3-4 mm I felt uncomfortable. I returned home and started searching for the name and age of the monument, hoping they would fit the theory I had started to develop. When we reach [usefulplantsf5 Fig. 6.5.6] you will understand how happy I was with the positive findings. 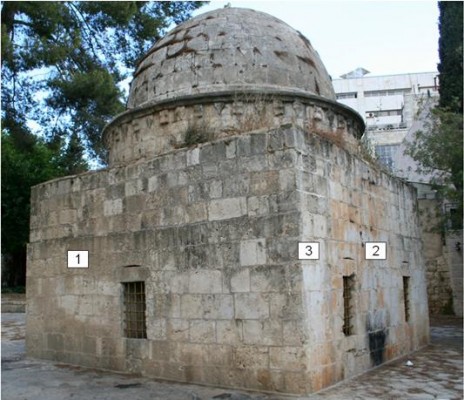 Fig. 6.4.3: The Mausoleum of Adugdi el Kabkabi (or el Kubaki) at the Mamila Cemetery, Jerusalem in 2008. Erected some 750 years ago. 1. A wall facing the main rainfall direction and densely populated by microorganisms. 2. A brown wall protected by the house from direct rainfall. 3. A strip of water flow as a result of its diversion by wind from “1” towards “2”. 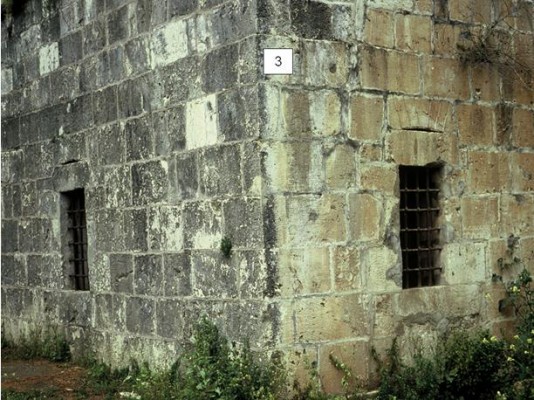 The monument was constructed in 1289 using hard limestone and is known as the Mausoleum of the Emir Adugdi el Kabkabi or Kubaki. It is also known as the grave of Jukha from the legends and stories. The wall facing WSW (“1” in Fig. 6.4.3) was black, resulting from the presence of microorganisms, and had many holes. An ornamental carving on a stone above the window is seen in Fig. 6.4.5, and compared to an identical ornament in Figs. 6.4.11 and 6.4.12, the ornament in the black wall has undergone serious weathering. The agents forming holes in the stones are cyanobacteria and cyanophilous lichens (in which fungi live in symbiosis with cyanobacteria) and they are seen in Fig. 6.4.10. These organisms densely populate the upper tenth of a millimeter of the stone. Each organism releases CO2 into the water surrounding it, thus increasing the dissolving ability of the rain water. In this way the organism causes a hole 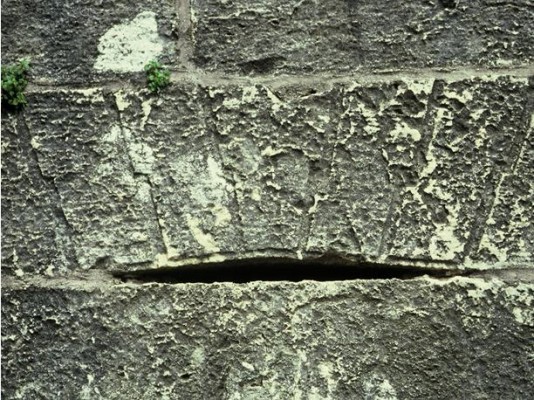 Fig. 6.4.5: The ornamental stone from above the window of wall “1”. Receiving the wind-borne rain, the microorganisms-induced weathering progresses here much more than in wall “2” (Fig. 6.4.1).

to be etched in the stone in its own shape. This CO2-rich water dissolves the material connecting the crystals to the rest of the stone over its entire surface. When another shower hits the stone, the drops splatter out free crystals, hence the weathering rate of the organism-populated surface is relatively faster. The result of the whole process is the formation of a spongy rock surface, populated by cyanobacteria and cyanophilous lichens. During my years of teaching at the university, I would take the students of my course “Vegetation of Israel” and show them the field laboratory or the open-air museum, erected for us in 1289. After 2005 this part of the Mamila Cemetery was cleaned and the monument’s walls were treated with materials that killed most of the microorganisms on the wall. This may be seen by comparing Fig. 6.4.3 (photographed in July 2008), with Fig. 6.4.4 (photographed in 1982). 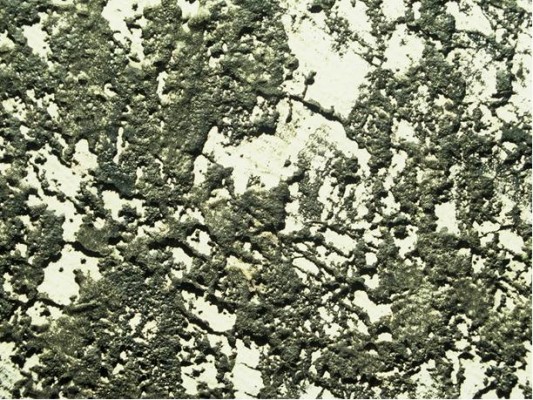 Fig. 6.4.6: A close-up view of a dark stone from wall “1” (in 1982). The oblique lines were originally the chisel marks of the worker 750 years ago. Microorganisms populated the small depressions due to the better water regime in them, causing holes 3-4 mm deep. 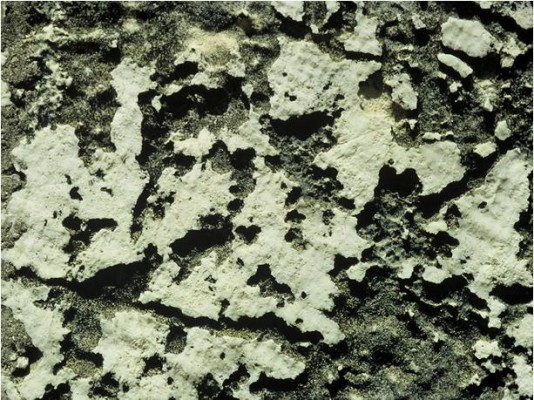 In close up, in Figs. 6.4.6 and 6.4.7, one can see the microtopography formed by dark-colored microorganisms (dark pigments protect them from solar radiation). When comparing them to Figs. 6.4.9 and 6.4.10 (photographed in 2008), the spongy microtopography induced by the cyanobacteria and cyanophilous lichens is prominent. The occasional organisms that survived the chemical treatment return slowly and re-populate the stone surface. Looking again at [usefulplantsf1 Fig. 6.1.6], it is clear that the microorganismic landscape we are dealing with here is of a euendolithic position; the microorganisms dissolve their way into the rock and create their “nano-habitat.” Most of the wall marked 2 in Fig. 6.4.3 is protected from direct rain, and as dealt with in the Bet HaKerem College, occasional drops arrive as a result of local air turbulence during showers. Air-borne dust becomes attached to this wall, possibly as a result of bacterial activity, and is reddish-brown in color (Figs. 6.4.11-6.4.15). The process of fast weathering is not taking place in this wall and the chisel marks of the stone-cutter are seen clearly. In Fig. 6.4.13, we see a point where physical damage to the stone face has exposed a hidden part of the stone. The crust deposited on the stone surface was removed in the upper left quarter of the photo. Many people call this crust “patina” and Fig. 6.4.13 shows how one can prove that the stone surface in the upper left quarter of the photo is younger than in the rest. Photos 6.4.11 and 6.4.12 display the protective influence of position 2 (in Fig. 6.4.3) when compared to the intensified weathering seen in Fig. 6.4.5. Close-up observation of the stones shows the accumulation of light-colored grains in certain places, arranged in horizontal waves (Fig. 6.4.14). To clarify the latter process, an additional wall, which receives light flows of water, is presented in Fig. 6.4.15. 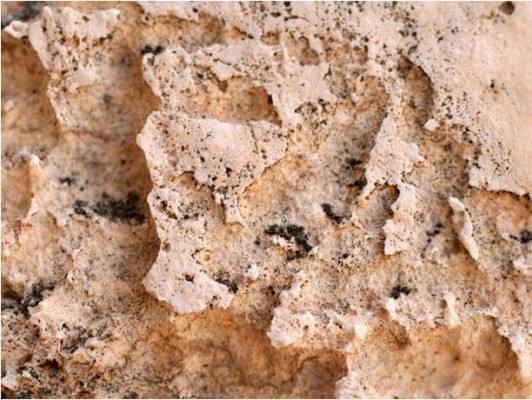 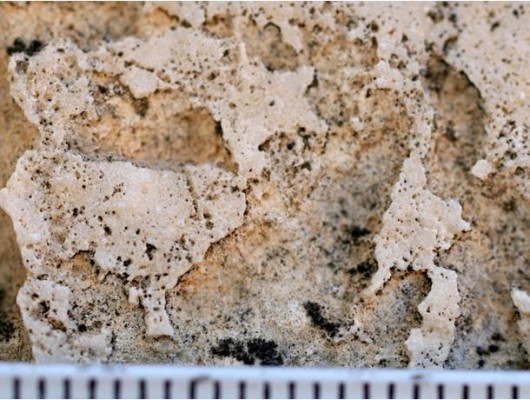 Fig. 6.4.9: A close-up view of an area from wall “1” (in July 2008). Most organisms were removed; the sponge-like morphology they caused in the rock is prominent. 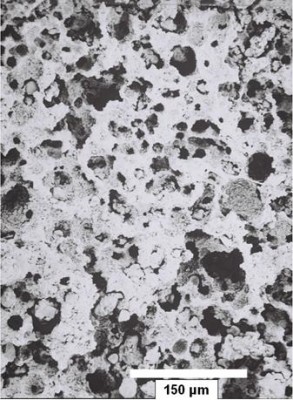 Fig. 6.4.10: A view with scanning electron microscope (SEM) of an area with sponge-like morphology, caused by true endolithic cyanobacteria and cyanophilous lichens. 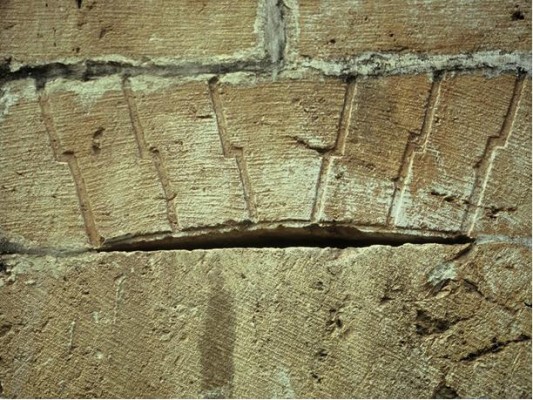 Fig. 6.4.11: The decoration stone above the window in wall “2”. Being part of the wall which receives no rain, it is not weathered (compare with Fig. 6.4.5). The dust deposited on this wall remained on the stone surface. The chisel-marks are clearly seen on all stones of this wall. 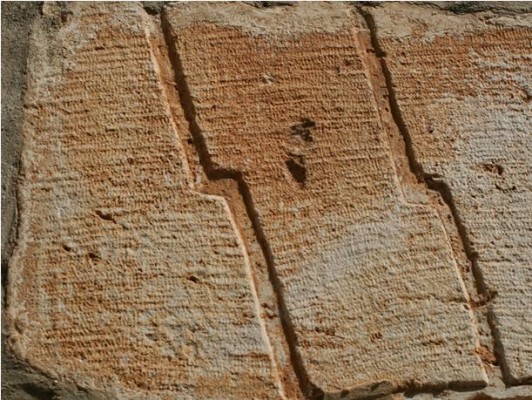 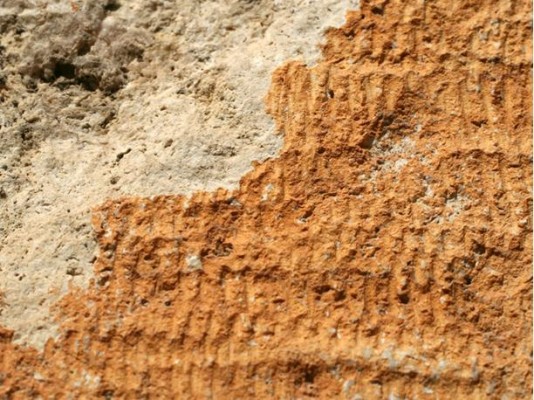 Fig. 6.4.13: A close-up view of an area from wall “2” at a point where a part of the stone, more than 1 cm deep was removed. In the upper left quarter of the photo the brown patina crust is missing. 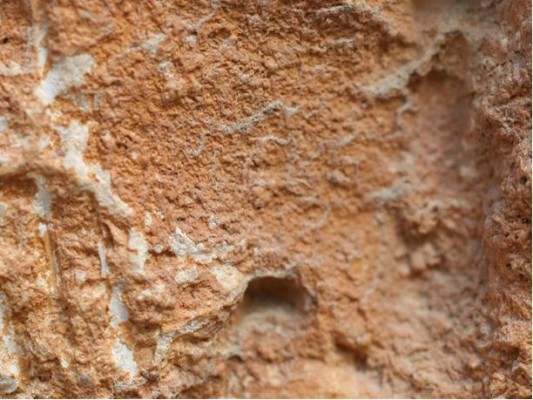 Fig. 6.4.14: Waves of dust grains on the surface of wall “2”. When time passes the grains will become part of the brown patina at the stone surface. 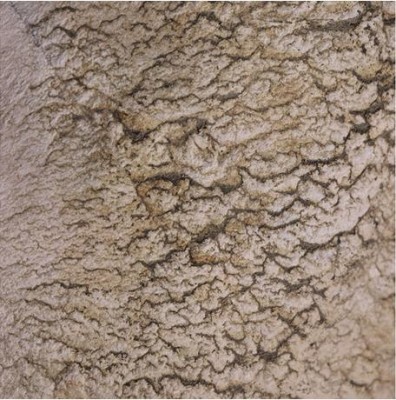 Fig. 6.4.15: A wall where water flows slowly, thus arranging dust in horizontal waves and enable the involvement of microorganisms in the special microhabitat.