The Effect of the Stone Hardness on Its Color; The House as an Ecoystem

Houses in Jerusalem built of stone may become a subject for geological research, for setting prices of components in the house-construction market, and even regarding the honesty of constructors. It is quite easy to recognize the relative hardness or porosity of the building stones. A white stone among dark colored stones is prominent in Fig. 6.3.1. The dark tint results from the thin cover of microorganisms. The white stone is harder than the other stone due to the tighter packing of the crystals, leaving fewer pores available for holding water in the hard stone. Since the microorganisms’ density depends on water availability, the time needed for organism development is longer. Due to lack of water, the time needed for the organisms’ multiplication extends over many years. The time needed for one cell of cyanobacterium to become two is estimated at 20 minutes under optimal conditions. This is the rate of bacteria reproduction, meaning that if environmental conditions are right, the single parent cell will turn into 8 cells after one hour. A rain shower that moistens the soft building stone, allows for one hour of microorganism activity, while providing the hard building stone with only 5-10 minutes of effective moisture. The fact that many 100-year old Jerusalem houses are not yet populated with microorganisms, is because they were constructed from hard stones. 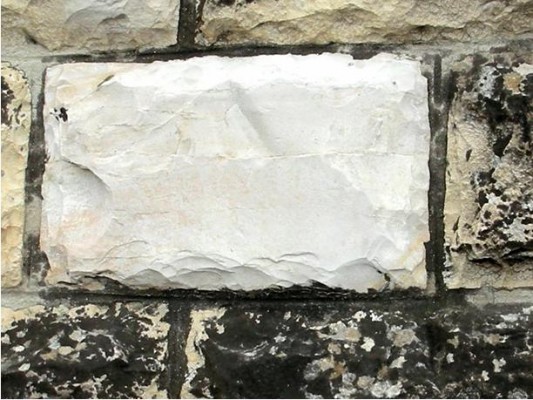 Fig. 6.3.1: A hard limestone stone with no signs of microorganismic establishment, surrounded by soft stones densely covered by microorganisms. 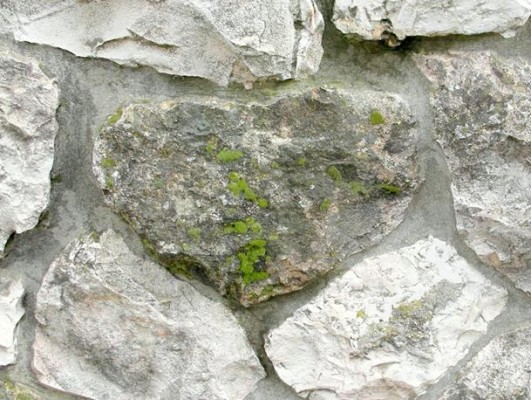 Cases of hard stone inserted into a wall of soft rock are rather rare. There are plenty of cases in Jerusalem where many soft stones are inserted in walls built of hard stones (Figs. 6.3.2-6.3.4). Here comes the “research project” suggested above. It is evident that the soft stone becomes prominent 1-2 years after the completion of the house, thanks to the nature of invasive microorganisms that protect themselves by dark pigments. The soft stones are thus revealed. It is not clear if the soft stones were accidentally incorporated into the wall (e.g. due to the presence of a soft layer in a quarry of hard stones), or whether the builders were tempted by the price difference between the hard and soft stones. In such a case, a dishonest builder might feel it is worth cheating, assuming that the speed of his disappearance from the area will be greater than the speed of the microorganisms’ establishment, thus revealing his forgery. I have never studied this question properly, but I cannot help revealing my thoughts whenever I see a “mosaic wall” with soft stones ([usefulplantsf1 Fig. 6.1.1]). 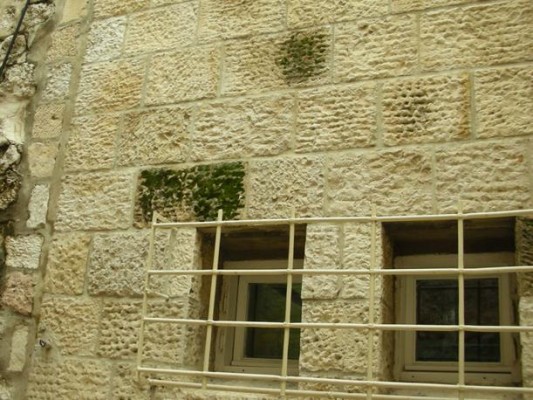 Fig. 6.3.3: A wall of a house built in the Jewish Quarter, Old Jerusalem, after 1967. The three dark stones testify to their low quality. 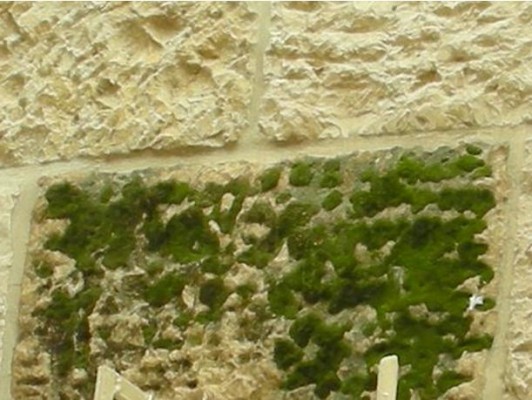 Fig. 6.3.4: A “moss garden” on the lowest stone of the three seen in Fig. 6.3.3. The other stones are hard and not populated by any prominent microorganism after 40 years of exposure.

When the builder came to construct the Scottish Church (St. Andrews Hospice) in Jerusalem (Figs. 6.3.5, 6.3.6), he knew that at least 100 years would pass before the color of a hard stone building’s walls would “mingle” with the colors of Jerusalem. The walls of the Old City, viewed from the site of the Scottish Church, have been exposed for more than 300 years. These walls were already gray to black. He therefore selected a soft limestone (I found that the stones in these walls had a water-holding capacity of 15-20%). Shortly after construction, brown desert dust became attached to the stones and the rain- and wind-facing walls became populated with dark colored organisms. The color of the new building quickly blended with the color of the “old” buildings in the the Old City. 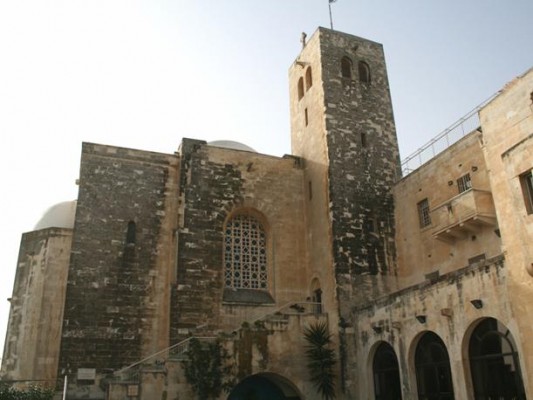 Fig. 6.3.5: The Scottish Church (St. Andrews Hospice), erected to commemorate the liberation of Jerusalem by Field Marshal Allenby in 1917. Building it with soft stones made the “color-integration” with that of Old Jerusalem a short process. 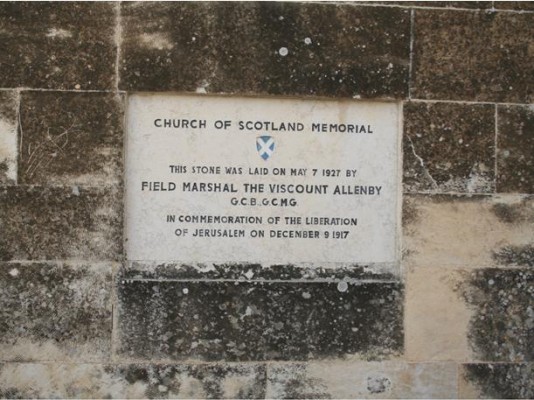 Fig. 6.3.6: The marble plate on the Scottish Church, still white after 91 years of exposure.

The house as an ecosystem

Many people see a house as an a-biotic instrument and expect its walls to behave accordingly. In fact a house is a unique ecosystem that follows clear, recordable rules. Understanding the main components of this ecosystem can assist in the outer maintenance of the house and can save resources in house management in the public domain. Our model will be a house in Jerusalem, built of hard limestone (Fig. 6.3.7). Its position in relation to the prevailing wind direction during strong rain showers is displayed by 3 arrows. In Israel, in most cases when strong rain falls, the wind blows from west to east or SW to NE. In such cases, rain drops draw oblique lines in the air. Thus, wall 1 is wetted whereas only occasional drops arrive at wall 2. Such drops arrive at wall 2 due to air turbulence, despite the fact that wall 2 has “protection” from the whole building. At the margin of wall 2, where it is in contact with wall 1, there is a strip (marked 3). The wind pushes the water here horizontally from the receptive wall 1. The flat roof marked 4, receives all the rain and extra water-flow during showers, from low sites in the roof’s margins, causing micro-habitats such as 5 and 6 in Fig. 6.3.7. Builders construct a gutter enabling the water to flow away from the building more easily. We shall demonstrate here the rules described above by the colors of actual houses in Jerusalem. 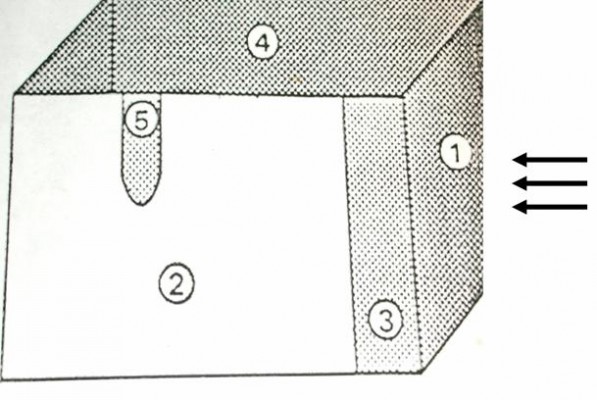 Fig. 6.3.7: A schematic presentation of a house and walls that are wetted as in Jerusalem. The three arrows indicate the direction of strong winds prevailing during rain showers. 1. A wall that becomes totally wet by wind directed rain drops. 2. A wall “protected” from rain by the entire house. 3. A strip in wall “2” which becomes moistened by water diverted from wall “1” by wind. 4. A horizontal roof receiving the entire quantity of rain. Much of this water is drained by gutters. 5. A strip or line of water caused by over-flow from “4”.

The Citadel is built of hard limestone and is several hundred years old (Fig. 6.3.8) stones were originally white, and it is clear that the colors of the building are indicative of a steady, long term ecological system. In a manner similar to that of the model in Fig. 6.3.7 wall marked 1 receives the rain drops that are slanted by the strong winds. Later in this chapter we shall deal with this gray microorganismic landscape of “cyanobacteria and cyanophilous lichens”. The wall protected from the wind and hence from the rain, is marked 2 and has a brown color, caused by deposits of desert dust, without being washed. Water coming from the horizontal part of the monument, arrives through circular openings in the wall and causes clean lines on the wall below the apertures (5). Water trapped on wall 1 is pushed laterally by winds to the edge of wall 2, thus enabling the development of the gray microorganismic landscape marked 3. Below the horizontal part of the wall (marked 4), right of the Citadel, a dark and dense microorganismic landscape occurs; it is the darkest wall in the area portrayed here. 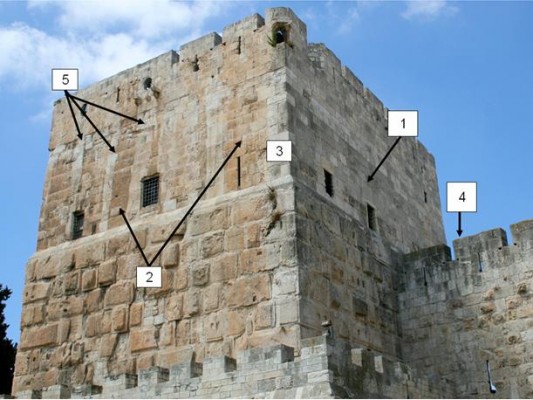 Fig. 6.3.8: The Citadel (David’s Tower) and its colors: 1. A wall wetted totally by rain water. During hundreds of years it became populated by microorganisms, gray when dry and black upon wetting. 2. Brown parts of the wall covered by a patina derived from desert dust and protected from direct wetting. 3. The wet band on the dry wall, caused by rain diverted by wind from wall “1.” 4. A horizontal part of a wall near the Citadel: water flowing downwards initiates a dense and dark microorganismic population. 5. Flow lines of water derived from the roof and thus washing off the brown desert dust.