While writing the book, I badly wanted to download my memories of the lithobiont research (chapter 6), and hence, while writing chapter 5, I forgot an important component of “food from nature” – the truffles. These are fungi that develop in the soil; their fruiting bodies resemble potatoes and their culinary value is very high. I do not want to deal with the truffles from the culinary or the commercial points of view. I dealt with studies on plant distribution and natural phenomena in the field, and when I found, via “Google,” the name “desert Helianthemum” (SHIMSHON MIDBARI in Hebrew) repeated by many authors in various places on the Internet, I felt bad about the direction botany is taking these days. As discussed later, the only perennial desert species of [Helianthemum] that has not yet proved to be associated with truffles, is SHIMSHON HAMIDBAR (its scientific name is [Helianthemum sancti-antonii]). It seems that the authors of this item think they are at liberty to replace the words “Helianthemum which grows in the desert,” in their websites, with a shorter “invention”: “desert Helianthemum.” Since these writers are not aware of the confusion they cause, they copy the mistake from one another and establish it as an accepted term.

This website is a source data base and you may not learn from it how to make a lot of money, but you will find here correct basic information concerning the six Helianthemum species with mycorrhiza which provides fruiting bodies known as truffles. It seems reasonable that other species of Helianthemum have mycorrhitic association, but have not yet shown fruiting bodies. In the following chapter I will relate to some historical stages in the study of truffles and Helianthemum as I know it. Those who wish to learn about the commercial and culinary value of the truffles may avail themselves of Google and Wikipedia.

Mycorrhiza is a system of symbiosis between a fungus (= myco) and plant roots (= rhiza). Studies all over the world show that this phenomenon is very common in the plant world and more than 90% of plants have mycorrhitic relationships. In the introduction to his book “The Ecology of Mycorrhiza”, M.F. Allen (1991) writes that many land plants live in cooperation with fungi. In the symbiosis known as mycorrhiza, the fungus provides the plant with soil resources in exchange for the energy that the plant gives the fungus. A well known mycorrhiza in Israel is that of the [Aleppo pine] with the yellow fungi that is easy to recognize = Suillus granulatus (ORNIYA in Hebrew). Whenever you see a pine, you can be sure that its roots are covered by fungi threads that help the pine to survive there.
The high-plant partners in mycorrhizae that provide truffles and are discussed here, are species of the genus [Helianthemum]. When I was a student at the Department of Botany, Prof. Michael Zohary gave me a project: to study the genus [Helianthemum] in our country and prepare it for part II of Flora Palaestina. I was able to add a few species to the list in the flora, and combined this with information from the field and from international literature necessary for the understanding of the genus.

This species is common in Haluza Sands of the Western Negev and at Rotem – Yamin plain near Dimona. Its typical habitat is stable sand mixed with loess, and there are areas where it becomes the dominant plant. It may be recognized by its long, thin, erect, and flexible stems; its flowers are sessile, i.e., not carried on pedicels (Fig. 5.6.1). The author of the species inserted this property into its name and this is its Hebrew epithet as well. For many years it was considered the only source of truffles in Israel. Many people of North African origin are familiar with it from their country of origin, where it is known by the name “tarfaz” or “tarfach=tarfash”. I remember well the sparkling eyes of the owner of the food shop in the suburb of Beer Sheva where I lived, when I brought truffles to his shop (Figs. 5.6.2, 5.6.3). I collected them in my study area in the Negev (Rotem-Yamin 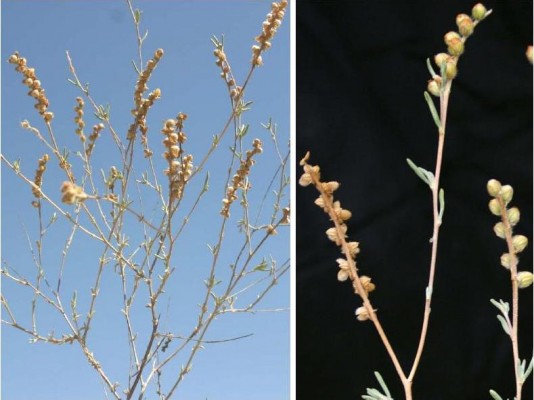 Fig. 5.6.1: Tender and erect flowering stems typify Helianthemum sessiliflorum. The small flowers are carried with a very short pedicel on the inflorescence axis.

Plain). He told me about the truffles in Morocco and emphasized the need for rinsing out the sand from the truffle folds. He told me that the truffles may be found after nights with much lightening in winter. He used to say that they know that lightning opens fissures in the soil and this is how the truffles get out of the soil. Actually, soil composed of sand mixed with loess, always develops a microbiotic crust. When the fruiting body develops below the ground it pushes up the soil above it. The microbiotic crust become fissured and the truffle searchers recognize it immediately. Most truffles arriving at the Israeli markets are from areas populated with [Helianthemum sessiliflorum]. 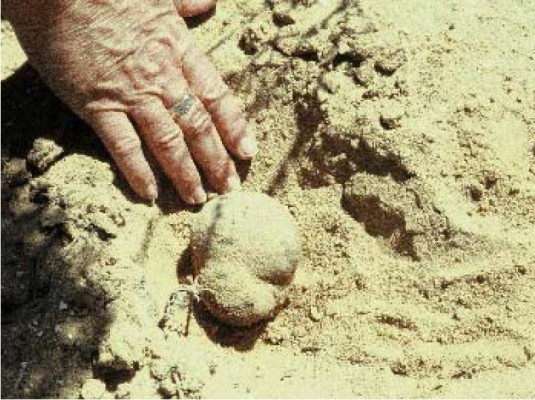 Fig. 5.6.2: Truffle which was located under Helianthemum sessiliflorum shrub through typical fissures in the crusted sandy soil. 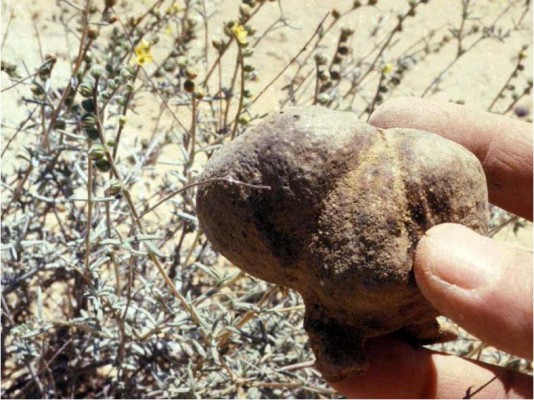 Fig. 5.6.3: A truffle which was located under a Helianthemum sessiliflorum shrub, 5 km west of Ashalim. 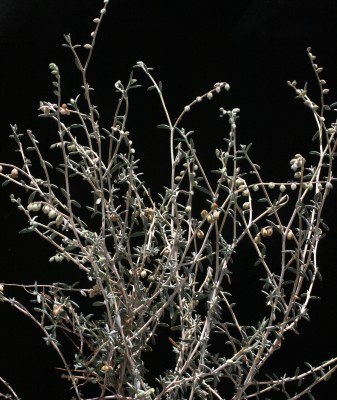 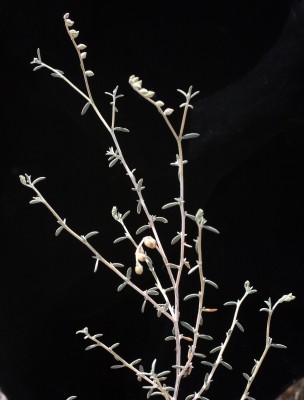 In the rainy year 1994-5 the first case of this [Helianthemum] species supporting truffle production was recorded from the Western Negev near the Nitzzana pass, (Figs. 5.6.6 and 5.6.7). The truffles are fruiting bodies containing spores of a fungus living in cooperation (symbiosis) with the [Helianthemum] roots. In an area where roots of many [Helianthemum] plants carried truffles, the gazelle footprints displayed a set of phenomena which helped me to close a cycle of understanding. Many of the footprints led to holes without truffles. There were 2-3 holes where the gazelle arrived, dug for the truffle, left its footprint (Fig. 5.6.8), but did not succeed in digging it out. The truffles are known to have a typical, strong scent. This is how the “cycle” closes, to the best of my knowledge: in a good, rainy year the fungi produce, 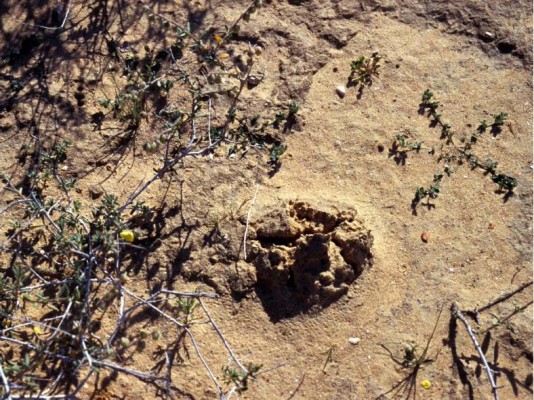 Fig. 5.6.6: A fissure in the crusted sandy soil supporting Helianthemum stipulatum, near Nizzana.

under the soil surface, fruiting bodies with a typical scent. Their growth breaks the soil crust and allows the scent to be sensed by the gazelles. The latter dig in the appropriate places and eat the nutritious truffles. The spores which have a hard coat are not digested, remain viable, and become dispersed in the gazelle dung. A similar situation was discovered in California by a fungi expert (M.F. Allen, 1991) who focused on the study of the entire cycle by other animals and in different species of truffles. I am sure many people know the stories of truffle searches in European woodlands, assisted by pigs and trained dogs that recognize the truffle sites by their smell. Here, the truffle cycle of the Negev touches the highly expensive truffles cycle of the famous French chefs.
No truffles have so far been discovered in the populations of [“Helianthemum stipulatum” H. stipulatum] of the coastal plain. It is possible that we are dealing here with different [Helianthemum] species, although insufficient morphological differences have been discovered as yet. In southern Sinai I found [“Helianthemum stipulatum” H. stipulatum] that resembled the desert form from Israel. It was growing on weathered magmatic rocks but my short visit did not allow me to search there for truffles. 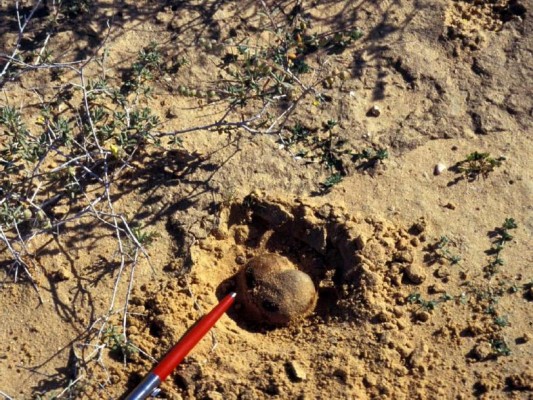 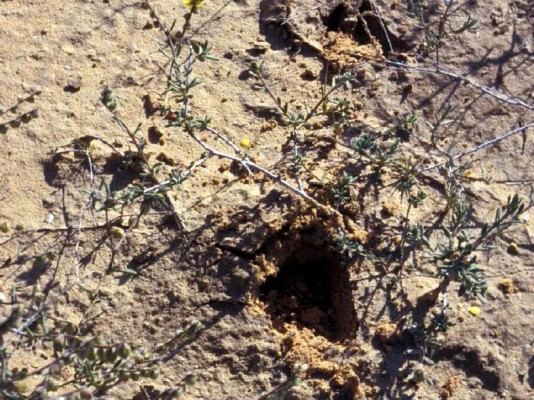 Fig. 5.6.8: A hole dug by a gazelle searching for truffles below a fissure in the soil. It did not get in touch with the truffle which I found there below the foot print of the gazelle digging.

In a year that preceded 1994 (and I do not remember exactly when), Yoel de Malaach, a laureate of the Israel Prize for Agricultural Research, irrigated a small area of sand vegetation in the experimental station he managed some 9 km south of Revivim. Two or three Helianthemum species grew there. Following the irrigation, truffles developed under [“Helianthemum kahiricum” H. kahiricum] shrubs. It was the first and so far only time truffles were found under this plant. Italian fungi experts who determined the fungus provided the name of a fungus that has not found elsewhere during the last 100 years. The details were not published and after Yoel de Malaach passed away we do not have a way of naming the fungus. The typical habitat of [“Helianthemum kahiricum” H. kahiricum] is fissured limestone, magmatic and sandstone rocks. De Malaach’s site was on a shallow soil of sand mixed with loess over weathered limestone rock.

I had a real surprise in 1983 which was a “rainy” year in the Negev Highlands. Near Borot Lotz I found several [“Helianthemum vesicarium” H. vesicarium] plants (Fig. 5.6.9) which, in addition to their endless colorful beauty, had soil fissures typical for truffles (Fig. 5.6.10). A shallow digging there revealed truffles (Figs. 5.6.11 and 5.6.12). 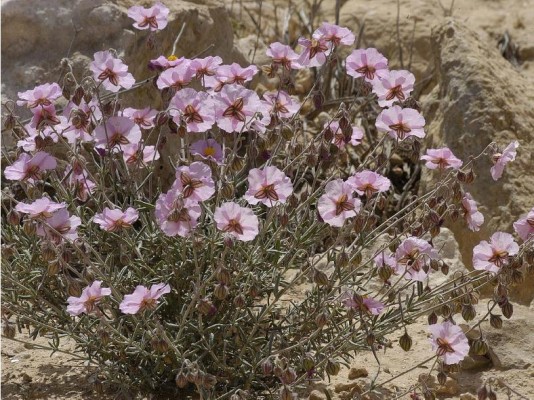 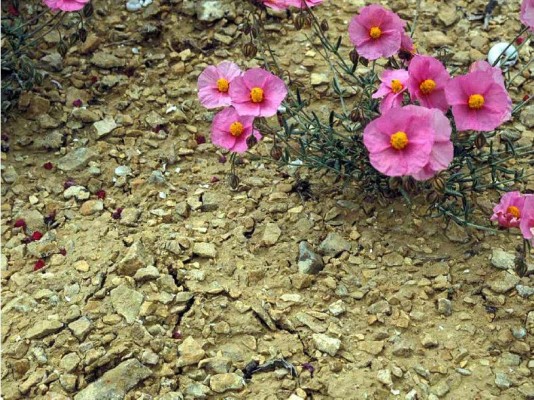 Fig. 5.6.10: A fissure in the crusted soil near a Helianthemum vesicarium shrub, near Borot Lotz, Negev Highlands. 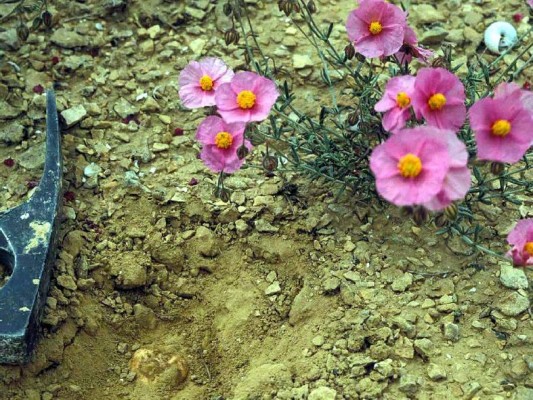 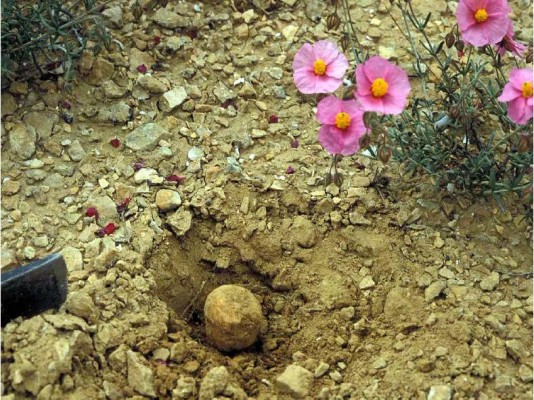 Fig. 5.6.13: A fissure in the crusted soil near a Helianthemum ledifolium plants, near Borot Lotz, Negev Highlands. 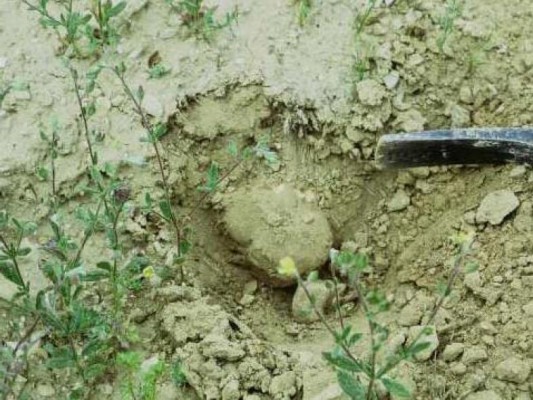 Chances to find truffles on other species

It is possible that an in-depth study of all the [Helianthemum] species, by fungi experts, will lead to different results. The researcher should study how and where these fungi produce their spore-carrying organs. A special phenomenon of nature is often found in all species of the same genus or in all genera of a certain family. This is how we should view the scent of [Origanum] species, the “milky” latex of [Euphorbia] species, the succulence of [Sedum] species, and so on. It is possible that the mycorrhiza, where fungi are involved with truffle formation, is common in all the [Helianthemum] species, but the conditions for truffle formation occur rarely and only in specific soil types.