Many species of [Avena] (Oat; Fig. 3.5.6) offer much movement to the interested observer. The inflorescence is composed of spikelets (Fig. 3.5.7a), each having a pair of yellowish glumes covering two or three dark, hairy flowers. The diaspore (dispersal unit = seed plus plant organelles joined) is flowers without glumes (Fig. 3.5.7b and 3.5.7e); each flower carries an awn that is straight when wet (Fig. 3.5.7d) and bent when dry (Fig. 3.5.7c and 3.5.7e). After the diaspores are shed only glumes remain on the plant remnants (Fig. 3.5.7f). The part of the dry awn below the bent-point is twisted (Fig. 3.5.8). Think of the microscopic arrangement of this part of the awn as similar to the valves of Bauhinia ([useful_plants_c4 chapter C part 4, Figs. 3.4.3 and 3.4.4]). Twisting and straightening of the awn takes place upon wetting. The speed of movement of the steppe and desert species [Avena wiestii] (Fig. 3.5.6b) is relatively high. [Avena barbata], which grows in moist parts of the country, resembles it. Neither of the two species can go faster than the small awns of [Andropogon distachyos] and [Hyparrhenia hirta].

In [useful_plants_c1 the introduction to the Movement chapter of this book] I mentioned the special event when the awn of a 5000-year old [Stipa capensis] twisted upon wetting. It grew on the floor of a house in a town or village in the Arava Valley. I wetted the awn in front of a group of archaeologists who were surprised to hear a lecture on plant movements on a sunny desert morning. Cowboys testify that this plant, which invaded Australia from Mediterranean countries, causes much suffering to the cows there. If a diaspore penetrates the cow’s nostrils and becomes wet, the sharp tip and the turning motion it makes result in the diaspore penetrating deep into sensitive areas of the head. A natural “toy” may be created by sticking [Avena] diaspores (Fig. 3.5.7b and 3.5.7e) into bottle corks or plastic foam and wetting the awns. This will lead to movement in unexpected directions.

On their own, the diaspores creep on the ground, their movement directed by the stiff hairs on the diaspore surface. The “flag” part of the awn stops turning in the air when it touches the ground, causing the hairy diaspore to roll and move forward. When arriving at a hole or fissure in the soil the diaspore tip changes its direction and penetrates the soil to a depth of 2-4 cm. The seeds are thus protected in the soil from high temperatures that develop during fire, or from collection by harvesting ants. The ants cannot move the diaspores as the direction of the stiff hairs prevents it. Rain showers that do not reach sufficient depth will not cause too-early germination. 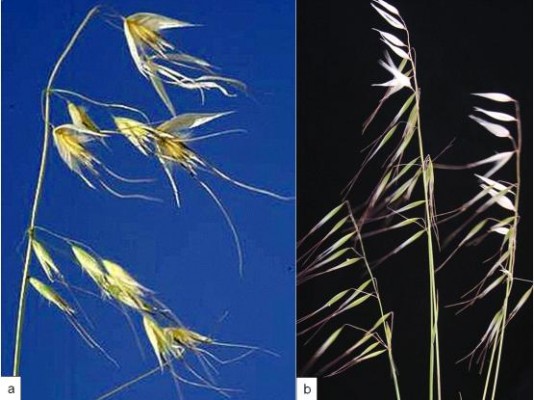 Fig. 3.5.6: Avena sterilis: (a) Avena wiestii (b) at the beginning of seed dispersal. At this stage the spikelet content becomes detached, the awns become twisted and the diasporas creep into fissures in the soil. 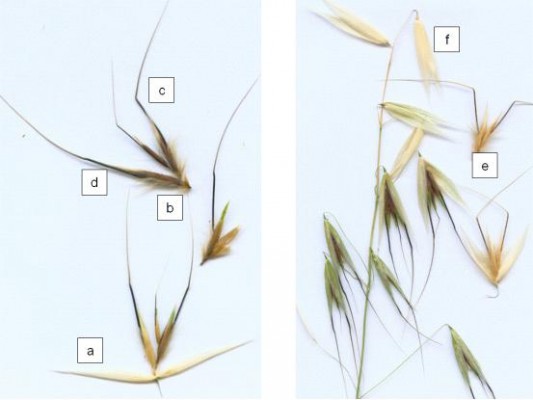 Fig. 3.5.7: Avena sterilis: (a) a spikelet with two glumes, two large flowers and a small flower in between. (b) three flowers joined as a diaspore. (c) a dry awn with a twisted lower part and the upper half that turns like a flag upon wetting. (d) a wetted awn that has straightened after turning. (e) a dry diaspore with awns ready to twist, and opened hairs ready to direct the movement. (f) glumes after the spikelet content has dispersed. 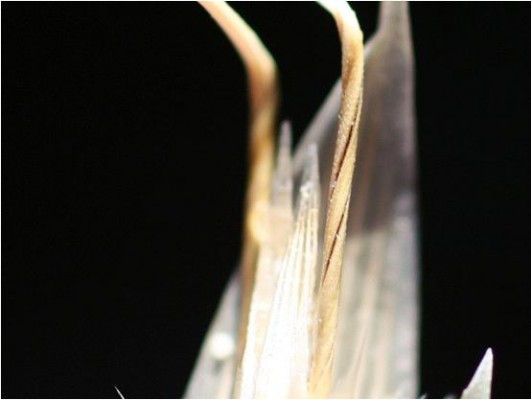 Many readers already know these plants as “the clock plants”. Many parents who wish to show their children miracles pick up fruits of [Erodium gruinum] (Fig. 3.5.9a) or of [Erodium moschatum] (Fig. 3.5.9b) and insert the sharp, hairy tip into a shirt pocket. After some time, the beak, where fibers are arranged as in [Avena] awns, becomes dry and twists. Sometimes the twisting tension combined with the resistance of the beak’s cells, ends with the shooting of the diaspores away from the mother plant. [Erodium crassifolium] (Fig. 3.5.10) belongs to a group of species where the “flag” is covered by long hairs. Each diaspore looks like a feather and flies easily. In spring-time there are days when the desert air is full of these flying diaspores. When the winds die down, millions of [Erodium] diaspores are seen with their diaspore inside cracks in the soil (Fig. 3.5.11).
The hairy feather-like diaspore with a sharp, twisting seed-containing tip can also be found in species of [Stipagrostis] and [Stipa]. 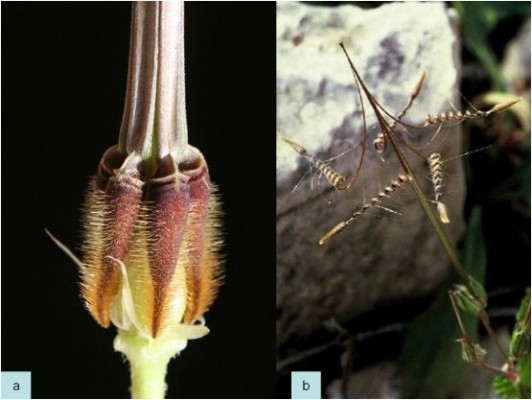 Fig. 3.5.9: Erodium gruinum – three of the five mericarps, the sharp tip and hairs of which assist its penetration into the soil. (b) Erodium moschatum – five mericarps, the beak of which is twisted, in a manner similar to the Avena awn. Twisting of the beak as the result of changes in the humidity, will move the tip of the diaspore into the soil. 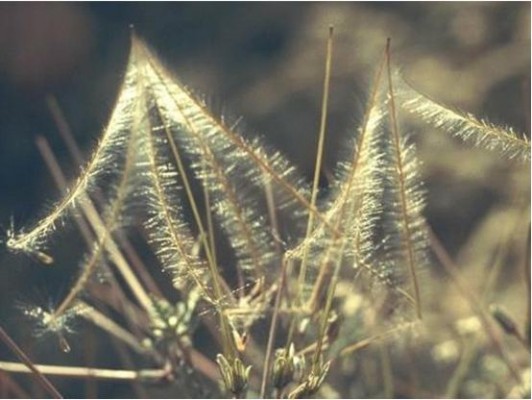 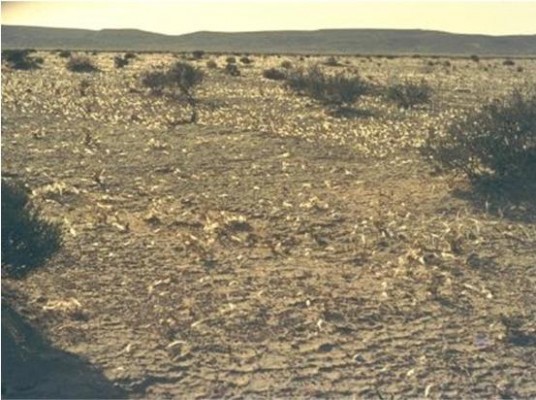 Fig. 3.5.11: A loess field between Yerokham and Sede Boqer where diasporas penetrated into cracks by twisting because of changes in humidity.