[Blepharis] is worth being regarded as one of the most important in the entire group discussed here. Much information is known about it, deriving from the research of Prof. Y. Gutterman (2002) and his colleagues. The reader is referred to these valuable original studies (presented also in the [Blepharis attenuata] page in this website). For my own recommendations on uses of the plant consider Figs. 3.3.1-3.3.4. 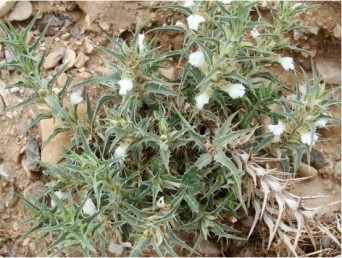 Fig. 3.3.1: Blepharis attenuata – a plant of semi-steppe bathas and of extremely hot desert areas. Following blooming, the ripe fruits remain at the axiles of the spiny bracts until the first strong rains. 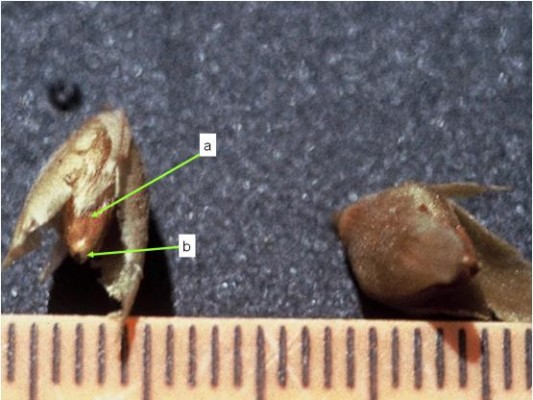 Fig. 3.3.2: Blepharis fruits with four calyx lobes covering them, and opened after wetting. a. A fruit, b. Base of the style. 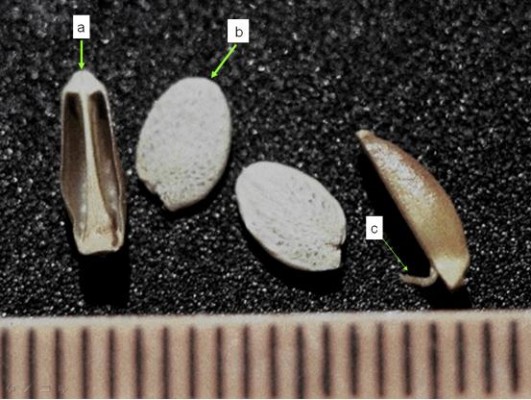 Fig. 3.3.3: An opened fruit of Blepharis containing two seeds. a. Location of the style base. b. Dry seed covered with a adpressed ciliae. c. Pedicel which remains stiff and assists seed dispersal. 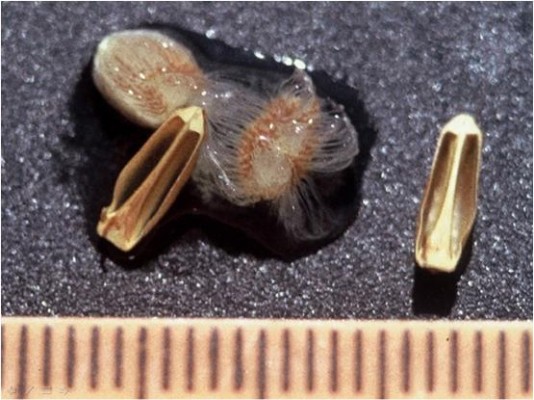 Fig. 3.3.4: The name Blepharis becomes clear after the dry seed is wetted and the ciliae are opened (Blepharon = Gr. eye-lead, eyelash). The movement is fast and the seed moves like a slow white spider. Parts of the ciliae become a mucilage which glues the seed to the ground.

[Aizoon canariense] (Fig. 3.3.5) represents a group of plants in which the seeds remain closed in the fruit during the dry season after ripening. When wetted, the five fissures in the ovary wall (carpels) open, and seeds may be seen through them. When rain drops hit the opened fruit, the seeds jump out. Similar mechanisms may be seen in species of [Trigonella] ([Papilionaceae]) and [Leptaleum filifolium] ([Brassicaceae]) where the plant is prostrate and close to the ground (Fig. 3.3.6). One fissure in the upper suture of the elongated fruit widens and rain drops splash the seeds out. Other plants of the two families open by 2 sutures. These [Trigonella] and [Leptaleum] species are exceptional. 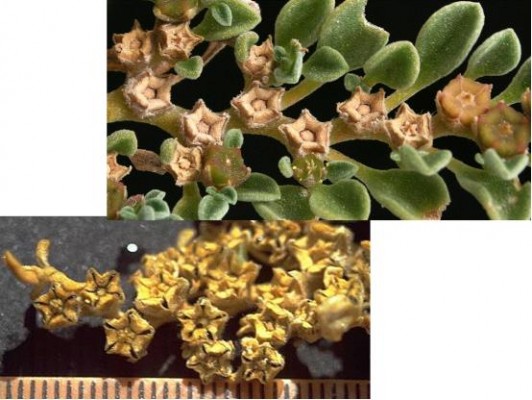 Fig. 3.3.5: Aizoon canariense – upper half – ripe fruits containing seeds ready for dispersal; lower half – wet fruits where the seeds are ready to be splashed out through the fissures opened at the capsule angles. 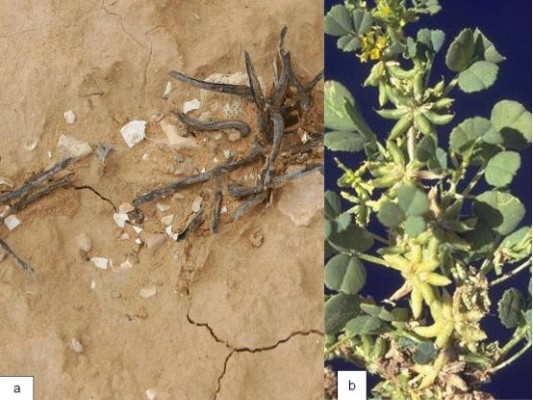 Fig. 3.3.6: a. Leptaleum filifolium (Brassicaceae), b. Trigonella staellata (Papilionaceae). Both species have elongated fruit which opens following wetting in one suture situated on its upper part.

The beauty of [Salvia viridis] attracts insects and nature lovers. When the fruits become ripe the whole plant becomes a very good player in our “game” of movement (Figs. 3.3.7 and 3.3.8). I once brought plants to my grandson. He happily brought them to his school class. Of course I asked him how fast the plants opened and his reply was that his class-mates began to admire him, because the black seeds that came out of the opened calices turned white once they made contact with water. The scientific explanation of mucilage fixing the seed to the ground did not interest them. For one whole day my grandson was admired as the magician who instantly turned black seeds into white. 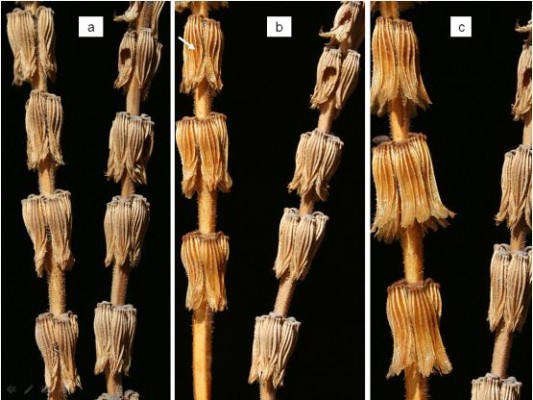 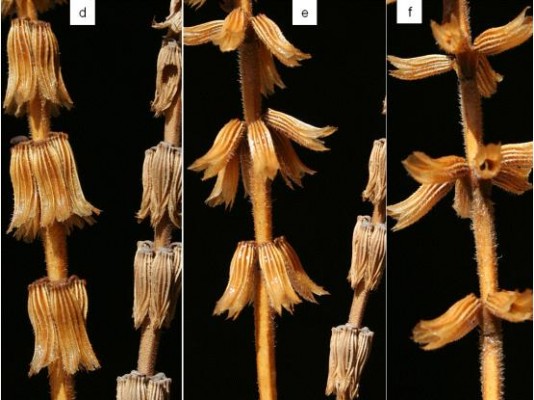 Unlike many plants which grow in Israel and keep the seeds in their body until the rainy season, [Phagnalon] belongs to a group where seeds or seed-containing organs are dispersed when dry. When wetted, the involucral bracts protecting the achenes (= one-seeded fruits), close and prevent their dispersal. When the bracts become dry they open. There is no link between bract movement and presence of seeds or achenes. Bract movement derives from wetting-absorption-and-swelling or desiccation-and-contraction of cells at the base of the bracts. The movement velocity increases as the days pass. At the same time, microorganisms cause deterioration of the exposed plant organs. At the beginning of winter it is hard to find remnants of [Phagnalon] inflorescences. We can conclude that bract movement may serve as an adaptation protecting the plant from seed dispersal when wetted by dew or heavy mist. The mechanism displayed here may be seen in several species of [Phagnalon]. 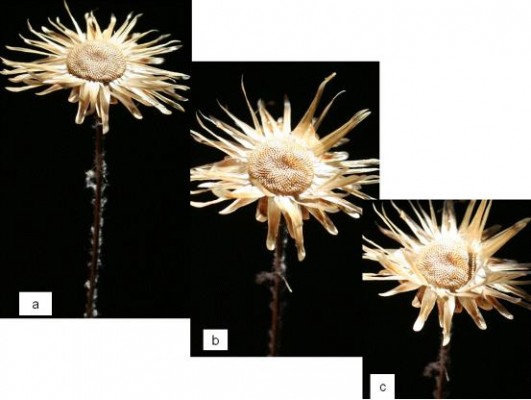 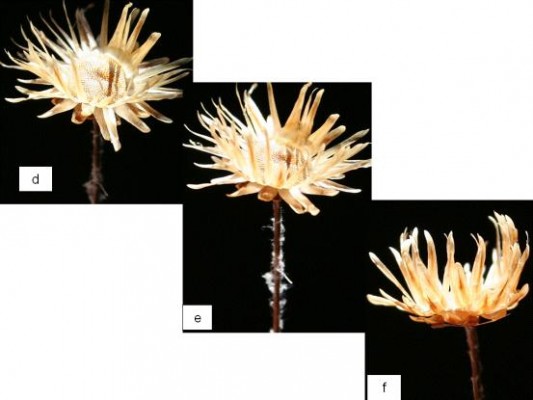 Were we to conduct a referendum among those who know the plant – those who like it would be in the minority. I would certainly lead those in favor and here are my reasons: in winter the plant germinates in circles around nests of harvesting ants in areas where herbaceous plants prevail. I take first-hand pleasure in knowing the explanation to this phenomenon and in fact [https://flora.org.il/en/articles/ant-nests-as-primary-habitats-of-silybum-marianum-compositae-2 discovering it]. In these sites the Silybum plants take advantage of the high concentration of nutrients present in the “threshing zone” of the ants’ nest. In fact the ants dispose of all the nest’s waste material. When blooming time arrives, and an ant touches the opened florets of the flowering head, a special movement occurs, and pollen grains attach to the insect’s hairy belly. We shall deal with this movement in more detail in a later chapter of the book. When the achenes ripen they remain among the closed bracts (resembling the situation in Fig. 3.3.13). When the pappus of each achene opens, the latter becomes detached from the receptacle.

The achenes, aided by a “parachute,” are transported by wind and when they fall on the ground the elaiosome (oil body) attracts the attention of harvesting ants. At this time of the year the worker ants need the oily products of plants to feed the developing young ants. The workers bring achenes into the nest and other workers inside the nest remove the oil bodies from them. The elaiosome-free achenes are disposed of to the “threshing zone”. Being inside the nest and in the threshing zone, the achenes are protected from fire. Seed dispersal on rainy days and on days of heavy dew is prevented by the same mechanism as described above for [Phagnalon]. Owing to the large size of the dry inflorescence (Fig. 3.3.11) and of the involucral bracts, their movement after wetting is conspicuous (Figs. 3.3.12 and 3.3.13). Another point in [Silybum]’s favor is that it is almost free of spines below the head and one may escape without spiny tips in the fingers. With so many miracles in one plant I cannot join those who dislike it because it is spiny and grows at garbage sites and by roadsides. 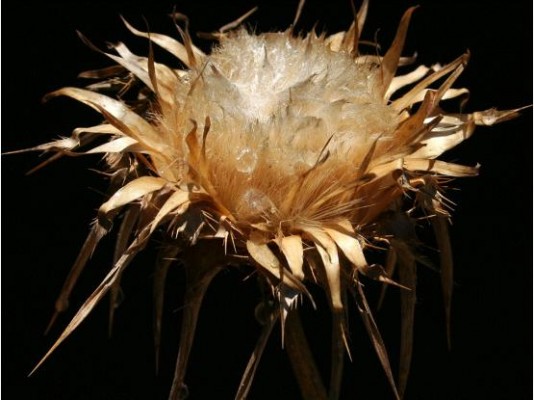 Fig. 3.3.11: Silybum marianum – a dry capitulum, the achenes of which were already dispersed. 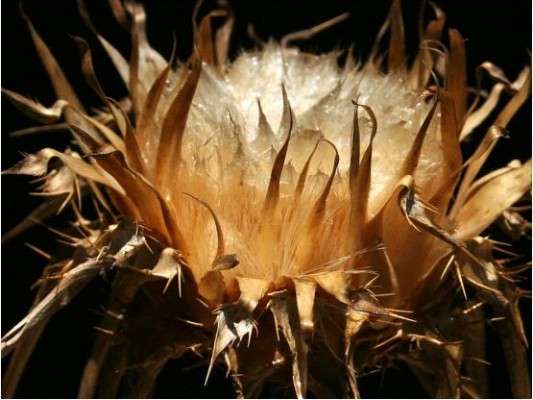 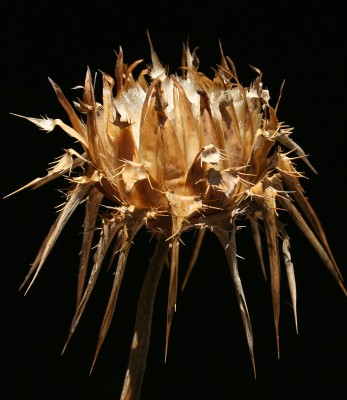 Fig. 3.3.13: Seven minutes after wetting – the internal bracts totally close on the internal parts of the flowering head.