Movement in dry plants: The Rose of Jericho

It is generally accepted that plants are sessile = immobile. In their fast or slow growth, we sense some movement by plants towards their preferred direction. However, it is hard to remain indifferent to the swelling of the hairs in the Blepharis seeds (resulting from their water absorption), which suddenly resemble slow-moving white spiders. [Avena] (oat) and [Erodium] (stork’s bill) have a long hard awn twisted below, which, when wet, turns in circles as if it was the “second hand” of a watch.

Visiting an archaeological dig in the Arava Valley, I arrived when the excavators had found a [Stipa capensis] plant, buried by dust some 5,000 years ago. In front of the 30 students-researchers seated in the improvised lecture hall, I wet one of the plant’s twisted awns and it began to move quickly, turning in circles as if it was a one-year old, encouraged by the audience’s applause. At the time of writing this manuscript, it is a year since my mother (may she rest in peace) passed away, and I cannot deal with plant movement without linking this to her.

Many years ago, when I brought my mother a few specimens of the rose of Jericho ([Anastatica hierochuntica]) I quickly learnt that she liked this plant and its movement very much. To those she wanted to reward, she liked to give a specimen, with a short explanation and the guarantee that the plant would move. Before continuing, let us say first that the “slow” moving rose of Jericho (half an hour for the opening process) had led to a demand for a “faster” plant. On our way to the “champion” we passed [http://flora.huji.ac.il/browse.asp?action=specie&specie=ASTHIE Asteriscus hierochubticus] (5 minutes), [Salvia viridis] (3-5 minutes) until we found [Opophytum forsskalii] (1 minute). Boxes of dried [Opophytum] found honored place in the guest room of my parents’ home in “Hod Yerushalayim.” The visitors: grandchildren, great-grandchildren, friends, guests, residents’ aides in the nursing home, doctors, nurses – all received a “magic sample”. And what really happens here ? – A full explanation follows.

The detailed stories of this plant, past and present would fill a whole book. It is a plant that grows in extreme desert conditions, dispersing its seeds only when enough rain falls in the area where it grows. Its life history has very peculiar points related to its life strategies in extreme desert areas of the Saharan type. The logically-contradictory situation (water & drought) is in fact related to the special adaptations of the plant. The whole story may be found in professional literature – we are dealing here with stories. The plant on the right hand side of Fig. 3.1.1 is dry. The stems are folded inside making the entire plant look like a closed fist. The small fruit, each containing 2-4 seeds, are seen in Fig. 3.1.2 as well.

The left-hand specimen in Fig. 3.1.1 was wetted (with tap water) about half an hour before being photographed. In addition to becoming straight, the wet stems become red and attract the viewer’s attention. Moistened stems are seen in detail in Fig. 3.1.3. The speed of movement is rather slow and hard to discern simply by watching. I am sorry I cannot display the movement at present, but I hope that we shall be able to photograph and display the movement with appropriate photographic equipment. The difference between the details in the pictures are clear. To understand the biological background of this movement, let us consider that after wetting, when the stems are opened (as in Fig. 3.1.3), the softened fruits are ready to receive the the rain drops most efficiently on the small “spoons” at the top of the fruit’s valves. The force of the rain drops opens them and the seeds (seen in Fig. 3.1.4) are splashed away from the plant. In this way the plant assures seed dispersal during a strong shower.

Prof. Y. Gutterman (2002) and his colleagues who studied this group, named this mechanism “rain gauge.” The rain was measured well by the dry plant in Fig. 3.1.5 and the green plant near it germinated and developed in the specific year. The small flowers (Fig. 3.1.6) do not attract many insects, but it seems that the plant has adapted, to produce fruits even without the assistance of insects. 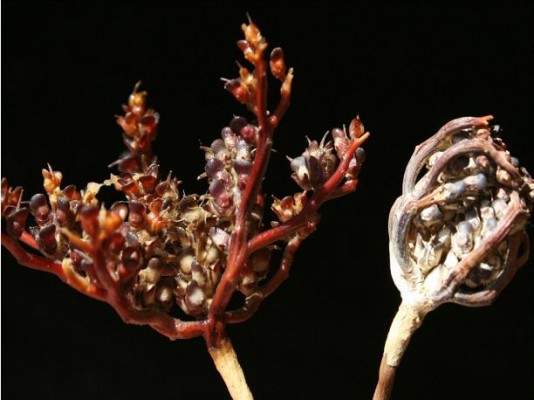 Fig. 3.1.1: Anastatica hierochuntica (the rose of Jericho) – about half an hour after wetting with tap water, the plant (on the left) opens slowly. 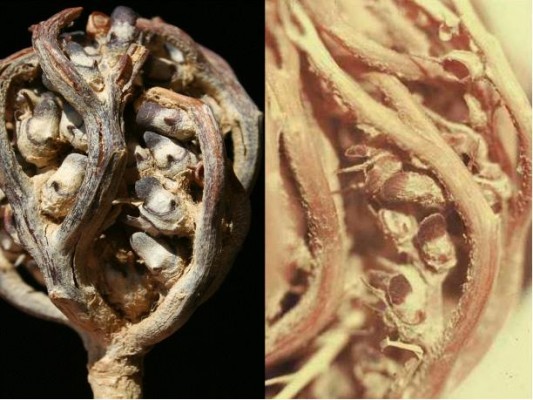 Fig. 3.1.2: When ripening, the plant stems close like a fist and remain so while dry. Note the various fruit angles. 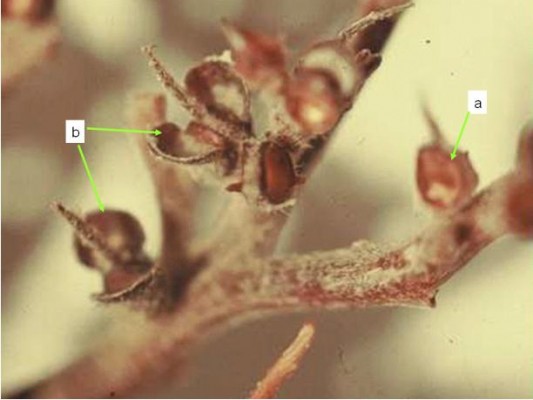 Fig. 3.1.3: Stem straightening owes its movement to different rate of elongation of the inner and outer tissues of the stem following wetting. a. Remnants of an opened fruit, b. A fruit ready to be opened by rain drops. 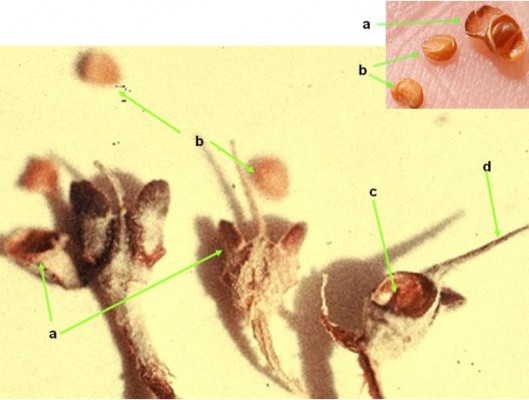 Fig. 3.1.4: Fruits and two seeds derived from one fruit of Anastatica. a. A valve with a spoon-like appendage, b. Seeds, c. Stiff pedicel assisting seed dispersal, d. Style remnant. 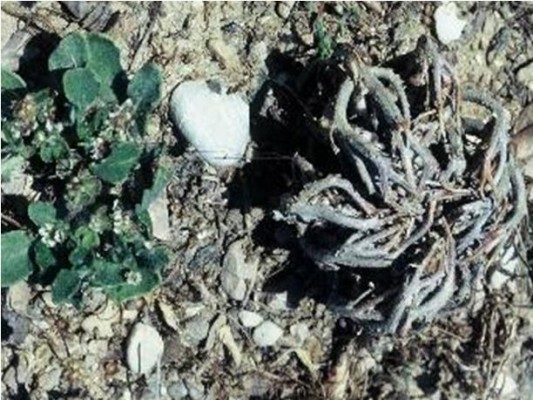 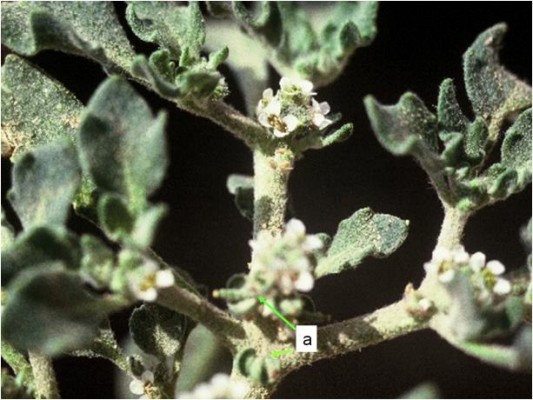 The movement of dry rose of Jericho plants, when wetted, drew the attention of the people living in the area. The Bedouin name of the plant is Kaf el Rakhman = the hand of the Merciful, who by His mercy provides the rain, so important for human beings living there. It seems that the plant was sacred to the Children of Israel traversing this desert thousands of years ago. In Kuntilat ‘Ajroud, situated close to the Sinai – Israel border, an old temple, rich in 3,000 year old Hebrew inscriptions, was discovered and studied by Dr. Z. Meshel. At the site, they discovered a plant of [“Anastatica hierochuntica” A. hierochuntica], which was brought to the temple as an offering or gift. Christian pilgrims visiting Israel in the middle ages, began taking this plant with them as a souvenir. They named it the “resurrection plant” symbolizing the resurrection of Jesus of Nazareth according to their belief.

To enable better understanding of the opening and movement processes let us use the basic properties of the cellulose fibers constituting the plant’s stems. The paper we use is also composed of cellulose fibers. When a single water drop reaches the paper the water is absorbed, the fibers absorb, and a small “hill” is formed. The wet paper swells and is pushed upwards. Let us imagine now that the plant’s stems are composed of two cell layers – the inner one (facing the center of the plant) contains cells that are ready to absorb. The water absorption leads to the elongation of the inner half of the stems. The outer halves of the stems do not elongate, and as a result, upon wetting, the whole fist-shaped plant opens.

Since the stems’ movement is the result of a physical process of fiber absorption – hot water penetrates the stems faster than cold water. Wetting with hot water may lead to opening of the rose of Jericho in 10 minutes, as compared to 30 minutes with water at room-temperature. Cold water may induce opening in one hour or so (and you do not want to hear about the embarrassment I felt when the plants refused to open with ice-water on a hot summer’s evening at my host’s home in the USA).

On a study trip in Italy, in the winter, during which I attended an international conference, I arrived at a colourful market in one of the streets of Turin on a warm and pleasant Sunday. Hard cheeses, sausages, farm-baked bread, and various fruits “gathered” together in a very clean market. One of the stands was green, with large signs announcing the sale of Tilandsia and La Rosa di Jericho. The gimmick of the merchant, a very large man with tattoos all over his hands (Fig. 3.1.7), was plants that are not attached to the soil and become green when wetted. There were three species of Tilandsia (Bromeliaceae – the pineapple family), responding to the water he sprayed from a common plastic home-spray (we use a bottle like this to spray the windows when cleaning them). The tattoo-man conducts a very professional and self confident dialogue with the people attracted to his miracles when passing near his stand. The pile of round plants above the sign “Rosa di Jericho” is of the fern Selaginella. After a few questions and declarations on my part he is “broken” and agrees to stop defending his false position. He is ready to hear and to convey the message to the owner of the stand – he is only selling there (taking the responsibility is a great problem in our world). 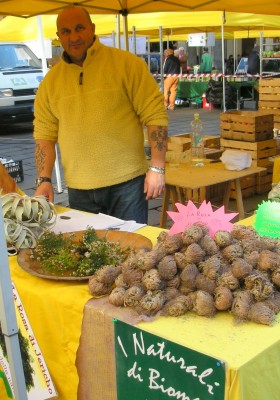 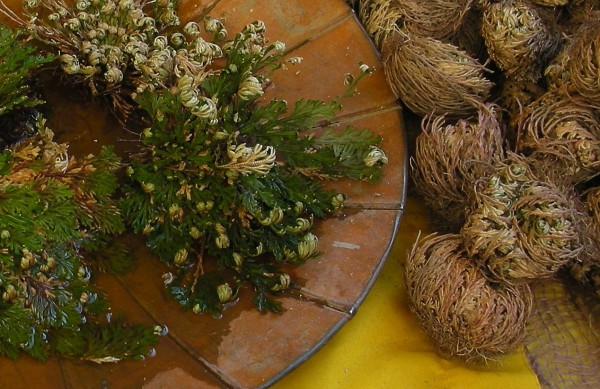 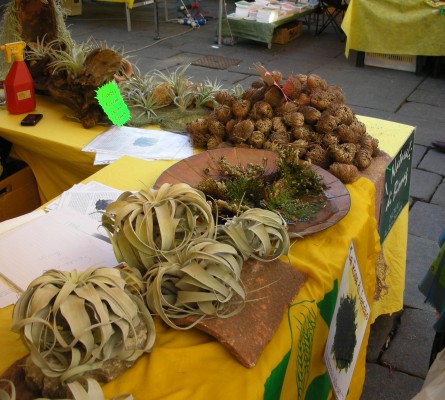 In addition to giving him my University visiting card with my credentials, etc., I bring him the “true rose of Jericho” = [Anastatica hierochuntica] from my suitcase in the hotel. This time, I sit on a crate behind his stand and review the use of the two plants in different cultures. [usefulplants_c1 I have already written in the website] several times on the issue of the “true rose of Jericho” and never imagined that I would have to deal with the “False Rose of Jericho.” I knew that in the USA the Selaginella is sold to tourists as “the resurrection plants”. However, this was the first place I saw it actually happening. The owner of the stand surpassed himself by adding the name “La Rosa di Jericho” to his Selaginella, thus justifying the addition of “the true” to _our rose of Jericho. 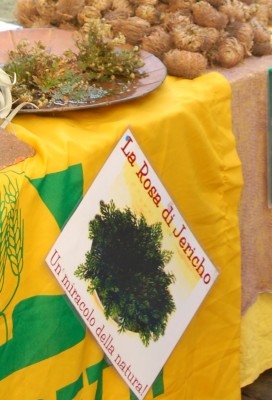 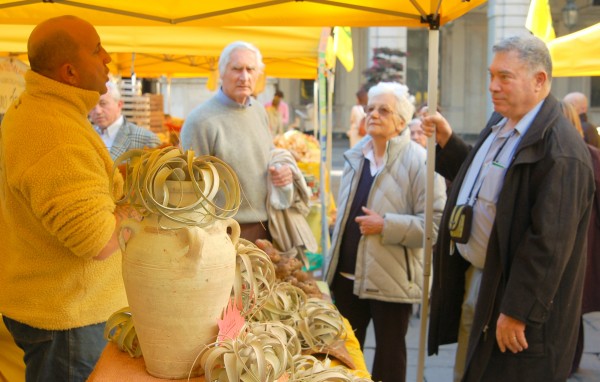 My personal meeting with Selaginella from the group of poikilohydric ferns (those in which the water saturation level of their bodies matches that of their environment), was in Nicaragua. It grows there on consolidated lava flows on the steep slopes of an active volcano. They were not as big as the Mexican species, but when wetted, their stems and leaves stretched and became green. No species of Selaginella grows in the Jericho area and in fact none is found in Israel at present, and there is no evidence showing its presence here in the past. It is not clear to me who started cheating innocent tourists searching for holy souvenirs, by offering them the False Rose of Jericho.

[Alyssum] and other members of the family

There are several species of [Alyssum] which open following wetting, as that shown in Figs. 3.1.12 and 3.1.13. The active tissue is contained in the upper part of each pedicel. Each valve covers one seed, which is easily seen in the photographs. Rain drops fall on the exposed valves after the first wetting, open them easily and splash off the seeds. [Lepidium spinosum] (Figs. 3.1.14 and 3.1.15), which is rather common in the Golan, disperses its seeds in a similar way. For additional species from the [http://flora.huji.ac.il/browse.asp?action=browse&group=21 Brassicaceae] use the links to: [Lepidium spinescens], [Lepidium aucheri], [Iberis odorata], and [Notoceras bicorne]. Members of other families are: [Plantago coronopus], [“Plantago cretica” P. cretica], [“Plantago bellardii” P. bellardii], and [Ziziphora capitata]. 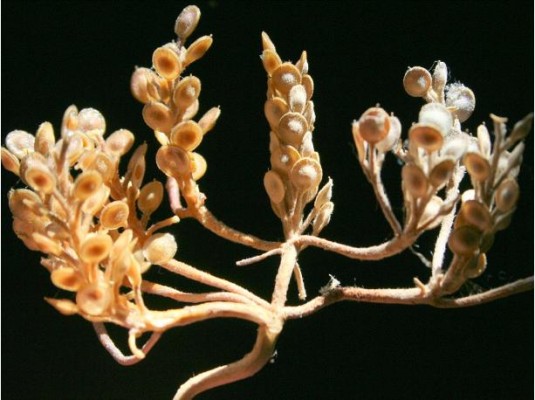 Fig. 3.1.12: Alyssum, the left half of which was wetted 10 minutes before being photographed. 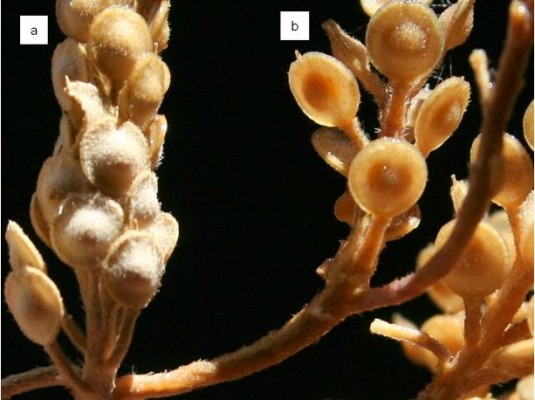 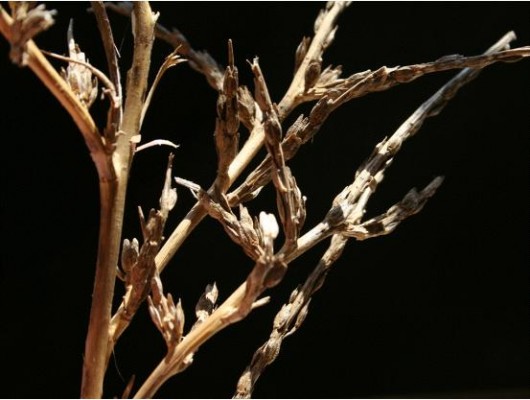 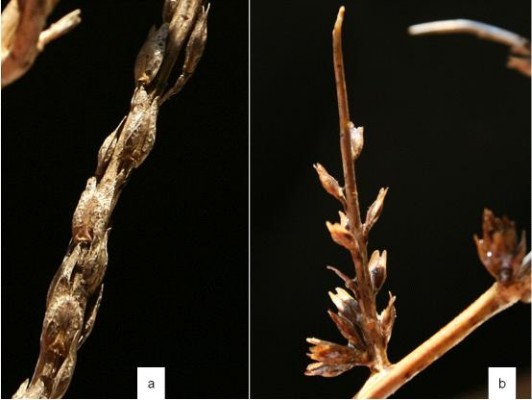