[Tamarix] is a genus containing species that are difficult to determine and has a similar common name in English – “tamarisk”. However, two or three species that grow in arid zones are easy to differentiate and may be of help in discovering water. Tamarisk trees have thin, delicate green stems that function in photosynthesis and carry minute scale-like leaves (Fig. 4.3.5). All [Tamarix] species have small seeds, armed with long and delicate hairs allowing them to be wind-dispersed. According to the studies carried out by Prof. Y. Weisel, Tamarisk seeds lose their viability one month after they ripen. The habitat best fitting seed germination and seedling establishment of tamarisk is where the soil is wet, with some of the salt washed out of it, in the season of their dispersal (Fig. 4.3.1).

Fig. 4.3.1 shows a good example of typical germination habitat: flood in the water course removed soil layers with plants, thus creating sites free of competitors. Due to the specific underground structure of the stream, water will continue to flow in the wadi many days after the flood has ceased. If the flood takes place in springtime, it is to be expected that T. nilotica or [“Tamarix tetragyna” T. tetragyna] trees will become established, and the shrubs seen beside the flowing channel testify to that. A similar situation is seen in a large wadi in the granite mountains of southern Sinai (Fig. 4.3.2), where [“Tamarix nilotica” T. nilotica] has established itself in a natural depression filled with pebbles and sandy soil. Thousands of seedlings develop by the small water puddles and only the strongest survive. In Fig. 4.3.3, the few tamarisk seedlings are accompanied by a thick layer of green algae, floating on the water due to the oxygen bubbles released by them into the water and trapped among their filaments. Later, we shall deal with the importance of such algae in discovering water resources from afar. [Tamarix nilotica] and [“Tamarix tetragyna” T. tetragyna] may be recognized by their typical triangular green or yellowing leaf-scales (Fig. 4.3.5). 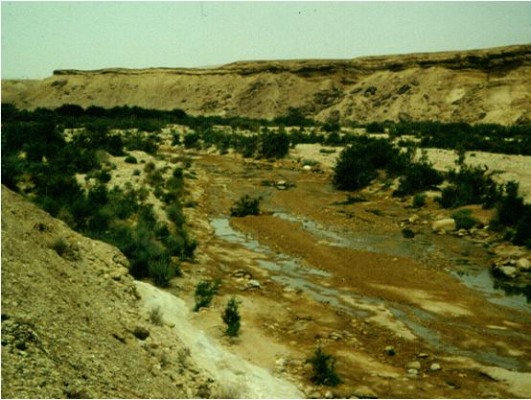 Fig. 4.3.1: Tamarix nilotica on soil “islands” at the main channel of Nahal Zin. It grows in sites where soil stays wet even many days after the flood. 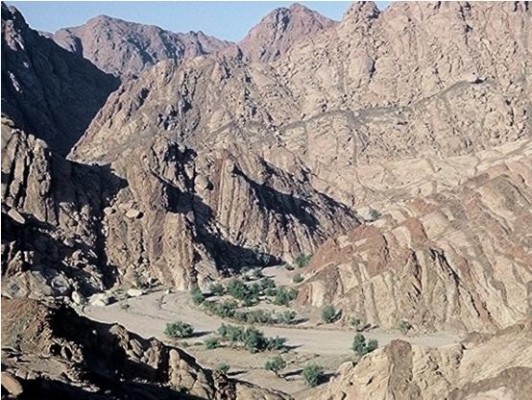 Fig. 4.3.2: Tamarix nilotica on alluvium of a large wadi in S. Sinai, indicating an underground pool covered by the alluvium. 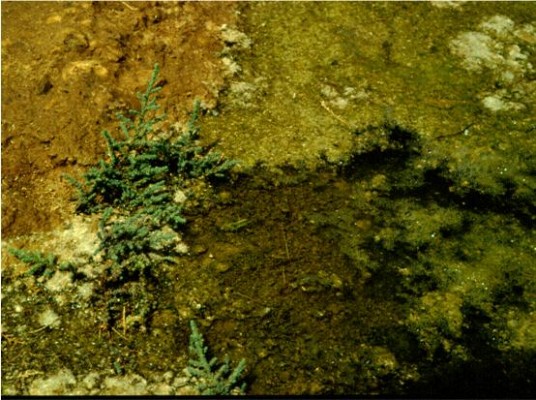 Fig. 4.3.3: A long-standing puddle in a large wadi in the desert with tamarisk seedlings at its periphery. Green algae float on the surface of the water thanks to oxygen bubbles trapped among the algal threads. 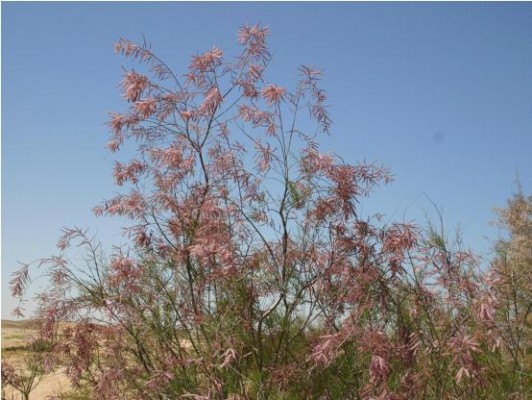 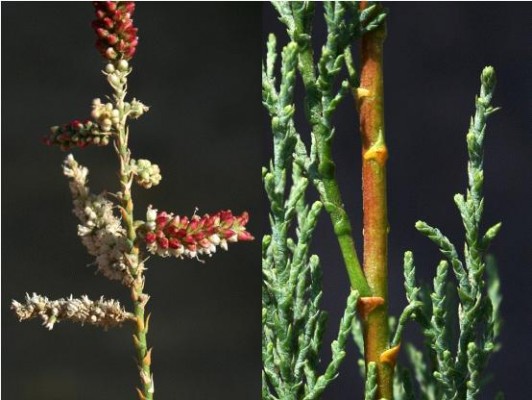 Fig. 4.3.5: Young branches of T. nilotica function in photosynthesis. The small triangular scales are the only type of leaves the plant has.

Contrary to most [Tamarix] species that have their scale-leaves above the green stems, the [Tamarix aphylla] scale-leaves are part of the green stem (Fig. 4.3.8a). It also differs from the other species in Israel, by blooming always in July-August (-September) and developing into large trees (Figs. 4.3.6-4.3.10), sometimes more than 10 m high. Being limited to germination in August through October, it is hard to pinpoint a place where it grows spontaneously. In the 1980’s I visited Nahal Arava near Hazeva in June. Water was flowing in Nahal Arava and the local people insisted that it was the result of a local flood. Finding it difficult to believe, I looked at reports of the Meteorological Service from the preceding 25 years, and found a surprise. At least once a month, throughout the year, a flood event occurs in the southern Negev and in Sinai. After finding seedlings of [Tamarix aphylla] in the greenhouses of Yamit – Netiv HaAsara area, I concluded that every place in the Negev, Sinai, or Edom where [“Tamarix aphylla” T. aphylla] is found in wadis, enjoyed at least one “summer rain”, that led to the germination and establishment of the tree. I then presented the distribution map of [Tamarix aphylla] in a book and in a review article, in the “Climate” chapter, pointing out where summer rains took place. I particularly like north-eastern Makhtesh Ramon area. The only wadi in which [“Tamarix aphylla” T. aphylla] grows there is Nahal Kamai and the other dry water courses to which it flows (e.g. Nahal Nekarot). In all the other wadis only [“Tamarix nilotica” T. nilotica] grows. The conclusion is that at some time in the past there was an event of summer rain over the eastern flanks of Har Ardon; the flood developing from that shower enabled the establishment of [“Tamarix aphylla” T. aphylla]. Later, broken stems or larger living portion of this tamarisk are carried down the slope today, by floods, thus leading to expansion in that direction. 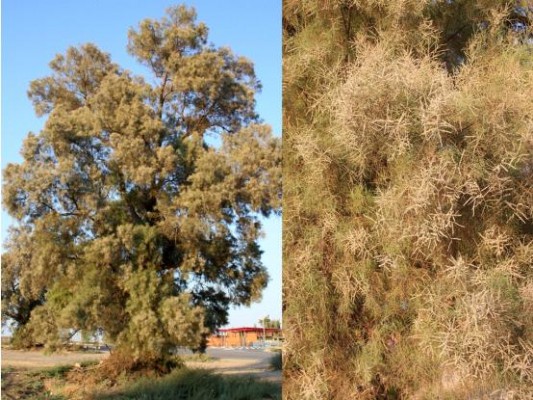 Fig. 4.3.6: Tamarix aphylla blooms in summer. The trees were planted by villagers of Masmiya before 1948. 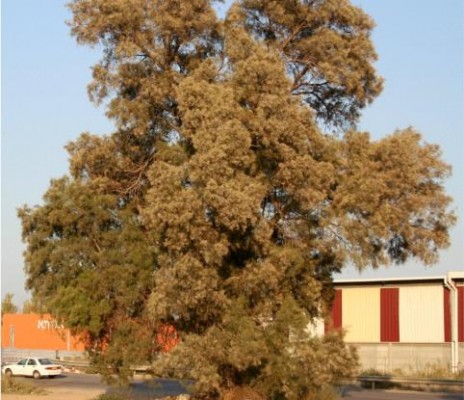 Fig. 4.3.7: T. aphylla blooms in August-September. In the Dead Sea Valley it blooms in July. 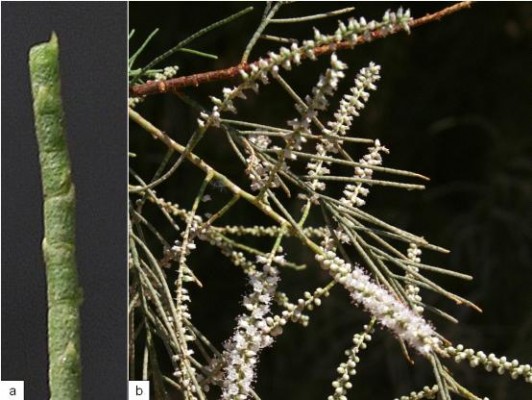 Fig. 4.3.8: Green stems of T. aphylla look articulated (as if built up from a series of long sausages or barrels connected to form one stem). At the upper part of each node there is a short, triangular termination that represents the leaf scale typical of other tamarisk species.

Where can one see the contribution of [Tamarix aphylla] in the search for water?
In our country, [“Tamarix aphylla” T. aphylla] is the tamarisk species most successful in developing into a tree. Its trees, planted near wells in the northern Negev and northern Sinai, develop into large trees, and continue to mark the wells long after the people who dug the wells and planted the trees have left. Many such trees and wells are seen west and northwest of Mishmar HaNegev, Shuval, and Bet Kama (Fig. 4.3.9). A big group of such trees (Fig. 4.3.6) remained as remnants of the village Masmiya which was built of mud blocks that have deteriorated slowly since 1948. When visiting the well near Tel Nizzana (Fig. 4.3.10), it is hard to say what came first – the tamarisk or the well. The well was dug in its present form by the British government before 1948 (Bir el Hafir). I presume that the diggers of this well made use of earlier inhabitants’ understanding of the area.
The habit of planting [“Tamarix aphylla” T. aphylla] near wells is mentioned in the Biblical saying: …”And Avraham planted a tamarisk (Eshel in Hebrew) in Beer Sheva”… Identifying the Biblical “Eshel” is through the linguistic heritage of the Bedouin: they call [“Tamarix aphylla” T. aphylla] – “ethel”; [“Tamarix nilotica” T. nilotica] is known as “tarfa”. 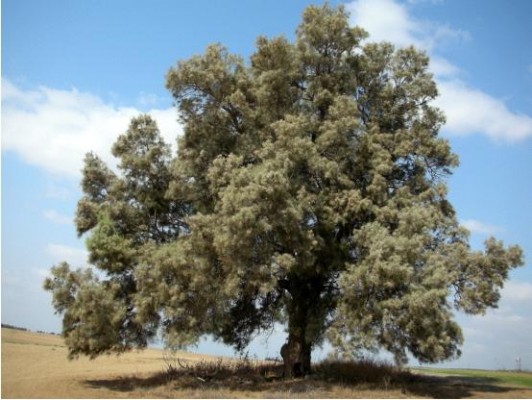 Fig. 4.3.9: T. aphylla planted in a loess plain near Bet Kama; below the tree are the remains of old buildings. 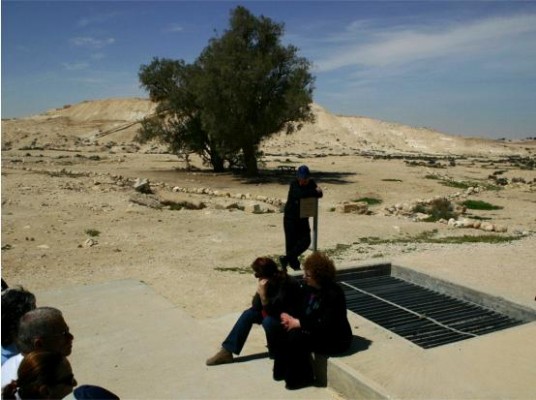