About My Interest in Preparing Ropes and Cords

7. Plants as a source for making cords and strings: from “Field Education”, through the Sea of Galilee, to Jerusalem and Rome

Braiding ropes or cords from plants was the primary reason for my interest in Field Education. I was conscripted into the IDF (Israel Defense Forces) as part of the Amirim group, which was associated with Kibbutz En Gev and served in the first stage of the infantry in NAHAL (Pioneer Youth Fighters). During the first months of training we went for field practice and camped in tents among the carob trees south of Netanyah.
Our squad commander gave us the first lesson in Field Education training and lent me the instruction book, written by Nogah Hareuveni. I read there a chapter about making cords from the bark of [Thymelaea hirsuta] twigs. I peeled off the bark and tried to braid a 3-strand rope, gripping the Thymelaea fibers between my teeth. I succeeded in preparing a few centimeters of strong rope, but it was followed by vomiting. I learnt in a private personal lesson of trial and error, about the poisonous properties of that plant. During the second week we learnt how to braid a cord in the correct manner (Fig. 1.7.1), and the idea that I can help myself as an isolated soldier in the field enthralled me. After completion of our initial infantry training we moved to Kibbutz En Gev. I started to enquire about the possibility of serving the rest of my military service as a Field Education instructor. I arrived at Hareuveni’s home for a personal critical interview and passed it successfully. My friends in En Gev understood my request and agreed to let me go to that military unit, even though the army already had more than the number of soldiers required from our group. After passing the elementary commanders’ course, I started teaching Field Education. I do not remember exactly when I learnt from Nogah how to braid cords, but I do recall that he told us about his learning it from a Bedouin in the Negev desert.

Our mode of work was as follows: Dalia, our Section Officer, was coordinating 2-3 days of teaching activity with the field units. Two or three instructors came to the area where the Field Education course was about to take place. The instructors surveyed the area and made plans for teaching according to the material available in that area. We made local experiments with new materials not used before, and the list of plants suitable for braiding into cords or strings increased step by step. We taught how to make the most common cords, of 1-2 cm in diameter, individually; thicker cords were made by the whole group. I began trying to braid thin strings 1-3 mm in diameter and the success captivated me. I continue braiding such strings even today.

During the dozens of years I taught in the Hebrew University I would walk among the groups of students with their teaching assistant, make an intermission in the phytoseographical-ecological subject I had asked the assistant to teach, and present the cord issue. In places where the source plant for cords was Thymelaea hirsuta I told them about Samson, Delilah, and the ropes, to show how strong Samson was in tearing 7 ropes. I took barks rich in fibers with me on the transportation bus, stripping them during the journey. From these fibers I braided thin, white strings and passed them on to the students (Fig. 1.7.2). 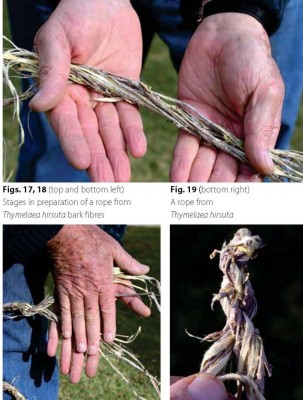 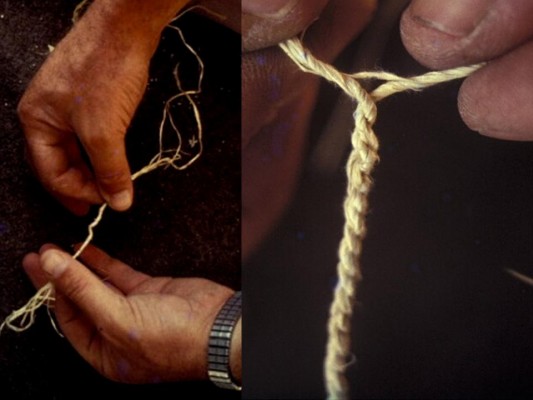 This string braiding hobby became part of a scientific project when the prehistorian Dr. Danny Nadel, formerly a student in my course, “Vegetation of Israel,” excavated a site near Ohalo at the Kinneret beach (the Sea of Galilee). In a year of very low water level, because of drought, he and his crew exposed at that beach remnants of a dwelling site that had existed 18,000 to 23,000 years ago. The object that brought Danny to me was three groups of fibers, each 2-3 mm long (Fig. 1.7.3). Dr. Ella Werker identified the twisted fibers, using an electron microscope, as monocotyledonous fibers.

My long experience in braiding strings and cords, and general plant morphology in Israel and its neighboring countries brought me to two conclusions: there are no monocots in Israel and its surroundings that have naturally twisted fibers. On the other hand there are many plants from the Chenopodiaceae and Labiatae that have twisted trunks. Hence, the twisted fibers of Ohalo were man-made, i.e. they are remnants of strings. When published, they became the oldest reported strings in the world. Many strings from later periods were found in younger layers, in the Judean desert. One year after the publication of our article (Nadel et al., 1994), the excavations in Ohalo 2 continued and I was invited to visit there. The wealth of monocots covering the coastal strip, exposed after the water level dropped, spurred me to give the students an improvised lecture on cord braiding.

Later, seated around the breakfast table Danny offered me the following challenge: let us assume that the chief of the tribe living here 20,000 years ago has an idea and brings it to the string-making expert, asking him to prepare a few dozen meters of string. What would you do if you were the expert or his assistant? I went to the beach, collected leaves and stems of [Typha domingensis], [Juncus acutus], [Cyperus articulatus] (Fig. 1.7.4), and [Cyperus alopecuroides] and took them to my home. The first experiment showed me that splitting leaves and stems of [Cyperus articulatus] into thin longitudinal bands gave me a large reserve of fibers suitable for string making. I braided 70 meters from which Danny’s associates made fishing net (Fig. 1.7.5). 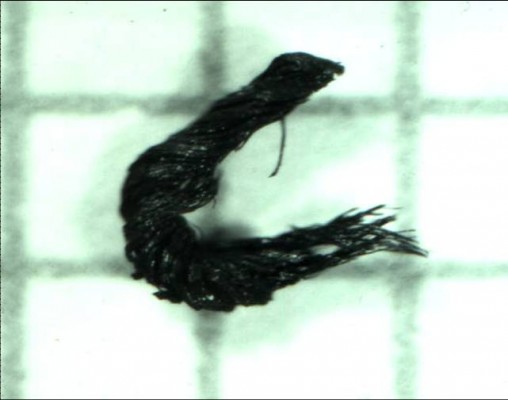 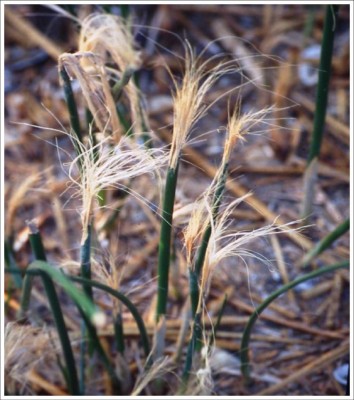 Fig. 1.7.4: Leaf and stem fibers of Cyperus articulatus cut on the Kinneret beach a few days before photographed 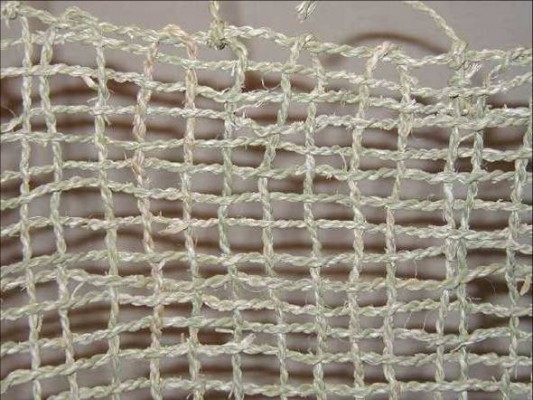 Fig. 1.7.5: A model of a fish-net prepared from a 70 m string made of Cyperus articulatus fibers

In Ohalo 2 Dr. Nadel’s crew found scratched pebbles which are supposed to have functioned as plummets for vertical fish nets; it is easy to assume that the upper part of the net was tied to a floating tree trunk. The amount of fish bones in the dwellings was larger than that of the area outside the dwellings. Another link of the site to our activity in Field Education was in the preparation of mattresses. Danny discovered bulks of a perennial grass that were placed in criss-crossing layers. I recalled the mattresses from [Sarcopoterium spinosum] that Nogah taught us to make. We were “spoiling” ourselves by covering the thorny shrubs with bunches of the grass [Hyparrhenia hirta].

In the summer of 1995 I joined a research group that discovered plant images near the image of the man on the Shroud of Turin. Among the images in the photos, I found a longitudinal line that looked like a necklace in the form of a figure of 8 in the area of the feet. This is the shape of a cord made of plant material when it starts to unravel. The resemblance to cords found in archaeological excavations is great. I marked all the string images and when adding them together they totaled 10 m. We believe that this string could hold the Man of the Shroud to the cross; the three nails in his hands and feet were not sufficient to hold him on the cross.

In 2006 permanent exhibitions on the Shroud research were set up in Jerusalem and in Rome. I lectured on the botanical findings and the cords were one of the important subjects in my lecture. I sat near the cardinal who opened the exhibition in Rome and braided a string for him from the fibers I had with me. He held the string tightly and said that he will use it as a book-mark, because it was made in the same manner as the cord that tied the man of the Shroud to the cross. From then, I decided that everyone who hears my lecture on the Shroud or gets my book on the subject (in English, Spanish, and Italian) will receive as a souvenir a string I braided from the fibers of the leaves of the [Washingtonia robusta] growing in my garden in Jerusalem (Figs. 1.7.6, 1.7.7). 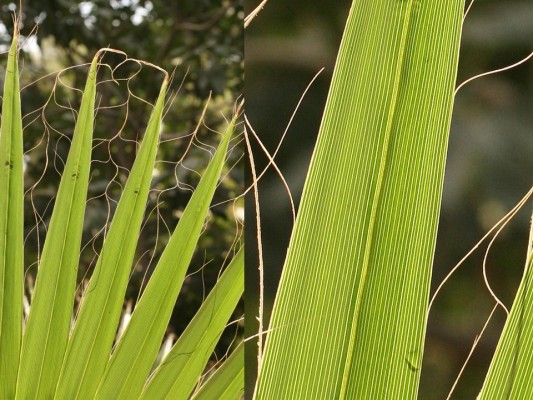 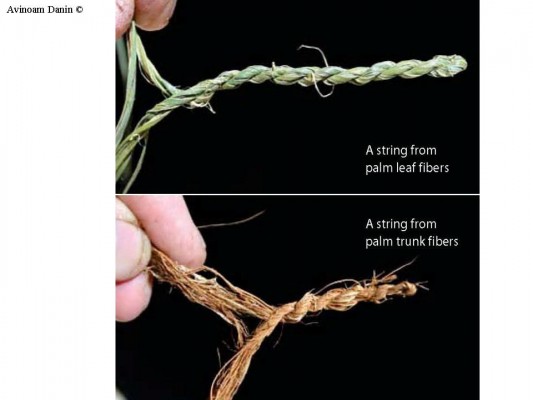 Fig. 1.7.7: A string made from Washingtonia leaf fibers (the green one) and from trunk fibers (brown)