It is an ornamental plant cultivated mainly in gardens in rainy areas of the country. It grows wild in New Zealand. Thin, strong, pliable string may be made from its fibers. A 10-20 cm long string makes a nice souvenir. Before lectures that I gave abroad, in 2007, I prepared at my leisure dozens of strings from these fibers that I gave to my listeners so that they would remember my lectures every time they moved their bookmark. When not in bloom the plant resembles Agave (Fig. 1.3.1), but it is neither spiny, nor succulent. Among the many leaf-rosette ornamental plants that have been introduced into Israel, this is the only one that has the two leaf halves connected to each other at base (Fig. 1.3.2). The Maoris in New Zealand make strings and cords from the fibers and use them to bind wood logs in building their boats and rafts. They also scratch the outer leaf parts with a sharp stone or knife to make the traditional skirts that they wear when appearing before tourists (Fig. 1.3.5). To do this, carefully scratch the green parts of the leaf on both sides until reaching the white fibers at the centre (Figs. 1.3.3-1.3.4). It is convenient to split the leaf into 1-2 cm wide longitudinal strips. Now press the leaf surface on a stone or wood surface with the blade of a knife, and pull, so that its surface is scratched by the sharp edge. Personal experience here is worth more than a hundred words. 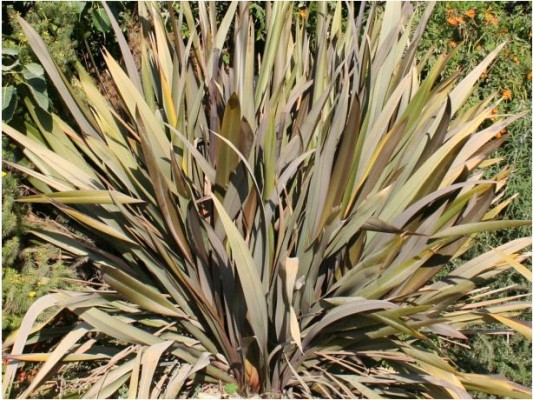 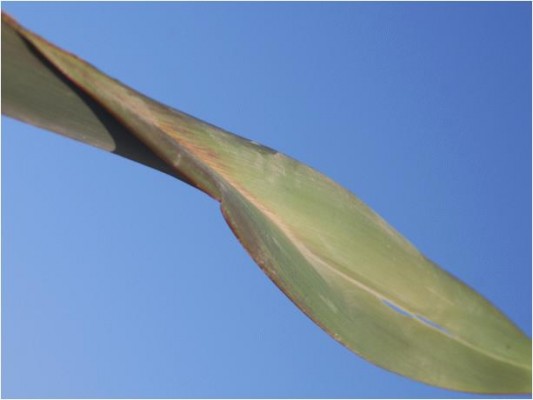 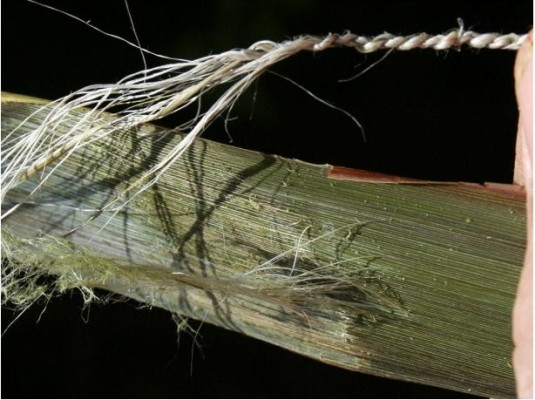 Fig. 1.3.3: A large number of fine, strong fibers may be obtained after scraping the hard tissue from the leaf surface. 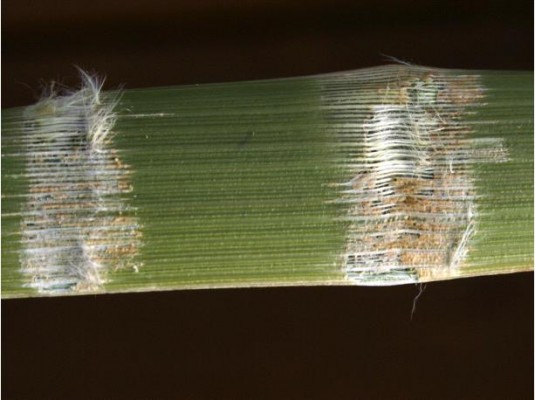 Fig. 1.3.4: Scraping the leaf surface down to the fibers is part of the process of obtaining the raw material used in preparing the ceremonial Maori skirts. 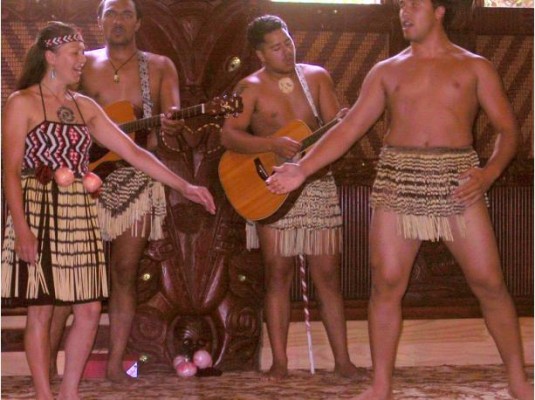 Fig. 1.3.5: Skirts made of Phormium leaves being worn in performance before tourists in New Zealand. 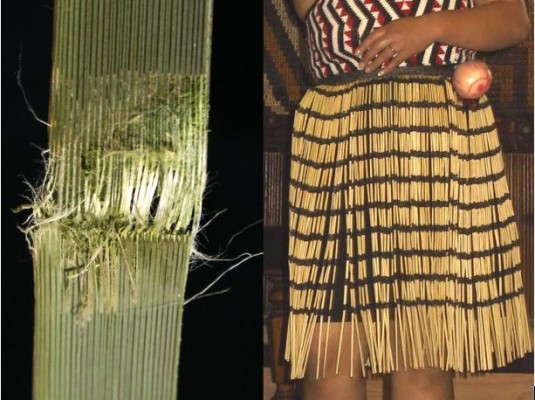 Fig. 1.3.6: In close-up the construction of the skirt may be seen: “scraped” leaves at regular intervals, that have rolled up into cylinders after drying out.

The Ebro river is one of the largest rivers in Spain, draining into the Mediterranean Sea some 200 km south of Barcelona. In July 2008 I was invited to teach in a summer course at the University of Barcelona. I used that opportunity to extend my studies of the distribution of Arundo species, and searched for them at the Ebro delta area. Finding Arundo mediterranea there justified again my earlier decision to name the rediscovered species after the whole area of distribution. My hosts drove me to the area. The endless rice fields, raised on black turf soils (Fig. 1.3.7), with their dark-green color, attract all attention. Out of the corner of my eye, I recognized a tuft of Phormium. Arriving at the second tuft (Fig. 1.3.8) I asked to stop, picked two leaves for discussing the matters with my hosts and drove on. When we arrived at the third tuft, also near a greenhouse, I gave my hosts strings I had made from the Phormium fibers, as souvenirs from our mutual excursion. One of my hosts was Manolo Arufat, who was born and grew up in the delta region. He showed us the principal use of the Phormium in that area; the leaf is split into long green strips and used to bind the leaves of “lettuce heads” on their way to the market or the supermarket. Each farmer plants a tuft of Phormium in the corner of his field and the delivery of lettuce tied with these natural green strips is assured for many years. 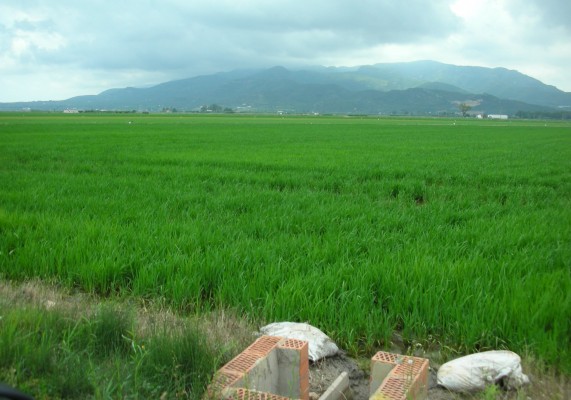 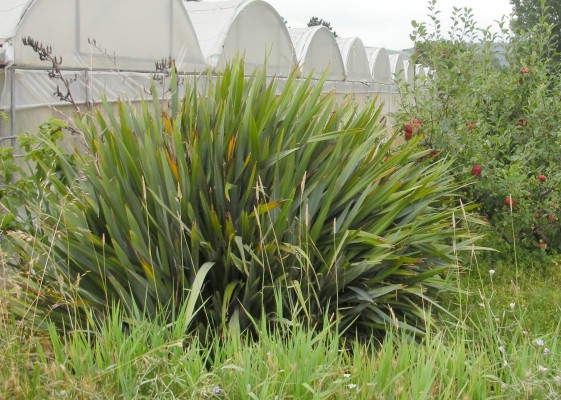 There are several species of Typha in Israel, but for our purposes (strings and ropes) they may be considered as one. Typha differs from (הקנה) in that its leaves are long, resembling a fencing foil, (some consider this to be the source of the name in Hebrew). The leaf is rich in fine fibers, but because of its special leaf anatomy, it is advisable to split the leaf and allow it to dry a little, for several hours, then to divide it into many longitudinal strips. When opened, the leaf displays the beautiful construction of its air-retaining tissue (=aerenchyme). Oxygen-deficiency in the root-zone of the cattail, as in other plants that grow in water, is withstood by the activity of this tissue. When the fibers are split and dried out a little, the air-retaining tissue collapses and the fibers become stronger. 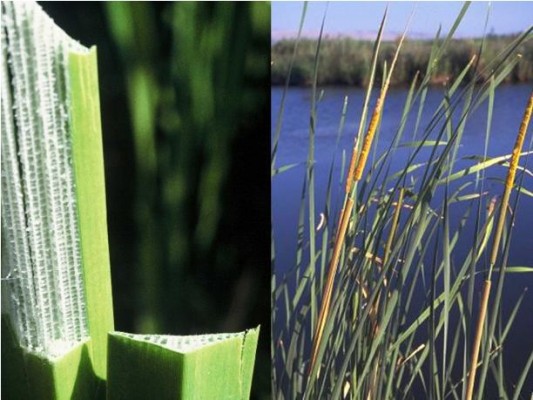 Fig. 1.3.9: Right: Typha domingensis, amongst the commonest plants on the water-logged banks of rivers and lakes; left: leaf sections of Typha elephantina. 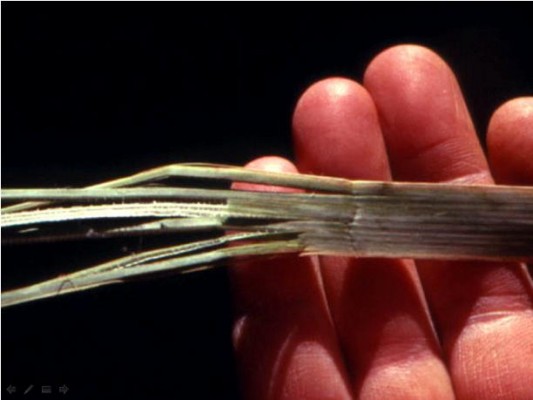 Fig. 1.3.10: Splitting of a cattail leaf to prepare fibers for plying string; the longitudinal parallel form of these white fine fibers facilitate the splitting of the leaf and the preparation of the fibers. 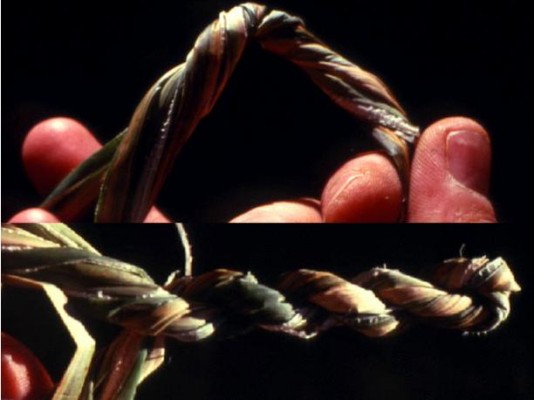 Fig. 1.3.11: Twisting a group of fibers and beginning to fold it before plying the two ends; the ends plied into string and the addition of fibers to the “V” shaped part of the two components (near the fingers in the lower photo).