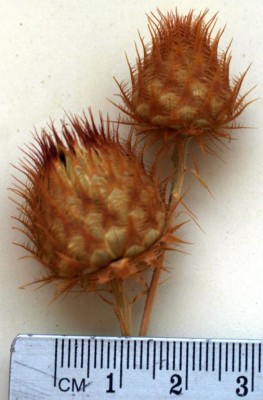 At the outlet of Nahal Hayon from the ‘Uvda Valley northwards, there is a large area of loessial soil covering the stony substratum. The shrubby vegetation is sparse and Anabasis articulata, with all individuals alive, covers 1-5% of the area. Among the shrubs, after floods with efficient spreading of the water (Fig. 6.1.23), a continuous carpet of annuals (Figs. 6.1.24-6.1.27) develops. A section of Nahal Hayon, 10 km long, surprised every one who was used to seeing the extremely dry landscape of the southern Negev. Dams made by the Bedouin from soil and shrub parts are constructed in similar water courses (wadis) in central Sinai and used for agriculture. I have viewed such terraces from the air, but I do not know what the Bedouin raised there, plowing with their camels. 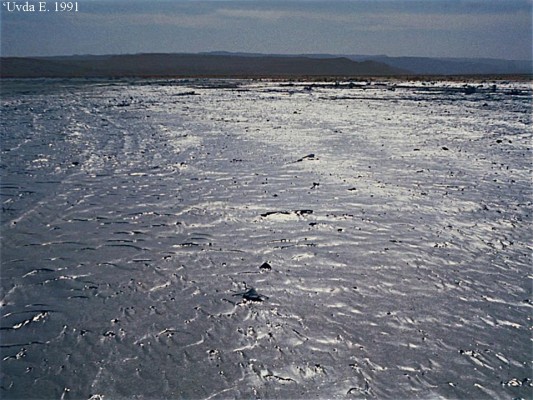 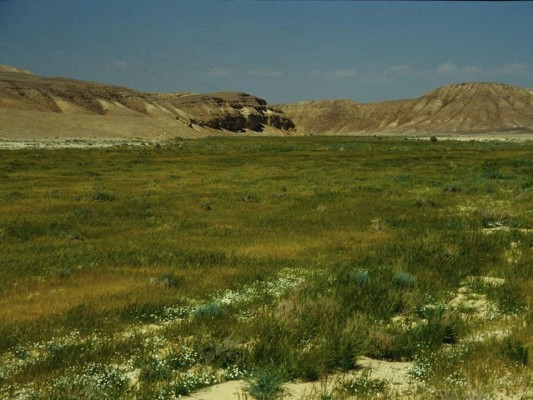 Fig.6.1.24: Wealth of annual palnts after a flood in the eastern Biq’at ‘Uvda, on Nahal Hayon (photograph – U.Avner) 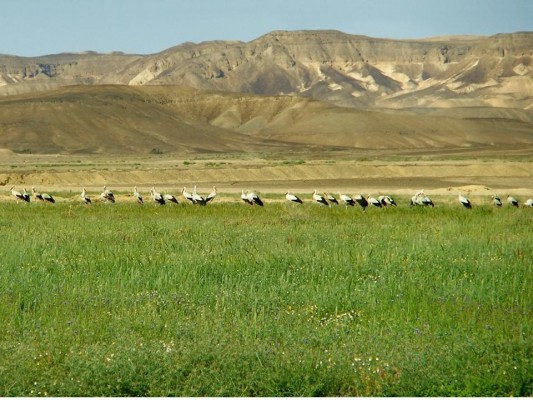 Fig.6.1.25: Even the storks are overwhelmed having green grass in the extreme desert (photograph – U.Avner) 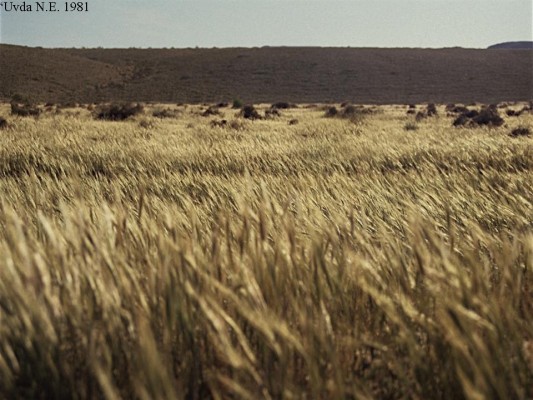 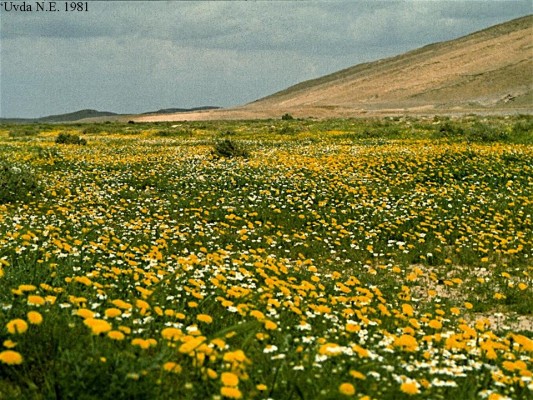 Erosion of sand and dust from the hill slopes by wind and water, down into the valleys, led to the formation of soil-rich valleys. The sandy-loessial texture brings about a relatively good moisture regime, leading to the development of dense shrubby vegetation. Water penetration into sandy soils is more efficient than into fine-grained soil, and the water holding-capacity of the sandy-loess soil is better than that of pure sand. A long history of sedimentation and the erosion of various components caused heterogenic substratum in the wide wadi’s floor. Today it is hard to explain the dominance of various species without specific analyses of soil profile. The main shrubby plants found as dominants in various patches in the wide valleys of the Shayarot Ridge are: Anabasis articulata, Traganum nudatum, Gymnocarpos decander, Artemisia monosperma, Crotalaria aegyptiaca, Retama raetam, Haloxylon persicum, Ochradenus baccatus and Ephedra aphylla.

The common trees are Acacia pachyceras and Acacia raddiana. Occasional trees of the Australian Acacia salicifolia escaped cultivation around the military airport at the valley center and now grow in wadis. 15 years of drought caused the death of around 90% of the shrubs in the area. There are sections in the wide wadis where most shrubs survived from reasons hard to explain without soil analysis and a study of local flood history. There is a good chance that these surviving shrubs will assist the return of the species to the areas where they perished during the drought years. Seed vitality of Anabasis articulata is short and there is no other way of survival of the species in the extreme desert areas. The rain of 2010 brought germination and development of Zilla spinosa and Pulicaria incisa which continued to grow to a large size, a rare occurrence in these areas. We assume that in 2011 they used water that had not been used earlier by other plants (Fig. 6.1.32).

Common dwarf shrubs that accompany the above shrubs are Fagonia arabica, Fagonia mollis and Asteriscus graveolens. The annual plants that accompanied the dwarf shrubs in 2010 and their remnants are still found in the area: Plantago cylindrica, Centaurea pallescens, Anastatica hierochuntica, Erucaria rostrata, and Erucaria pinnata.

Haloxylon persicum grows in Israel in deep sands and in the sandy soils of the extreme desert. Most specimens of this species occur in the Arava Valley and a minority near Biq’at ‘Uvda, in a few of the wadis crossing the Shayarot Ridge. The vegetation cover in the mobile sands of Nahal Kasouy is relatively high and during the years preceding 1994 there were areas dominated by H. persicum (Fig. 6.1.28). Its main adaptation to desert dunes is its ability to produce a deep root system in the sands. When the plant becomes covered by sand except for its canopy, it survives this period and revives after the sand is removed. If the sand cover is total, the buried plant may die. A second reason for the death of H. persicum trees or shrubs: dozens of individuals died during the 15 drought years in the wadis of Shayarot Ridge.

During the rainy year of 1994, sandy areas with weak sand movement were covered with dense carpets of Eremobium aegyptiacum (Figs. 6.1.29-6.1.31). The effective rain of 2010 in Nahal Kasouy brought about germination, growth, and flowering of E. aegyptiacum in sandy areas there. In 2011 a few plants of E. aegyptiacum which started their life in 2010, continued to develop and looked like small shrubs of perennial plants. 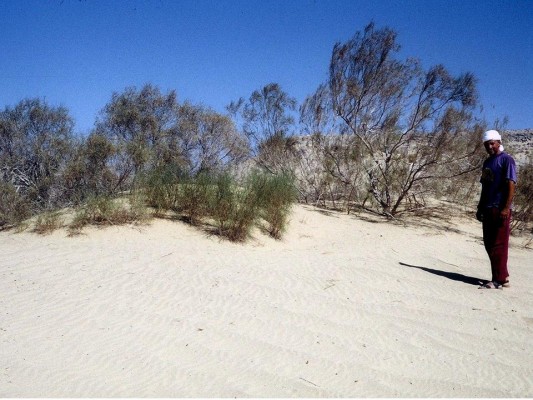 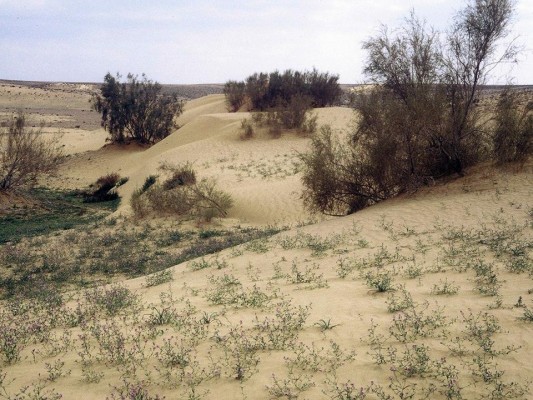 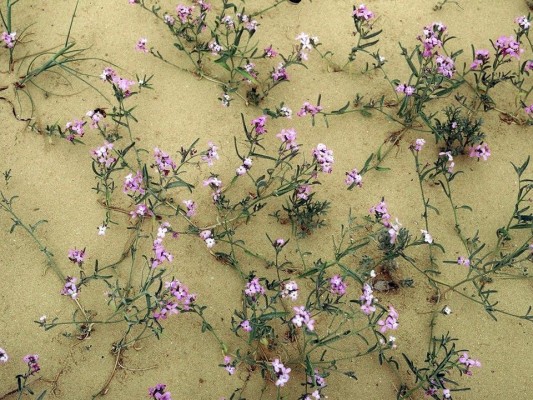 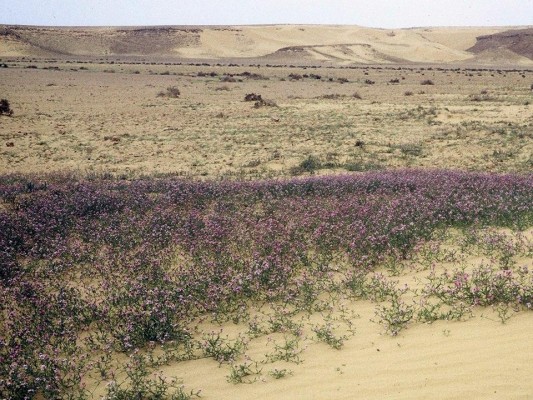 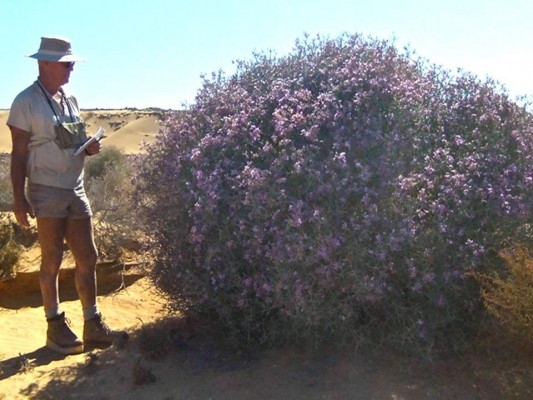