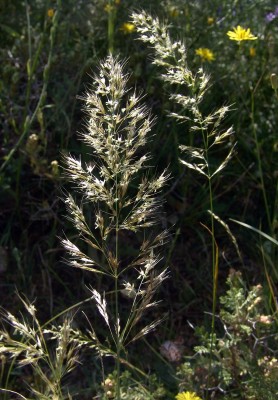 In most areas of the Negev Highlands, the Judean Desert, Sinai, and southwestern Jordan that receive 80-250 mm. mean annual rainfall, semi-shrubs grow in a diffused pattern, creating shrub-steppes. The most common dominants in these steppes are Artemisia sieberi, Noaea mucronata, and Gymnocarpos decander. During the spring of rainy years, the shrub-steppes may look like ornamental gardens with flowering tulips (Fig. 1.3.64, 1.3.65), Iris species and others. The phytomass produced by annuals in these plant communities on stony-rocky shallow soils is always rather small when compared with that of fine-grained, deep soils (Fig. 1.3.66). The latter soil types hold much of their water close to the soil surface; hence a lot of it is lost through direct evaporation.

The minute quantities of salts (8 ppm.) carried by clouds and later by rain from the Mediterranean Sea climate systems remain in the soil and accumulate there (Yaalon, 1963). The soil may therefore be too dry or too saline for the growth of annuals in normal or dry years but in rainy years, after efficient leaching of the soil, plant communities dominated by a single annual salt-resistant species develop above the leached saline soil. These species include Spergularia diandra and Gymnarrhena micrantha (Fig. 1.3.67), Mesembryanthemum nodiflorum (Fig. 1.3.68), Aizoon hispanicum, and Nasturtiopsis coronopifolia (Fig. 1.3.69). 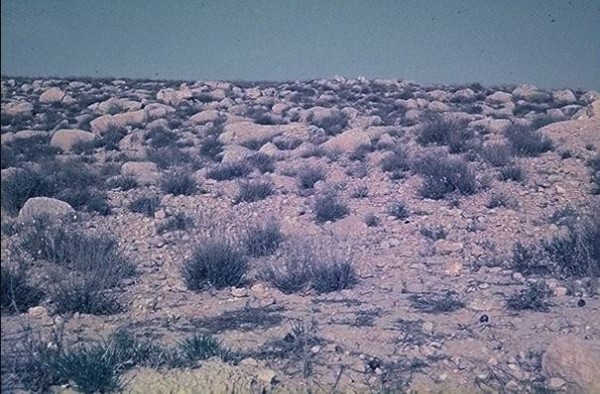 Fig. 1.3.62: A shrub-steppe dominated by Artemisia sieberi in the winter of a dry year. Near Borot Loz. 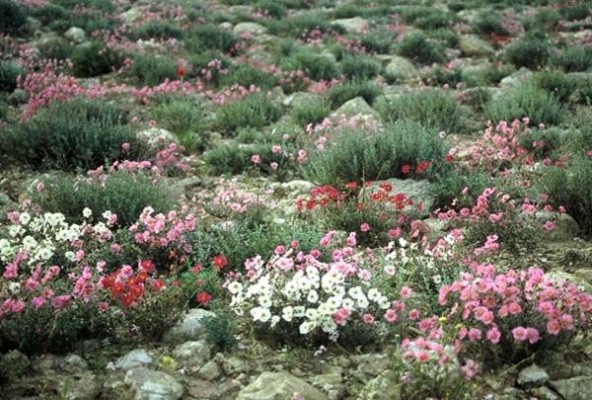 Fig. 1.3.63: A shrub-steppe dominated by Artemisia sieberi accompanied by Helianthemum vesicarium in a rainy year. Near Borot Loz. 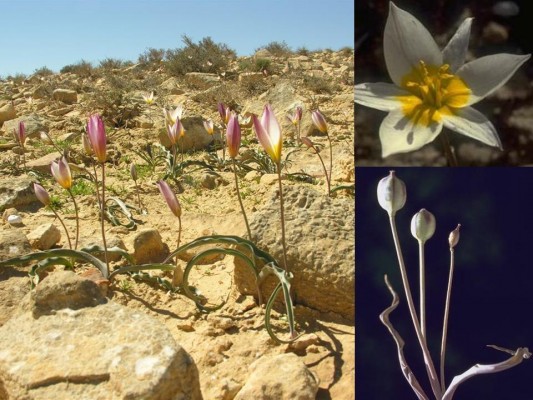 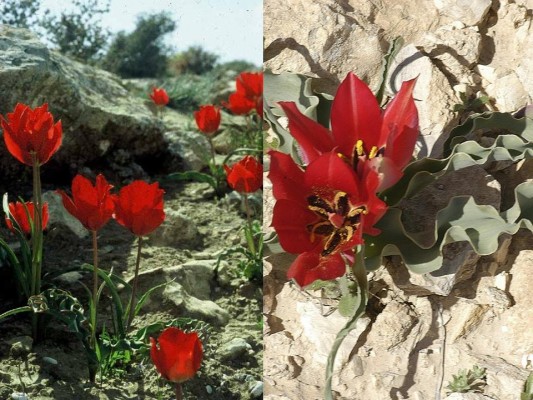 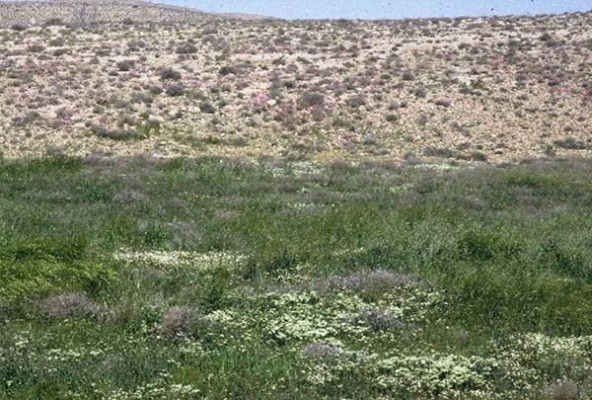 Fig. 1.3.66: A shrub-steppe dominated by Artemisia sieberi accompanied by Helianthemum vesicarium in a rainy year. Deep soil in the valley is covered by rich herbaceous vegetation. Parts of the richness is influenced by flood water. 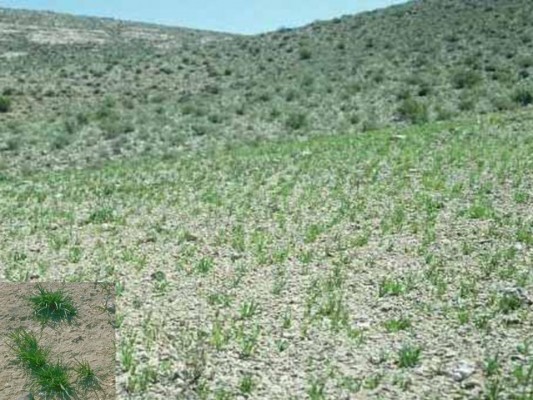 Fig. 1.3.67: A deep saline soil near Sede Boqer in a rainy year. The dominant is Gymnarrhena micrantha – a salt-resistant plant. 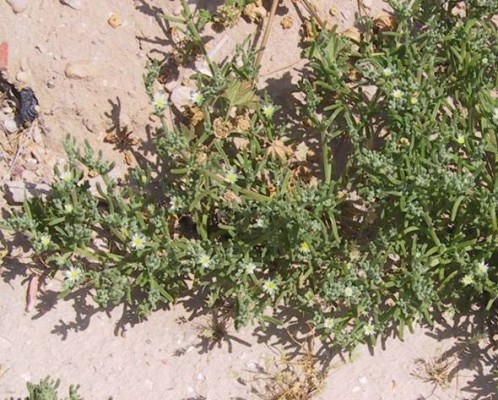 Fig. 1.3.68: Mesembryanthemum nodiflorum on saline soil near Jericho; it is a salt-resistant plant. 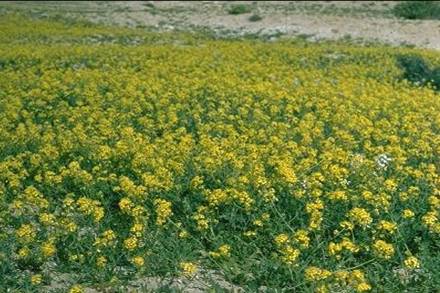 Nearly monospecific communities of semi-shrubs exist, each of them best adapted to the local, specific saline conditions (Danin, 1978). The most common dominants in these conditions are Reaumuria hirtella (Figs. 1.3.70, 1.3.71), Reaumuria negevensis, Salsola vermiculata (Fig. 1.3.72), Bassia arabica, and Atriplex glauca on chalk- and marl-derived soils; Peganum harmala, Anabasis syriaca and Haloxylon scoparium (Fig. 1.3.73) are the shrubby dominants on loess-derived soils. During dry years these areas are almost devoid of any plant cover. In rainy years, however, beautifully showy geophytes such as Leontice leontopetalum (Fig. 1.3.74) and Ixiolirion tataricum (Fig. 1.3.75) thrive. In areas where bits of sand weres sedimented together, the loess may resemble a flower garden in the valleys among shrub-steppe hills (Fig. 1.3.76). Areas that have been plowed shallowly and planted with wheat or barley become contaminated with weed communities typified by Achillea santolina (Fig. 1.3.77) and Hyoscyamus reticulatus (Fig. 1.3.78). 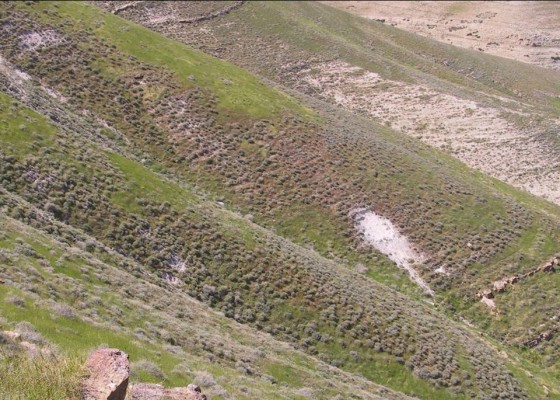 Fig. 1.3.70: Slopes of the Judean Desert descending to Nahal Prath (Wadi Qilt) near Kefar Adummim. The chalk outcrops are dominated by Reaumuria hirtella. 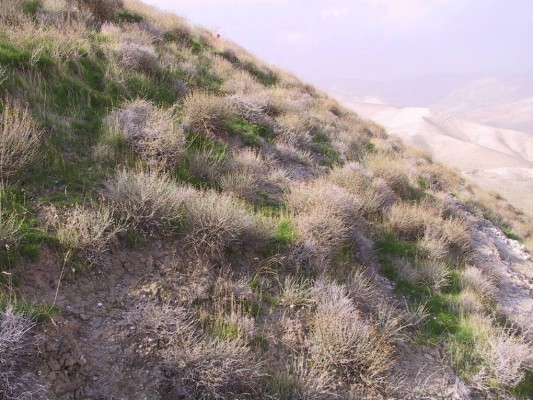 Fig. 1.3.71: Diffused vegetation dominated by Reaumuria hirtella. The leached soil among the shrubs is covered by a carpet of natural lawn of Poa eigii. 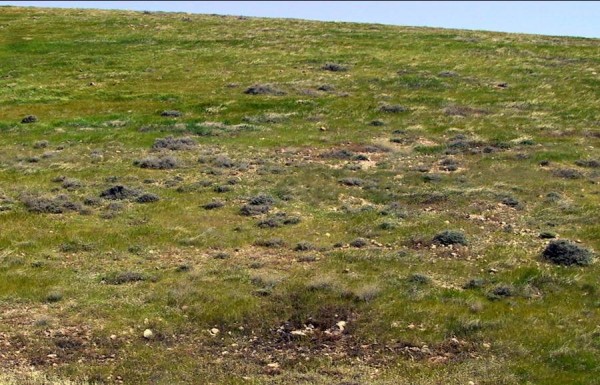 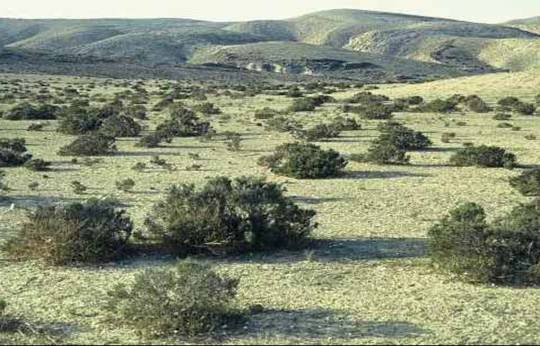 Fig. 1.3.73: Diffused vegetation dominated by Haloxylon scoparium on loessial soil at a wadi-terrace of Nahal Revivim near Yerokham. 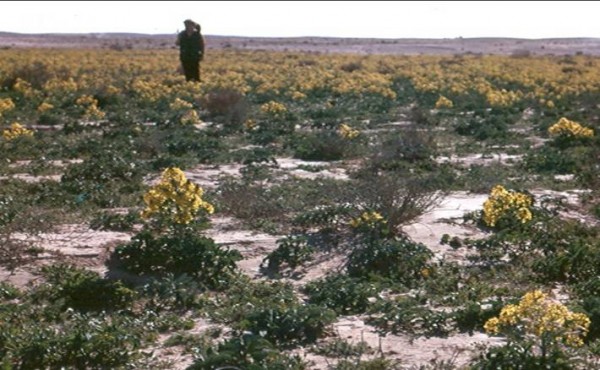 Fig. 1.3.74: Leontice leontopetalum on loessial soil. A geophyte of loessial soils of the shrub-steppe areas; became a weed in wheat and barley fields due to its pre-adaptation to fields plowed superficially. 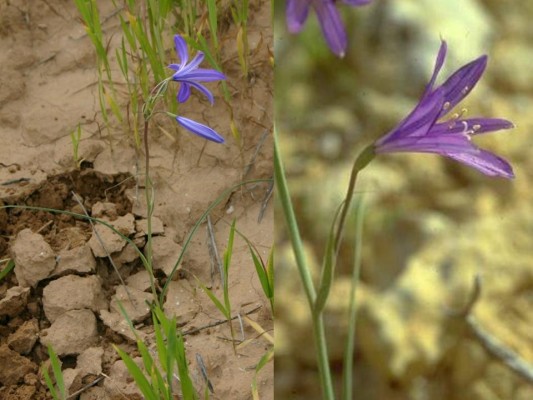 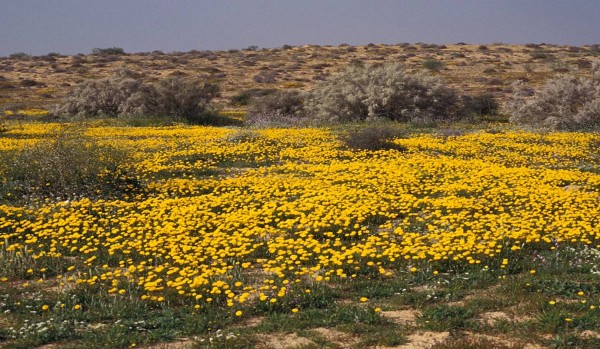 Fig. 1.3.76: Loessial-sandy soil in a valley near Nizzana in a rainy year with carpets of Picris radicata. Shrubs of Retama raetam bloom along a small wadi. 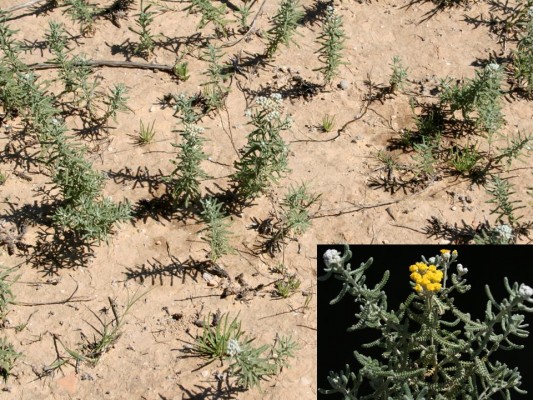 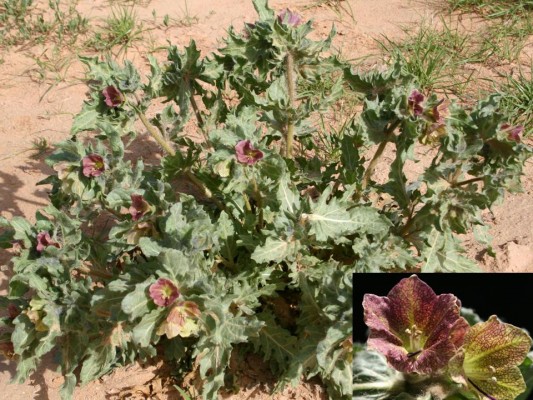 Outcrops of smooth-faced hard limestone (Fig. 1.3.79) support plants that may differ a great deal from those on other soil types. On such outcrops, the vegetation is typically characterized by Chiliadenus iphionoides,  C. montanus, Globularia arabica, Stachys aegyptiaca, Polygala negevensis, Tanacetum sinaicum, and Capparis aegyptia. Isolated populations of dozens of Mediterranean relics and many rare desert plants are found in these habitats in the Negev, the Judean Desert, Sinai, and Jordan. The semi-shrub Sarcopoterium spinosum, and the geophytes Narcissus tazetta (Fig. 1.3.80) and Sternbergia clusiana (Fig. 1.3.81) represent this phenomenon in the Negev (Danin, 1972, 1983, 1999), and several new species have been discovered there (Fig. 1.3.82). 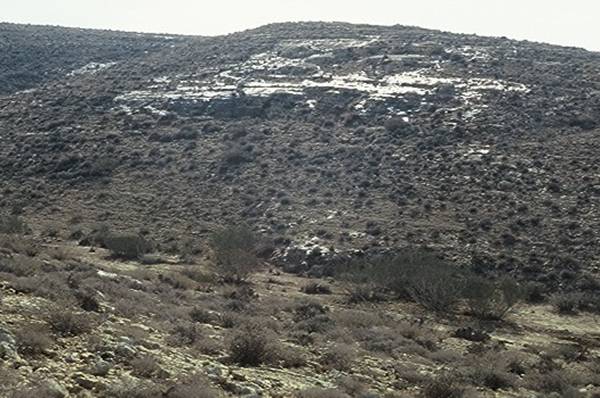 Fig. 1.3.79: A smooth-faced rock outcrop near Mash’abbe Sade glitter while light rain is falling. The minute depressions become filled with water running off to soil pockets and to the area below the rock. 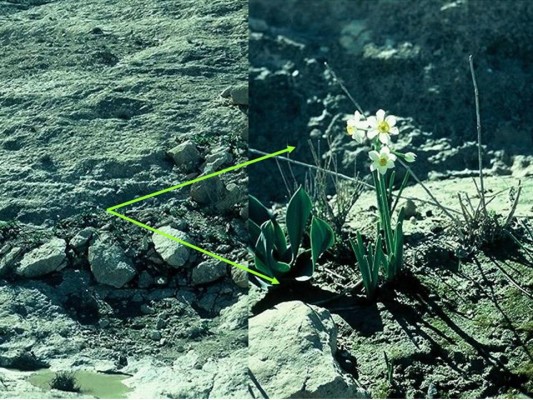 Fig. 1.3.80: A smooth-faced rock outcrop at Nahal Mis’ad, where Narcissus tazetta survived from times in the far past, when Mediterranean climate prevailed in the area. 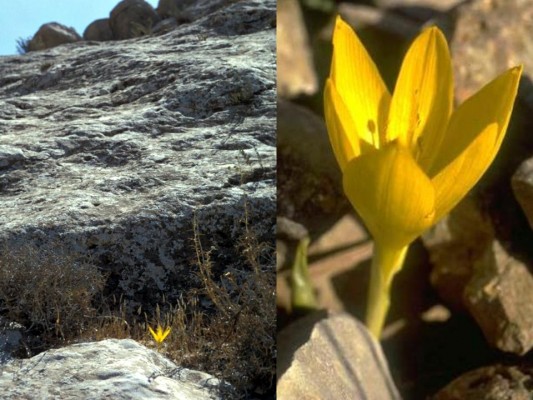 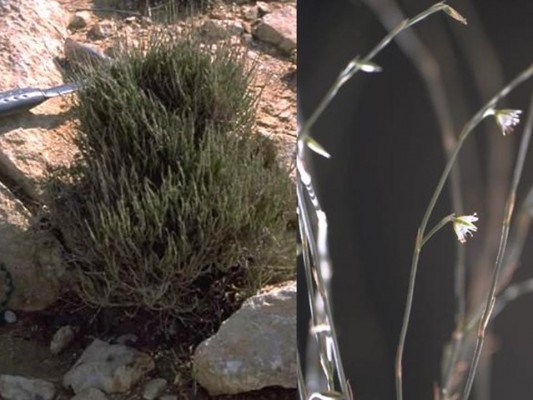 Shrubs of Retama raetam and Achillea fragrantissima are the dominants in hard limestone wadis. Atriplex halimus prevails in this kind of habitat, where the catchment area is built up from the salty soils on chalk, clay or marl. At lower elevations Acacia raddiana (Fig. 1.3.83), A. pachyceras, Tamarix nilotica (Fig. 1.3.84), and T. aphylla occur as well. Many small springs exist in the limestone hills of western Sinai and the sandstone hills of southwest Jordan. Most of these springs can be detected from afar by their date palms (Phoenix dactylifera), which are confined to sites with high water tables of fresh water. The palms are accompanied by Nitraria retusa, Juncus arabicus, Phragmites australis, and Cressa cretica (Fig. 1.3.85). In many wadis there are canyons, which may have long-lasting pools supplied by floodwaters; these support a rich flora of hydrophytes such as Zannichellia palustris and Potamogeton spp., and green algae such as Chara spp. 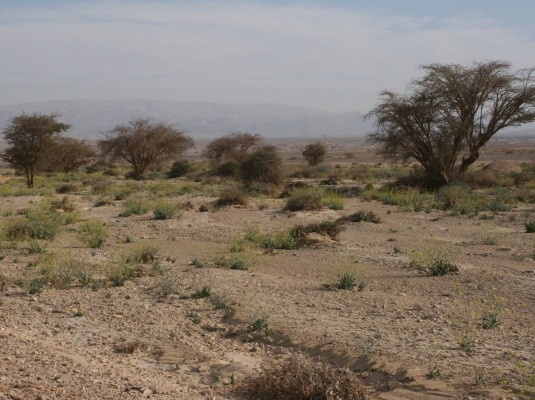 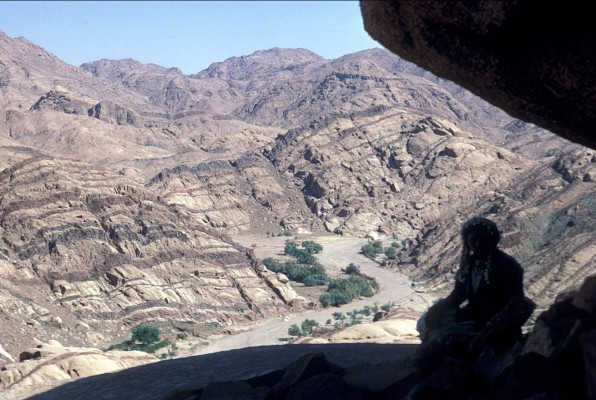 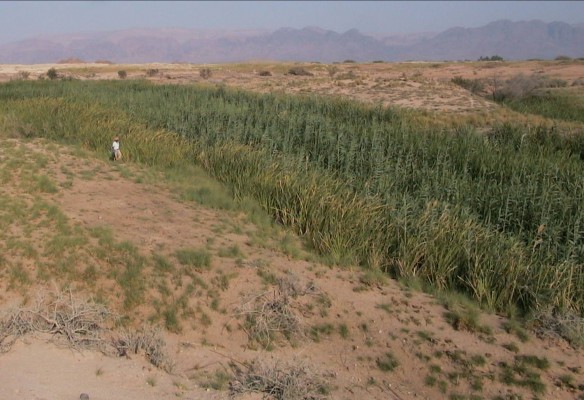