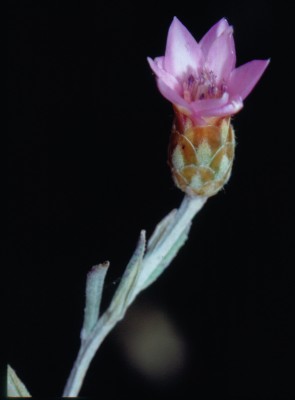 Sand dunes or sand sheets occur in Israel on the Mediterranean coastal plain, in the western Negev (as a continuation of the norther Sinai sands), a few valleys of the northeastern Negev, and in the Arava Valley (Figs. 1.3.109-1.3.111). Each of these areas has a different climatic regime and sand texture; hence the vegetation and its developmental processes also differ. Much of this vegetation has been discussed in previous publications (Danin et al., 1964, Danin 1988a, 1995, 1996b, 1996c). Therefore we will briefly discuss here only the sand vegetation of southern Jordan. In the Rotem-Yamin plain, 7-10 km southeast of Dimona, Calligonum comosum dominates the vegetation where the sand is more than 5 m. deep (Danin et al. 1964; Fig. 1.2.6). Anabasis articulata prevails in sites where the sand is 1-5 m. deep. Annuals typified by Anastatica hierochuntica and Erodium oxyrhynchum occur in sites where the Tertiary sandstone is exposed and almost devoid of shrubs. Zygophyllum dumosum prevails where Tertiary conglomerate with dark chert pebbles is exposed. 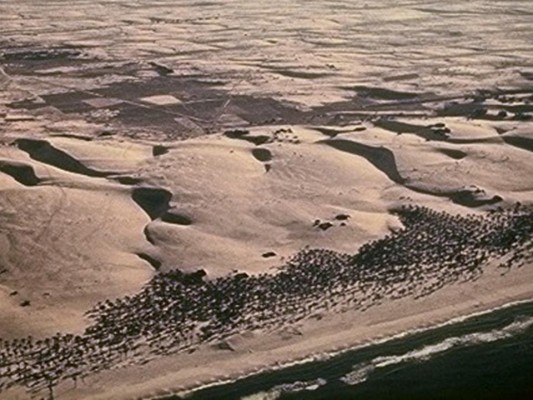 Fig. 1.3.109: Dunes of young sand near Rafa, Gaza area. The sand was transported by currents in the Mediterranean Sea from northern Egypt, invaded the land when dried and transported eastwards by winds. Compare to units 3 & 4 in Fig. 1.3.111. 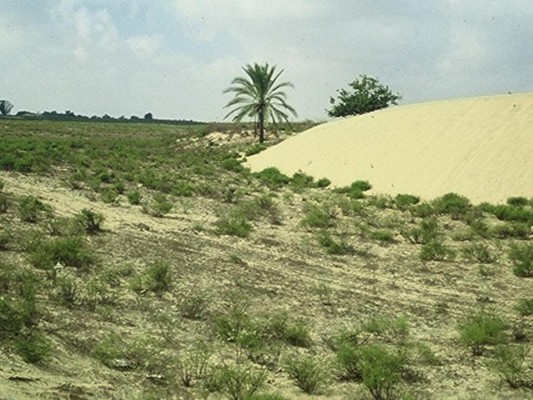 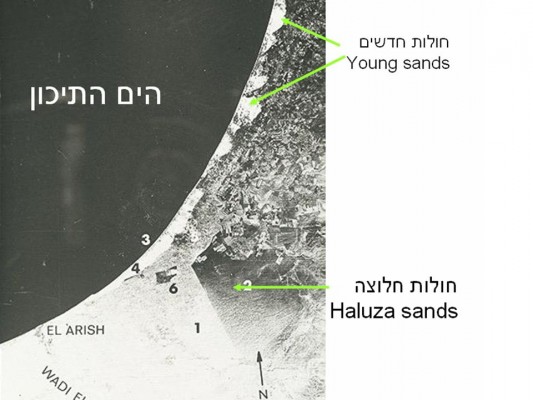 Fig. 1.3.111: Satellite image of the coastal plain of southern Israel and north-eastern Sianai: 1. trampled and over-grazed sandy areas of NE Sinai 2. Haluza sands covered with a dark microbiotic crust, protected from grazing and trampling 3. Date palms at the Mediterranean beach 4. dunes of young sand at the beach near Rafa 5. Orchard groves planted in southern Gaza area 6. An area fenced in the 1970s is thus protected from cutting, grazing, and trampling.

The sands of the Arava Valley are derived from the weathering of Nubian sandstones in Edom (Fig. 1.3.112). Where the sand is sufficiently deep, the relatively high water table in the Arava enables the successful development of the tall shrub Haloxylon persicum (Fig. 1.3.113). Most stands of this plant in Israel disappeared when their environment was converted into intensively irrigated agricultural land. However, Haloxylon persicum still grows widely in the Arava and the southeastern desert of Jordan (Al Eisawi, 1996). Large areas of Haloxylon persicum can also be seen in eastern Sinai, and smaller areas in Wadi el-Haj in the western Sinai. Sand mobility is high in a few of these places, but most of these sandy areas are stable. The common semi-shrubs and shrubs growing in the Mediterranean sands are Artemisia monosperma and Retama raetam (Fig. 1.3.115, 1.3.116); sandy desert areas host Haloxylon salicornicum and Salsola cyclophylla. In wadis that cross the sandy areas are large plants of Haloxylon persicum, Retama raetam, and Calligonum comosum, as well as occasional Tamarix aphylla trees covered by sand mounds that may reach a height of about 5 m. 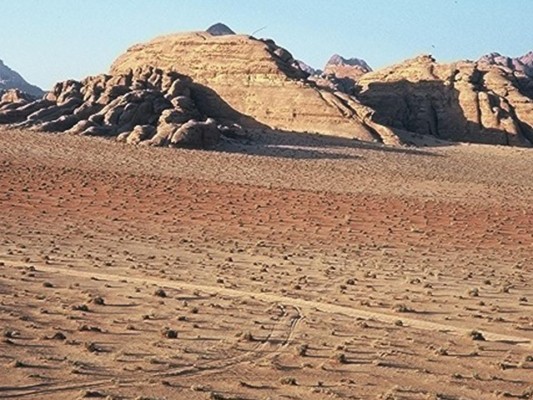 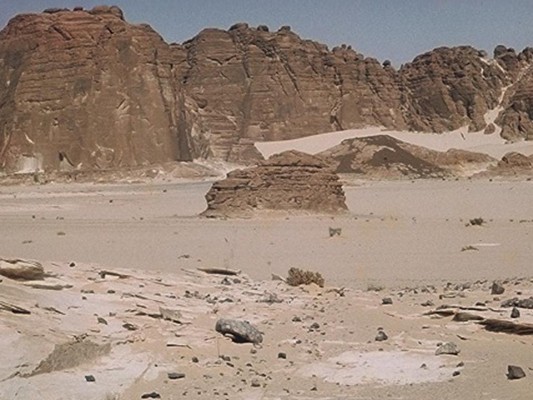 Fig. 1.3.113: Old sandstone in southern Sinai and the sand formed by its weathering and accumulation in valleys.

Steep and isolated sandstone hills which protrude from large flat valleys filled with stable sand typify the Wadi Rum area of southern Jordan. Huge areas of sand sheets there are dominated by Haloxylon salicornicum, Anabasis articulata (Fig. 1.3.110), and occasional patches of Haloxylon persicum where the sand is slightly mobile and deeper than in the areas dominated by the two others. Similar landscapes occur in the sandstone plateau of southern Sinai (Fig. 1.3.113). Artemisia jordanica, similar to Artemisia monosperma, occurs in a few places in the Wadi Rum area. The latter is characterized by dissected glabrous leaves; the former has non-dissected, hairy whitish leaves. Many generations of botanists in Jordan and Saudi Arabia erroneously referred to Artemisia jordanica as Artemisia monosperma. 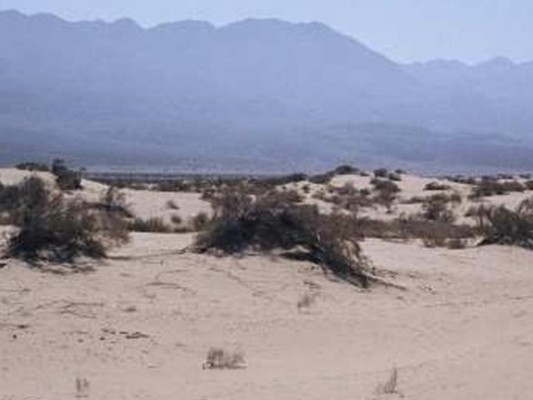 Fig. 1.3.114: Sand formed by weathering of old sandstone in Jordan, accumulated in the Arava Valley and became populated by Haloxylon persicum. 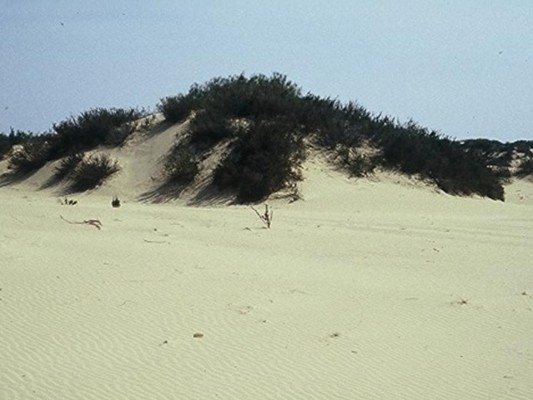 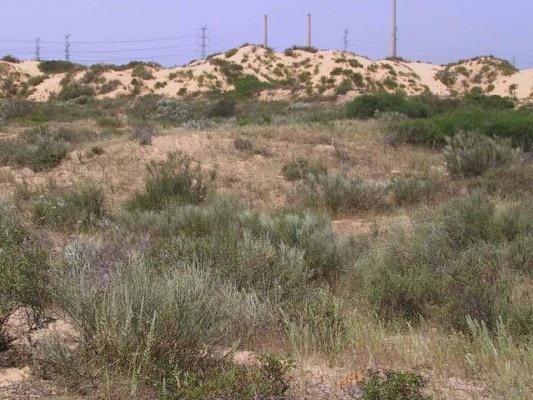 The sandstone hills of southwestern Jordan (Edom) support many relic Mediterranean species and rare endemic species. Of particular interest is the vegetation in the vicinity of the contact zone between the sandstone and the Precambrian crystalline rocks (Barsotti & Cavalli 1989).