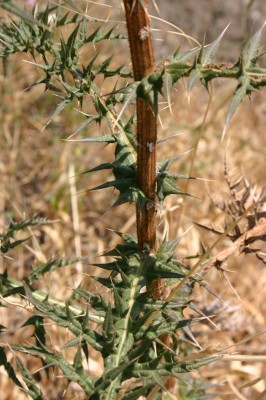 Ruins testify to past settlement and a high likelihood of water

Ruins of ancient habitation sites may be detected by “ruderal plants” (in the dictionary one finds – ruderal = of garbage heaps) which prefer soils rich in nutrients One should keep in mind that human existence in a settlement in ancient times was usually dependent upon finding a local water source. This could be a spring, a well, or a cistern. The use of channels and long pipelines over great distances was not common practice for small villages. Humans had a profound impact on their environment long ago by enriching it with waste materials rich in nutrients (today we call it “environmental pollution”). Plants that have become adapted to growing in nutrient-rich environments may function as ruderal plants in human-induced habitats. Plants growing in proximity to ant-nests, and benefiting from their “threshing zone” have become adapted to ruderal habitats. 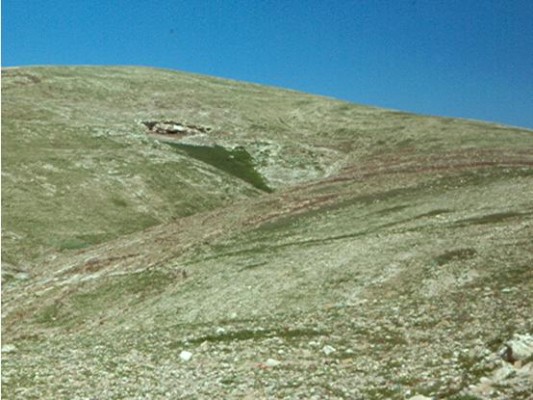 Fig. 4.6.1: A conspicuous carpet of dark-colored ruderal vegetation at the foot of a cave. When Bedouin are in the area, their herds stay in this cave. 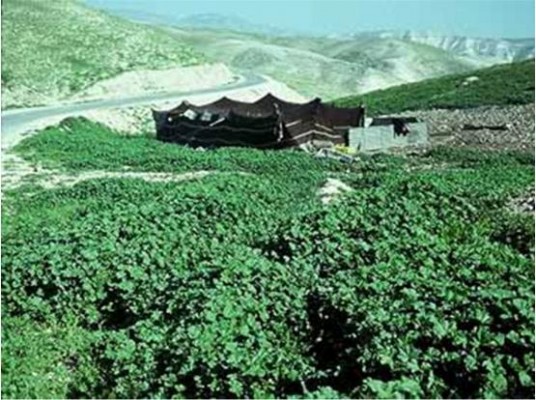 Fig. 4.6.2: Near Kfar Adumim: a Bedouin encampment on a carpet of Malva parviflora, developing on ground rich in nutrients from the herd’s droppings.

The identity of plants living on the ruins depends much on the antiquity of the site or the length of time that has passed since the excrement of domestic animals was exposed to the soil surface. During the winter in the Judean Desert encampment sites of Bedouin with their sheep and goats may be seen from afar (Fig. 4.6.1). Near the caves to which the shepherds led their animals, the plants that utilize the soil fertilized by these domestic animals develop into large specimens with dark green leaves. The dominant plants in these sites are Malva parviflora (Figs. 4.6.2-4.6.3) and Urtica pilulifera (Figs. 4.6.4-4.6.6). These tasty herbs have high nutritional value and we shall return to them later when we deal with edible plants, where they will “replace” spinach. Many years after the site is abandoned and the addition of manure ceases, other ruderal plants replace the pioneers. 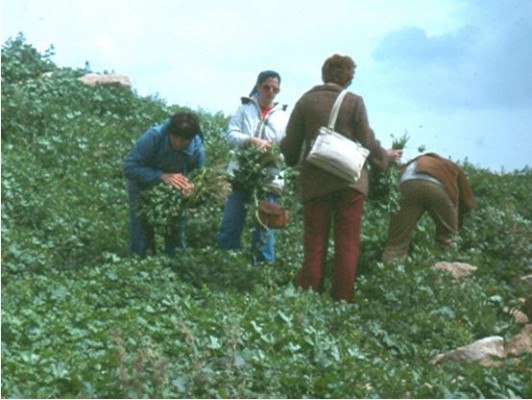 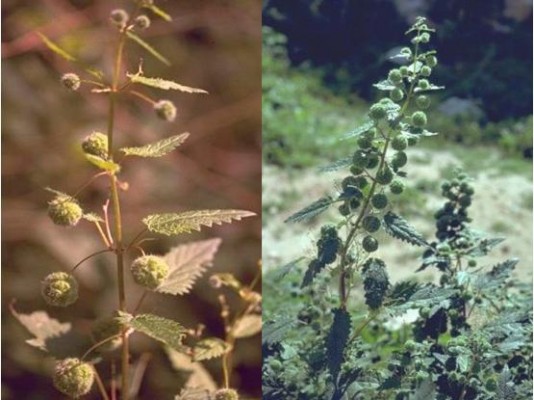 Fig. 4.6.4: Urtica pilulifera is a ruderal plant (of garbage heaps). Its presence hints at a considerable presence of human beings and their herds in the past. Permanent residence of humans demands a water supply. 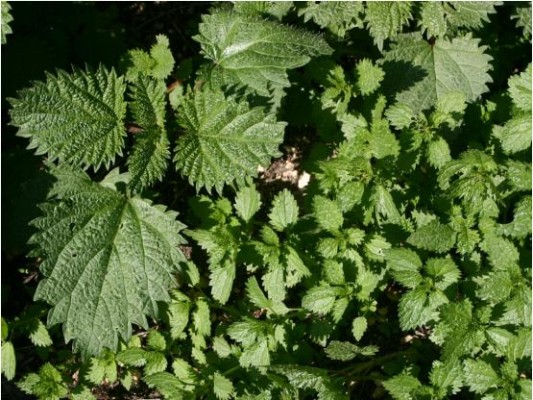 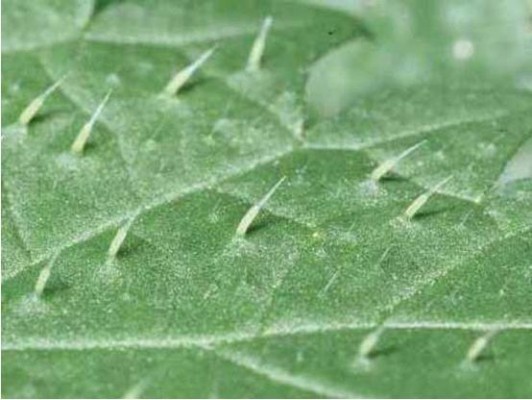 Fig. 4.6.6: Before approaching an Urtica plant it is worthwhile noting the special hairs that look like a syringe with a sharp needle and a reservoir of stinging material. 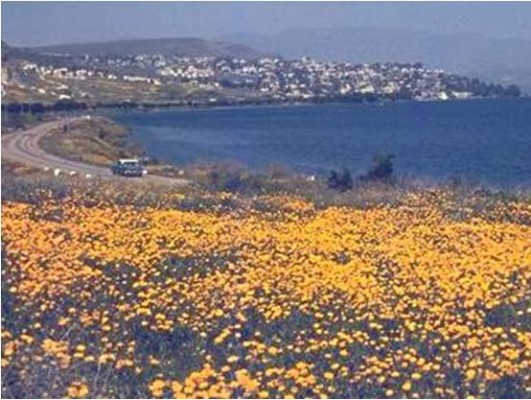 Fig. 4.6.7: Chrysanthemum coronarium growing on ruins on the banks of the Sea of Galilee.

Chrysanthemum coronarium (Fig. 4.6.7-4.6.9) is a plant that paints areas of ruins yellow-orange, and may be seen from a great distance even dozens of years after the area has been abandoned. The adaptation of C. coronarium to fertile soil seems to have evolved through its mutual existence with harvesting ants. It grows in circles on nests (Fig. 4.6.10) and since this species responds well to fertile soil, the area it dominates follows the “threshing zone” shape of the nest. Hence, long before humans started polluting the open fields, C. coronarium was already responding well to nutrient-rich ground (Fig. 4.6.11). 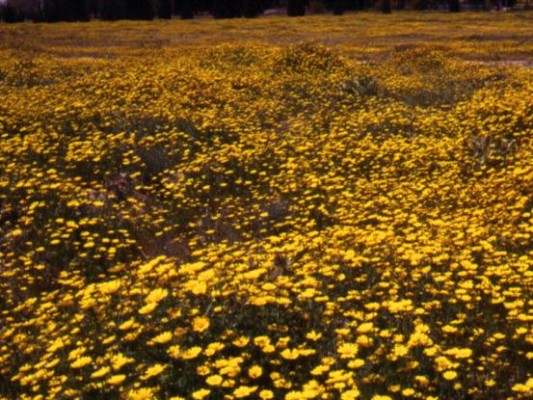 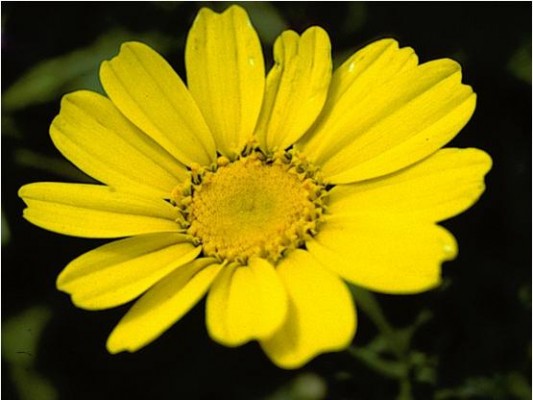 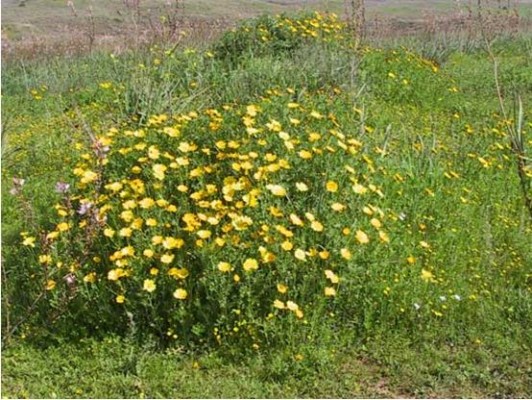 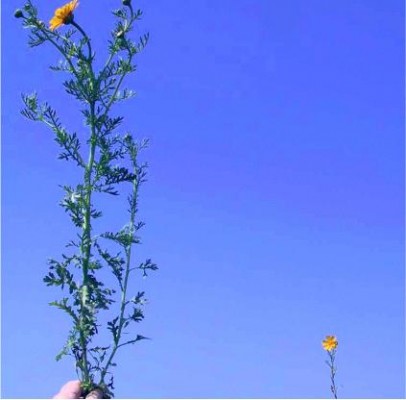 Onopordum cynarocephalum (Fig. 4.6.12) is a plant found in ancient archaeological sites like Tel Bet Shemesh and Tel Kadesh (between Yiftakh and Malkiyah). Sinapis alba (Figs. 4.6.13-4.6.14) also declares its ruderal nature from afar and continues to grow on soils of ruins and garbage many years after pollution has ceased. 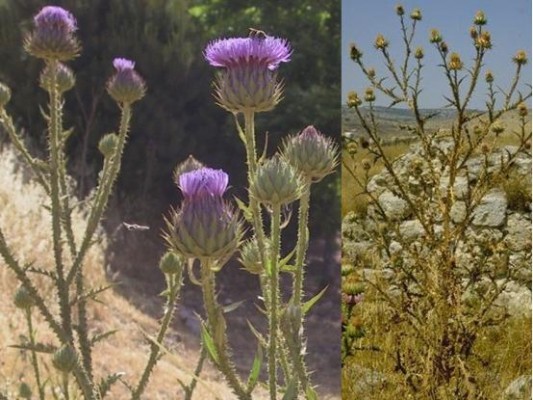 Fig. 4.6.12: Onopordum cynarocephalum grows in the rainy part of the country on the soil of ruins. The right-hand photo is in Tel Bet Shemesh. 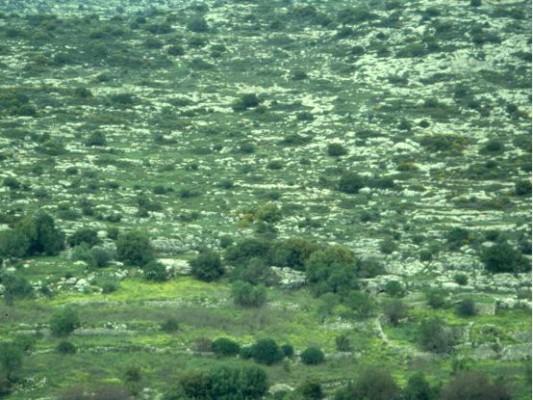 Fig. 4.6.13: Sinapis alba on the soil of ruins near an old village in the Judean Mts. 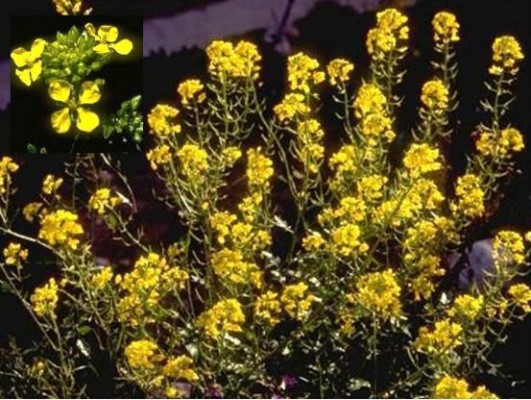 When discussing “the broken reed” I expressed my admiration of the prophets’ observations and their knowledge of the natural history of Israel, as mentioned in the Bible. The prophets were aided by processes well known to the public at that time. In the above chapter we were dealing with changes in the vegetation after the human site was abandoned. With the passage of time, well known processes take place. Isaiah (34, 13) declares: “And thorns shall come up in her palaces…” The translators were short on knowledge and did not know the real identity of plants so they mentioned only the spiny nature of the SIRIM (the Hebrew name of Sarcopoterium spinosum).

The meaning of the sentence in Hebrew, combined with botanical knowledge, is in fact a very harsh ecological curse. The process Isaiah is forecasting is as follows: nettle (Urtica) and mallow (Malva) will grow on the soil of the destroyed palaces. After the abandoned soil has undergone a lengthy period of leaching by rain water, Chrysanthemum coronarium and Sinapis alba will take their place. Many years later, after additional leaching, Onopordum cynarocephalum will grow. Many years after the establishment of Onopordum, the polluting influence of the palace ruins will disappear. At this stage, Sarcopoterium spinosum, which cannot compete against ruderal plants on fertile soil, may now establish itself. Isaiah continues, using the ecological adaptation of the plants mentioned, saying in only a few words that the soil of the former palace will not rest, but will be plowed and weeds will grow instead of the cultivars.

Ancient Cisterns in the Negev