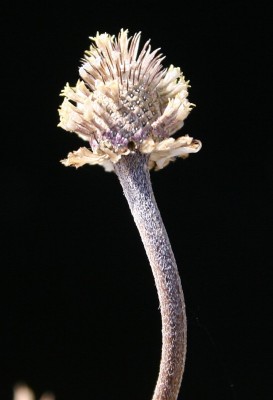 $big
A visit to distant relatives 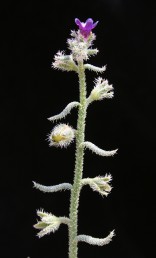 In my work with Israeli plants, I feel close to many of them. Traveling to the Negev Highlands on April 10th and 11th, I felt that on such a long journey, I met many ‘relatives.’ I want to discuss some of my ‘relatives’ here. Hormuzakia negevensis is endemic to Israel (found only in Israel), and is the rarest of the endemic plants. The entire worldwide population of this plant numbers only a few dozen and these are found on 1-2 dunams in the south-west Yamin Plane (Hebrew: Mishor Yamin). Since discovering it, unknown to science, in 1994, I fear it is now in danger of extinction. It grows close to the edges of a dirt road leading to an army camp, and the widening of this road by only one meter will destroy about 5 clumps of this rare plant. I fear that there are not many nature preservers amongst the few people who know this plant. I heard rumors that the south of Yamin Plane is to be damaged, and on my short visit I saw vehicles ‘dangerous’ to nature standing in the area. Don’t say afterwards “We didn’t know” – it can be seen clearly, now. 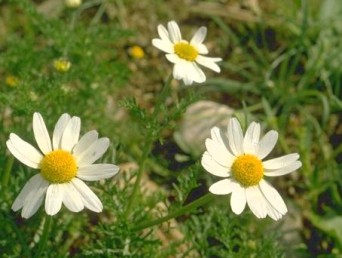 The road all along the Plane of Winds (Hebrew: Mishor HaRuhot) is carpeted with annual plants, amongst them rare names such as Lasiopogon muscoides, Eremopyrum distans and Eremopyrum bonaepartis. This year, Anthemis pseudocotula has “taken over” wide areas along the length of Nahal Nitzana, replacing carpets of Hordeum spontaneum which were here previously. These two Mediterranean species retain memories of damp periods in which Sternbergia clusiana, Sarcopoterium spinosum, Narcissus tazetta and Prasium majus penetrated into the Negev Highlands. But ‘memory’ is one thing, and carpets of Anthemis such as those on the Golan are a much more convincing statement of the nature of the country. I advised my friends to go and see this beautiful sight, and they suspected that I was hiding from them hundreds of Ixiolirion tataricum flowers along the entire way. 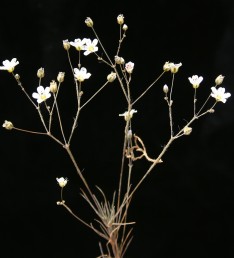 But Ixiolirion is not the rarest in the Negev Highlands and my hope of meeting Minuartia sinaica again, beside Borot Lotz, was also fulfilled. 1983 was a rainy year, like this year, and neighboring habitats such as stretches of loess, lacking vegetation in regular years, were painted with light green. Here a few Minuartia sinaica appeared, with short petals and small leaves. In 1983 I photographed their seeds by Scanning Electron Microscope (SEM) and compared them to their closely related species Minuartia picta. It then became clear to me that they deserve to be separated at the species level. A researcher who did not see the populations of these Minuartia species in the field, unjustifiably lowered Minuartia sinaica to the level of synonym. The combination of field observation and laboratory enabled me to reach the correct conclusion (in my opinion) and to publish it in the appropriate international literature. Since then, Minuartia sinaica has become my ‘close relative’ away from home. 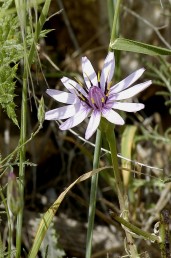 At this time of Independence Day, Scorzonera papposa that flowers abundantly around Borot Lotz has great significance. Bedouins in the northern Negev taught me that the roots, leaves and inflorescence may be eaten. During the War of Independence, as a young Jerusalemite, Malva parviflora and Foeniculum vulgare were an important part of our diet. When I learned of the benefits of Scorzonera I regretted not knowing this in my youth, because we could have varied our diet with a sweetish salad, or with the roots, that taste like roast potatoes when roasted. In my youth, to fill in what was lacking, I would gather Scorzonera leaves from the Givat Ram slopes in the direction of Beit Hakerem, to add to our family salad. I never dreamed that I would ever say, “Plants once grew in Emek Tzion.” Jerusalem is developing and the plants exist now only in the memories of the pensioners.