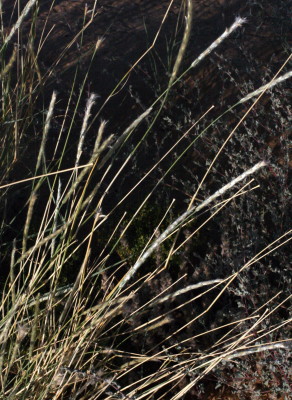 The Dead Sea Valley has an exceptional temperature regime in our area. In all the temperature maps of our area the Dead Sea Valley looks like a long narrow tongue of tropical regime that penetrates northwards (Fig. 8.1.3, right). Trees and shrubs of tropical origin grow in habitats that have a sufficient quantity of water. En Gedi spring (Fig. 8.1.45) represents a good example of the special situation having a combination of sufficient water with a suitable hot temperature regime. A partial list of the trees includes: Ziziphus spina-christi, Acacia raddiana, Acacia tortilis, Maerua crassifolia, Cordia sinensis, and Salvadora persica. The trees grow also in large wadis. A. tortilis (Figs. 8.1.46, 8.1.47) reaches not far from En Gedi, its northernmost location in the world. Most A. tortilis trees grow in Israel in the hottest places. A. raddiana (Figs. 8.1.48, 8.1.49) is resistant to colder weather than A. tortilis and is therefore more common throughout the country.

Most A. raddiana trees have one or two trunks (Fig. 8.1.48) whereas A. tortilis has several trunks (Fig. 8.1.46). The inflorescences of the two acacias may develop in their blooming season (the end of our summer) even without leaves. The leaves and young stems of A. raddiana are glabrous (Fig. 8.1.50) whereas in A. tortilis these organs are hairy. The three projections on the leaf axis (Fig. 8.1.50) are extra-floral nectaries. In unique species of Acacia living in symbiosis with ants in Central America and in East Africa, the nectar is provided as a reward to the ants. The thorns on the Acacia stems are stipular thorns and appear in pairs. I do not know of a proper explanation for the function of straight thorns (as in the center of Fig. 8.1.51) versus the short hooked one (ends of the stem in Fig. 8.1.51). In some places straight thorns occur and in others there are no such thorns.

The Acacia trees are accompanied by desert shrubs and rare Sudanian vines such as Pergularia tomentosa (Fig. 8.1.52) and Cocculus pendulus. Capparis aegyptia is the bluish shrub (Fig. 8.1.53) that accompanies the A. raddiana in the Dead Sea Valley. It grows on cliffs and in large pebbly wadis. C. aegyptia is an evergreen shrub; in summer its leaves become thick and are covered with wax. The whitish-bluish color rejects solar radiation better than the green color. The difference between summer- and winter leaves is clear in February when the new sprouting and blooming starts (Fig. 8.1.54). In the afternoon hours the flowers of this caper are completely opened (Fig. 8.1.55). 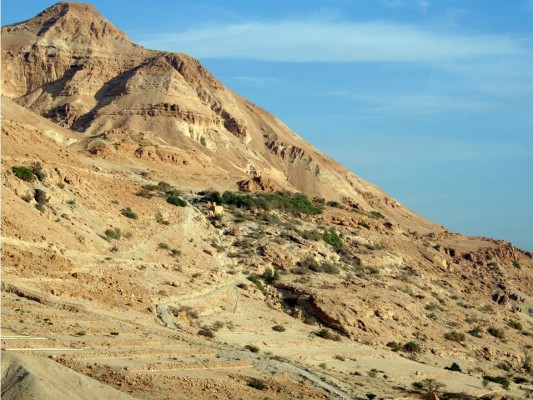 Fig.8.1.45: En Gedi spring with Sudanian trees around it. The trees receive fresh water and enjoy the warm climate of the Dead Sea Valley 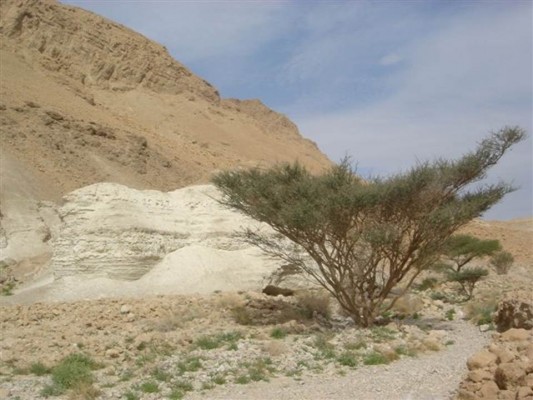 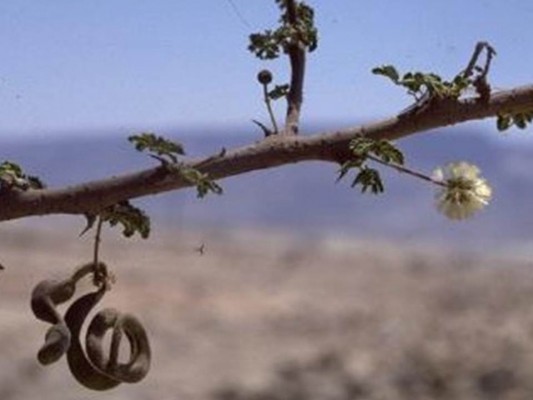 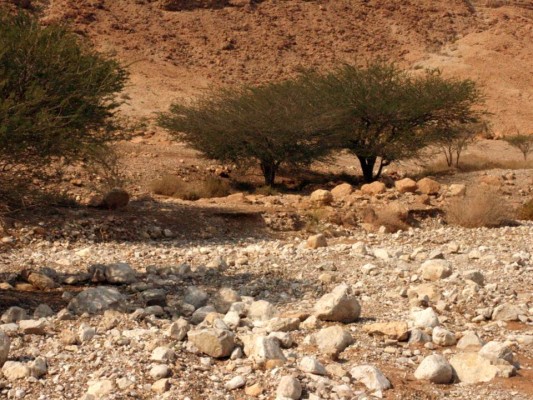 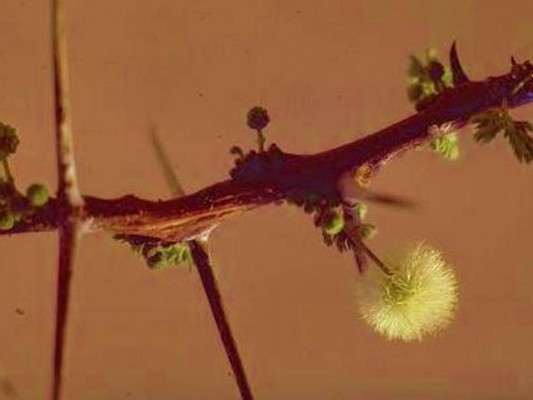 Fig.8.1.49: Acacia raddiana blooming with minute leaves. According to studies of Gideon Halevy, the Sudanian Acacia trees continue blooming here in the season when summer rains fall in their homeland 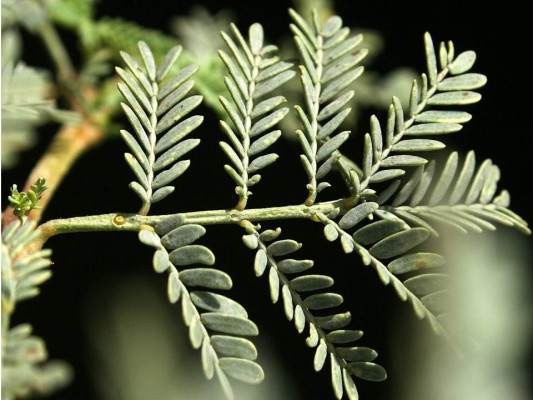 Fig.8.1.50: A compound leaf of Acacia raddiana. It is glabrous and has three extra-floral nectaries in depressions of the main leaf axis 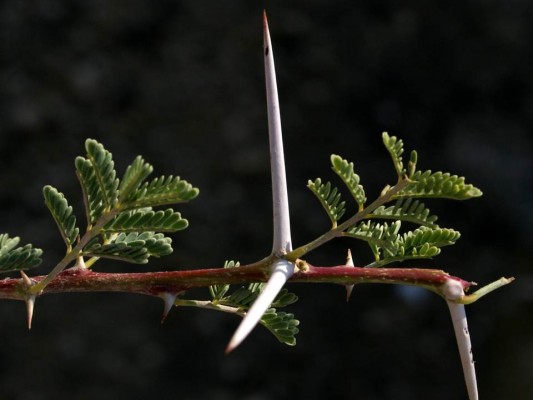 Fig.8.1.51: A branch of Acacia raddiana. A pair of thorns, which are regarded as derived from stipules, is seen at the base of each leaf; the thorns are long and straight or short and hooked 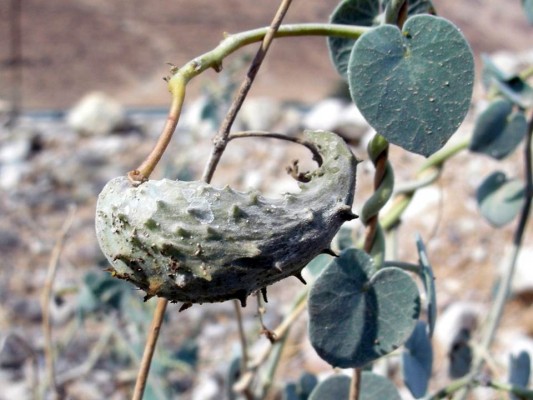 Fig.8.1.52: Pergularia tomentosa carrying a fruit. A stem right of the fruit is twisted around the dry stem supporting it 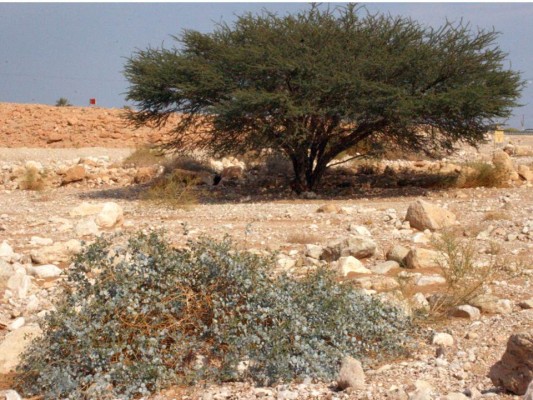 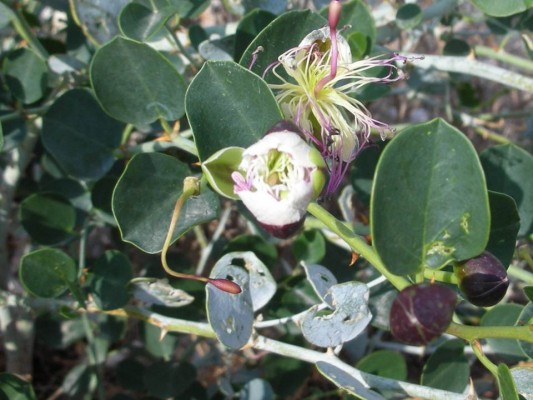 Fig.8.1.54: Beginning of Capparis aegyptia blooming. The flowers develop on branches with young thin, green leaves. The bluish leaves of the previous year, covered with wax, are thick and affected by insects during their year-long activity 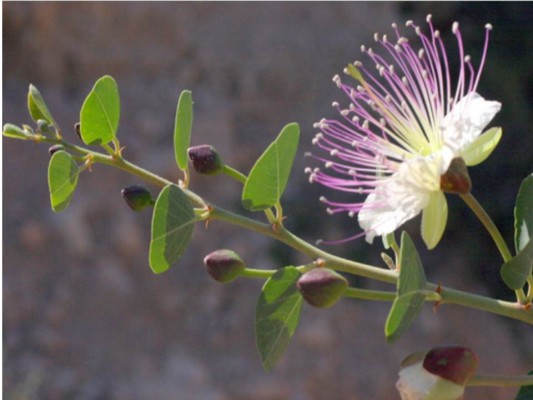