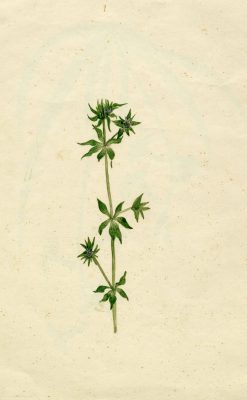 After becoming used to the gray color of most rocks in the rock reserve, the orange tips of several large boulders become prominent (Figs. 2.1.10-2.1.12). This color becomes brighter after a rain shower. These are the observation points of small birds, and they naturally select the highest sites for this purpose. While standing on the rock they add their excrement to the rock and change the nutrient content of that area. Epilithic lichens belonging to the genus Caloplaca, capable of growing well in such nutrient-rich sites, grow successfully and make typical patches. This situation may also be found under desert conditions. 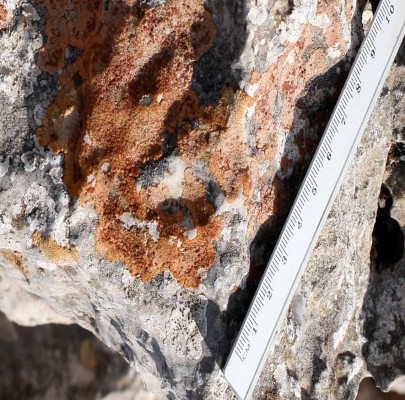 Fig. 2.1.10: The orange-colored tip of one of the highest rock boulders in the rock reserve. 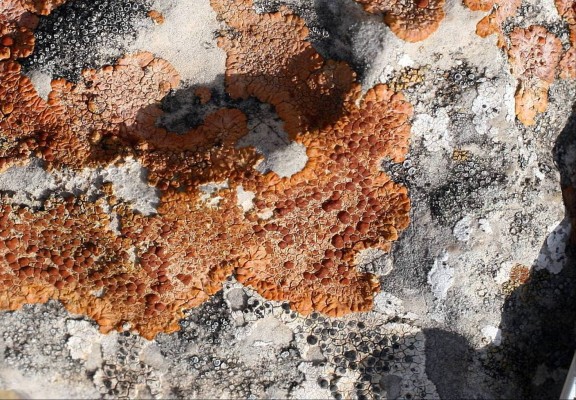 Fig. 2.1.11: A lichen of the genus Caloplaca abounds at the top of a high rock. This lichen is successful in nutrient-rich sites. 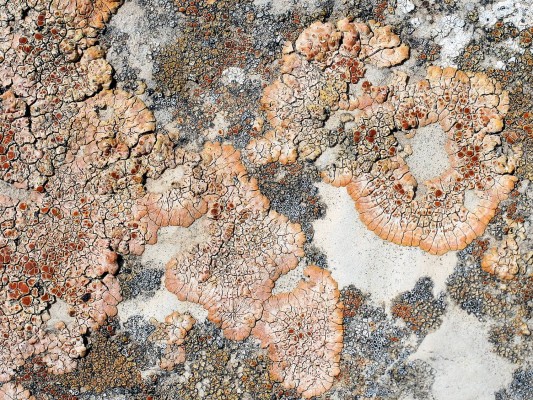 Fig. 2.1.12: Close-up of a Caloplaca. The dark circles are fruiting bodies.

Many people consider the soil as the insoluble component of rocks. That is, after dissolution of the soluble components of the rock, the soil comprises the insoluble part. During the period when the destruction of the primary landscape was just beginning, we studied the microbiotic weathering at Ramat Bet HaKerem. This enabled us to conclude that a considerable part of the Terra Rossa, typical of the Judean Mts. and other parts of the country, is derived from air-borne desert dust. There is a comprehensive presentation of this issue in [usefulplantsf13 "Plant Stories" chapter F, section 13].

Examining large boulders, such as those found in "The rock reserve," where the soil has been removed from the boulders' bases, the soil line is clearly visible. Above ground there are plenty of lichens and cyanobacteria which make the populated rock appear darker. Below the ground line the rock is lighter or has a reddish color. We were surprised to discover weathering marks caused by endolithic lichens at a depth of 5-50cm. The latter grow only on rock outcrops which are fully exposed to solar radiation. Clearly, the soil surface was once lower than it is at present. Soil covering the rock could take place in several ways: 1. Soil erosion from neighboring areas and its deposition near the rock. This cannot be the case in Ramat Bet HaKerem because it is a flat plateau. Water percolates vertically without any horizontal flow. 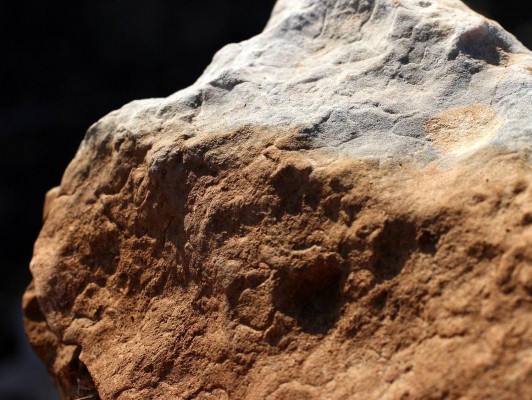 Fig. 2.1.13: The lower half of this stone was situated inside the soil. In the past this part was exposed to the sun and became weathered by nedolithic lichens.

2. Soil accumulation cannot be explained by dissolving rocks. The insoluble component of Vradim formation is so low that a layer 200 m thick would have to be dissolved to form a 50 cm thick layer of soil. If this was the case, the weathering patterns induced by the lichens, that are less than 1 mm deep (Fig. 2.1.13), would have been dissolved and removed long ago. 3. The clay origin is in desert dust that reaches the entire area of the country as a 0.1 mm thick layer per year = 1 mm in 10 years, 1 cm in 100 years, and 50 cm in 5,000 years. However 40% of the dust is carbonates and we can estimate roughly that it would take 10,000 years, in today's climate, to make 50 cm of Terra Rossa from desert dust. Studies carried out in other countries also proved that the origin of the clay in the Terra Rossa is air-borne dust (eolian origin). The question remains: why are we always told that Terra Rossa formation is created on hard limestone and dolomite rocks? The answer is that an efficient drainage system is needed, like that of karstic rocks, to change yellowish desert dust poor in clays and rich in calcium carbonate, into Terra Rossa. The latter is rich in clays, reddish (with iron oxides of a complicate composition), and almost devoid of calcium carbonate. Today, as in the past, desert dust arrives during specific climatic events and becomes deposited all over the area. Plants, lichen, and mosses trap this dust and grow above it. Dust that was deposited on rocks is carried out to the soil pockets by water streaming on the rock, and soil formation processes take place in these soil pockets.

Comparing the vegetation of Israel with the climatic conditions of western Jerusalem, it is reasonable to assume that in the distant past, Mediterranean maquis covered Ramat Bet HaKerem. Trees of Styrax officinalis, Crataegus aronia and Rhamnus lycioides growing here are indicators for the former maquis in that area. The list of trees included Quercus calliprinos and Pistacia palaestina which grew there until removed by the dense urbanization of the hill. Additional indicators are the typical vines of the maquis found in this area at present. The weathering of the rocks discussed above takes place in sites totally exposed to radiation. Therefore, one may assume that at least for the last few hundreds or thousands of years the maquis was naturally sparce or became so by man-made depletion.

Styrax officinalis is the most common tree in the rock reserve (Fig. 2.1.14). It was the dominant tree in this land before the destruction of the area. Fishermen in the coastal plain told me that they use the S. officinalis for fishing as follows: they put crushed fruits (Fig. 2.1.15) into isolated ponds on the beach. The fish entering these ponds become intoxicated and float on the surface. This is not a recommendation for fishing, but an example of the "medicinal" properties which provided the name for this tree. Being on a high point in the area, various birds stand on its canopy and use it as an "observation tower." Many small birds in this area consume the juicy fruits of vines in the maquis. A small project that I used to give the students attending my course: they had to make a list of plants growing below trees and shrubs. Summing up the results of a whole group of observations enabled us to draw conclusions on seed dispersal by birds. 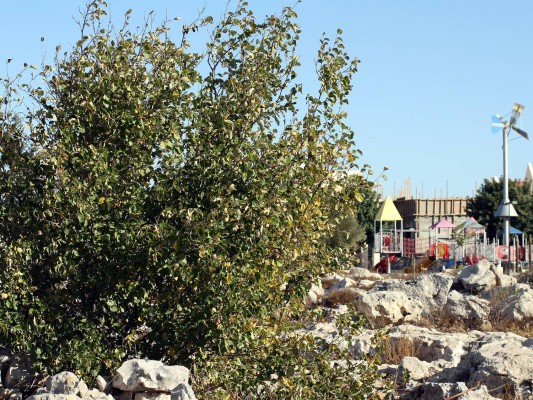 Fig. 2.1.14: A Styrax officinalis tree – a remnant of the maquis which formerly prevailed in the area. Vines of various species grow below and climb up the tree. 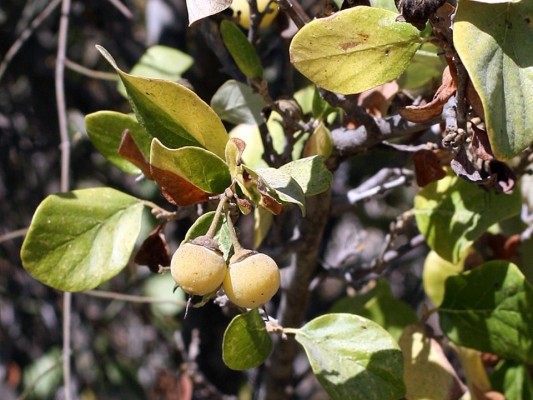 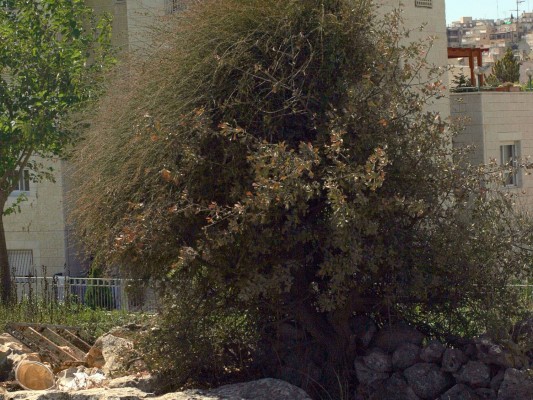 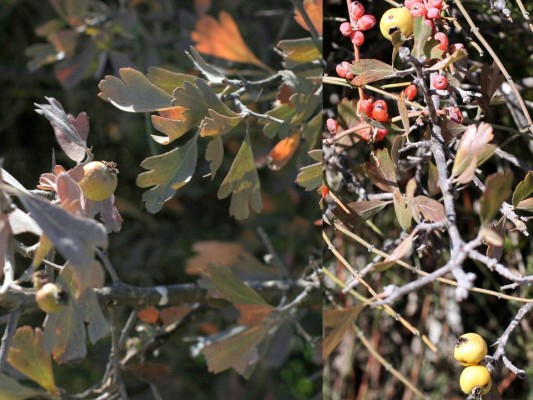 Fig. 2.1.17: The Crataegus (hawthorn) leaves have dissected tips and become reddish towards fall. The fruits (za'arur in Arabic), ripen at the end of summer and become palatable. 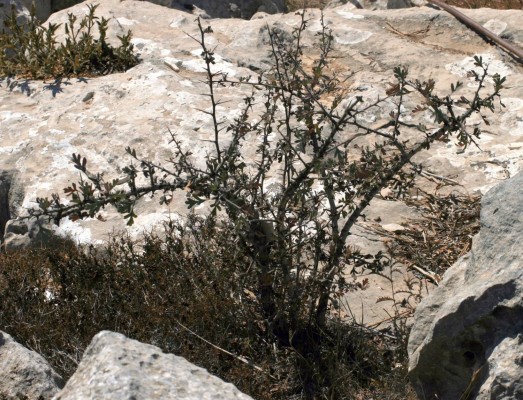 A small Crataegus aronia tree occurs in the eastern side of the reserve (Fig. 2.1.16). Many vines cover it, the most common of which is Ephedra foeminea. In the days when there were a lot of C. aronia trees, one could enjoy eating their ripe fruits (known as za'arur in Arabic) towards fall. There are places where C. aronia has developed into small spiny shrubs. The many small individuals emerging independently may be interpreted as root-borne shoots, a phenomenon well known in other parts of the country. The size of these shrubs may be related to their growth in a small rhizosphere.

Rhamnus lycioides grows as a small and spiny shrub despite its potential for developing into a tree. Its uniqueness is its ability to grow in small fissures and crevices in rocks. When growing, the expanding lignified roots break the supporting rock. The process of plant succession on rocks in the Mediterranean region can be seen here by the pioneer Chiliadenus iphionoides (Figs. 2.1.20, 2.1.21). As the rock fissures become deeper Rhamnus lycioides establishes itself in the crevices (Fig. 2.1.19) and this leads to rock deterioration. This, in turn, leads to the breaking down of the rock into separate boulders with soil accumulated between them. In the foothills of the Judean Mountains the process is more advanced and effective than in the Jerusalem area. 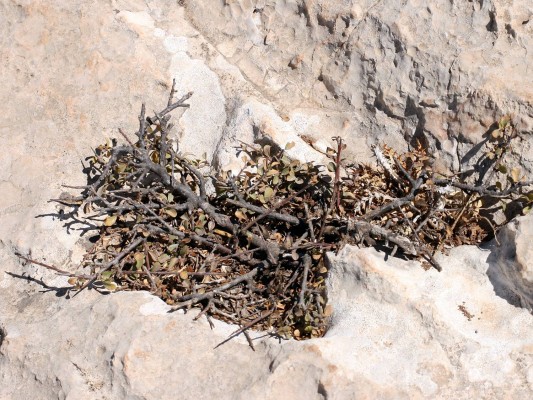 Fig. 2.1.19: A small Rhamnus lycioides shrub that developed in a narrow rock crevice. Such plants crack rocks in the Judean Foothills and the Lower Galilee. 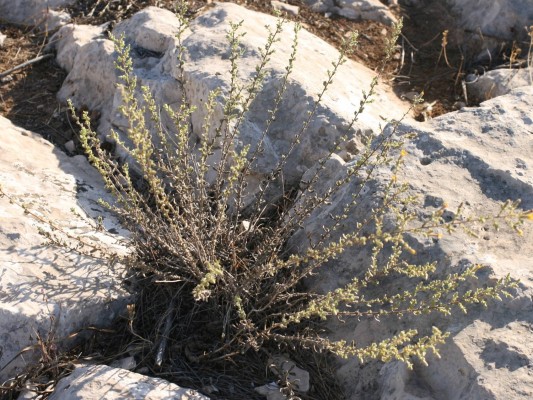 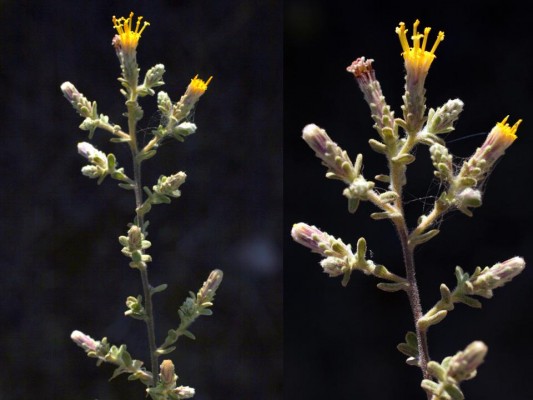 Fig. 2.1.21: An inflorescence of Chiliadenus iphionoides carrying many small flowers.