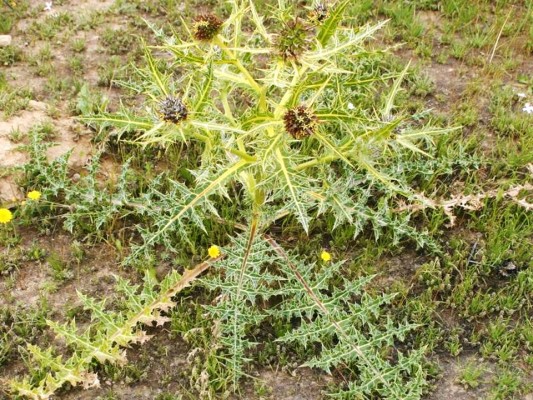 Thorns are regarded here as hard, sharp plant parts that may penetrate human skin and create wounds, or break away from the plant and remain in the body tissue. There are many thorny plants in the Mediterranean area and many researchers look upon thorns as an adaptation to long over-grazing pressure throughout evolutionary history. There are plant species with spiny leaf margins (Fig. 16.1.1), spiny stem leaves, involucral bracts of inflorescences, and stipules. There are also thorns that develop from special branches. In the present chapter I wish to consider thorns related to the "Crown of Thorns" mentioned in the New Testament. Several dozen woody thorns are kept in churches in Europe and are regarded as local treasures. My interest in the issue is to try and determine the botanical affinity of the thorns. This may indicate their origin and approve or reject their authenticity. This chapter is a continuation of my previous study (Danin 2006).

In 1997, when visiting my friends Dr. Alan and Mary Whanger in North Carolina, who introduced me to the Sindonology, I saw in their library a book by the French researcher Fleury (1870), in which he wrote about the instruments of the passion. Among other issues, Fleury studied the Holy Thorns he saw conserved in churches and monasteries in Europe. He displayed selected thorns in accurate drawings (Figs. 16.1.2, 16.1.3). I postponed studying this issue to a later opportunity. Fleury identified the thorns he saw as belonging to the genera Rhamnus and Ziziphus. In 1999, Alan Whanger coordinated for me a visit to two places in Rome. I brought with me a dissecting microscope from Jerusalem and checked three thorns resembling Rhamnus in S. Prassede and two in the monastery of S. Croce in Gerusaleme. I tried to compare the Holy Thorns to the Rhamnus lycioides thorns as I know them from the vegetation of Israel. The diagnostic property I searched for, following the features of the Rhamnus images on the Shroud, was the presence of lateral buds on the short branches (brachyblasts), terminating in a sharp tip. I did not find such buds on any of the five thorns I observed. I suggested to my hosts that they make a thin anatomical section and check it with a light microscope.

At the beginning of 2004 I was asked by Alan Whanger to provide botanical samples for an exhibition constructed by Arthur O. Tucker and his associates. The exhibition, entitled "The Botany of the Shroud of Turin, a Floral Crime Scene Investigation," was set up in the herbarium of the Delaware University. At Alan's request, I sent him, among other things, single thorny branches and larger branched stems carrying thorny branches of Rhamnus lycioides (Fig. 16.1.4) and of Ziziphus spina-christi (Fig. 16.1.5). Upon holding single thorns and pairs near his excellent photographs of the Shroud, Alan Whanger discovered the image of a pair of thorns with prominent bumps along the straight lines (Fig. 16.1.6). The pair of thorns and the single one near them are situated near the head of the Man of the Shroud (Fig. 16.1.7). The angle between the two thorn images is 1500 and they fit perfectly thorn pairs I sent from Jerusalem (Fig. 16.1.6). I approved his findings and when studying photographs of the entire Shroud at high magnification I discovered an additional two pairs of thorns and two single ones (Fig. 16.1.9). Altogether there are images of nine thorns of Rhamnus lycioides on the Shroud's photograph. In the geographical strip of land marked by the overlapping distribution boundaries of Zygophyllum dumosum, Gundelia tournefortii, Cistus creticus and Capparis aegyptia, the only shrub or tree with repeating branching angles of 1500 to 1550 is Rhamnus lycioides. 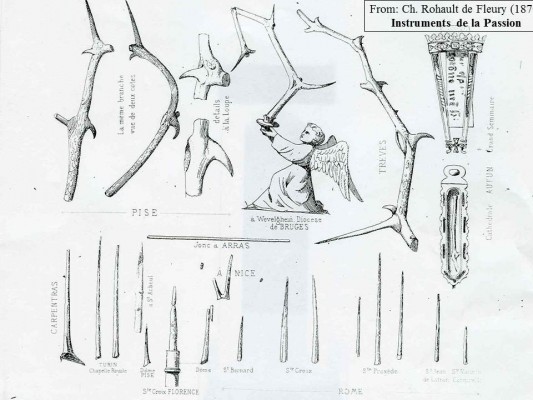 Fig.16.1.2: Drawings of holy thorns as seen in 1870 to the painter of Fleury's book. The upper row is of Ziziphus spina-christi thorns; the lower row resembling Rhamnus lycioides thorns 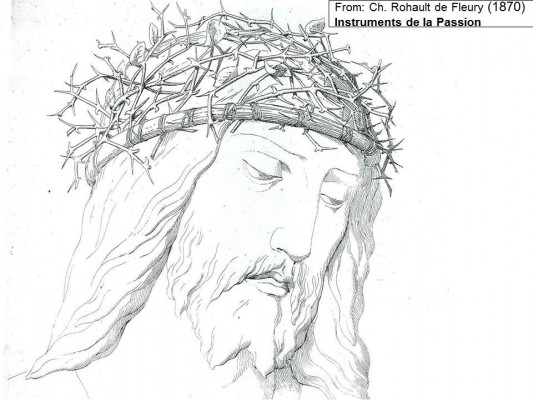 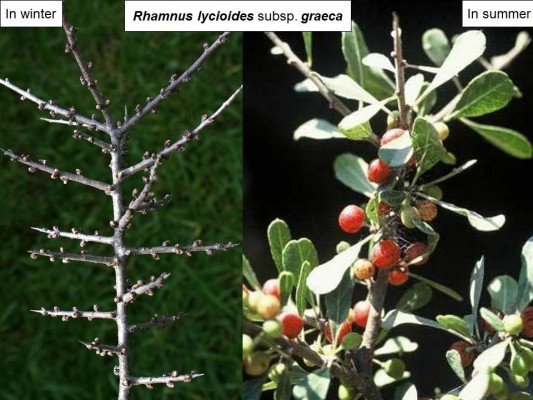 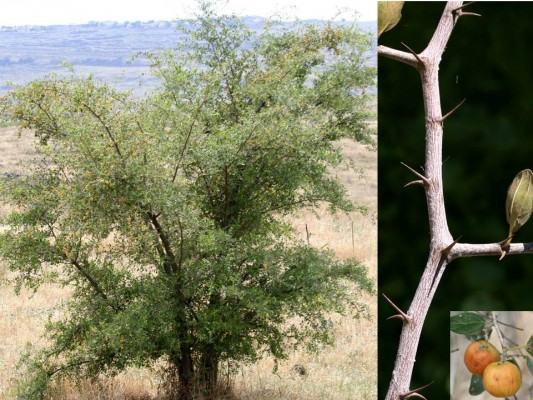 Fig.16.1.5: Ziziphus spina-christi; on the right – a close-up displaying a straight- and a hooked stipular thorns at the base of each leaf 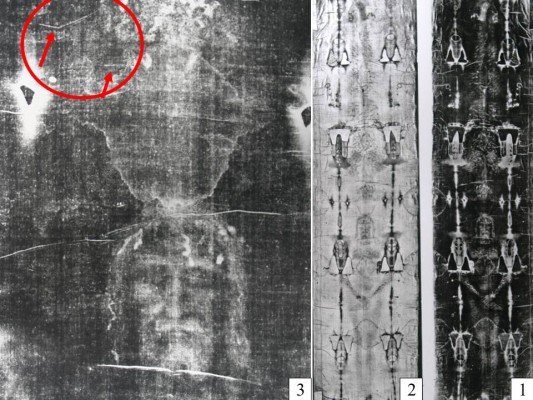 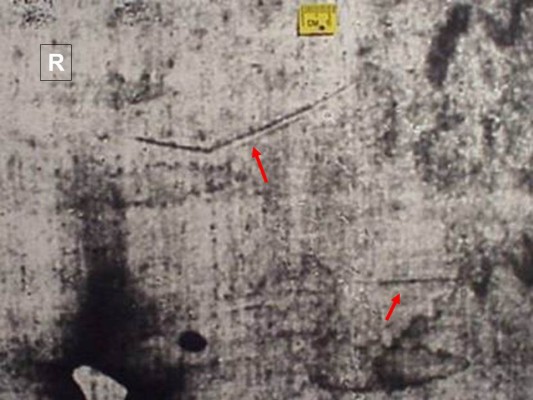 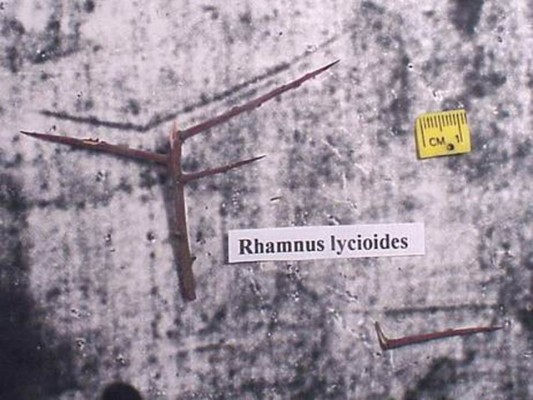 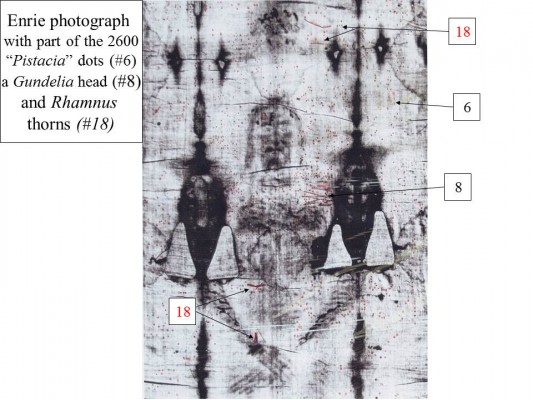 Fig.16.1.9: During investigation of Pistacia fruits additional thorns were found (marked with number 18) and a halo around the head of the Man of the Shroud